Groet in high school before the State Championship game. 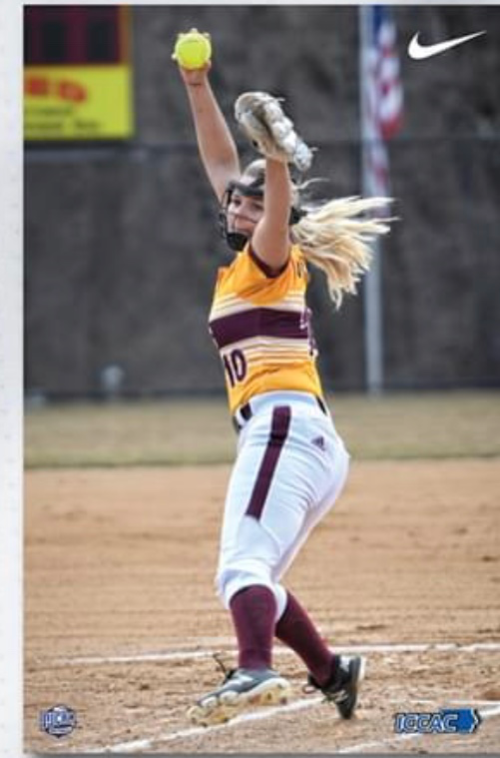 Groet in high school before the State Championship game.

OSKALOOSA — The Oskaloosa Herald catches up with Alexis Groet (Bear) who is now a student athlete at The University of Tennessee at Martin. She graduated from Oskaloosa in 2017.

At Oskaloosa High School, Groet was a five-time all-state selection, five-time all-conference selection and four-time all-region selection. She was also a part of the historic 2016 state championship and captain of the all-tournament team.

Groet is currently a redshirt/covid redshirt sophomore at UTM and plays softball for the Skyhawks. UTM is a NCAA Division One school located in Martin, Tennessee that plays in the Ohio Valley Conference. Martin is roughly eight hours away from Oskaloosa.

Before UTM, Groet went to DMACC and Indian Hills, however, DMACC just wasn’t the place for her.

“I went to DMACC before Indian Hills, but it was a bad place for me mentally and physically. The coach there convinced me to hang up my cleats and I ended up doing that,” Groet said.

The cleats weren’t hung up for long. Coach Diehl, head coach of the Indian Hills softball team spoke to Coach Harms, head softball coach at Oskaloosa High School, about recruiting some girls. Coach Harms mentioned Groet’s name, and that is when Coach Diehl gave her a call.

That phone call and a campus visit is how she ended up at Indian Hills.

“I decided that my talent was still there and would like to get a second chance of playing at the collegiate level, Groet said. “Coach Diehl helped me gain my love back for the game and become more of a student of the game rather than just a player.”

Her first year at Hills was a work in progress with getting to know her coach, players, and how to work cohesively as a team.

“My first season there was my best season of my career, Groet said. “Nothing but a great team to back me up on the mound and put runs on the board, and nothing but confidence and competitiveness on the mound.”

“I had one of my best games against State Fair at home where I struck out 21 batters that game,” she said. “I was named NJCAA Softball D1 Pitcher of the Week a few times in both of my years at Hills.”

As a team, the Warriors placed eighth at the National Tournament that year.

Her second year at Hills was off to a good start until COVID-19 hit.

“If I didn’t have so many college credits, I would have taken my extra year to play one more time for the Indian Hills Warriors,” she said. “I wish it was a four-year college and not a two-year.”

When asked what made her choose UTM after Hills, she said because it felt like home.

“When I went on my visit to UTM, it was my third visit I had taken and when I got here it felt just like home,” Groet said. “My host was one of the pitchers on the team and I spent both the night and day with the girls, and they brought me in right away. They made me feel like I was already a part of the team.”

She said picking to be a Skyhawk was the best decision because it’s her second home.

So far, she loves it at Martin because it feels just like home.

“It’s not the typical D1 university because It is so small,” Groet said. “It takes you only 5-10 minutes to walk to class and everything is walking distance.”

With COVID-19 hitting last year, she accepted the extra year and now has a total of 3 years of eligibility at UTM.

Groet said getting use to the differences between playing high school softball to college softball took some time.

“In high school, you have known everyone you played with your whole life, so you already have those bonds and connections with your teammates. In college, you are having to learn and create new friendships and learn how to play with one another,” she said.

She also mentioned that in college you are held more responsible and accountable for what you do.

Her favorite memory from high school was being a part of the team that was the first softball team in Oskaloosa history to make it to state, and also being the first girls sport to win a state tournament title for Oskaloosa.

“My favorite memory from Hills was our 2018-19 team being more than just a team, we were a family,” she said.

So far at Martin her favorite memory is meeting her new friends and getting the chance to start fresh at a new place.

The whole reason for Groet to play softball in college was because she had a dream to chase.

“I loved the game more than ever and it was considered my escape from everything in the outside world. Softball was and still is everything to me,” she said.

Her advice to younger kids who want to play a sport in college is to never stop dreaming.

“Never give up when you come across failure because that’s when you learn the most about yourself mentally, and the mental game gets you further than the physical standpoint,” she said.

She also said not to be afraid or ashamed of taking the JUCO route.

“I will say that going the JUCO route was one of the best decisions I have ever made when it came to playing softball,” Groet said.

Groet is majoring in the Interdisciplinary Studies at UTM in hopes to get her an education degree.