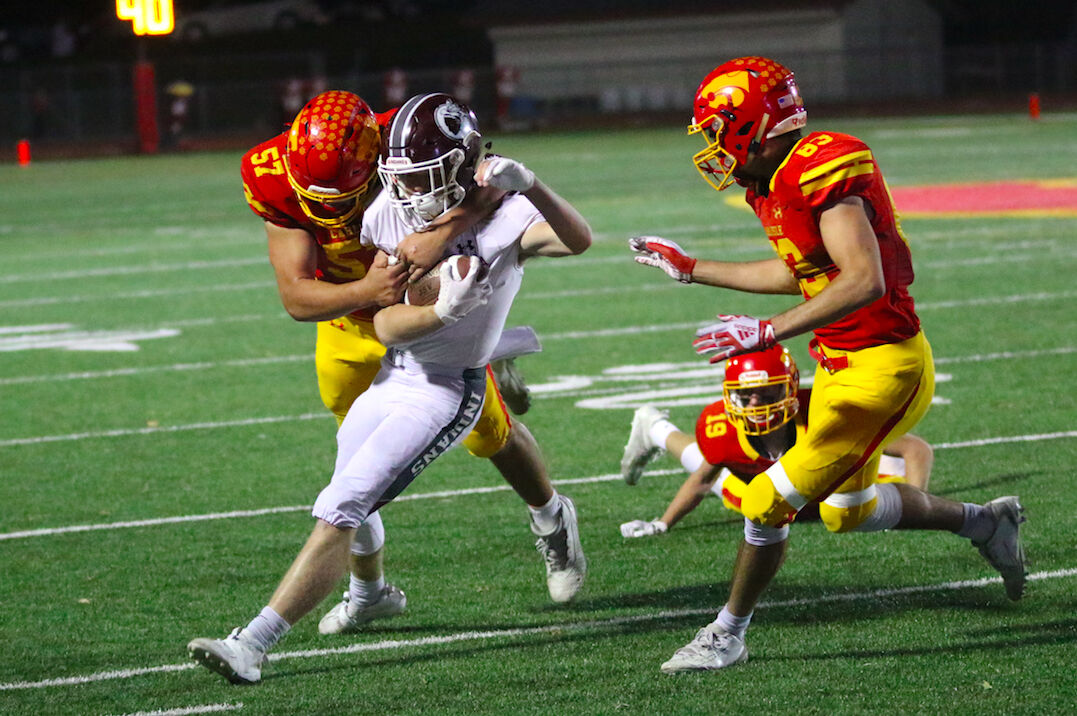 Oskaloosa's Andrew Else (7) is wrapped up by Carlisle defenders. 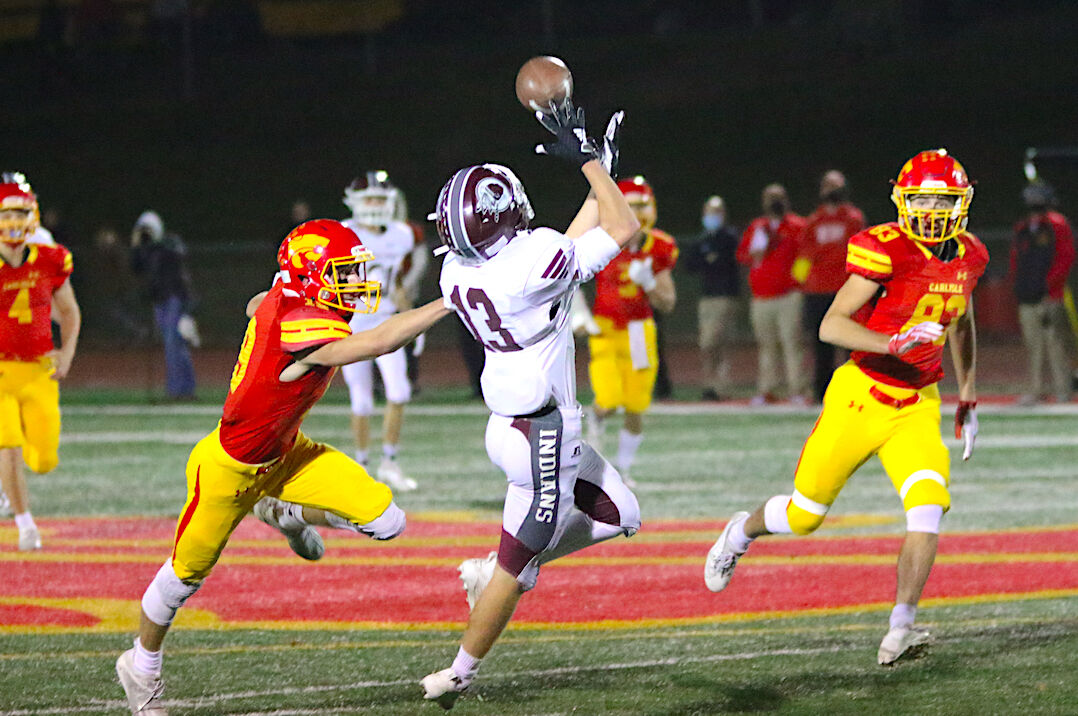 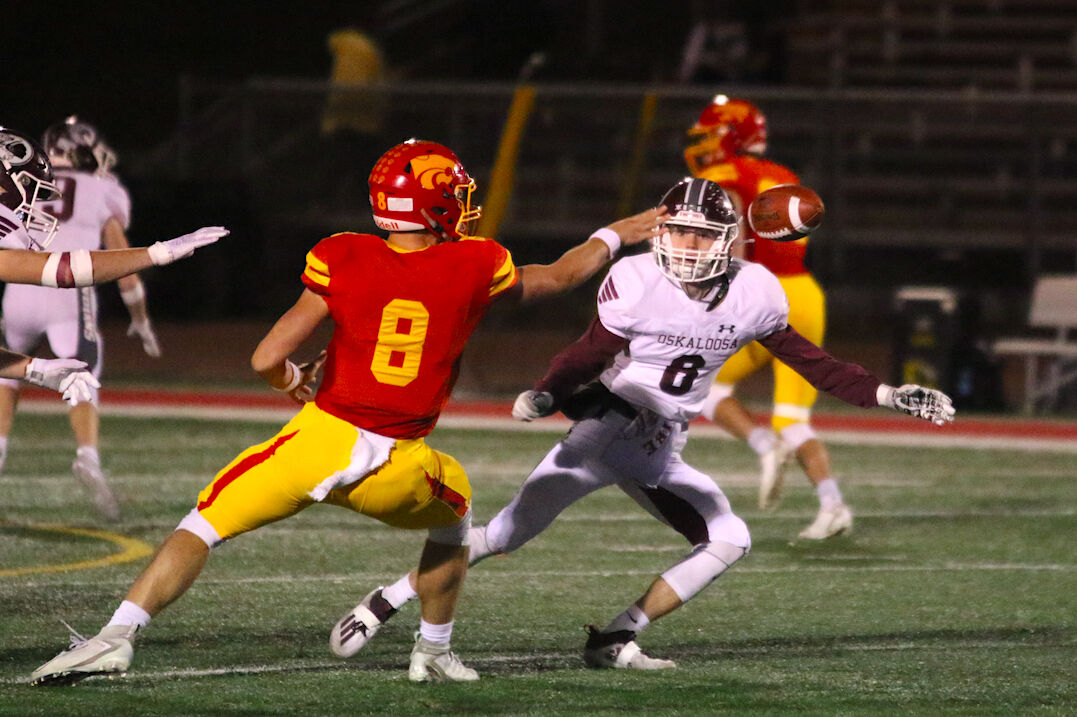 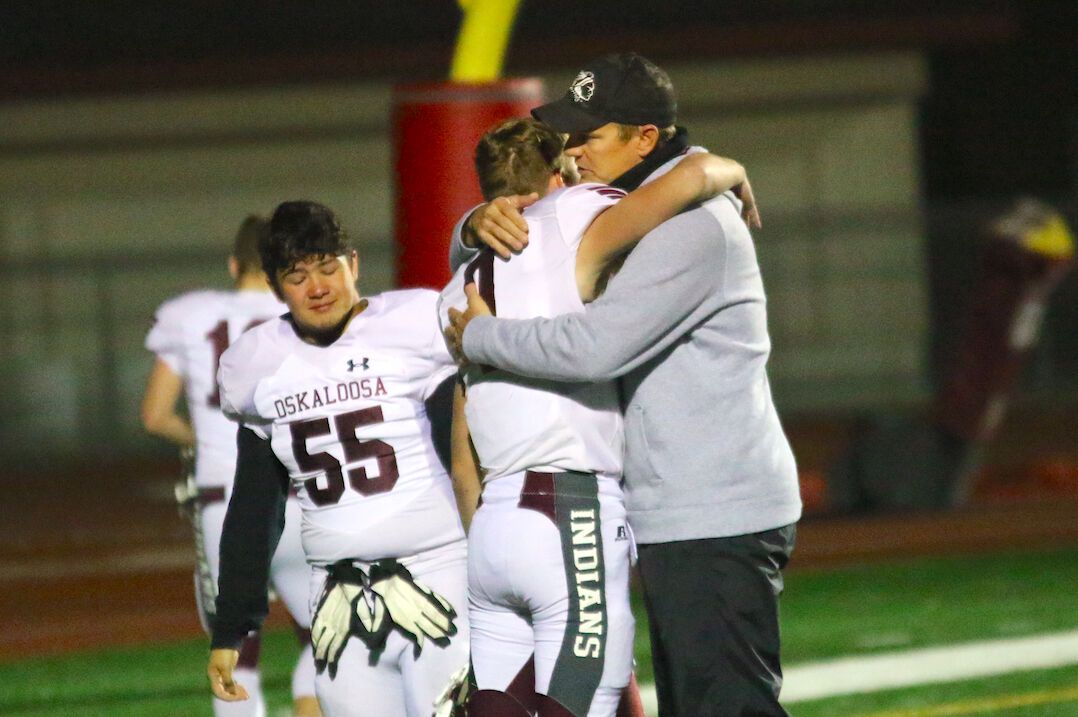 Oskaloosa's Andrew Else (7) is wrapped up by Carlisle defenders.

CARLISLE — The battle of the trenches are almost always key in a game, it was especially key for Carlisle as they dominated the line of scrimmage on their way to knocking Oskaloosa out in the first round of the playoffs behind a 56-6 victory.

It was a rough start for Oskaloosa, a penalty on the opening kickoff set up a short field for Carlisle but the Wildcats only needed one play to find the end zone on their first drive. Carlisle’s Jonathan Dunn received the pitch and ran 64 yards for the opening touchdown, putting Osky quickly behind 8-0.

Carlisle scoring on big runs early as they found the end zone on each of their next two drives on the second play of that drive. The Wildcats would lead 21-0 no even halfway through the first quarter after only running five plays on offense.

Carlisle runs the triple option on offense, a scheme always difficult to prepare for and Osky had problems stopping it all night, getting out-gained 412-22 on the ground.

“The triple option is tough,” Oskaloosa head coach Jake Jenkins said. “They run mid-line and veer which is the same stuff they run at William Penn. I use to run it and defend against it when I was there and it’s all about discipline. Who has the dive player, who has the quarterback, who has the pitch player. It’s as simple as that but when they are getting off the ball and double teaming so well it was just something we weren’t able to stop and I think you saw with those big plays.”

The Indians needed a good drive to right the ship and they did just that on the ensuing possession, going 82 yards on eight plays with Keaton Flaherty hitting Cooper Spry over the middle for a 19-yard touchdown pitch and catch to cut the deficit to 21-6.

Spry had himself a solid final game of his high school career, finishing with five catches for 77 yards and a touchdown to go along with two tackles and an interception (his fifth of the season) on defense.

Unfortunately that was Oskaloosa’s only score on the night due to limited success on the ground and drops in the passing game.

“We’ve been doing that a lot this year,” Jenkins said. “Sometimes we finish drives but a lot of times we’re shooting ourselves in the foot which is unfortunate because we can put together drives and score but we just keep shooting ourselves in the foot and you see the heads down and for the seniors it started to sink in that this is it. That’s not the way you like to see it end.”

Carlisle came back with a perfect pass from quarterback Karson Dunn, who dropped it in the bucket for Jacob Imhoff for a 66-yard touchdown.

It was a tough night for the Indian offense, who finished with 145 yards of offense including just 22 rushing yards on 10 carries. Keaton Flaherty completed 13 of his 21 passes for one touchdown and one interception.

The Oskaloosa defense had just one tackle for loss on the night. Leland Evans and Marty Knox led the charge with six tackles a piece.

The Indians now move into the offseason where Coach Jenkins hopes to see more weight room participation to even up the playing field against some of their bigger opponents.

“It is what it is as they say,” Jenkins said. “We can’t go back in time but we did the best we could game plan this year and we’ve coached this year as hard as we ever have and we didn’t get it done overall, which is frustrating. Moving forward, you have to have better weight room attendance and try to fix the things in the offseason so we have a better chance in the season to be a competitive team.”

Oskaloosa finishes the season with a 2-6 record. Carlisle advances to the second round where they will play Dallas Center-Grimes.