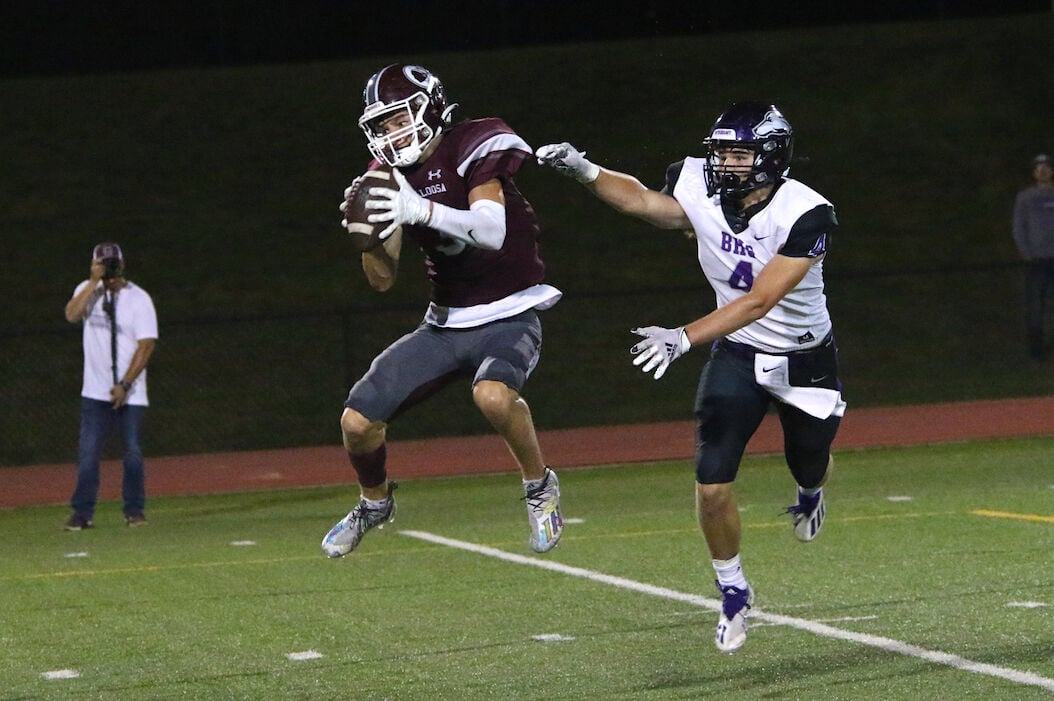 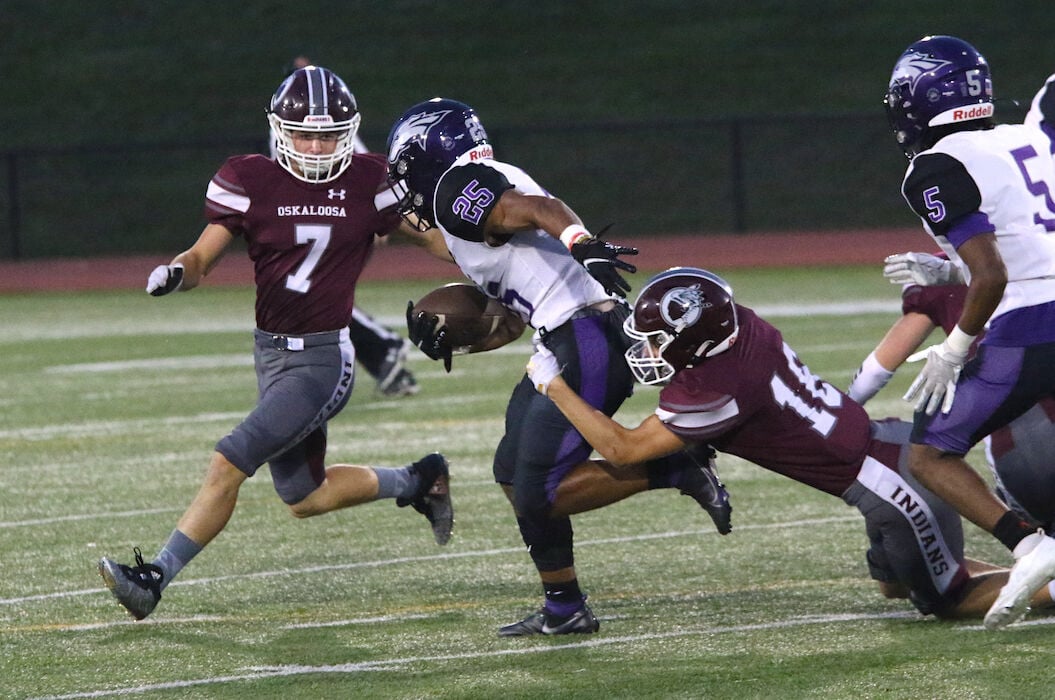 Oskaloosa's Ryan Hafner (16) and Eli Molyneux (7) try to slow down Burlington's Bryant Williams (25), who ran for 322 yards on the night 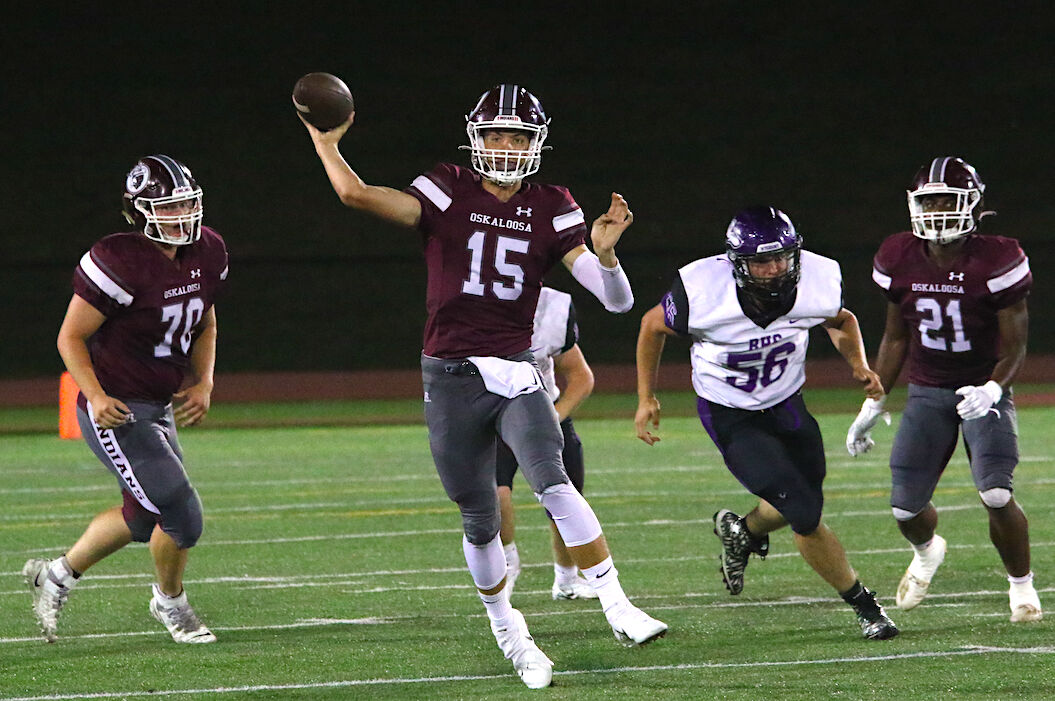 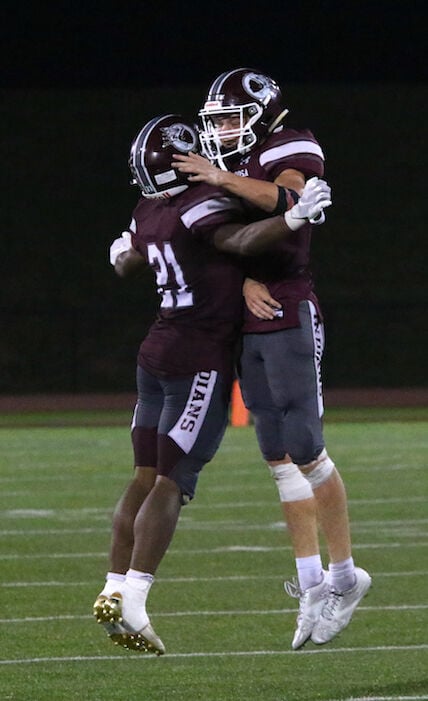 Oskaloosa's Ryan Hafner (16) and Eli Molyneux (7) try to slow down Burlington's Bryant Williams (25), who ran for 322 yards on the night

OSKALOOSA — Nothing like a one-score game coming down to the wire on a beautiful autumn Friday night at the football field. The Oskaloosa defense had to step up with their backs against the wall with time winding down and Burlington moving the ball down the field. But the Indians made their stand and held on for the 24-19 win over the Grayhounds to improve to 3-0 on the season.

“I said after the game congratulations guys, we just got to play a full football game,” Oskaloosa head coach Brett Doud said. “That's what football is all about, you should have to battle through the fourth quarter to win a game and that's why it was so fun tonight.”

The start of the game was a not a fun one for the Osky defense as they had the task of trying to slow down the ubertalented Burlington running back Bryant Williams. The 5-foot-8 senior didn’t waste much time as he took his second carry of the game 27 yards for the opening score to put Burlington in front, 7-0.

But just as it looked like the Grayhounds had the early momentum, Darryl Fane would return the ensuing kickoff 95 yards for a house call to quickly tie the game at sevens. A much-needed response and something the coaching staff has preached to their team.

“A motto that we bring to the table is ‘winners find ways to win, losers make excuses.’” Doud said. “We want to be the team that's going to grind and find a way to win and in that moment in the first quarter, they went down and shoved it down our face. For us to respond with the kick return, that shows that we have a great mentality and we're looking to compete.”

The rampant scoring would continue with Williams bouncing another toss play to the outside with nobody catching him as this time he would go 49 yards for the touchdown. A missed extra point would make it 13-7.

Early in the second quarter, Oskaloosa would get the ball near midfield after stuffing Burlington on a fourth and short. The Indians would quickly drive down the field with some great passing from senior quarterback Keaton Flaherty and catches from the likes of Cade Kelderman and Waylon Bolibaugh.

Flaherty did an excellent job of extending plays all night and was able to make a lot of big throws on the run.

“It starts with our hogs up front,” Doud said. “They were given Keaton a lot of time and Keaton's done a much better job with his footwork. He's walking up the pocket and giving our receivers a chance to work to get open and Waylon does a really good job of that.”

Flaherty showed that footwork by capping off the eight-play, 64-yard drive with a touchdown strike to Bolibaugh, who made an excellent over-the-shoulder catch in traffic for the 26-yard touchdown to put the Indians in front, 14-13.

Oskaloosa would force another Burlington turnover on downs and get the ball back near midfield. They would move the ball well again with it looking like Flaherty hitting Bolibaugh for another score put the play would come back on an Osky penalty. The Indians would have to move back and would eventually turn it back over on downs instead.

After forcing a Burlington punt, Bolibaugh would have a good return to around midfield as Osky would look to score again before the half. The Indians would get the ball to the eight but three straight incompletions once they got there would force them to settle for a Dawson Braden field goal attempt. The 25-yarder went right through and Oskaloosa went into the half with a 17-13 lead.

The second half started with Oskaloosa receiving and they would look to extend their lead. After a couple of good runs from Fane, the Burlington defense would bite on a play-action pass and Flaherty would hit a wide-open Bolibaugh over the top for a 31-yard touchdown to push the lead to 24-13.

Later in the third quarter, a great punt from Wyatt Grubb, who had two of his three punts downed inside the 10, as he pinned Burlington on their own eight. After stuffing Williams on the first running play, he slippery Grayhound running back bounced to the outside once again. This time no one would catch him as he scurried 93 yards for the touchdown to cut the deficit to 24-19 after a failed two-point conversion.

Williams, who came into the game averaging over 200 rushing yards per contest, finished with a staggering 322 yards on 24 carries with three touchdowns.

“That’s probably the best back we're going to face in years,” Doud said of Williams. “I've never seen a kid that was that versatile and that fast.”

The game would get a little sloppy from there as both teams dealt with injuries and penalties.

Oskaloosa would look to put the game on ice midway through the fourth quarter as they had the ball on Burlington’s seven yard line. But on a fourth and one, Osky would elect to go for it and it would backfire with a fumbled snap turning the ball over to Burlington with 5:22 to go.

The Grayhounds had a long way to go and a nonexistent passing game, which was 0-of-5 on the night. The game plan was simple, get the ball to No. 25 (Williams) and see if Oskaloosa could stop him.

Burlington would move the ball steadily down the field, converting a fourth and three along the way. But the Greyhounds would hit a speed bump as a illegal blindside block would push them all the way back to the 45 in what resulted as a 22 yard loss after getting it as far as Oskaloosa’s 23 yard line.

On a fourth and long with 36 seconds left, Braden would track down the Burlington QB and get the game-clinching sack to secure Oskaloosa’s third straight win to start the season.

“Props to Burlington, they got a good team,” Doud said. “They’re a physical team so that's why I'm even more proud of our guys because our defense really stood the test. I mean, it was gut check time a lot and they came up big.”

The defense came up big when Oskaloosa needed it and they were led by a big night from Colin Snitker, who led the game with 17 total tackles.

Offensively for Oskaloosa, Flaherty was 12-of-24 for 146 yards and two touchdowns. Both of those touchdowns were to Bolibaugh, who caught four passes for 93 yards. Fane continues to be a steady presence in the running game as he finished with 94 rushing yards on 18 carries. Adding up his receiving and returning yards, he finished with 208 all-purpose yards on Friday as he continues to impress.

“Darrell is always just waiting to go,” Doud said. “I love his energy this year and I'm extremely happy Darrell is on our side because he runs the ball really hard.”

Oskaloosa, who was receiving votes in the AP Poll prior to this game, may see themselves in the rankings as they improve to 3-0. They have one more non-district game before starting what could be a grueling district schedule. Until then, the Indians will just continue to grind.

“We're going to keep busting our butt at school in the classroom, that’s where it starts,” Doud said. “Then in the weight room and then the practice field. I told our guys if we do that, the game is going to take care of itself because you're developing discipline and you developing a winning mentality. We're just going to keep working hard and we'll focus on Keokuk and give them all of our attention and try to go 4-0 next week.”