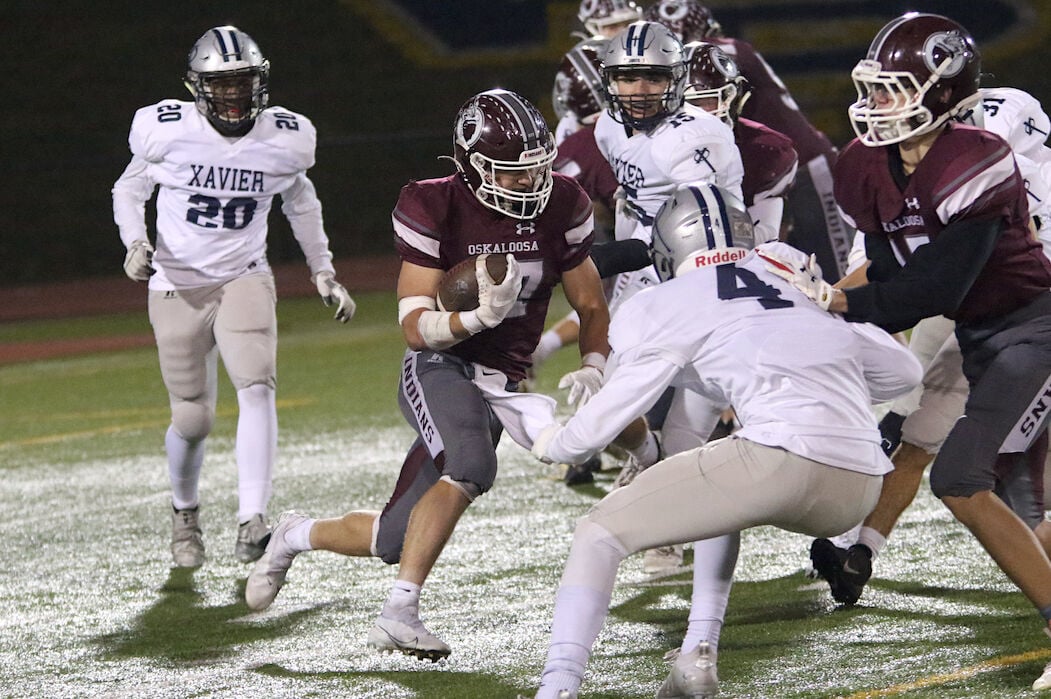 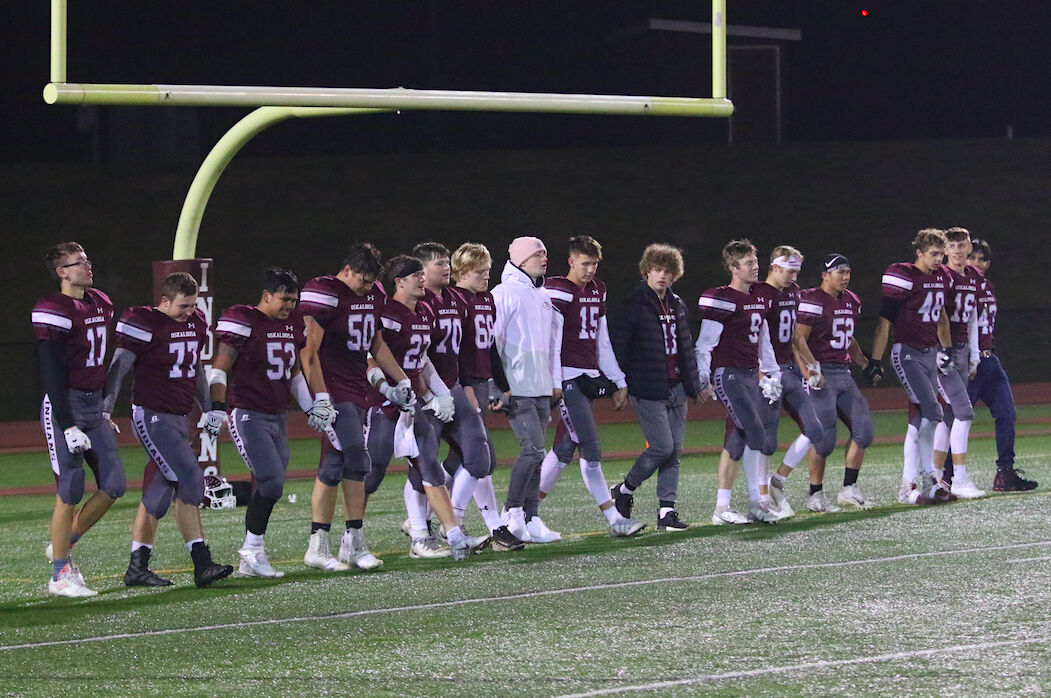 Oskaloosa seniors partake in the senior walk after the game 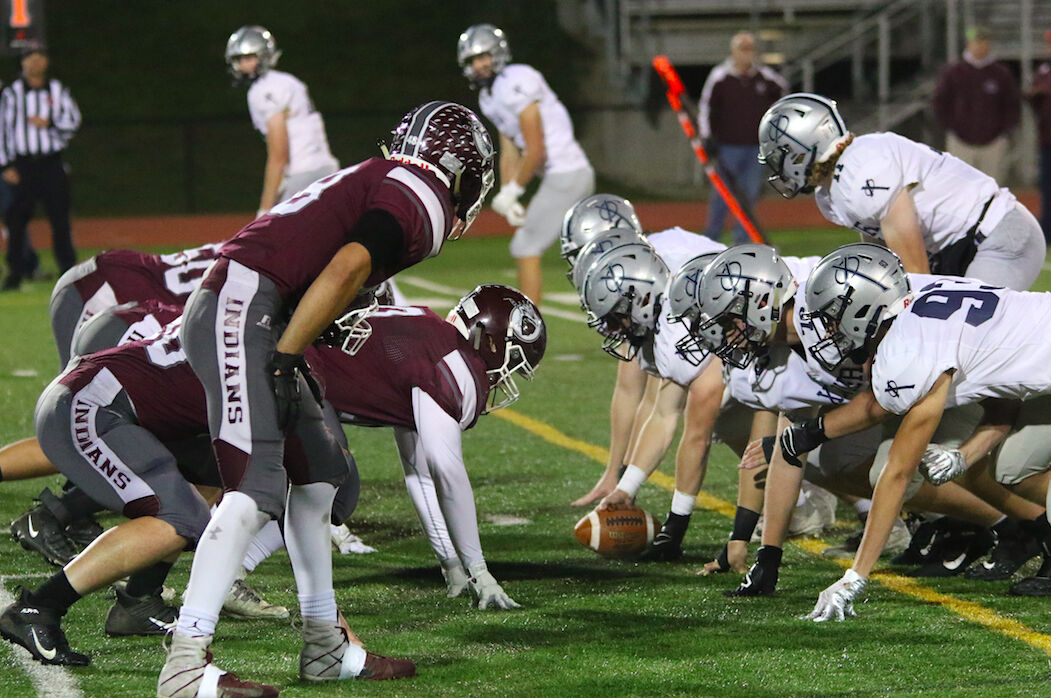 The Oskaloosa defense lines up against Xavier 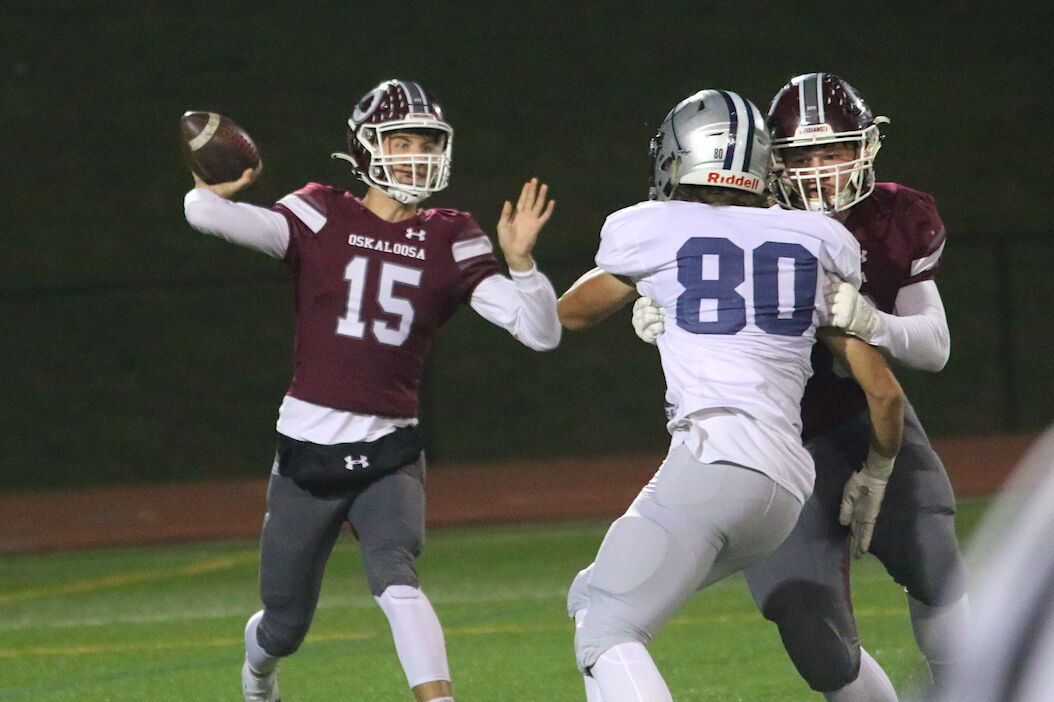 Oskaloosa seniors partake in the senior walk after the game

The Oskaloosa defense lines up against Xavier

OSKALOOSA — It was one last time under the lights at Statesmen Community Stadium this season for the Oskaloosa Indians as they celebrated senior night and welcomed No. 2 Xavier to town for their regular season finale. The Saints showed why they are looking for a trip to the dome in the postseason as they jumped on Osky early and went on to defeat the Indians, 38-14.

Oskaloosa got the ball to start the game and was able to get some positive momentum off their first play of the game as quarterback Keaton Flaherty hit Waylon Bolibaugh for 10 yards and first down. Unfortunately for the Indians, that was their lone first down for their first six possessions.

Xavier would lock in on defense and begin to go to work either forcing Oskaloosa punts or stops on fourth down.

The Saints would find the end zone four times in the first quarter with quarterback Alex Neal being responsible for all four of them with a trio of touchdown passes and a sneak from four yards out.

Xavier would increase their lead in the second quarter with a field goal along with a Josef Lemker pick-six to push the lead to 38-0 at the half.

The Indians were threatening to finish their season with three straight shutout losses and were in a tough situation as they got backed up to their own four yard line in the fourth quarter. Running back Colin Snitker would get a handoff and break it off the right tackle as he would shed a few tackles on his way to a 96-yard rushing touchdown to get his team on the board and spoil a potential third straight shutout for Osky.

After forcing another Xavier punt, Oskaloosa got the ball back and looked to find the end zone again. They would move down the field with Flaherty eventually connecting with Bolibaugh over the middle as the junior wideout would turn it upfield to go 33 yards for the touchdown to make it 38-14 and give the Indians some positive vibes to close out the season.

“It was almost like that feeling of when it's been cloudy for three straight weeks and all sudden the Sun came back out,” Oskaloosa head coach Brett Doud said. “We had some smiles going on and especially the senior guys like Colin, he’s put so much work in, to bust out a 90-yard run on his last night out here was pretty cool.”

Flaherty finished the game completing 15-of-37 for 156 yards with the one touchdown and interception. Bolibaugh caught seven passes for 84 yards. Snitker’s big run highlighted a tough night for the running game, which outside of that run finished with 23 yards on 11 carries. Snitker would also lead the defense with nine tackles while Eli Molyneux recovered a fumble.

For Doud, he finishes his first season leading the Indians in what was a tale of two seasons as Osky went a perfect 4-0 in non-district play before entering the gauntlet that was district play which made the Indians end on a five-game losing streak.

“It was kind of a whirlwind,” Doud said of his first season as head coach. “A lot of new things thrown at me, but I'm definitely willing to take on a challenge and move forward with it and just kind of organize my thoughts. Now that the season has wrapped up, it'll slow down a little bit and we can think about how and what we want to do. We start back up in the weight room in two weeks and we'll figure out what kind of team we want to be moving forward.”

The weight room is always an emphasis for any football coach but get his team bigger and stronger in such a physical game, but Doud also wants his players to not only dedicate themselves to football.

“Obviously the weight room is the first thing but I want to see all of our athletes going out for other sports,” Doud said. “You can tell a huge difference between an athlete that competes year around and an athlete that only plays one sport. They're just used to the moment and we need guys that are used to the moment and are used to competing. So hopefully they go out for other sports and that's what I'm going to preach to everyone.”

Oskaloosa finishes the season with a 4-5 record and will graduate 16 seniors.