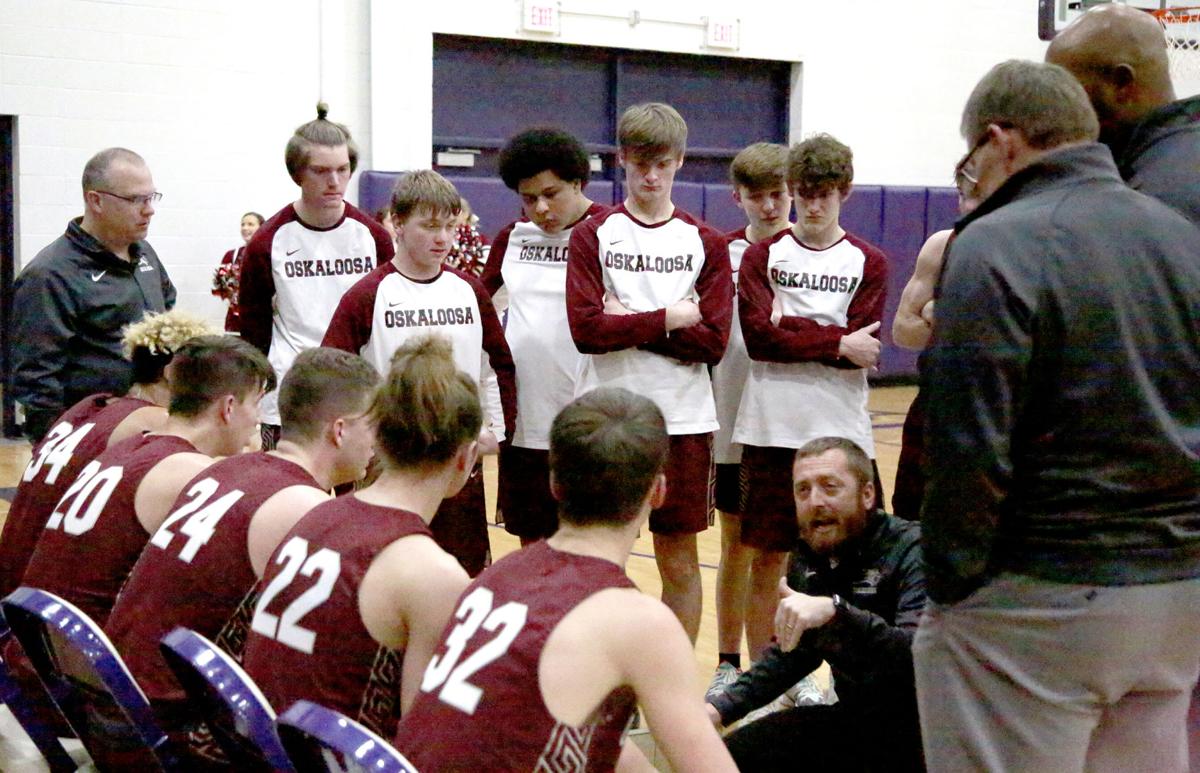 Oskaloosa head coach Ryan Parker returned to the bench Tuesday night at Indianola after recovering from a kidney transplant. 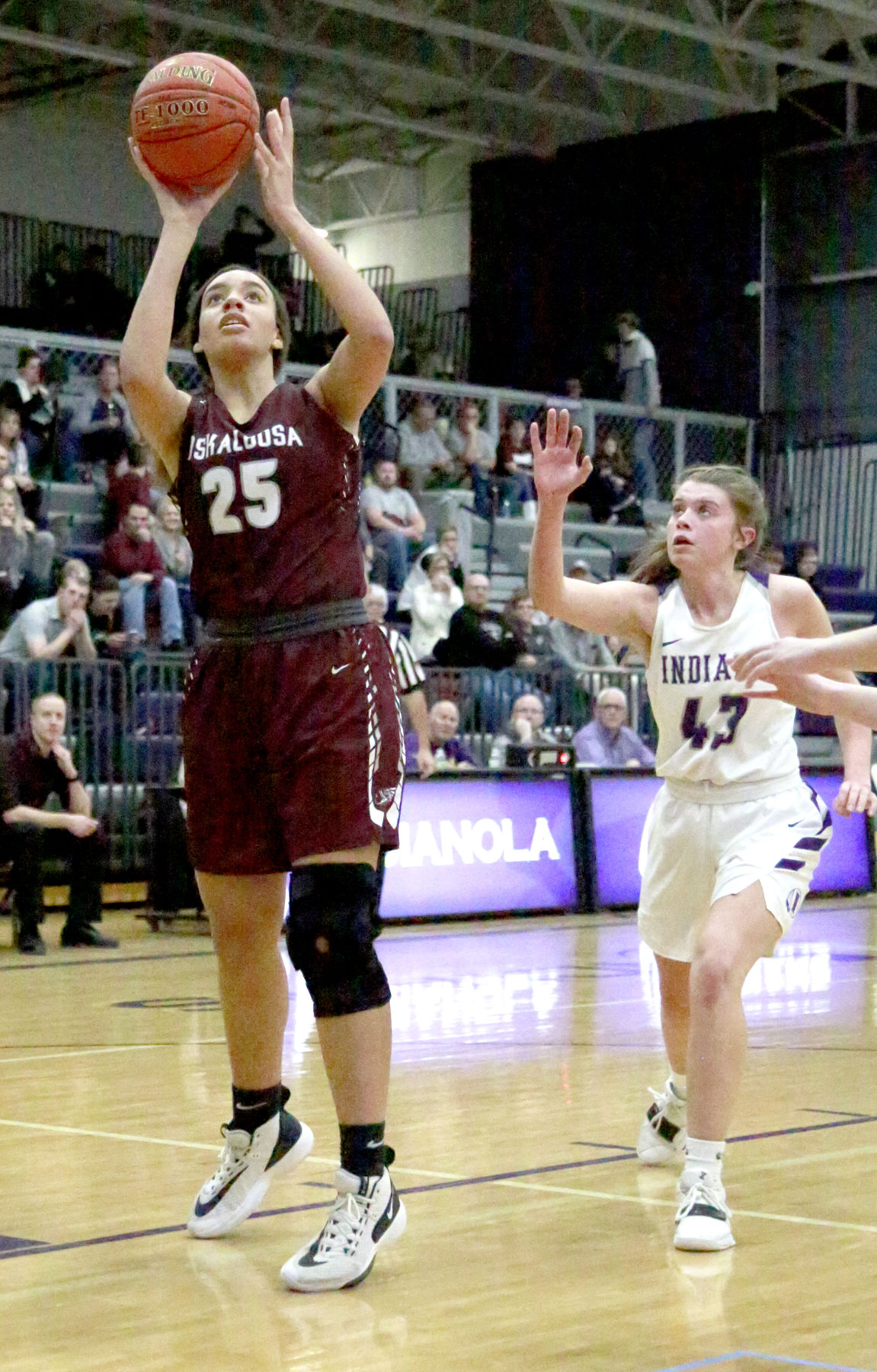 Oskaloosa head coach Ryan Parker returned to the bench Tuesday night at Indianola after recovering from a kidney transplant.

INDIANOLA—It was a rough return to the coaching bench for Oskaloosa boys basketball coach Ryan Parker Tuesday night at Indianola. Parker returned from a medical leave during which he had a kidney transplant, and Indianola spoiled Parker’s return by defeating Oskaloosa 87-47.

Donations, half going to the Parker family and half going to Indianola’s post prom, came from both Oskaloosa and Indianola fans who attended the game. Accompanying Renee Parker for the presentation at center court were the Parkers’ three children Taylen, Brady and Haylee.

Indianola came into the game with a 14-3 record (9-2 in conference play, one game behind Norwalk). They had won five straight games and 14 of their last 15. Indianola won the first meeting of the two teams 69-47, in a game where the Indians played without Xavier Foster and head coach Ryan Parker.

Foster controlling an uncontested opening tip was one of the only highlights for Osky.

The Indianola boys came racing out of the gate Tuesday night and scored the first three baskets to take the lead, and never took their foot off the gas in their 87-47 win over the Oskaloosa Indians.

Oskaloosa didn’t get on the board until almost three minutes into the first quarter, on a slam dunk by Xavier Foster. Indianola’s Caden Rehmeier answered with a 3-pointer to make it 11-4.

The Indianola Indians raced to a 18-7 lead 4 minutes into the game and ended the first quarter up 30-21. Foster scored 6 in the quarter, all on dunks. Oskaloosa only scored 3 points in the entire second quarter, and Indianola took a 53-24 lead into halftime.

Oskaloosa went on to score 17 in the third quarter but still trailed 75-41, but then only had 6 points in the fourth.

Foster led Oskaloosa in scoring with 12 points. Charlie North scored 11, Iszac Schultz and Keaton Flaherty each had 6, Reece Sarver had 5, Carson Genskow had 3, and Will Schultz and Colton Butler each had 2 apiece.

A.J. Toigo led Indianola with 25 points, all layups of free throws, followed by Rehmeier with 13. Drew Kingery and Tyce Johnson scored 11 each, while Blake Kennedy had 10. Luke Youmans scored 7, Dagan Martin and Tom Krapfl had 3 each and Cooper Nailor and John McGinnis scored 2 apiece.

Indianola, now leading the conference at 15-3, followed by Norwalk at 14-3, will next face Grinnell Thursday in Indianola. Indianola is also now tied with Dubuque Hampstead for 10th place in the most recent AP Class 4A poll.

The Indians are now 6-12 overall and 1-11 in the Little Hawkeye Conference. Oskaloosa will host Pella Christian tonight (2/13) in the Indians’ final home game of the regular season.

Indianola had previously beaten the Osky Indians 63-26, but the ball was bouncing the right direction for the Osky girls in the first half. Osky led 14-6 at the end of the first quarter

Indianola slowly made a comeback, and went into the locker room with a 21-20 lead.

Indianola’s Emma Kluver started off the second half with a 3 to put indianola up 24-20 and gradually the Indianola Indians began to pull away.

With two minutes left in the quarter indianola was up 9 and Lauren Blake had scored 12.

An Oskaloosa shot at the buzzer made it 42-37 and they were within five points after three quarters.

Indianola extended it to a 12-point lead on a three pointer by Kendall Clatt early in the fourth quarter, going up 49-37.

An errant pass by Emily Naughton gave Osky a chance to cut the lead to 7 with 3:30 seconds left, but a 3 by Clatt stretched the lead back to 10, and a layup by Lauren Blake pushed it to 12 points. She followed with a steal and returned it for 2 and Indianola went up 56-42 with 2:15 left in the game.

Turnovers plagued Oskaloosa through the rest of the game as Indianola came away with a 66-45 win.

Junior Amanda Fay led all Osky scorers with 18, while Mary Nelson had 10 and Pressley Blommers added 8.

For Indianola, Blake had 23 and Clatt scored 15 to lead Indianola. Mara Bishop scored 12, Kluver had 9 and Bailey Blake had 3. Emily Naughton and Alley May had 2 each to round out the scoring for Indianola.

The Osky Indians girls finish the regular season Thursday night at home against Pella Christian. And later on Wednesday (2/12), the Indians will find out who they’ll meet in the first round of the Class 4A playoffs.