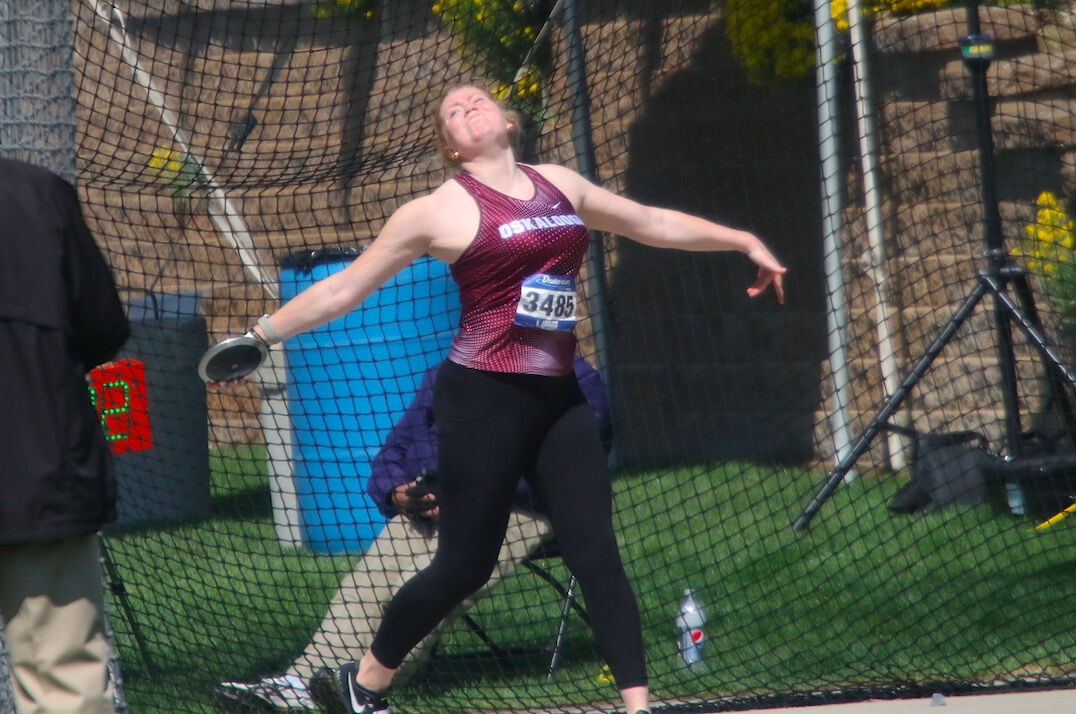 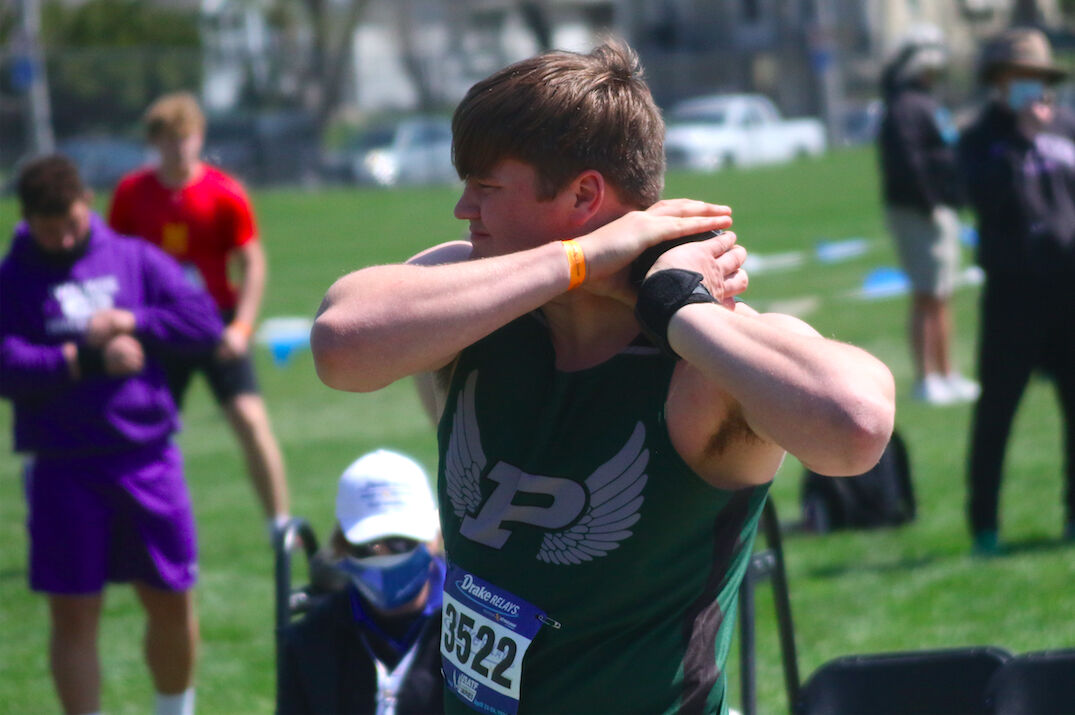 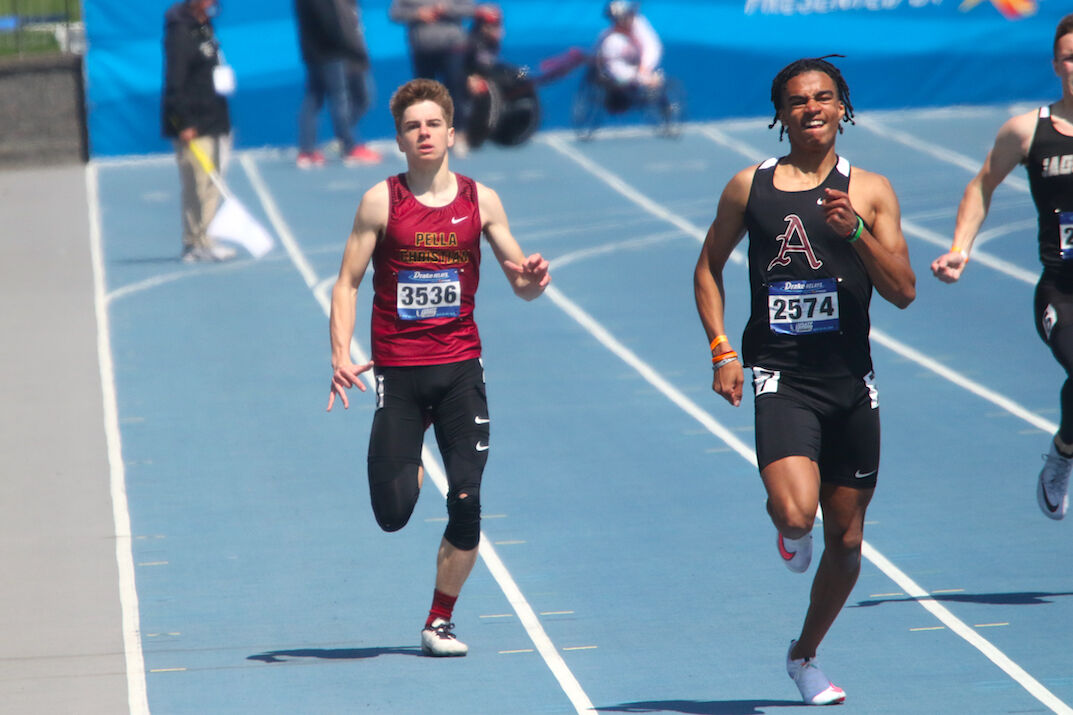 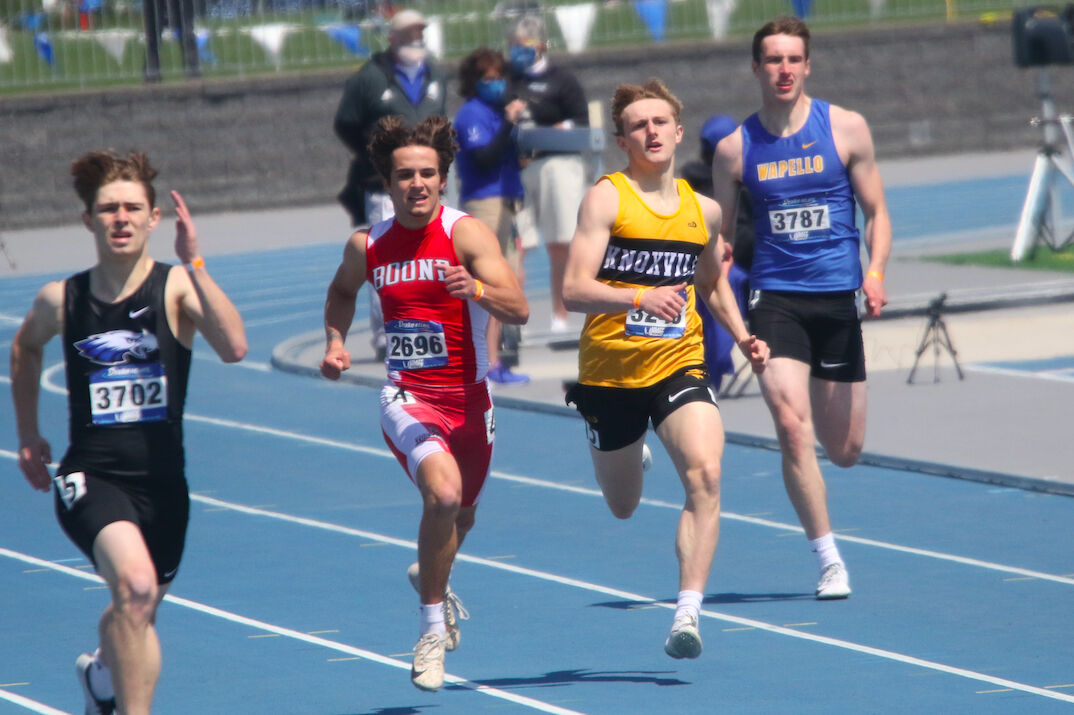 DES MOINES — Among the best of the best in the state, a pair of area athletes made themselves Drake Relays champions on Thursday. Oskaloosa’s Sophia Dykstra’s win in the girls discus and Pella’s Kody Huisman win in the boys shot put highlighted a busy day at the blue oval.

“It was awesome,” Dykstra said of competing at Drake again after placing two years ago. “Not having last year kind of made me want to work even harder and see what I could do this year, especially since my last year. I knew I wanted to go out with a bang and I did. I was just really hoping for some great weather and some great competitors, which I had, yeah I'm just overall so elated about everything.”

Dykstra started off a little nervous being back at the Drake Relays and this year she came in as the favorite with the best throw in the state.

The nerves may have effected her on her first throw, a scratch, but not on her second throw as it was the eventual winning throw of 140-1, more than 10 feet than second place to help her become Oskaloosa's first Drake Relays champion in 25 years. She joins Sarah Dykstra, who serves as the team's assistant throws coach as the only other Oskaloosa girl to win at Drake.

“It was kind of nerve wracking at first, I scratch my first throw,” laughed Dykstra. “It's always a little nerve racking because you're like ‘oh no.’ Hitting that second one, I knew I was good. From there I knew I had a good base to build off of and so that just kind of calmed me down. I mean I've been excited and energetic the entire time, but that kind of calmed my nerves of having to perform and stuff.”

Dykstra wasn’t alone in representing Oskaloosa, Faith DeRonde also threw for Indians, taking 13th with a throw of 118-1. Dykstra and DeRonde have been going one-two at most meets this season and the two cherished having a chance to compete together at the Drake Relays.

“It's amazing,” Dykstra said of having DeRonde at Drake with her. “I know we both say this every single time, we wouldn't be as good as we are if we didn't have each other on the same team. She pushes me in practice, I push her. She does some stuff that I don't do, I do some stuff that she doesn't do so we just kind of build off of each other and it's absolutely awesome to have another teammate right up next to me.”

The two later threw in the shot put in the afternoon. This time it was DeRonde coming with the big performance as she took third (ranked seventh coming in) with a throw of 40-1.50, just half an inch off her personal best. Dykstra improved with each throw and took 16th with a throw of 36-5.

The two will likely be back next month for the state meet where they will try to eye a state title to add to their already impressive year.

“I'm just hoping for more PRs for me and Faith and everybody else in the state as well,” Dykstra said. “I'm just so happy that we have a season here especially since we didn't have one last year. I'm just really excited to see what everybody can do for the rest of the season and hopefully have a great state meet as well.”

The other big winner of the day was Pella’s Kody Huisman. The Dutch senior entered with a season-best throw putting him in eighth in the state. Huisman would leave with a Drake Relays championship and the new season-leading throw.

Huisman grabbed the lead with his first throw of the day at 57-9. He would eagerly watch his competitors the rest of the competition until he knew for sure that he was the winner. With the win in the bag, Huisman went all out on his last throw and just for fun, improved his winning throw to 58-7.

Huisman then competed in the discus where he once again saved his best for last as he improved his previous throw by almost 13 feet, measuring in at 177-5 to take third and leave Drake with a pair of top three finishes. Not bad for the North Dakota State football commit.

Oskaloosa also competed in a couple of other events on the day.

Prior to jogging over just in time to start warmups for the discus, DeRonde joined Jordan Czerwinski, Aby Thompson and Maleah Walker in the 4x100 heat races. The Indians would finish a close fifth in their heat and take 30th overall with a season-best time of 51.76.

"Since the record keeping for the team that started in 1994, this is the most events ever qualified for the Drake Relays for the girls team," Oskaloosa girls track and field head coach Betsy Luck said. "The work that these girls are putting in is top notch. I couldn't be prouder of these ladies! As a coaching staff, we are looking forward to seeing where the rest of this season takes the entire team."

Pella had a couple of individual races. Tony Schmitz had the best finish, taking third in the 800 with a time of 1:57.18. Schmitz jumped out to a good lead after the first 200 and would hold that until the last 200 where Ames’ Aniey Akok kicked it into gear for the win.

Huyser also raced with Nolan Clayberg, Brandon Winegardner and Josh Warner in the shuttle hurdle. The Dutch clipped a couple of hurdles and would take eighth with a time of 1:02.16.

The Dutch quartet of Josiah Wittenberg, Miller, Chase Lauman and Schmitz raced to a fifth place finish in the 4x800 with a time of 8:04.16.

Lauman then anchored the group of Quinn Gruver, Reece Thoreson and Jackson Roozenboom to a 20th in the distance medley with a time of 3:46.20.

The Pella boys then wrapped up the day in the 4x400 with Rozenboom, Kenson Fuller, Miller and Schmitz as they finished 22nd with a time of 3:30.80.

The Lady Dutch also put together a couple of good races. The highlight was the 4x100 of Melanie Reynolds, Roselande Vanderhoff, Marissa Hackman and Emily McMartin.

The quartet took fourth in the heat races with a time of 50.25 to put them in the finals. There they would improve their time with a sub-50 and season-best time at 49.64 and take fifth.

The group of Abby Warner, Vanderhoff, Kerndt and Jacie Trine were the first race of the entire day as they would finish 18th in the sprint medley with a time of 1:54.18.

Schelhaas raced in the open 400 and looked good with a sixth place finish and a time of 49.51.

Kieren Nichols was Knoxville’s lone competitor on the day. The senior Panther would sprint to a ninth place finish in the 400 with a time of 50.31.