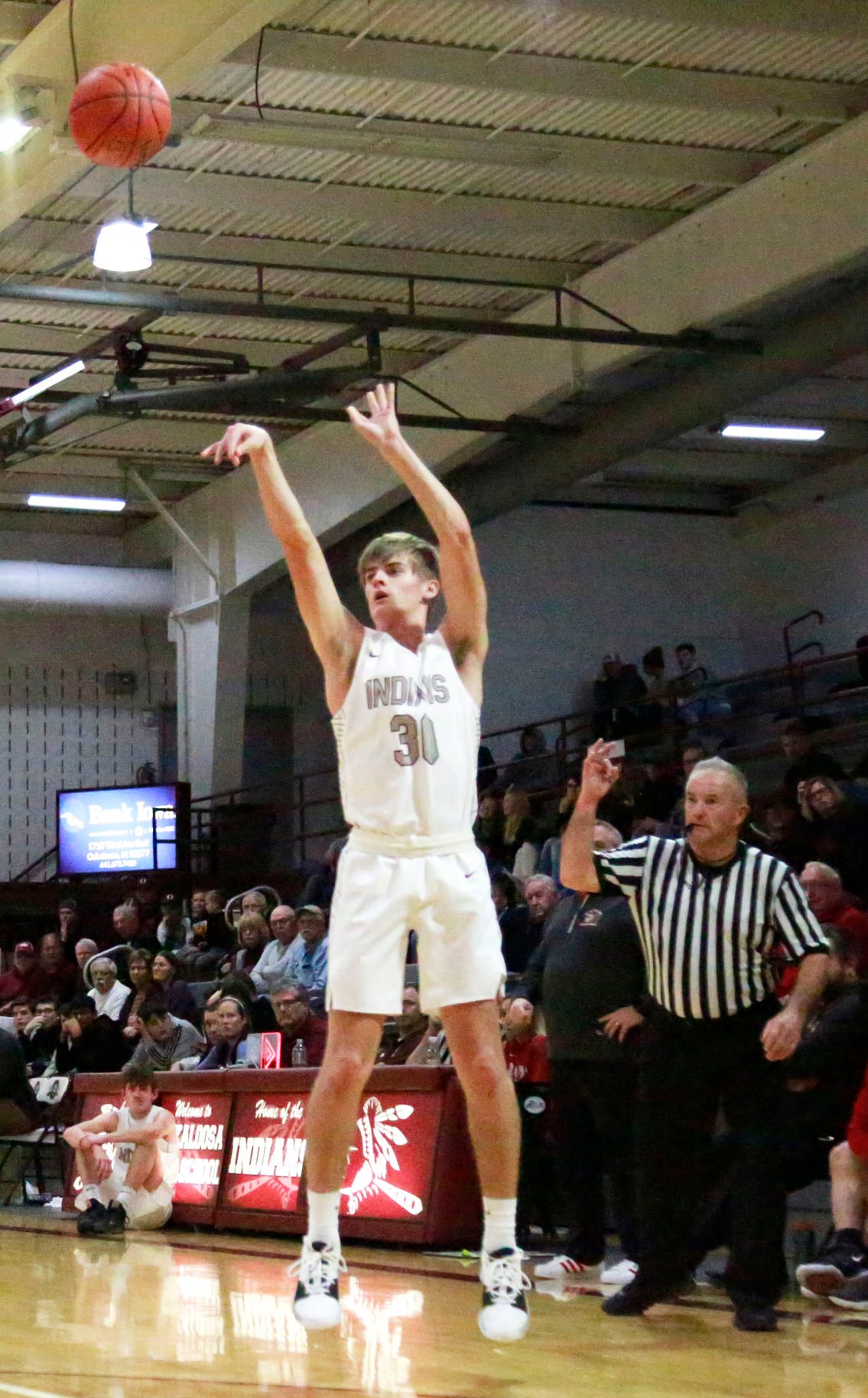 David Nelson hits a three pointer during the second quarter of the Indians’ 83-36 victory against Centerville Tuesday night. 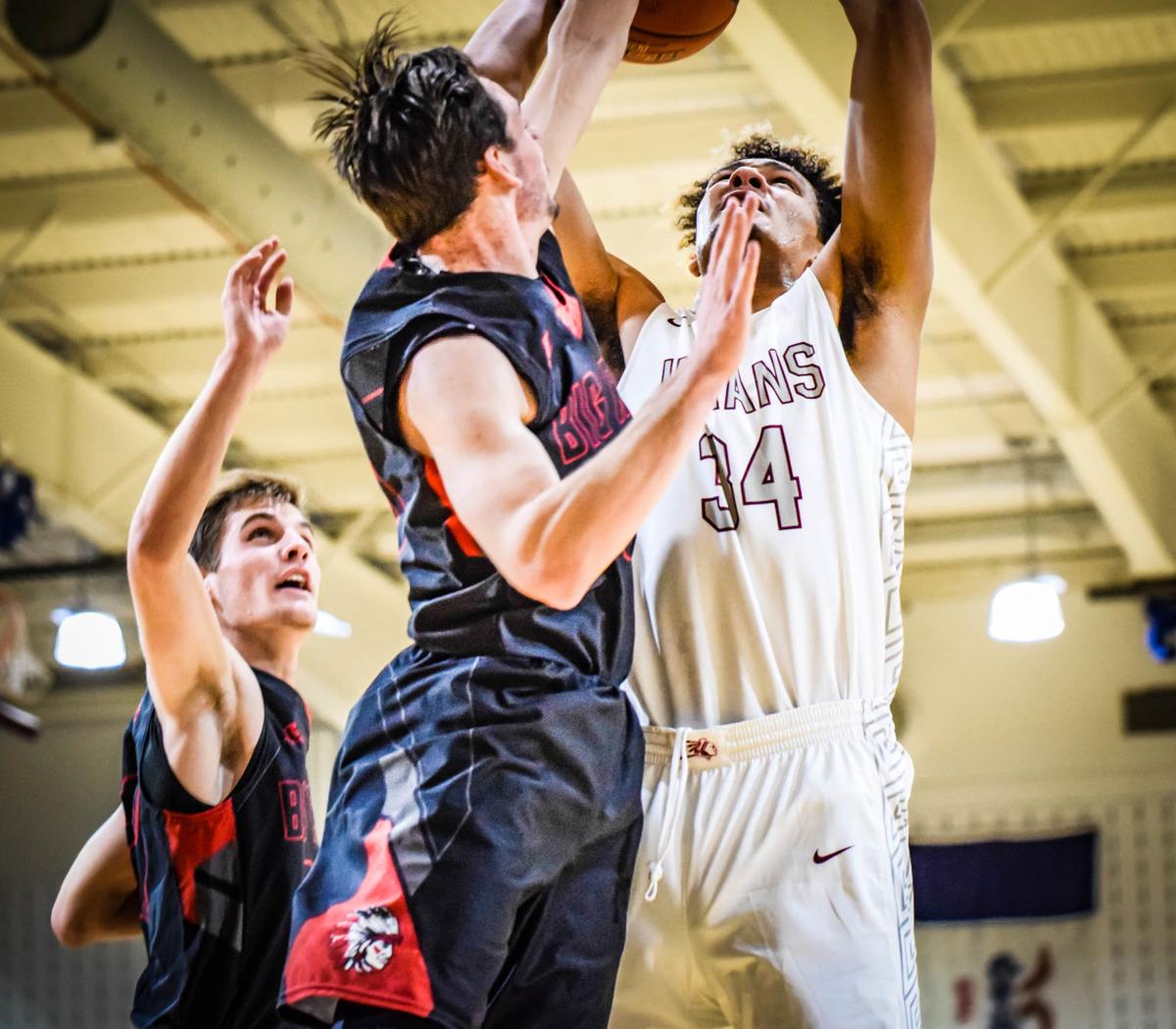 Xavier Foster goes after a rebound during Oskaloosa’s home matchup against Centerville on Tuesday night.

David Nelson hits a three pointer during the second quarter of the Indians’ 83-36 victory against Centerville Tuesday night.

Xavier Foster goes after a rebound during Oskaloosa’s home matchup against Centerville on Tuesday night.

OSKALOOSA—It was raining threes at Oskaloosa Gymnasium Tuesday night. The Indians came ready to play, and ready to shoot, against Centerville in their home game matchup. Oskaloosa ran away with an 83-36 victory against the Big Red, who dropped their record to 2-2.

The Indians were coming off a tough loss to Grinnell, and Centerville featured two impact players in Matt McDonald, who averages 24 points per game, and Quinton Koestner, who averages 18 per game. But the Indians found a way to slow them both down and climb back into the win column.

The Big Red came out early on defense in a 1-3-1 zone, but the Indians hit six three-pointers in the first quarter, including four of their first six shots.

The threes kept coming in the second quarter, with two by David Nelson and another by Keaton Flaherty, to give Oskaloosa nine total threes as they ran out to a 43-22 halftime lead. The Indians also tightened up on defense in the second quarter and only allowed Centerville to score four points in the last four minutes of the quarter.

It took until the 5:54 mark of the third quarter for a Big Red player other than McDonald or Koestner to score points. Brady Kauzlarich hit a 6-foot baseline jumper to break that drought.

Oskaloosa tallied 20 total points in the third, including a nice fast break assist from Flaherty to Foster for a dunk at the 1:15 mark.

Waylon Bolibaugh, Carson Genskow and Mason Barnhart each came in off the bench to begin the fourth quarter, joining Flaherty and Darryl Fane. Dalton Deney also came in for Flaherty with 6:14 left in the game.

Each of the bench players had a chance from long range in the last five minutes of the game. Bolibaugh hit two consecutive threes, Deney added two and Fane also collected two. The Indians finished the fourth quarter having outscored Centerville 20-5.

“Our guys played really well in the second half after I challenged them at halftime. We made shots tonight and that makes things easier all the way around. Our plan is still always to play inside out,” said Foster.

Centerville was led offensively by McDonald with 16 and Koestner with 13.

Oskaloosa, now with a record of 2-1, plays at Dallas Center-Grimes in a conference matchup on Friday.

Coach Foster said, “We will have to defend well Friday, because DCG has two very talented guards.”