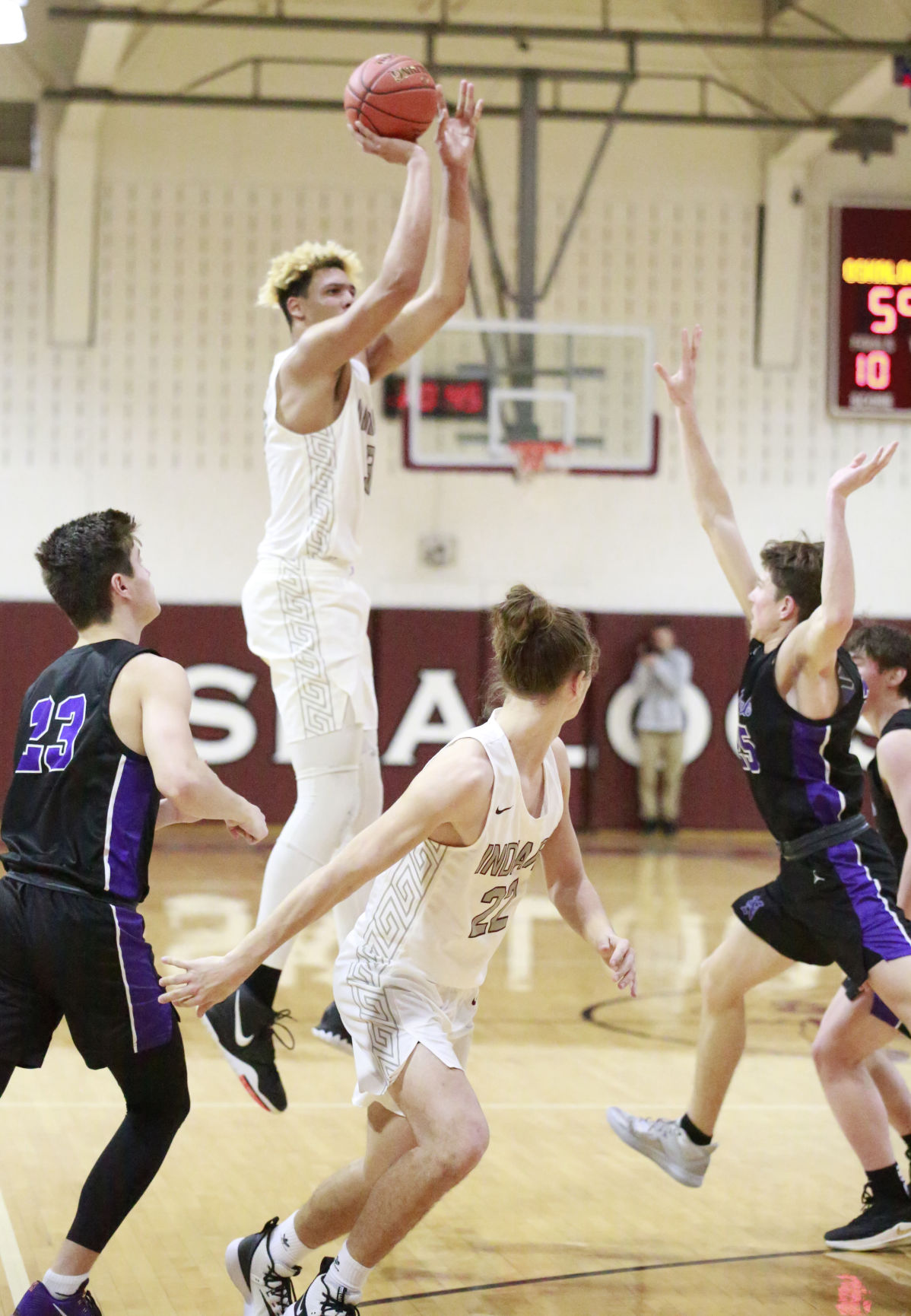 Xavier Foster scored 36 in his return to the Indians lineup Tuesday night against Norwalk.

Keaton Flaherty drives to the basket against a Norwalk defender in Tuesday night’s game at Oskaloosa Gymnasium.

Xavier Foster scored 36 in his return to the Indians lineup Tuesday night against Norwalk.

Keaton Flaherty drives to the basket against a Norwalk defender in Tuesday night’s game at Oskaloosa Gymnasium.

OSKALOOSA—Xavier Foster looked more than ready to return to the lineup for the Oskaloosa Indians boys varsity basketball team Tuesday night against Norwalk.

However, the Warriors also came prepared to face that challenge.

The Indians hosted the Warriors in a rematch of last year’s Class 3A title game and a battle of the state’s top two senior basketball prospects in Xavier Foster and Bowen Born.

After the dust settled, Born and the Warriors walked away with a 73-64 win. Born, Norwalk’s point guard bound for Northern Iowa, finished with a game-high 49 points. He came into the game averaging 36.3 points per game, a state best. Foster, Oskaloosa’s Iowa State-bound senior, scored 36.

Both teams have finished their seasons going deep into the state tournament the last two years. So these games almost always live up to the hype.

This game was a back-and-forth battle right from the tip; a basket-for-basket battle between Foster and Born.

Oskaloosa came out with intensity on both ends of the floor, and by the time the Indians had surged to an early 19-9 lead in the first quarter, Foster had scored 17 and Born had scored 7.

By the halftime buzzer, the Indians were up 33-32 and Foster had 20, while Born had surpassed him with 26.

The third quarter saw more of the same, with a see-saw battle and Foster and Born trading punches. About mid-way through the third quarter, Foster drilled a 3-pointer on the fast break to put the Indians up 43-40. Born then answered with a transition 3 of his own on the very next Warriors possession.

By the waning minutes of the third quarter, Norwalk started pulling away and they entered the fourth quarter with the lead 52-49. The Warriors never relinquished that lead.

Iszac Schultz scored 11 on 5 of 9 from the floor, and had four assists to go with four rebounds and one steal. Noah Van Veldhuizen also scored 8, Keaton Flaherty added 7 and Charlie North had 2.

Aside from his 49 points on 15 of 31 from the floor, Bowen also sank all 15 of his free throws and had two steals.

“We got to see two of the best players in the state going back and forth at each other,” said Oskaloosa head coach Ryan Parker after the game. “That’s the best 32 minutes of basketball we’ve played all year, and I was pleased to see that our guys came ready to give maximum effort.”

The Warriors improve to 5-2, while Oskaloosa falls to 4-4. The Indians will next face Pella Friday night on the road.

This was the last game of the season for coach Ryan Parker, as he will be stepping away to undergo a kidney transplant.