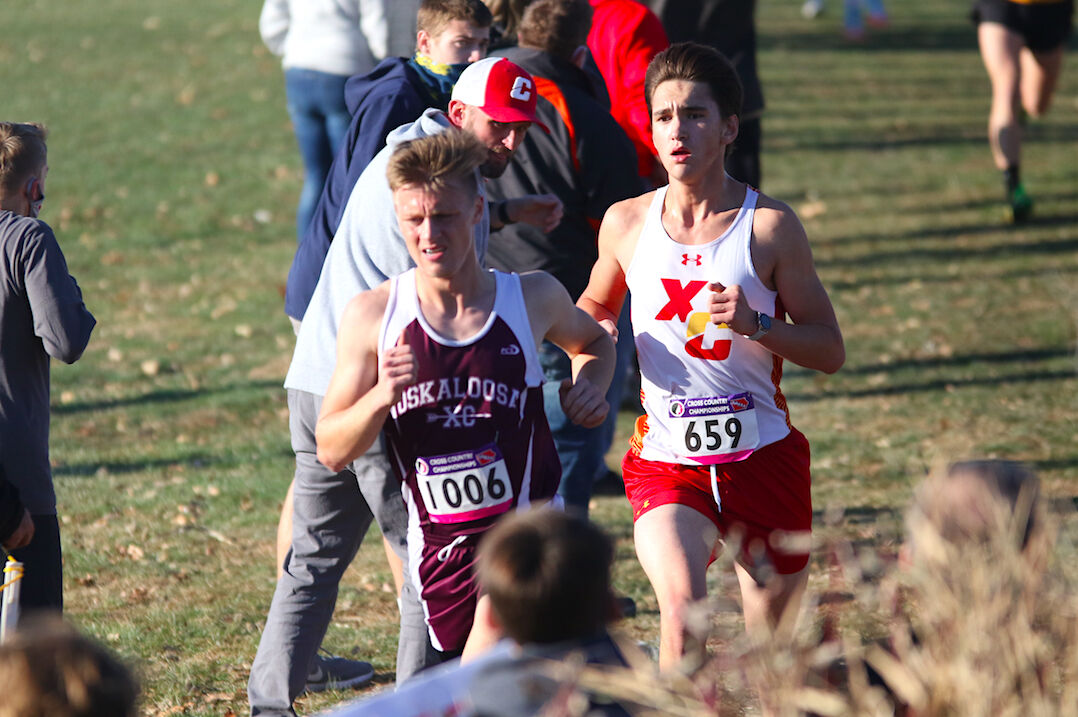 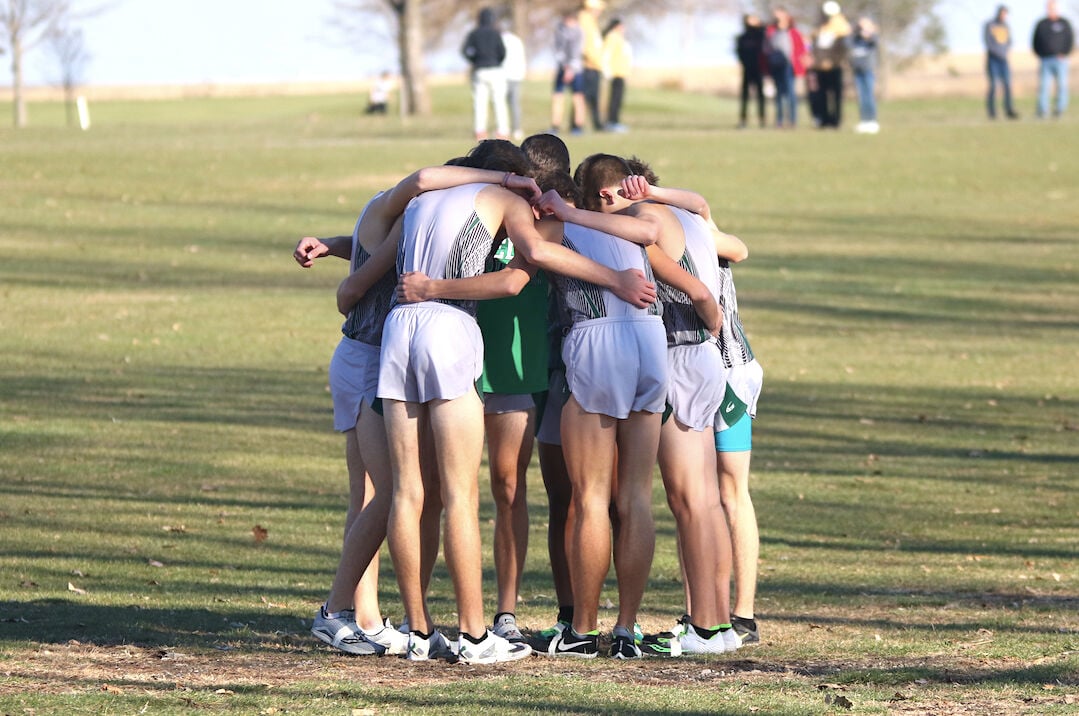 The Pella Dutch boys team huddles before their race. 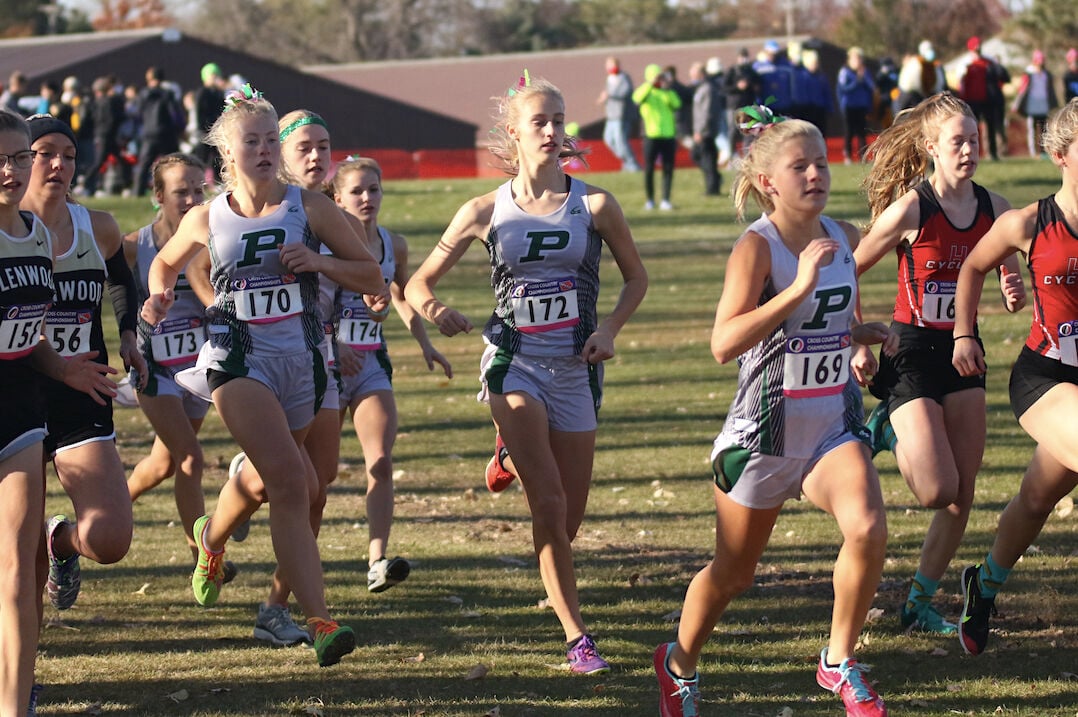 The Pella Lady Dutch race off the starting line. 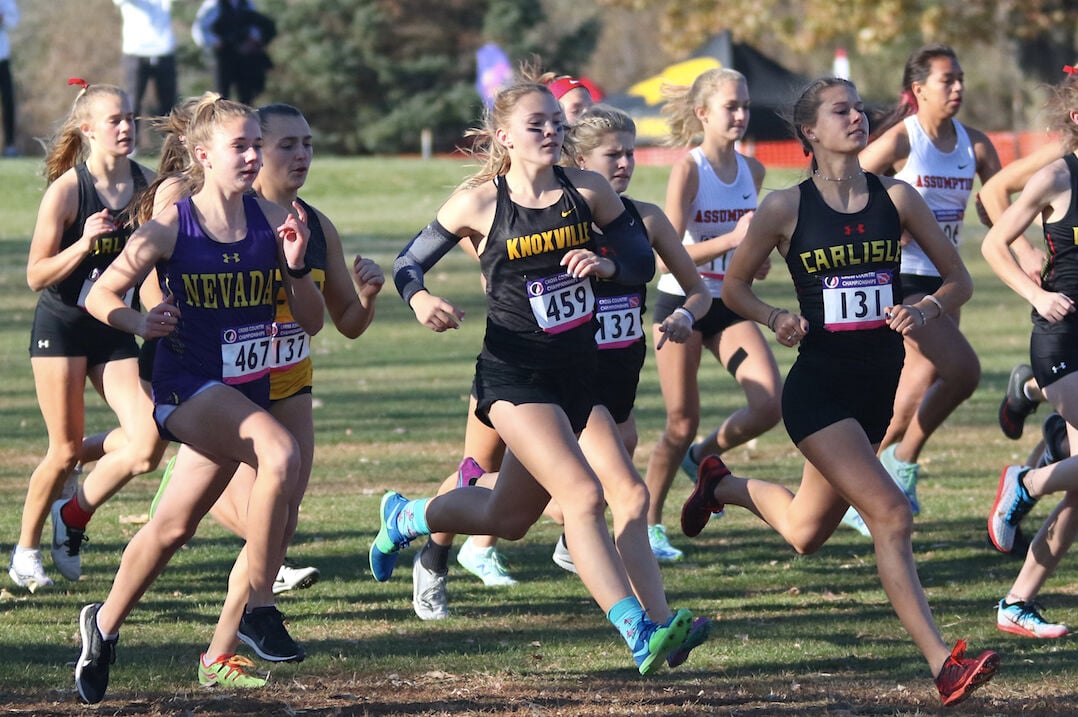 Knoxville's Norah Pearson (459) in the pack at the start of the race. 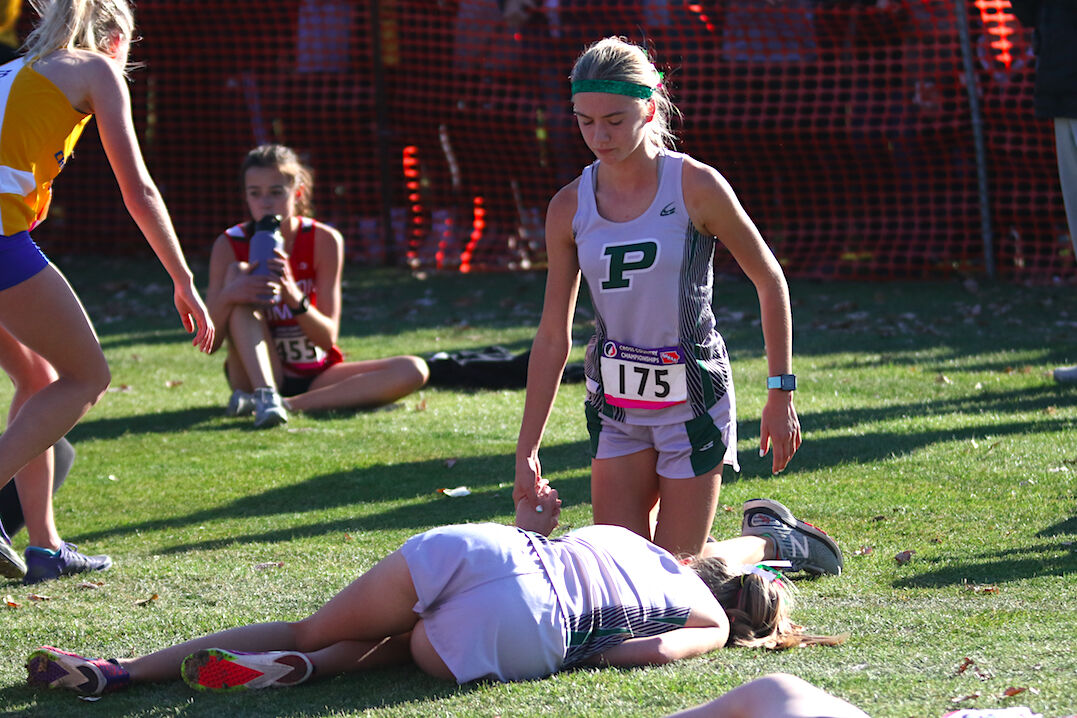 Pella's Jacie Trine (175) and Abigail Cutler (laying down) after finishing their races. 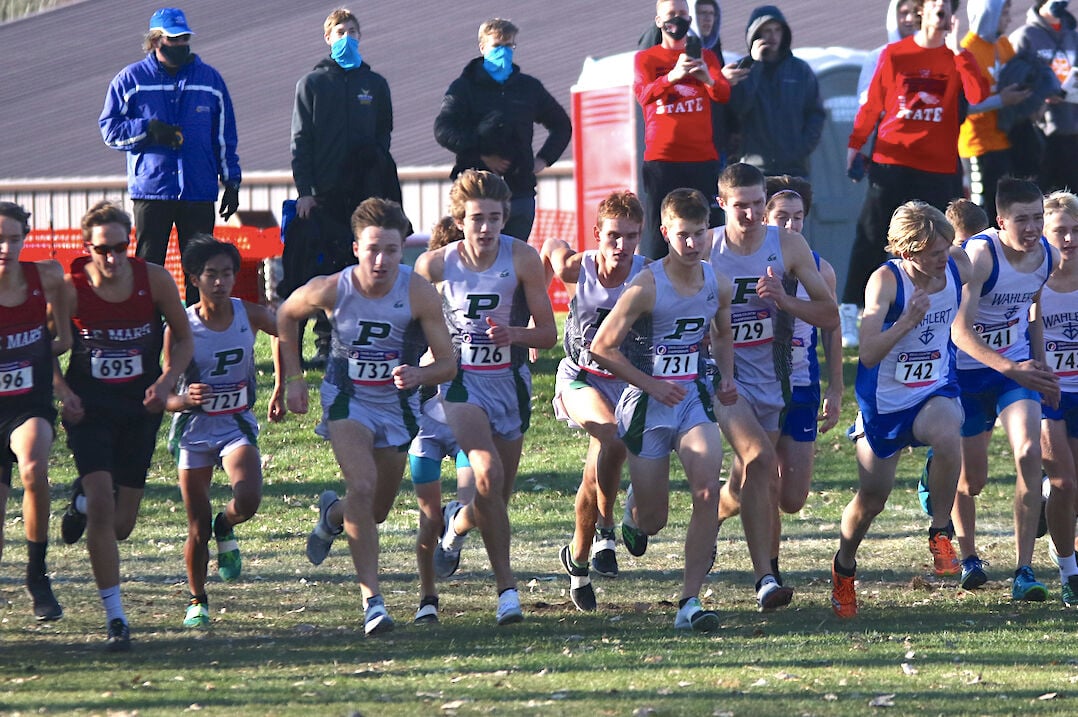 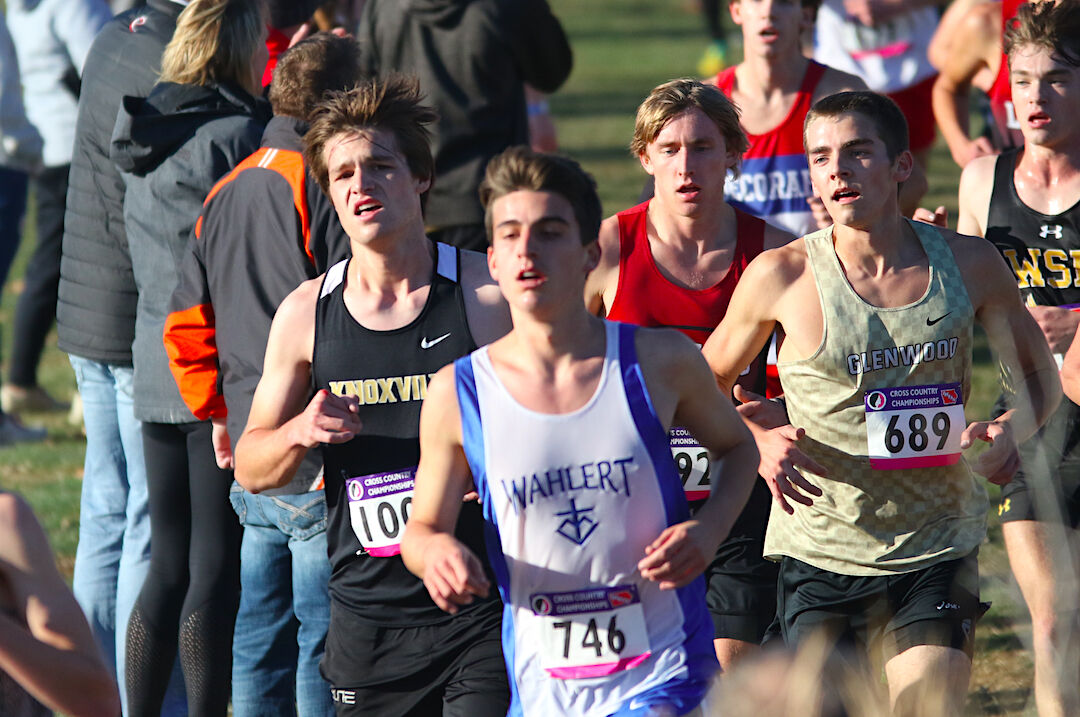 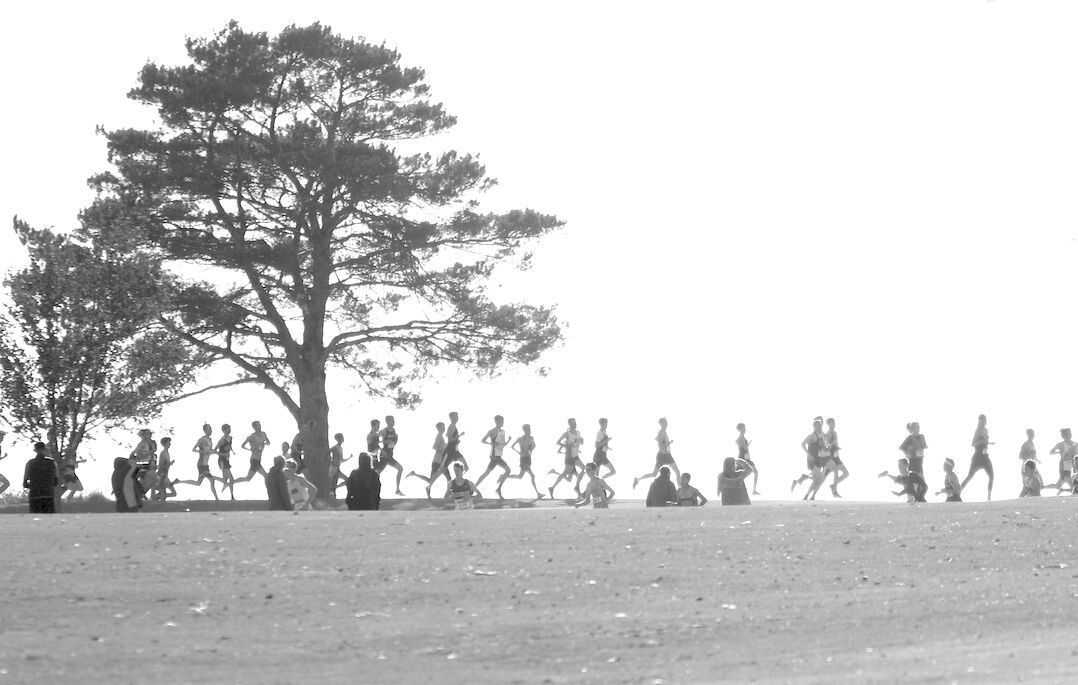 The Pella Dutch boys team huddles before their race.

The Pella Lady Dutch race off the starting line.

Knoxville's Norah Pearson (459) in the pack at the start of the race.

Pella's Jacie Trine (175) and Abigail Cutler (laying down) after finishing their races.

FORT DODGE — Over a 130 boys and girls each were in attendance on a cool, sunny Friday afternoon at Lakeside Golf Course in Fort Dodge for the Class 3A State Cross Country Meet. Among those were several area athletes looking for strong finishes to their 2020 seasons.

Oskaloosa’s Patrick DeRonde was making his second straight appearance at the state meet and he showed that year of experience and improvement on his way to a 37th place finish with a time of 17:13.

The junior was in the running for a medal early on after coming in as the 30th-ranked runner, but the 37th place is a huge improvement off of last year’s performance where he took 96th.

DeRonde will hope to crack into a medalist spot next year as a senior.

"Patrick improved by about 60 spots from last year's state meet,” Oskaloosa head coach Michael Comfort said. “He was up in the top 15 through the first two miles and then worked his hardest to fight through that tough third mile. He gained a lot of experience today that he will take into his senior year next year. I'm proud of how much he has grown this year.”

Also running with DeRonde was the Pella boys team, who came into the race ranked second as a team as the Dutch were seeking a possible third team title since 2009.

The team would come up just short of a trophy (awarded to the top three teams), taking fourth with 157 points while Carlisle took third with 149, Solon second with 135 and Dallas Center-Grimes took the title with 87 points.

Tony Schmitz, who won the state qualifier and finished 18th at Fort Dodge a year ago, led the Dutch by earning himself a medal by taking 14th with a time of 16:45.

Chase Lauman was next for Dutch in 28th at 17:04 with Josiah Wittenberg, who took sixth last year, finishing behind him in 49th at 17:21.

Also running in that boys race was Knoxville’s Seth Walraven, who finished 77th with a time of 17:42.

Prior to the boys race, the girls took to the slopes of Lakeside Golf Course.

The Pella girls came into their race ranked 11th but would turn out an impressive day, taking eighth with a score of 214, just four points behind Harlan for seventh while Ballard took first with 66 points.

Jacie Trine would pace the Lady Dutch with her 38th place finish at 20:21. Abigail Cutler finished shortly behind her in 41st place at 20:23.

The Lady Dutch graduate two seniors but return four freshmen from this squad that will look to make it back to Fort Dodge.

Knoxville’s Norah Pearson made her second straight state appearance this year. The sophomore was fifth a year ago and would finish just outside of medaling with a 17th place finish at 19:49, just five seconds off of a medal at 15th place.

Pella Christian’s Kaden Van Wyngarden would run in the 2A meet on Saturday, taking 88th with a time of 18:45.