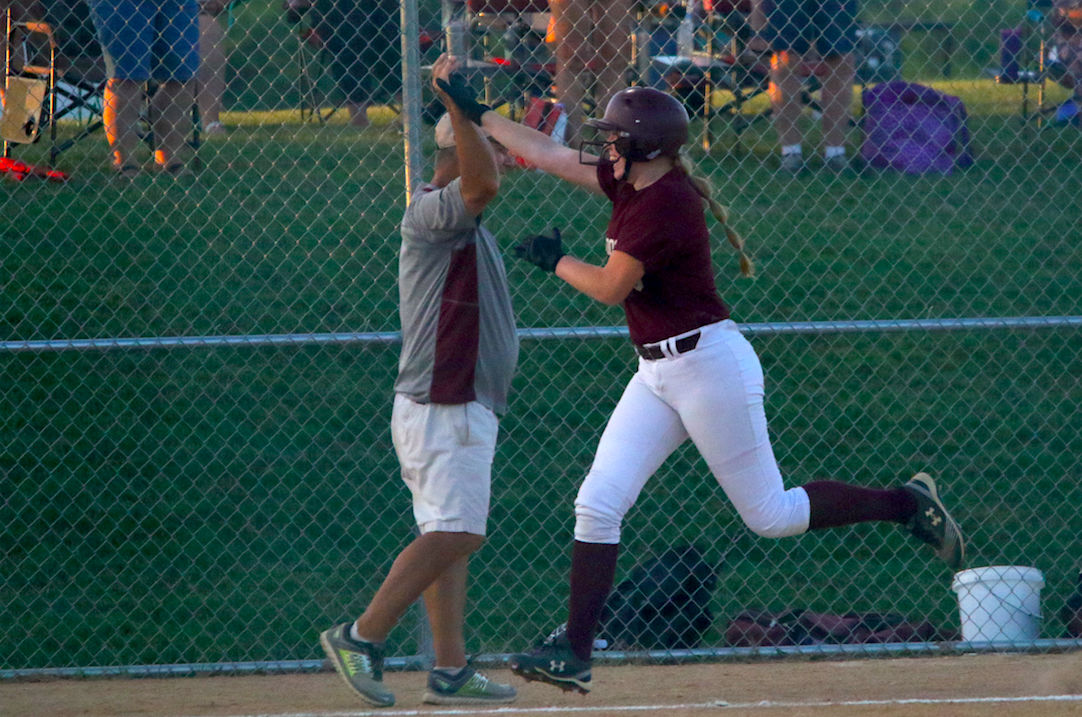 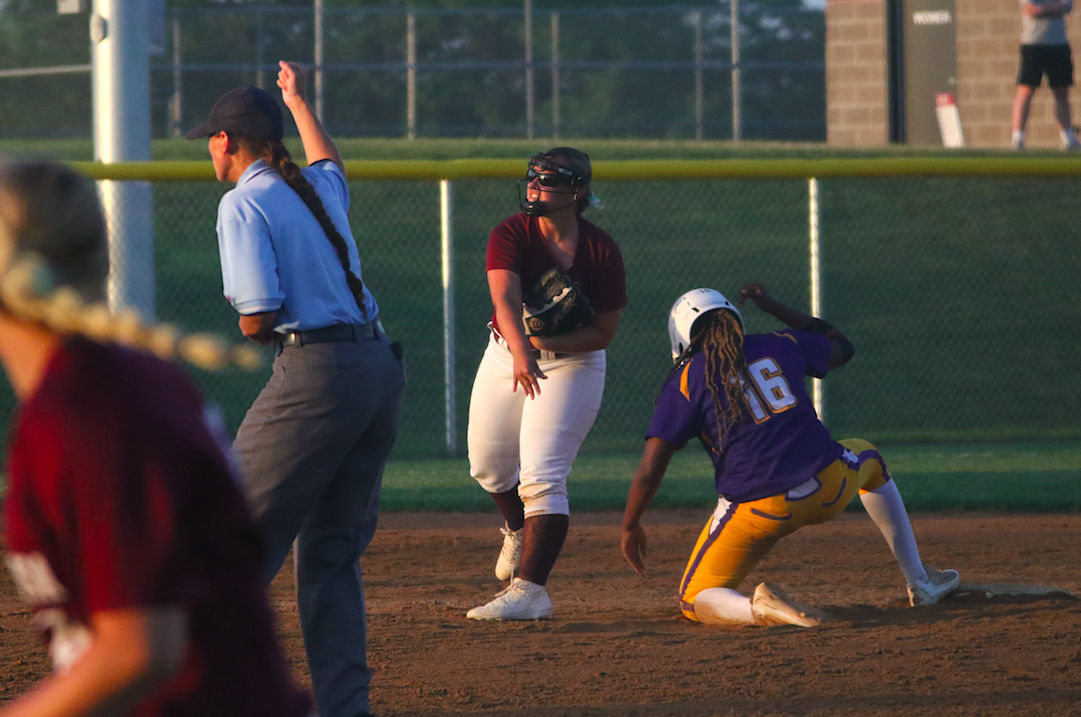 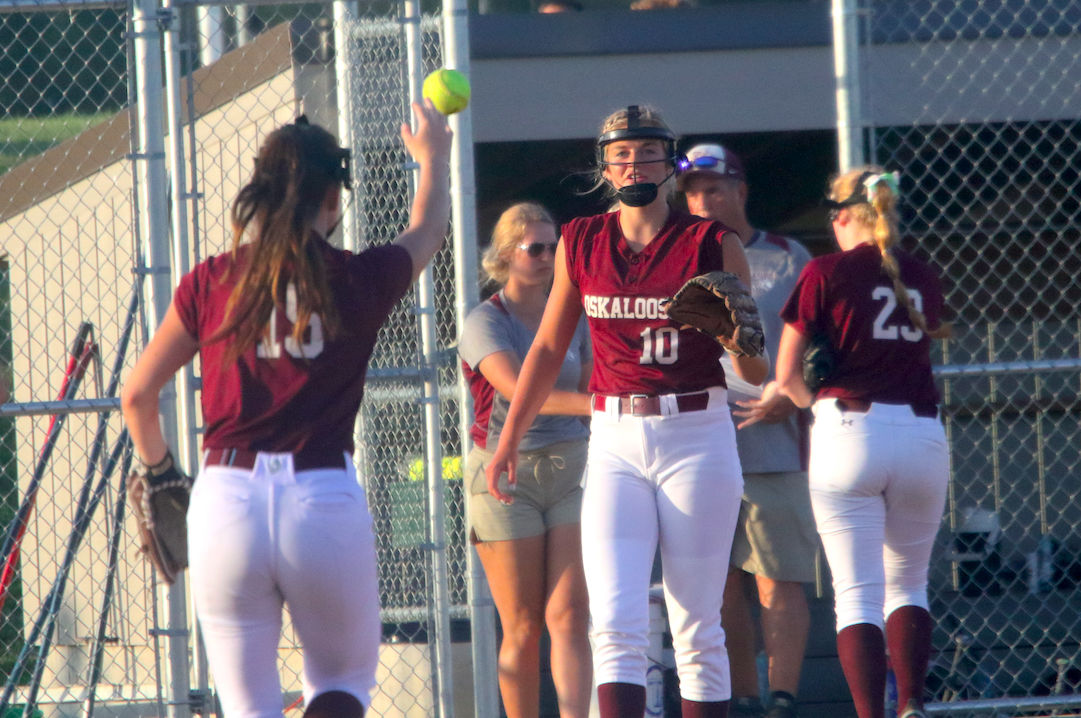 Oskaloosa's Faith DeRonde (10) gets the ball from teammate Taylor Wills (15). 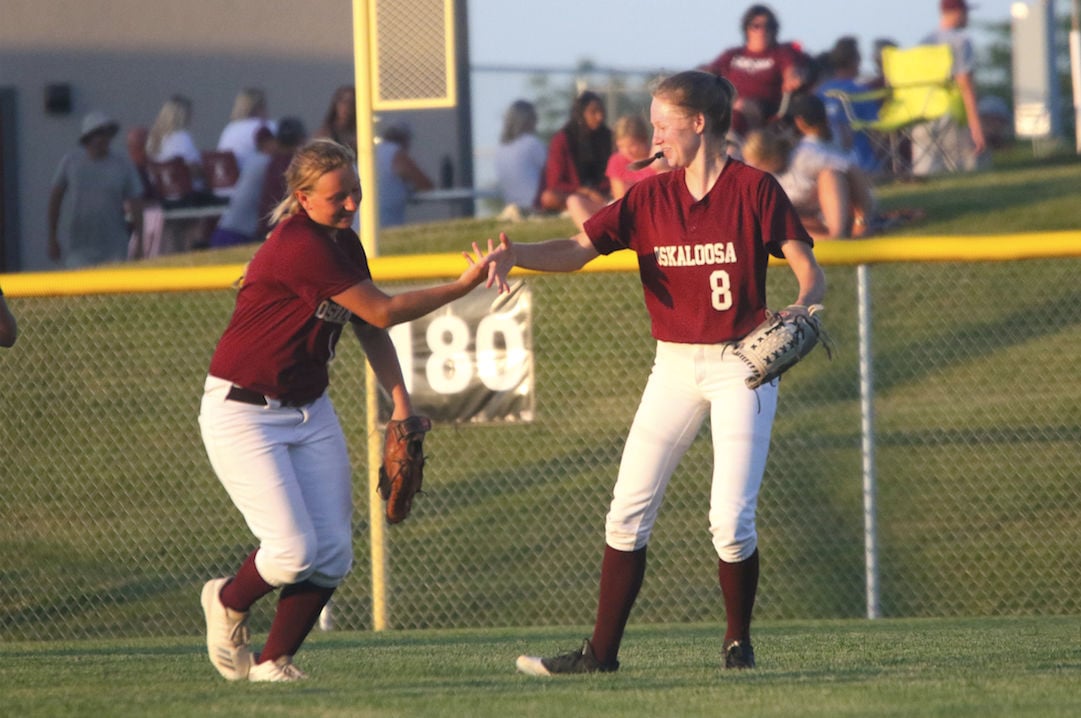 Oskaloosa's Faith DeRonde (10) gets the ball from teammate Taylor Wills (15).

OSKALOOSA — Sometimes one hit can change the course of a game. In a low scoring game it proved to be the difference as No. 8 (4A) Oskaloosa came out on top in a top 10 showdown against No. 7 (5A) Indianola by shutting out their Little Hawkeye Conference foes 2-0.

After recharging their batteries over the weekend, Oskaloosa came out focused and hungry to get this week started with a big win against a very talented Indianola squad.

“It seemed like we were focused right from the get go,” Oskaloosa head coach Jay Harms said. “It was a whole different team that we’ve had through our first 10 games of the season. It’s the kind of ball club I thought we could have this year. Now we’ve seen what we can be, now it’s just a matter of being consistent and staying there.”

This game featured an intriguing duel in the circle as it featured a pair of top pitchers in the conference with Indianola’s Kate Kralik (6-1, 0.88 ERA) and Oskaloosa’s Faith DeRonde (4-0, 0.23 ERA).

Both teams had chances to get on the board early. Indianola stranded runners on second and third to start the game and Oskaloosa would strand a runner on third in the bottom of the first inning.

It was a pitchers and defense kind of game until the bottom of the fourth inning.

Ava Vande Wall would start off the inning by turning on an inside pitch and lacing one off the right field fence for a leadoff double. Maddie Haines would try to move Vande Wall to third with a sacrifice bunt but would pop it up bring Sophia Dykstra to the plate with one out.

Dykstra wasted little time, taking the first pitch from Kralik deep over the left field fence and onto the berm for a two-run home run to give Oskaloosa the lead.

“We battled and got some good swings,” Harms said. “Ava and then Sophia really got into it and had a nice swing and it was sweet to see that go over the fence and give that 2-0 lead because now they have to play catch up.”

From the Oskaloosa pitching and defense would shine. The Indians were doing all the little things like throwing out the lead runner when possible and getting the ball in quick which helped save runs when Indianola was threatening in the fifth and sixth inning.

“How many times tonight did we turn around and throw to second and get the lead runner,” Harms said. “Makenna Schaffner’s throw from right field saves a run because she gets the ball in and we’ve struggled with that at times this year.”

Indianola would bring the tying run to plate with a runner on first and two outs in the seventh but DeRonde would finish off the game with a strikeout to give her another complete game shutout, her fourth in as many starts.

DeRonde would get the shutout after giving up six hits and two walks with five strikeouts. She has only given up one run in 30 2/3 innings, which came in a relief appearance against Norwalk.

“Faith threw well,” Harms said. “She threw well last year against them so that’s why I threw her tonight. I thought last year she battled them really well and I thought she gave us our best chance tonight but we also wanted to rest Hayle a little bit.”

Dykstra finished 2-for-3 with a home run and two RBIs while Meghan Moorman picked up another two hits, also going 2-for-3.

Oskaloosa will look to continue their five-game winning streak as they pass the halfway point in this shortened season.

“We just want to keep building this week and hopefully we’ll keep improving and get to where we want to be in the end because we know that’s coming soon,” Harms said.