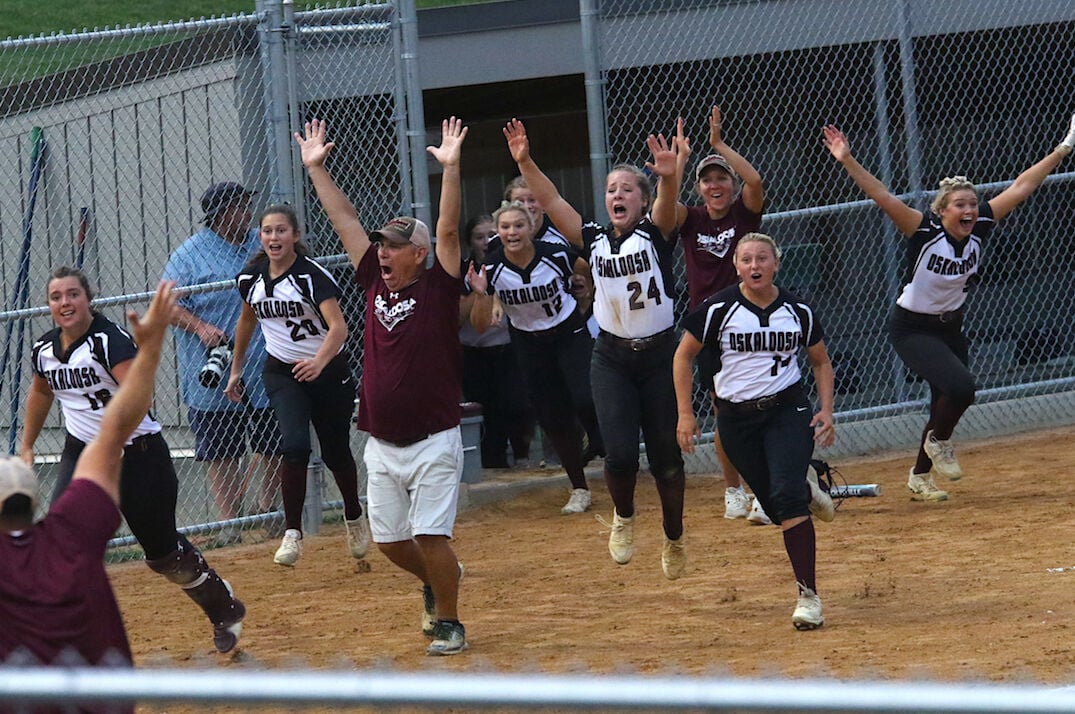 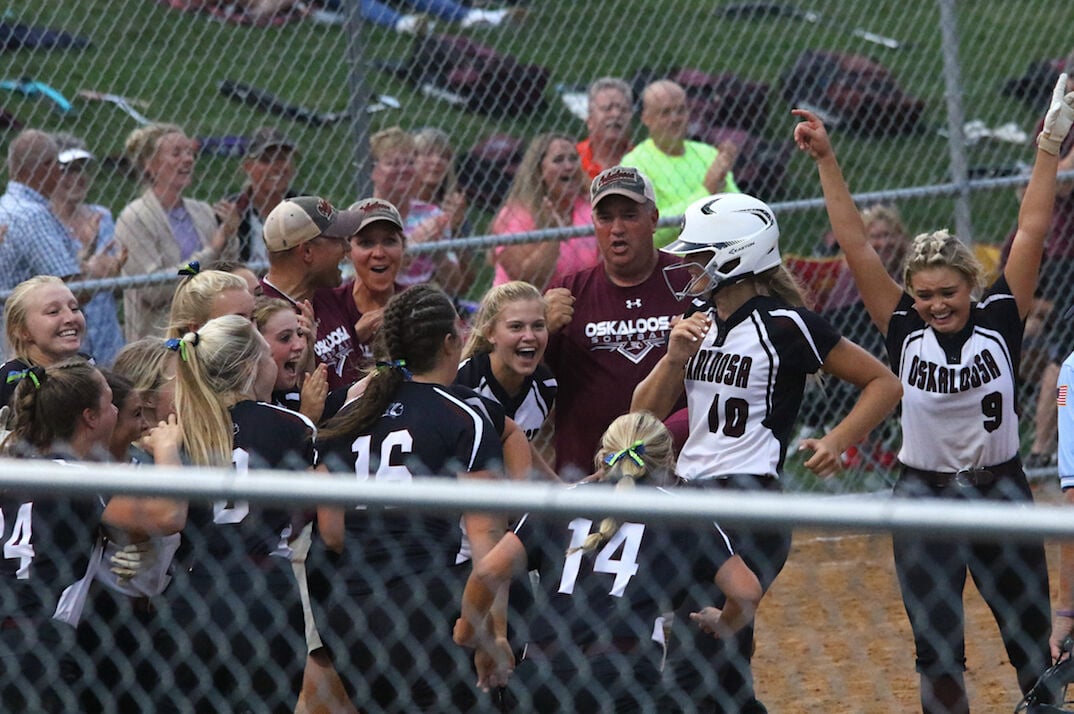 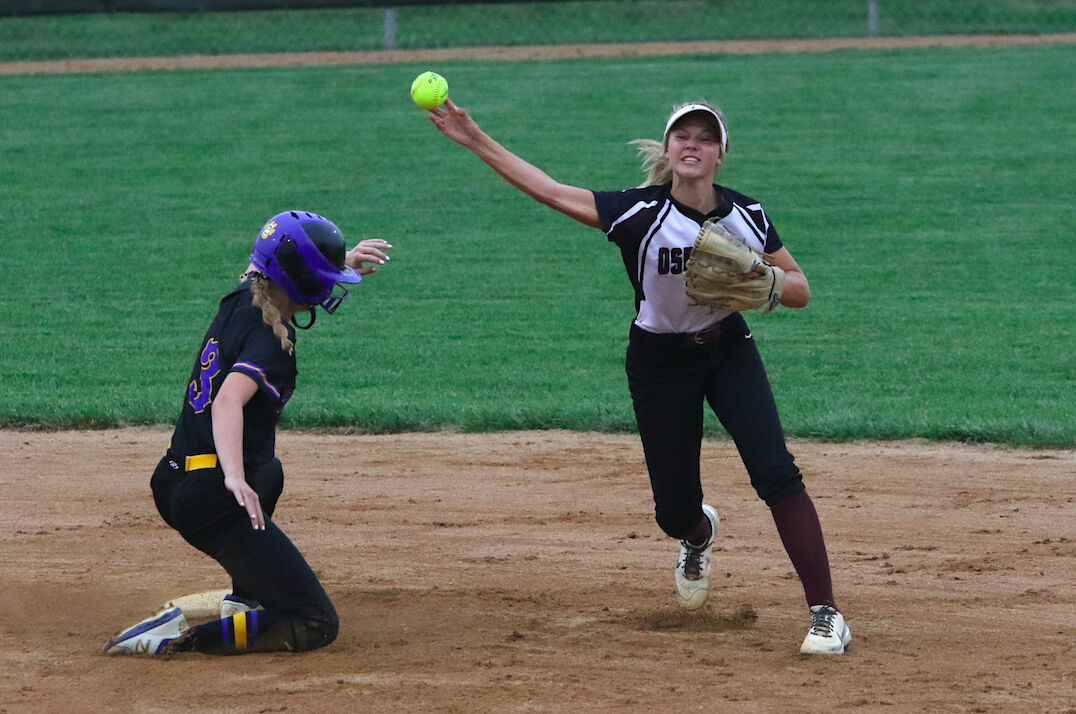 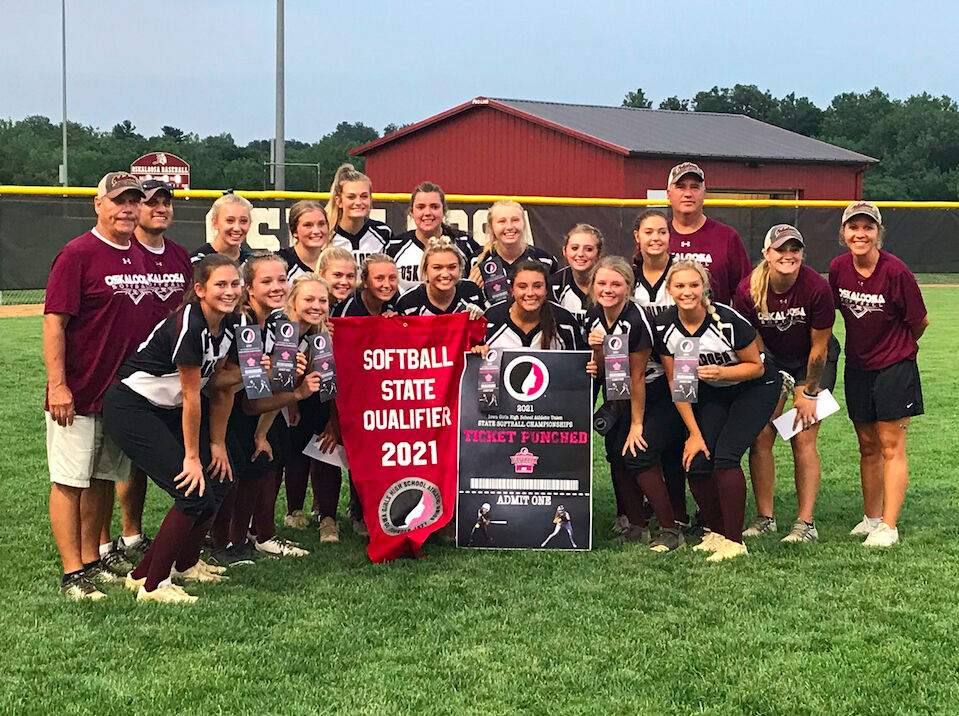 OSKALOOSA — You could not have drawn up a more drama-filled two days of softball for the Oskaloosa Indians. After a tough 10-inning upset win over sixth-ranked Norwalk on Monday, Oskaloosa came back to Jay Harms Field on Tuesday with Faith DeRonde’s walk-off home run in the seventh giving the Indians a 4-3 win over Benton and a spot in next week’s state tournament in Fort Dodge.

“It's honestly so surreal,” DeRonde said. “It hasn't quite kicked in. I think we have some happy tears going on so that's good but I think this is all we needed. I know we had some adversity at the beginning of the season but these are the people we need. We didn’t know where we were going to start then all of a sudden we are on that roller coaster that only goes up and we’re only getting better.”

Jay Harms Field was packed up spectators egger to watch what would be another classic softball showdown. Oskaloosa knew it would be a tough matchup with a strong hitting Benton club that was coming in well rested while the Indians were coming off of an emotional win the night before which DeRonde threw over 150 pitches.

“We knew coming in they're good hitting ball club,” Oskaloosa head coach Jay Harms said. “They're young, but man they swing the bat hard. I thought Faith threw well, she did what she had to do after throwing 150-some pitches last night to come back and gut through seven more for us.”

DeRonde, who ended up pitching all seven innings allowing three runs, one earned, on five hits with four strikeouts, didn’t show any signs of fatigue early as she held the Benton bats scoreless through the first four innings while only allowing two hits thanks to some great defense that included a vintage 4-6-3 double play from Lucy Roach to Presley Blommers to Abby Braundmeier to get the Indians out of a first and second situation with one out in the third.

Meanwhile, Oskaloosa had their bats going early. Maleah Walker would reach on an error in the first inning before eventually coming around to score on a bloop RBI single from Braundmeier to put the Indians in front 1-0.

Osky eventually added to their lead in the fourth inning after Blommers laced a double into right-center to leadoff the inning. Kaylee Johnson would sacrifice her over to third with Roach putting together a great two-strike battle and approach to get the ball in play and score the run from third with a ground out, putting Oskaloosa ahead 2-0.

The game was flipped on it’s head in the fifth inning as Benton got the leadoff runner on with a dropped third strike getting by Olivia Gordon behind the dish. A single and a sacrifice bunt would put runners on second and third with one out. DeRonde would strike out the nine hitter to bring the top of the Bobcat order to the plate. Benton’s Emma Townsley would dribble one on the third base line as both runners would have to stay put, loading the bases. The next batter was Gabby McKee, who lined one out to center field with Walker coming up and firing home but the ball would get by Gordon, allowing the tying and go-ahead runs to score and give Benton a 3-2 lead.

Johnson, a five-year varsity player and one of the leaders of the team, tried the rally the troops as they went to the sixth inning with a one-run deficit.

“Leading up to the game we talked a lot about if we get down, that’s okay because that is the game of softball, it’s going to happen,” Johnson said. “How we respond is what’s most important. When they got up by one, I reminded the girls it’s just one run and it’s late in the game so we either fix our attitudes and get our heads up or we’re going to stay here and take the loss.”

Respond they did as Gordon started the inning by reaching on an error. Lydia Van Veldhuizen came in to courtesy run and would be sacrificed over to second base. A walk to Blommers and a single by Johnson would load up the bases for Roach. Roach would attack early and send a fly ball out to left field, deep enough for Van Veldhuizen to tag from third and head first slide by the catcher for the tying score.

“Obviously it was frustrating but it's the way the game goes,” DeRonde said of going down 3-2. “I think we knew that we weren't going to win with just two runs on the board. I think we were kind of satisfied with that at first. They scored but then we got adrenaline and we got it back.”

Benton would escape the sixth with Aubrey Boender grounding out to short with runners on second and third.

The Bobcats would look to strike back in the seventh as a one-out single put the go-ahead run on base. But just as she did in the field in the third and at the plate in the sixth, Roach came up with another huge play for the Indians as she fielded a grounded, was just able to tag the runner going to second and fire it to first for her second double play of the night, sending the game to the bottom of the seventh with a chance for a winner from Osky.

DeRonde would step up to the plate with one-out and quickly fell behind with two strikes. The junior, who was 0-for-3 going into that at-bat, had thoughts of just battling and trying to find a way on base. But then the mindset switched.

“I shortened up for a second and then I was like you know what, we have nothing to lose at this point,” DeRonde said. “It's last inning and I know what I can do. I just felt like she was going to pipe one and she did and I took advantage of it.”

DeRonde had a pitch in mind and she saw it and ripped it on a line just clearing the left field fence as the crowd and her teammates roared in excitement as with one swing of the bat, Oskaloosa was heading back to state.

“When Faith hit the ball over, I was like you know that’s Faith,” Johnson said. “That’s a Faith type of move right there. I just love that girl so much.”

DeRonde was mobbed by her teammates at home plate as the Indians were given their banner, capping off two comeback wins in consecutive days on their way to a state tournament berth.

“The kids just battled,” Harms said. “We got down 3-2 and it was huge that we got that run in the sixth. We kept talking about needing to get our top of the order back up and get some people on base to give our top of the order a chance. And wow, what a great feeling. I just love this team. Those kids really bonded and really came together as a group.”

Playing on back-to-back days after an emotional win the night before might of been a tough situation for a lot of teams. But when Oskaloosa was enjoying some victory McDonalds after their win over Norwalk, they found out they would have another chance to play at Jay Harms Field and a chance to qualify for state on their home turf.

“I'm glad we actually played back to back rather than having a day off,” Johnson said. “This morning we got up at a good time and had breakfast at Faith’s. We got our mojo going, we came on our scooters and we were ready to play.”

Scooters have been a recent addition to the team this year. A few weeks ago the team was in Norwalk for a doubleheader and they saw the Warrior baseball team riding scooters around to get past construction around the school. The Oskaloosa girls asked if they could borrow the scooters for a ride and when they were denied, they took matters into their own hands.

“After we played Norwalk that night we went and bought scooters,” Johnson said. “We were like heck yeah and we started riding them around town and after games. Actually our state tank tops say ‘Scootin' to State’ so it's been fun.”

The scooters have been personalized as the season has gone on with lights and other accessories being added to give them some more pop. Since those two close losses to Norwalk that night, Oskaloosa has gone 10-2 with the scooters. And you can bet they will find a way to make it to Fort Dodge.

For Oskaloosa, it is their fifth trip to state in school history with four previous all coming in the last eight seasons. For Johnson, it will be her third trip to state as she continues to be glad to delay to finish of her high school career. For a team that entered with a brand new infield and catcher coming into the season, it has really been a case of a team that has grown throughout the year to put themselves in this situation.

“Our infield was all brand new and sure we've all known each other and played together for our whole lives, but putting it all together and jelling together is a whole different story, especially at the varsity level,” Johnson said. “The past five years, I honestly would not have traded it for anything. Making state three out of my five years with one getting canceled, that's pretty dang good.”

Oskaloosa (22-14) enters as the eighth seed of the 3A tournament and are set to take on No. 1 Winterset (34-7) on Tuesday at 1 p.m. at Kruger Seeds Field in Fort Dodge. As an eight seed, the pressure will be off of the girls as they will have a chance to just enjoy the experience and see if they can add another upset or two on the way.