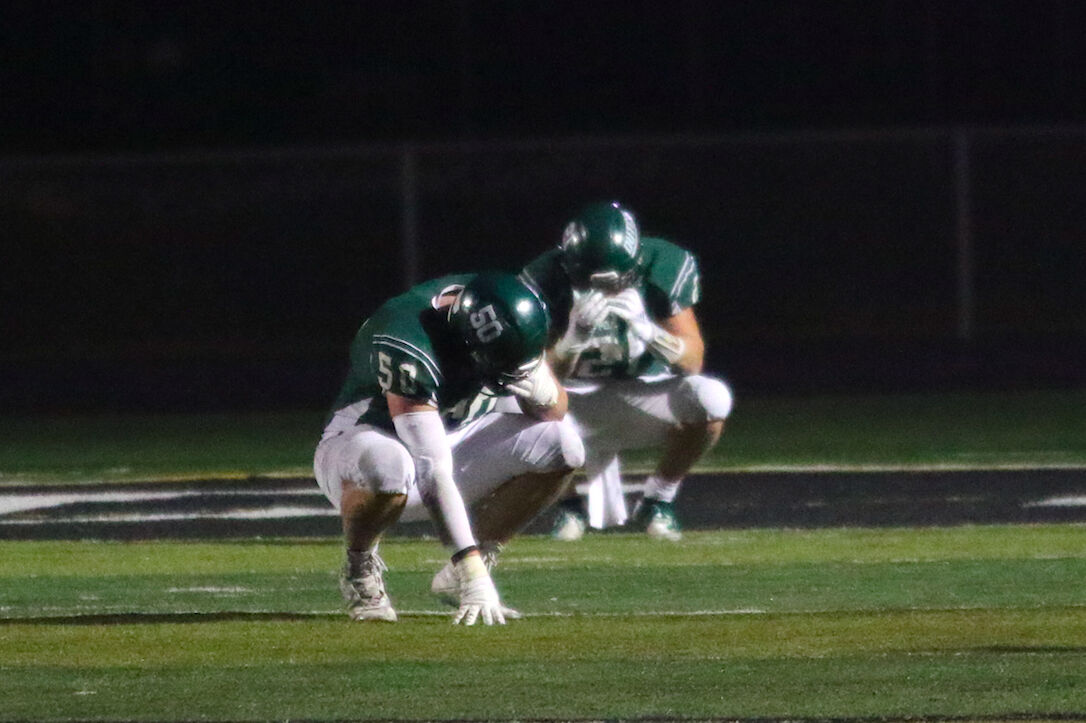 Pella's Kody Huisman (50) and Josh Warner (20) get emotional as the Dutch's season came to an end with their 6-0 loss to Grinnell. 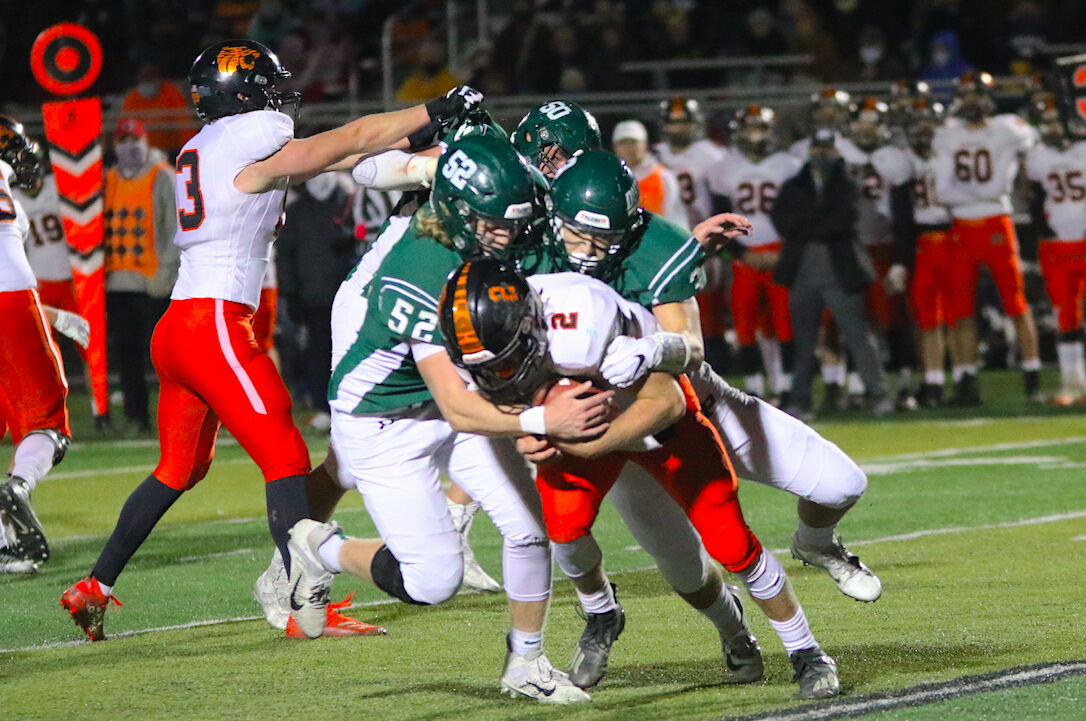 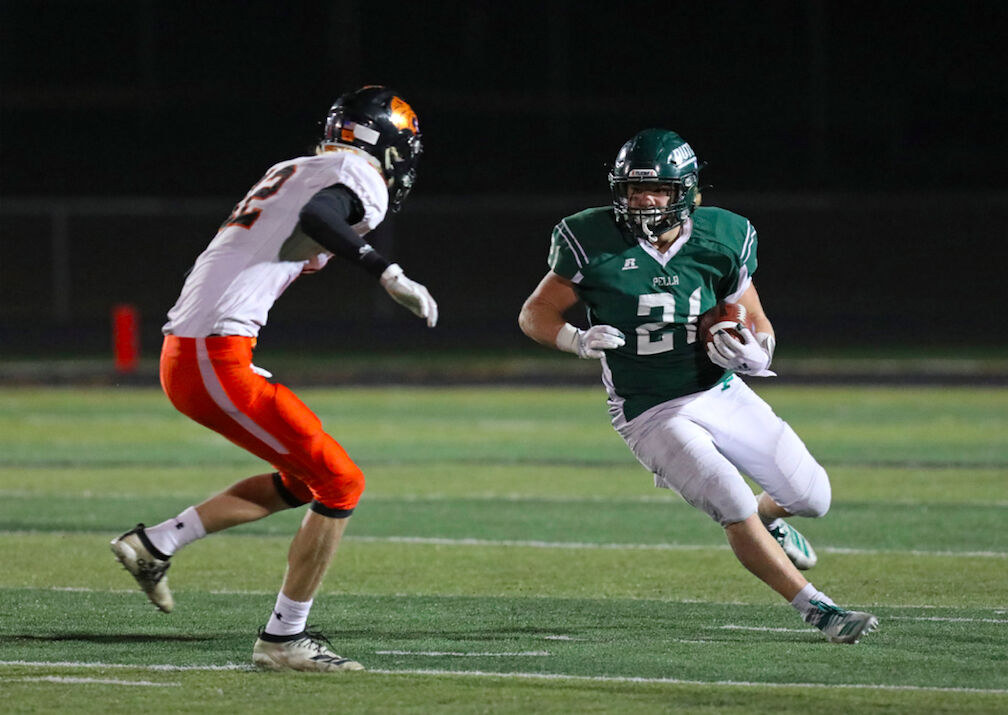 Pella's Grant Nelson (21) looks to elude a defender after making a catch. 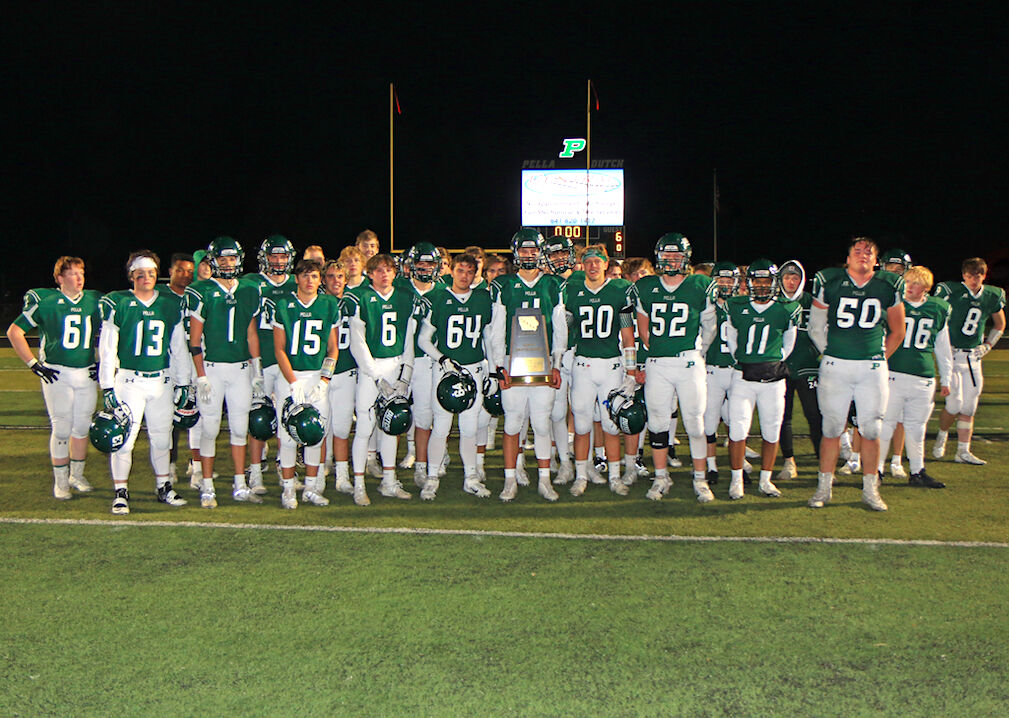 The Pella Dutch with their playoff trophy.

Pella's Kody Huisman (50) and Josh Warner (20) get emotional as the Dutch's season came to an end with their 6-0 loss to Grinnell.

Pella's Grant Nelson (21) looks to elude a defender after making a catch.

The Pella Dutch with their playoff trophy.

PELLA — Mistakes are magnified in the postseason. That was certainly the case in Friday night’s third round playoff matchup between Pella and Grinnell. Five costly turnovers hurt the Dutch in a big way as they were held off the scoreboard in a heartbreaking 6-0 loss to the Tigers.

With a full moon and a cold October night just before Halloween, the Dutch were tricked instead of treated.

Neither offense had things going until Pella was driving down the field late in the first quarter. The Dutch were poised to strike first and it appeared they would do so as Kody Huisman took the fullback dive and looked like he might have crossed the goal line but the ball was ruled to be out and Grinnell jumped on it on the one yard line.

That would be Pella’s best scoring chance of the night as the turnover bug bit the Dutch hard.

A fumbled handoff and an interception, both in plus territory, would hand the ball back over to Grinnell and halt any momentum for Pella in the second quarter.

“It’s disappointing, we had an opportunity to get some points early,” Pella head coach Jay McKinstrey said. “We thought we were in the end zone down there and it sure looked like we were. You think you’re up 7-0 and you’re gonna get momentum and then we had a couple of other turnovers in good field position. Grinnell’s got a good football team and it’s a playoff game, you’ve got to take care of the football and take advantage of the opportunities when you get them.”

Grinnell would capitalize on the third Dutch turnover with Tiger quarterback Cole McGriff hitting his big 6-foot-8 wide receiver Owen Coffman on a 13-yard slant for what would be the game’s only touchdown. An unsuccessful extra point made it 6-0 as that score would hold going into halftime.

The Pella offense crossed midfield twice in the third quarter but would stall for punts both times.

A fourth Pella turnover gave Grinnell the ball on the Dutch’s 26 yard line early in the fourth but the Pella defense, as it did all night, came up with another huge play to force a fumble and get the ball back with the game still up for grabs with 7:50 left.

The Pella defense did their best to keep their offense in this game, holding the high scoring and top rushing team to just the lone touchdown. Wyatt Hunter, who has over 2,000 rushing yards this season, had 133 yards on 30 carries for the Tigers but was held out of the end zone for the first time this season.

“Our defense played awesome,” McKinstrey said. “That’s why we needed to get those points early because we have to create momentum for our defense. You can’t keep playing 0-0 or behind 6-0, it gets tiring. We were getting tired but they kept fighting and fighting.”

But a quick three and out from Pella gave the ball back to Grinnell as the Tigers looked to eat up the clock.

Pella got the ball back with 3:48 to go but would find themselves with a critical fourth and four with 3:05 left on their 41 yard line.

Ryan Mace would drop back and try to squeeze one over the middle but instead it was picked off for his third interception of the night and Pella’s fifth turnover.

It was a tough final game for the senior Mace, who completed five of his 18 passes for 59 yards with those three interceptions.

That would be curtains as Grinnell ran out the rest of the clock to secure the win and advance to the state quarterfinals while ending Pella’s season in tough fashion.

For the Dutch, it was their first time being shutout since last year’s 24-0 state quarterfinal loss to Solon.

It was a somber mood on the field after the game as many Pella seniors were in shock and spent some extra time on the field the share hugs and some tears with teammates and coaches.

Pella finishes the season with a 6-3 record and will graduate a talented senior class of 23 boys.

“I thought we had a great group of young men as far as people and football players and I hate to see it end like that because I think we had a really good team,” McKinstrey said. “We got beat up here at the end of the year and didn’t have all of our bullets in our gun. It’s tough but it was good to see them fight all the way to the end and have opportunities to get this game, we just fell a little short.”