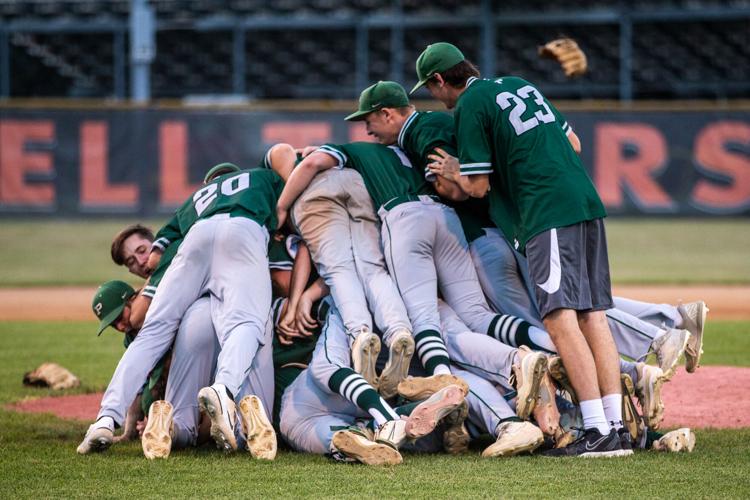 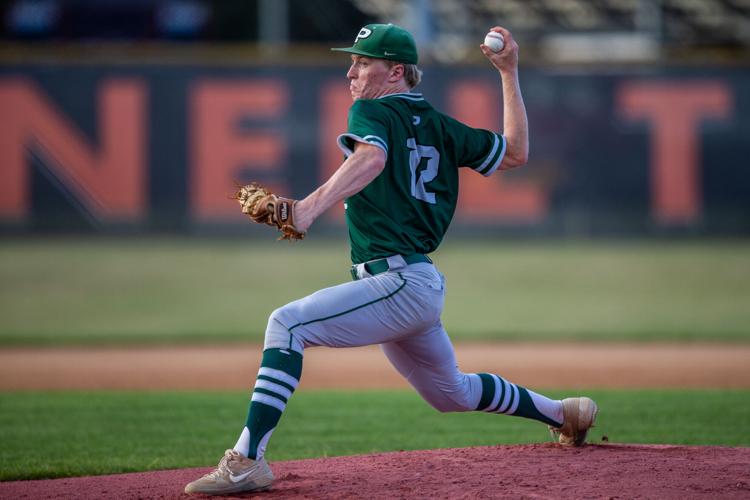 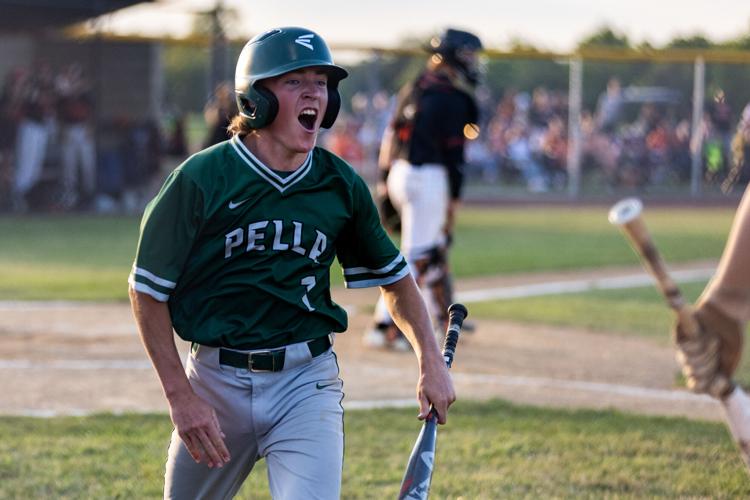 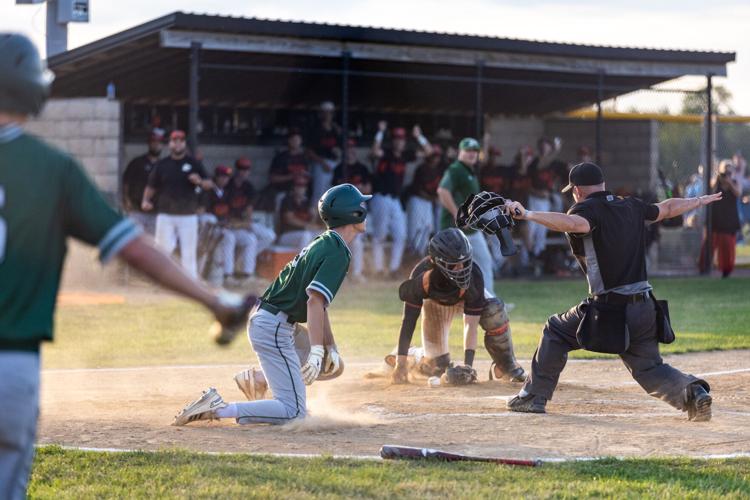 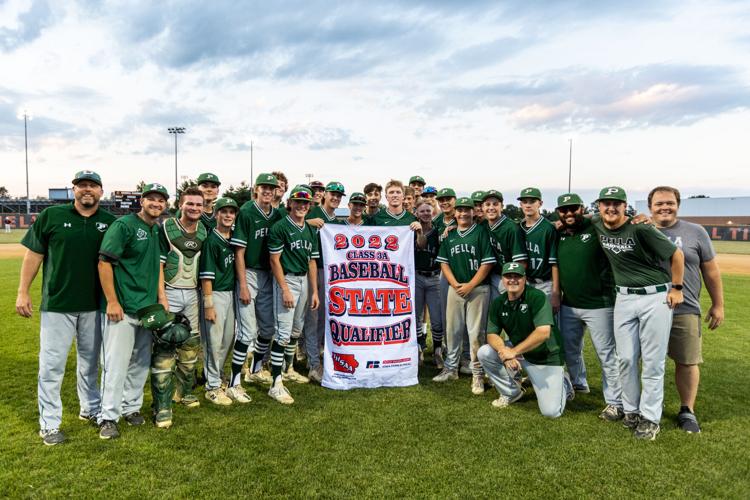 GRINNELL — The Dutch are dancing their way to state again. For the first time since 2016, Pella’s boys of the summer have punched their ticket to state after an impressive 2-0 upset win over No. 3 Grinnell in Wednesday’s substate final showdown.

“Our guys just took advantage of every little bit that they could and we put together just enough offense,” Pella head coach Jesse Jablonski said. “Jason Knox was absolutely incredible on the mound tonight and we played flawless defense behind him.”

Pella and Grinnell were meeting for the fourth time this year with the Tigers winning the previous three meetings all by three runs or less. The Dutch were going to need to do on the road against a team that only had four losses entering the night.

With both teams sending out their elite aces of their pitching staffs, the game was figuring to be a low-scoring affair and it proved to be just that.

Pella sent out Jason Knox (9-3, 2.01 ERA) while Grinnell had Brady Steward (9-2, 1.41 ERA) on the mound. Both guys were lights out in the early going as Knox didn’t allow more than one baserunner in any inning and was able to tally seven strikeouts in the first four innings. Meanwhile Steward retired 11 of the first 12 batters he faced.

The action started to pick up in the fourth with the Dutch looking to rally with two outs. Keegan Hansen got it started with a two-out single followed by a double by Caleb Stewart and a walk by Cole Hillman to load the bases. Steward would escape the threat with a big strikeout of Tate Weesner to keep it locked at 0-0.

After another 1-2-3 inning from Knox, Pella quickly got the boom sticks going again. Jack Howard would reach base with a one-out single before some opportunistic base-running would get him to third base while Isaiah Kettler drew a walk to put runners on first and third with one out and Quinn Rhamy stepping up to the plate.

Rhamy proved to be the perfect guy for the situation as the team’s best bunter with a team-high 10 sacrifices on the year. With Grinnell making a mound visit, Pella had a meeting of the minds at third to coax up the play with Rhamy executing it to perfection as he got the squeeze down with the pitcher charging but not in time before Howard crossed the plate making the only play to first with the Dutch gaining a 1-0 lead.

“It was the right guy at the right place at the right time in that moment,” Jablonski said. “When they came out to do the mound visit we got together and we talked about it and said we're going to do it on the second pitch. And sure enough, second pitch comes along and it all played out just the way we talked about. But I also have to give credit to Jack Howard. He put together about a nine or 10 pitch at-bat to get that started. He fouled off a lot of good pitches, got himself on base and that really was the catalyst to that whole entire sequence.”

Pella wouldn’t stop there as Knox would help his own cause in the next at-bat by lacing a single to left with Kettler racing around third to just beat the tag at home and make it 2-0 in favor of the Dutch.

Grinnell was going to need a quick answer as they were running out of outs but a pair of base-running blunders would cost them. In the fifth inning, it was an inning-ending doubling on a line out to Stewart at first base, who would quickly firing back to second to catch the Tiger runner too far off the bag to get back. Then again in the sixth inning, Grinnell drew a lead-off walk but would get doubled up on a routine fly out to Leyton Bethards in right, who would fire a strong throw back to first to get the runner before he could get back.

Knox would march back to the rubber for the seventh to close things out. He would get a pair of fly outs before striking out the final out of the night to start the Dutch dog pile as Pella would clinch a state tourney berth.

“We felt really good about how we've been playing and we've played three close games against Grinnell and we knew what we had to do to beat them,” Knox said. “We had to play pretty much flawless baseball and we were able to do all the little things and I just couldn't be more proud of all the guys.”

Grinnell has always been a thorn in the side of Knox. Over the past three years, Knox was 0-3 in three starts against the Tigers allowing a total of 13 runs over those games. Wednesday night he would change his fortune in his final battle against Grinnell.

“This has been a team that's plagued me for years,” Knox said of Grinnell. “I really made sure in the bullpen before the game that I was fine tuning and making sure every pitch was sharp. I knew if I had my game, and I knew that I could do what I did tonight, I could shut this thing down. It wasn't easy, but it was all about execution and I felt like I did a good job of that today.”

Knox finished the night with a complete game shutout needing only 85 pitches along the way while surrendering just three hits and one walk with nine strikeouts. He picked up his ninth win of the season and his nine strikeouts brought his season total to an even 100.

“It’s his third year he's been our number one so you can kind of say he's been preparing for this moment for three years and it's just great to see a great young man like that have success,” Jablonski said of Knox. “He's put in so much work and he’s been such a leader for our pitching staff for the last few years. We knew he was capable of this. Grinnell is a very good team so he had to execute pitches and he did that all night. I couldn't be more proud of him individually.”

The Pella offense has been hot over the last several weeks but they only needed five hits to get the job done on Wednesday. Knox, Hansen, Stewart, Hillman and Howard all had one hit while Rhamy and Knox both had an RBI.

The Dutch now head to state winners seven of their last eight games as they feel like things are coming together at the perfect time for them.

“I think we've been playing the best baseball we have all year since the start of the playoffs,” Jablonski said. “We've put together three complete games of pitching, defense and offense. We've put it all together and I think we're a hot team right now so we're going to look to carry that momentum into next week. We're going to enjoy the next day here while we celebrate this and then we're going to get ready for whoever we see in Iowa City.”

“We're going to look to keep playing our ball,” Knox said. “Nobody's saying that this is our last game. We're looking to just keep doing what we do and hopefully keep winning games. We're not ready to be done yet.”