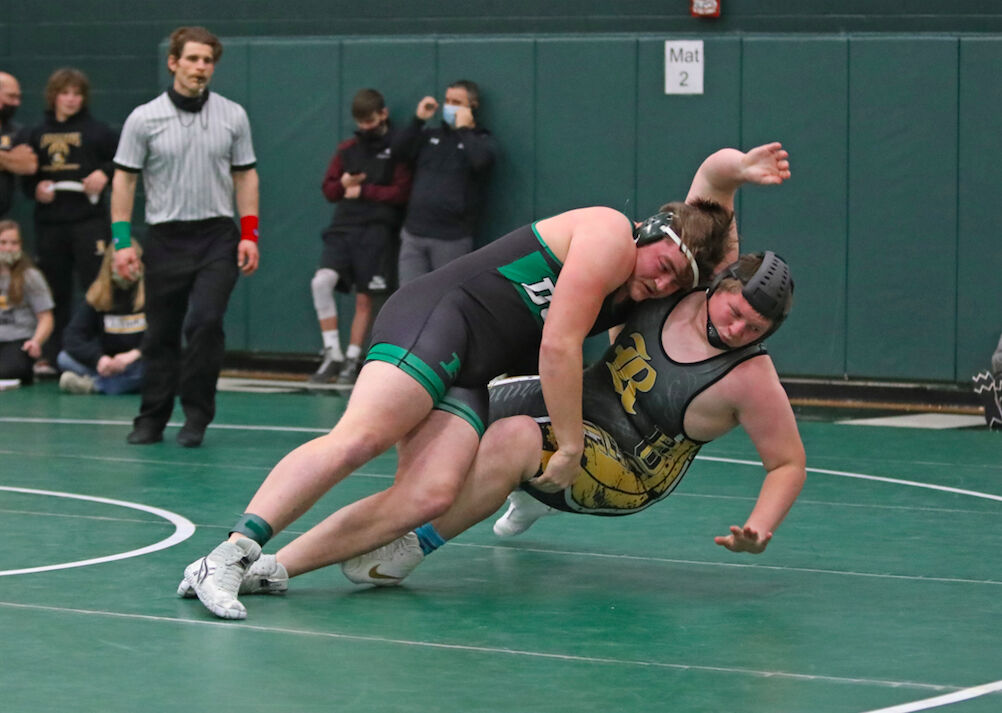 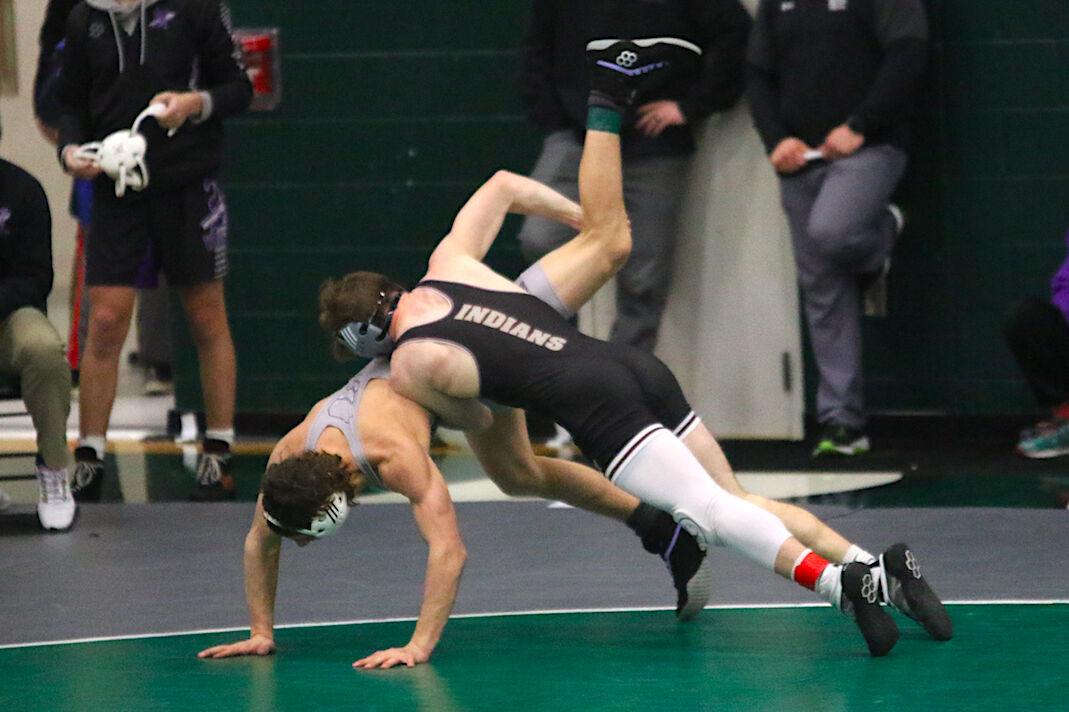 Oskaloosa's Leland Evans scores a takedown during his title match.

Oskaloosa's Leland Evans scores a takedown during his title match.

PELLA — A lot of talented wrestlers were in the building for Pella’s annual Bill Van Horn Invitational. The Dutch would come away with third place with two champions while Oskaloosa finished sixth with a runner-up. Norwalk would take the team title with seven individual champs.

Pella had a great opening round with 10 of their wrestlers advancing to the semifinals. There they would run into some tough competition as only four made it to the finals.

Damion Clark claimed Pella’s first title at 113 pounds. He picked up a 16-2 major decision in the quarterfinals before getting a second period fall over No. 6 (1A) Connor Golston of Moravia in the semifinals.

Clark would meet Norwalk’s Jake McKenzie in the finals where he would roll him up for the second period pin for the title.

Peyton Ritzert took the title at 138 pounds for Pella. He had a first period pin in the quarterfinals before winning a hard-fought 7-5 decision over Oskaloosa’s Zack Beebe in the semifinals.

Ritzert matched up with Michael DeJong of North Mahaska in the finals. He would take care of business with a 10-1 major decision for the Dutch.

Pella then had a pair of second place finishers with Ryan Van Donselaar losing a 9-0 major decision to No. 5 (3A) Cade Schmidt of Norwalk in the finals. No. 10 (3A) Kody Huisman had a productive day, defeating No. 10 (1A) Trace Goemaat of North Mahaska by pin in the semifinals before ultimately being pinned by No. 3 (3A) Maddux Borcherding-Johnson of Norwalk in the finals.

The Dutch had a trio of wrestlers winning in the consolation rounds with Ryan Hancock (126), Nathan Born (152) and Christian Lubben (195) battling back to take third at their respective weights.

For Oskaloosa, the results might not have been what they wanted but they wrestled hard against good competition and came away with a pair of top three finishes.

No. 7 (3A) Leland Evans led the Indians on the day. He picked up a first period fall in the quarterfinals before grinding out a 9-4 decision in the semifinals to advance to the finals.

There he would meet Norwalk’s Austin Brenizer. Evans led 2-0 after the first period thanks to a takedown. He would start the second period on the bottom and earn an escape to go up 3-0 but Brenizer would get a big sequence with a takedown and three-point near fall to take a 5-3 lead. Brenizer held off Evans for the 6-4 decision as the Oskaloosa 145-pounder would have to settle for second place.

Zack Beebe had a solid day in his first action of the season. He would go 3-1 in the tournament, picking up a second period fall in the quarterfinals before losing a 7-5 decision in the semifinals. He would bounce back with a first period fall in the consolation semifinals before getting a 5-0 shutout decision against Benton’s Mason Dellamuth to take third place at 138 pounds.

“Some of our kids might not have finished where they wanted, but they battled their hearts out. Having last week off because of COVID definitely showed but their effort today was phenomenal. Lots of tough matches and even tougher competition. Gives us that week back and add some of the starters that were not here today and we definitely could move up in that team race, as well as individuals moving up on those medal stands.”