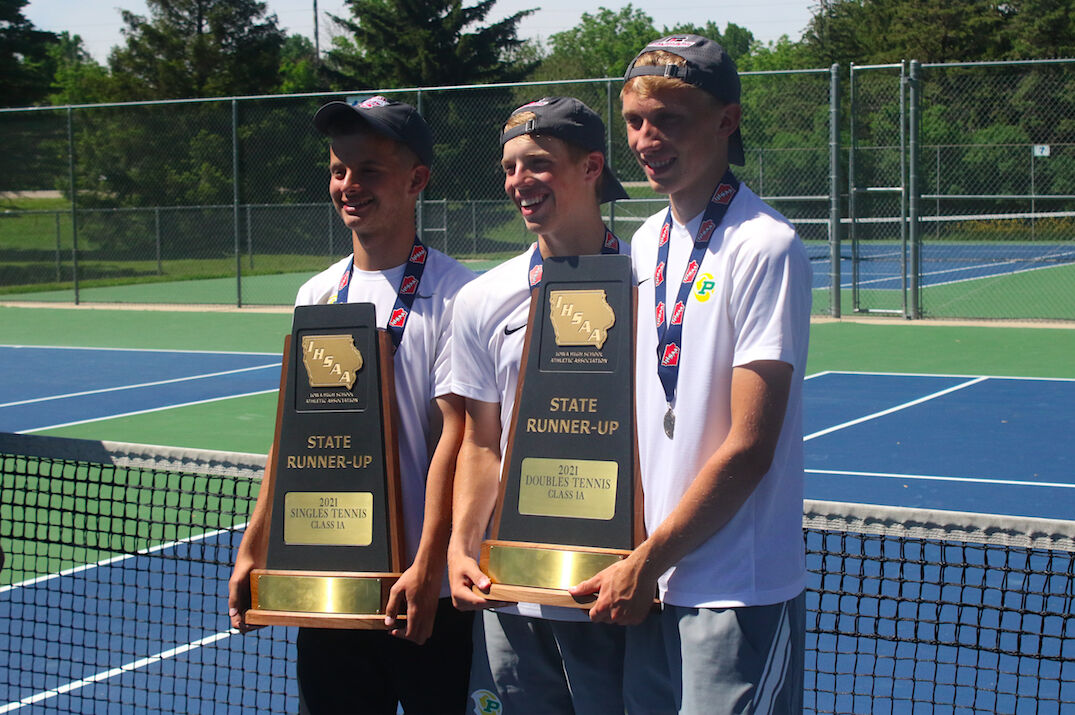 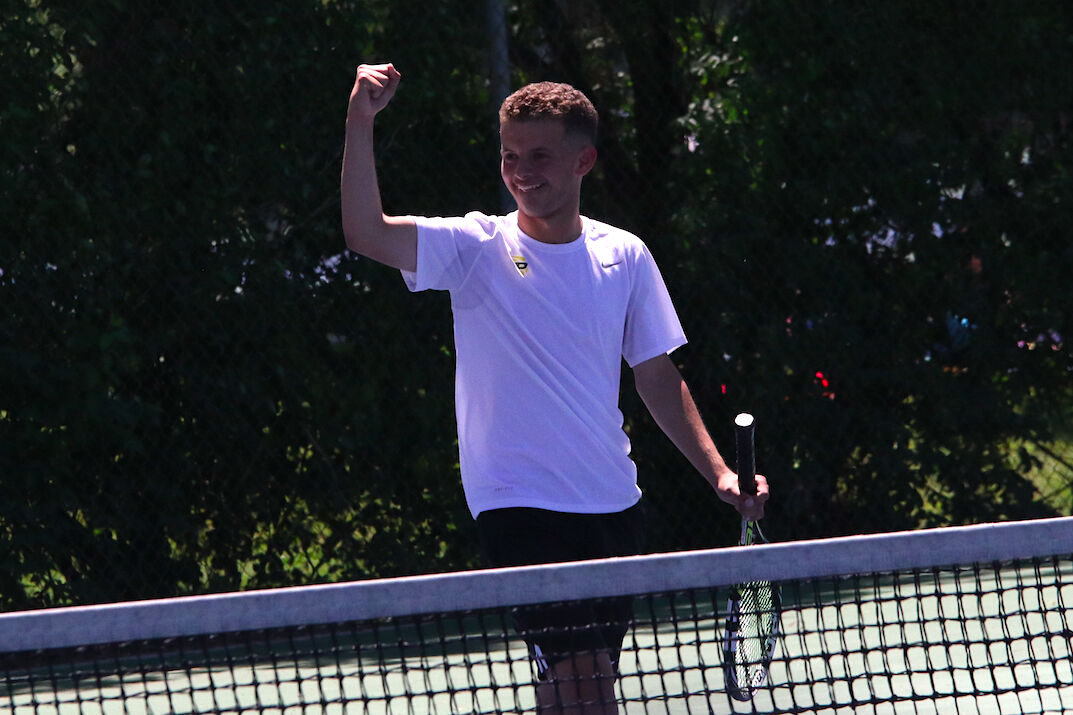 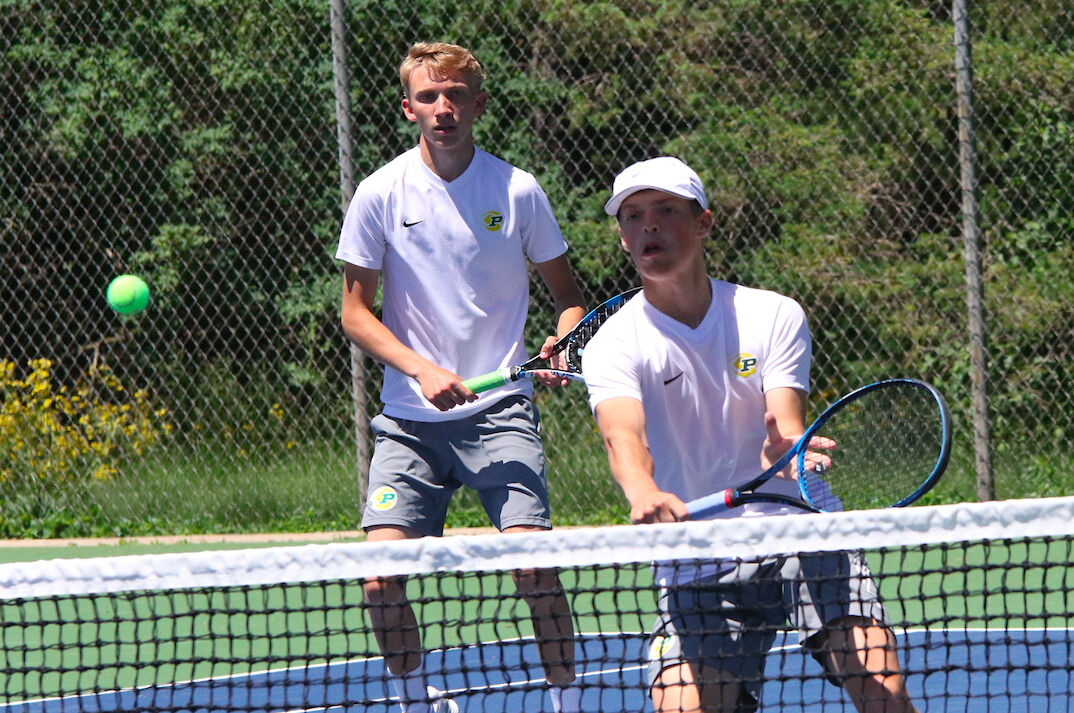 WATERLOO — The Dutch are bringing some more hardware back to Pella. A pair of runner-up finishes by Lucas Heap in singles and Jack Edwards and Vaughn Thompson in doubles highlight a two-day run for Pella at the 1A Individual State Tournament in Waterloo on Friday and Saturday.

After having to move play indoors on Friday due to poor weather, the action was back out on the courts on a beautiful championship Saturday. Although there may be a brief sting of a pair of runner-up finishes, being able to play at state and bring home some trophies is a moment to remember for the Dutch.

“It feels really good,” Pella head coach Josiah Brandt said of their result. “The sun is shining and I'm with a group of guys who I love. It's a great weekend and there's lots to be thankful for with playing and just being able to be with the guys again this season.”

Heap enters as the No. 2 seed in singles and made quick work of his two opponents on Friday, winning 6-2, 6-3 against Aplington-Parkersburg’s Owen Thomas and 6-1, 6-0 against Keokuk’s Abbot Haner to punch his ticket to Saturday’s semifinals.

Heap started day two in the semifinals against Boone’s Ben Craven. Heap started out by dropping the first game but would bounce back to win six of the next seven to win the set 6-2.

Heap started out the second set behind 2-1 but just like the first, Heap would control the middle of the court against Craven and take the next five games to win the match 6-2, 6-2.

“Semifinals was definitely a great result for Lucas,” Brandt said. “He came in, took care of business and look really good against Ben Cravens, a tough player that got third. It was a good win and I think Lucas really set himself apart as the second best player. But we're so happy and proud of Lucas and we've loved having him this year.”

That would set up a championship showdown against former champion Cameron Luhring of Aplington-Parkersburg.

Luhring would showcase why he is the best in the state with a fascinating combination of power and finesse. Heap would battle but Luhring would complete his nearly perfect season with a 6-0, 6-0 win. Luhring finished off his second state title while only dropping one game all season, which came just a week before in the team state quarterfinals.

“I feel like I didn't play my best tennis against him but it's probably because it was him,” Heap laughed. “There's nothing you can do, he forces you to not play as well as you could. I feel like when we were groundstroke against groundstroke I could keep going with him but he's very aggressive and comes to the net every time and then it's just game over for me.”

Heap knew it was going to be a tough test but he was able to enjoy the moment and couldn’t help but crack a few smiles during the match and have a little fun as it was a weekend to remember for him.

“I had some good competition in the early matches and I was able to win fairly easily. I just finished the weekend happy. I'm happy with what I accomplished, I'm happy of the moment we're living. Just coming here with the team and spending a weekend in a hotel and just the whole atmosphere is the best part of the weekend for me.”

Fellow teammate Caleb Briggs opened his singles tournament against the No. 4 seed of Jeff Miller of St. Albert. Briggs would fall 6-2, 6-2 and would be sent to the consolation bracket.

Briggs would bounce back nicely with a 6-4, 6-2 win against Clarinda’s Nathan Brown but would need one more win to get to Saturday’s semifinals. Unfortunately, Briggs would come up one win short with his 6-1, 6-3 loss to Haner of Keokuk ending his tournament run.

The pair had quite the start to their Saturday as they faced Wahlert’s Fair and Feirburger in the semifinals.

The Pella duo had a tough time getting momentum going early as they fell behind 3-0 in the first set. They were able to bounce back and win the next two games but couldn’t ride the momentum as Wahlert answered back and grabbed a 5-2 advantage.

With their backs against the wall, Edwards and Thompson would pump up the energy and dominate the net with Thompson’s backhand overhead shot capping off five straight game wins for the Dutch as they came back to win the first set 7-5.

“Their match against Wahlert might be the best things I've ever seen them play,” Brandt said. “That was awesome to see they really poured it on in the second set.”

That energy rode them the rest of the way as Edwards came through with some big serves and tough points with Pella rolling in the second set to win the match 7-5, 6-1 on their way to the finals.

“Once we gained that momentum when we’re down 2-5, it really kept snowballing and we were able to push through because we really wanted to be in the final,” Edwards said. “That was our goal from day one and we finally got that chance.”

Greeting Edwards and Thompson in the finals was Xavier’s Horstmann and Schmit.

It was the battle of the top two seeds in the tournament as the Xavier pair would jump ahead 2-1 early. But just like against Wahlert, Edwards and Thompson started getting that momentum and got big serves from Edwards on their way to a big 6-3 win of the first set.

Those big deuce points that Pella earned early started to shift in favor of Xavier in the second set as the Dutch missed out on some opportunities and fell 6-1 to force a championship-deciding third set.

Xavier would continue to come up with big shot after big shot and Pella just couldn’t regain their footing as they would end up falling 3-6, 6-1, 6-0 to take second.

“They had a lot of confidence going into Xavier and that showed in the first set. But they're a great team and they beat us the last two sets. Once again, props to them, but I hope they lit up a fire under a guys for Tuesday. We're excited that we get another chance to play them for sure.”

For Thompson, it was his first state of state tournament tennis and although they didn’t ultimately reach their goal of being doubles champion, he was able to reflect positively on the moment.

“Two years ago I was here watching Jack play,” Thompson said. “Just seeing the atmosphere, I wanted to be here. Like Jack said, we were wanting to be here since day one, this was our goal. It just motivates you to have something to work for and to work towards the whole time. We put in the work the whole time, we made it here and we made it to that final match that we wanted.”

But that doesn’t mean it’s the end of the season for Pella, they will have a chance to bring home another trophy on Tuesday as they are one of the final four teams in the state team tournament race. It’s a trophy that has had a bigger priority than any other this season.

“Obviously the individual championship was a goal of ours but we always talked about June 1 and winning as a team together,” Edwards said. “I think it’s an important aspect for us winning as a team and just being able to put together wins and help each other out.”