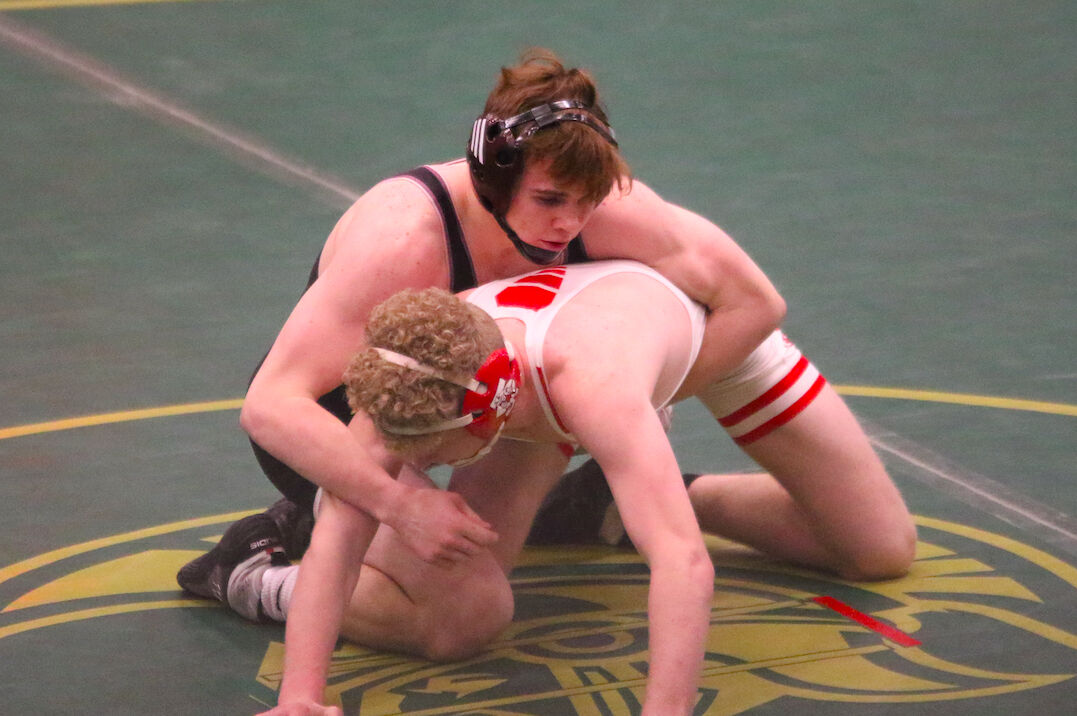 Oskaloosa's Leland Evans (top) gets control during the title match. 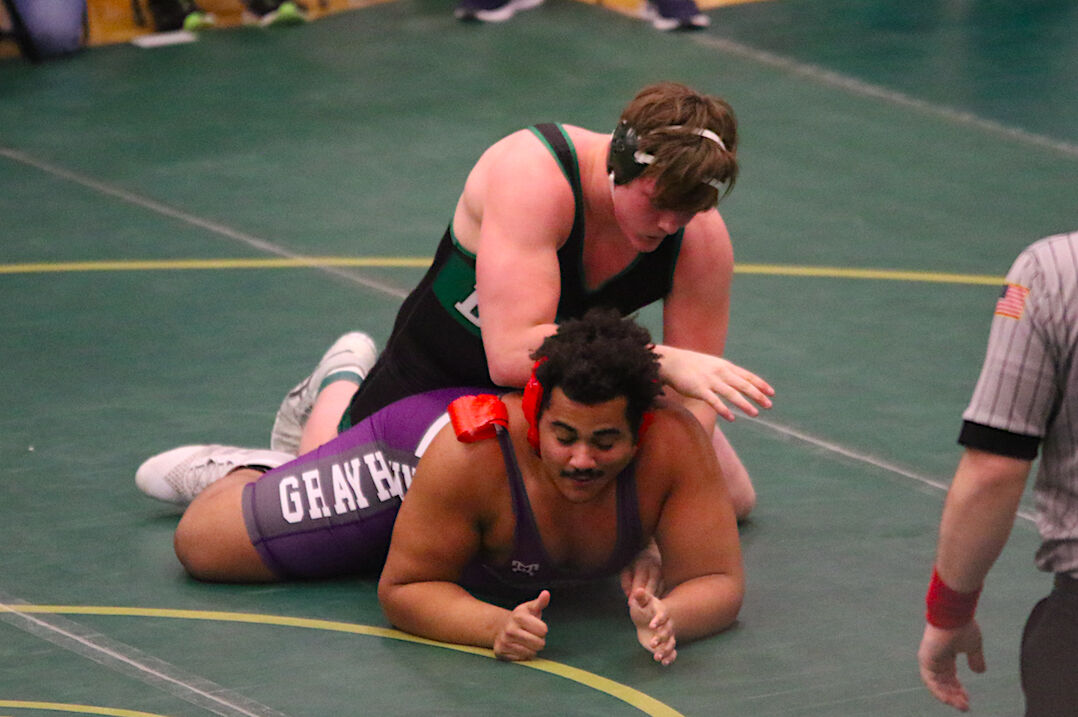 Pella's Kody Huisman (top) goes to work after scoring a takedown in the district title match. 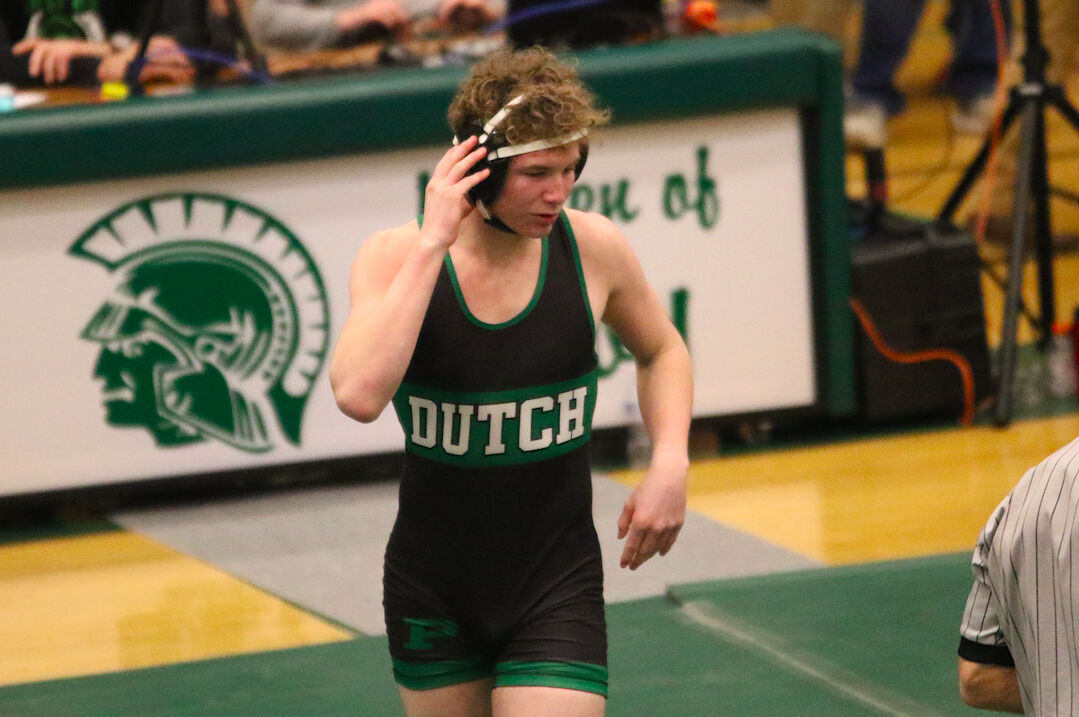 Oskaloosa's Leland Evans (top) gets control during the title match.

Pella's Kody Huisman (top) goes to work after scoring a takedown in the district title match.

IOWA CITY — The heated battle of wrestlers from eight different schools all vying for a limited spot at this year’s state wrestling tournament provided an oasis from the frigid temperatures outside. Three local boys punched their tickets to Wells Fargo Arena on Saturday with Oskaloosa’s Leland Evans (23-8) and Pella’s Kody Huisman (20-8) both earning district title for their return trips from a year ago while No. 10 Ryan Van Donselaar (31-7) secured his first trip for the Dutch.

Evans started the day as the top seed at 145 pounds, earning a bye to the semifinals. There would meet Pella’s Jackson Van Kley (21-19) and score a first period fall to advance to the finals. Evans would dominate the championship match against Ryan Ott (11-3) of IC City High, scoring at will on his way to a 16-1 tech fall and a district title. Evans will return to the state tournament, where he finished 1-2 a year ago.

Huisman drew the top seed at 285 and a bye to the semifinals as a result. The big fella did not waste much time, using his power to earn a pair of first period falls. First in 36 seconds against Oskaloosa’s Warren Feudner (15-22) in the semifinals and then in 1:09 against Burlington’s Julius Harris (5-1) in the championship match to claim the district title. Huisman also makes his return to Wells Fargo Arena for a second straight year, going 1-2 in 2020.

Van Donselaar was denied a wrestleback opportunity a year ago and settled for third place. This year he would get that wrestleback after a nice run to the finals. The 160-pounder rolled his way to wins by fall in the quarterfinals and semifinals to get to the first place match against Trestin Sales (18-3) of Burlington. Sales would pin Van Donselaar in a spirited bout and would send him to a wrestleback against IC City High’s Gable Mitchell (6-3) with the winner going to Des Moines. Van Donselaar looked to be on his way to a potential tech fall with a 11-0 lead in the second period when he signaled to the referee that Mitchell bit him. After a conference with the other ref and both wrestlers, the referee disqualified Mitchell and Van Donselaar was on his way to Wells Fargo Arena.

For Oskaloosa, outside of Evans, it was a tough day for the Indians as no other wrestle finishing in the top three.

Oskaloosa had a trio of fourth place finishers on the day. Trey Miller (126, 15-13), Garisin Hynick (152, 14-17) and Feudner (285) all won their quarterfinal matches before losing in the semifinals and third place bouts.

Pella was very close to sending more than two wrestlers to state as they had six boys end up in third place.

Van Kley, Quinn Rhamy (10-8) and Ethan Milligan (19-22) all had thrilling wins by fall in the quarterfinals as all three were trailing in their matches before earning pins.

Van Kley (145) and Rhamy (152) would both work their way to wrestlebacks for a chance to go to state with a win.

Van Kley would battle IC City High’s Ryan Ott in the wrestleback. Van Kley would trail 2-0 after one period with Ott scoring a late three-point near fall in the second period to go ahead 5-2 heading to the third. A reversal and near-fall in the third saw Van Kley tie the match at six as the two would head to sudden victory. Ott would score a double-leg takedown in the sudden victory to win the match and give Van Kley a third-place finish.

Rhamy faced off against Ottumwa’s Zachariah Shoemaker (39-8) in his wrestleback at 152 pounds. Unfortunately, it was a good showing from Shoemaker as he would roll to a 16-1 tech fall to give Rhamy third place.

The host, Iowa City West, won the team race with 237 points behind eight district champions. Pella finished in a strong second place with 179 points with Oskaloosa taking seventh with 90.5 points.

The State Wrestling Tournament starts on Thursday at Wells Fargo Arena with Class 1A starting at 9 a.m., Class 3A at 1:30 p.m. and Class 2A at 6 p.m.