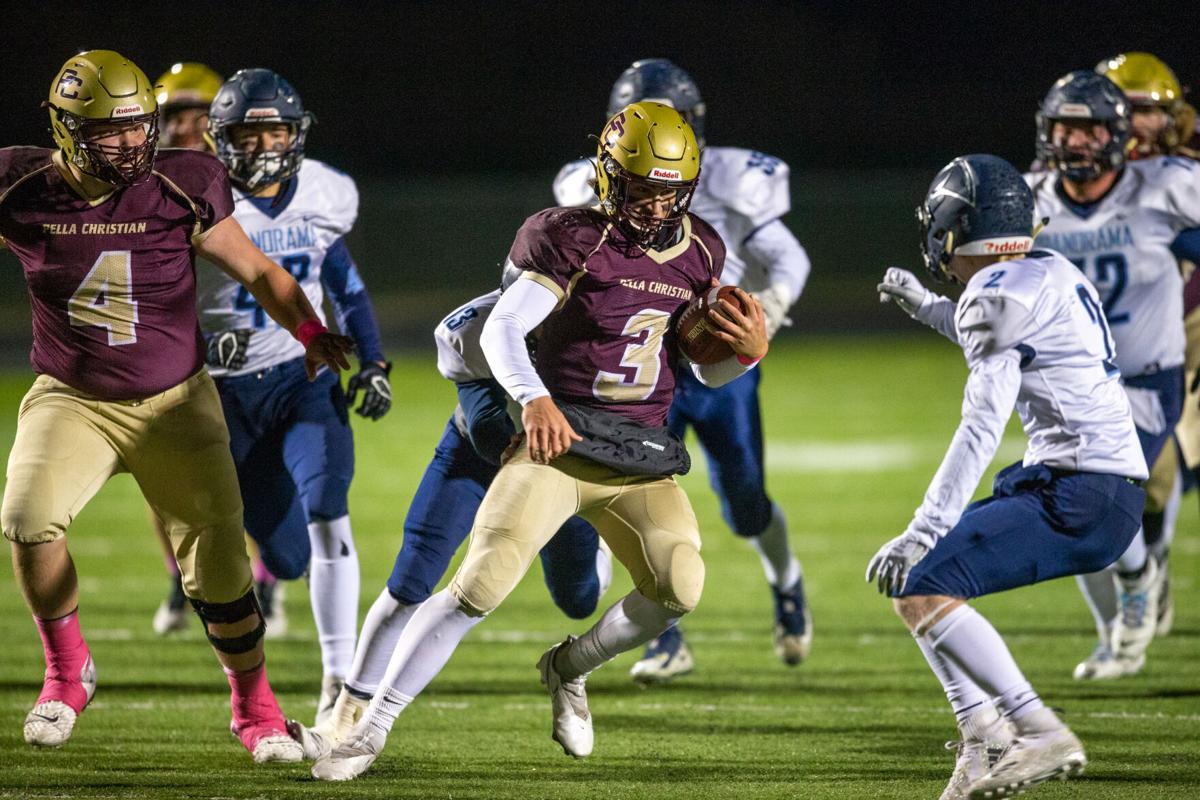 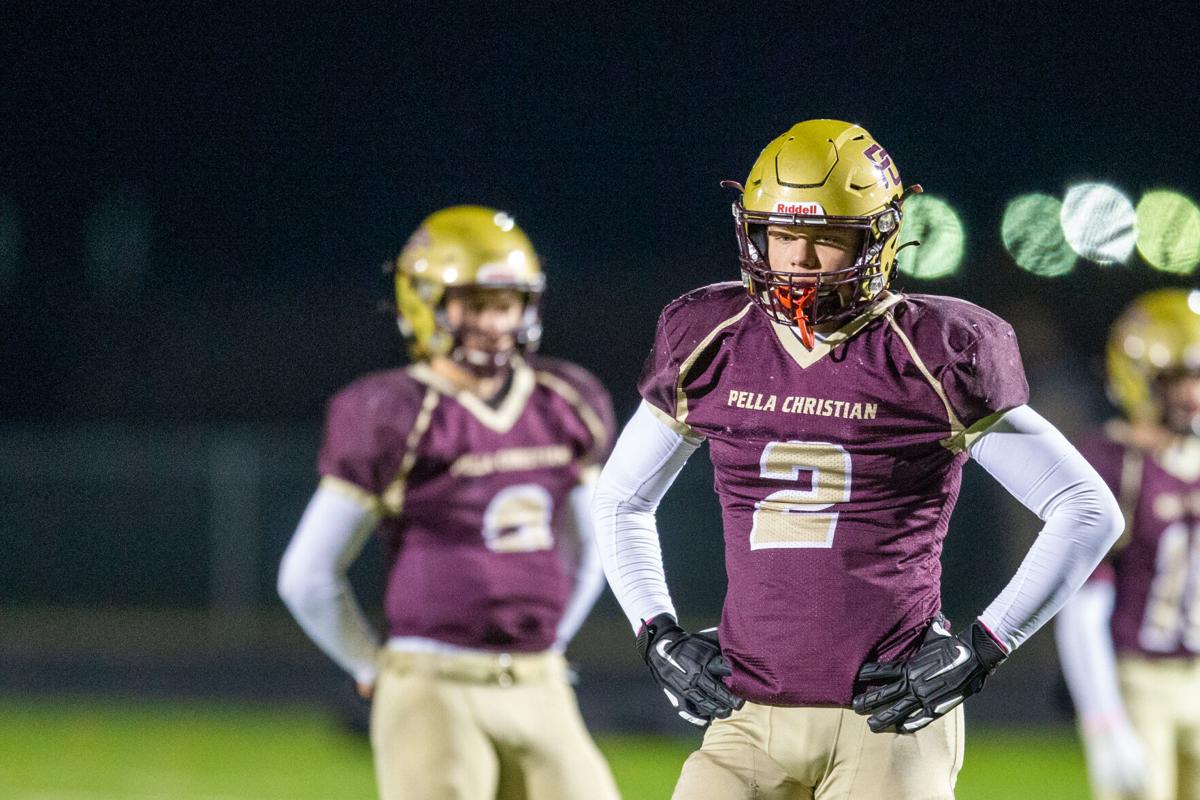 Pella Christian's Luke Mulder (2) gets ready for a play against Panorama. 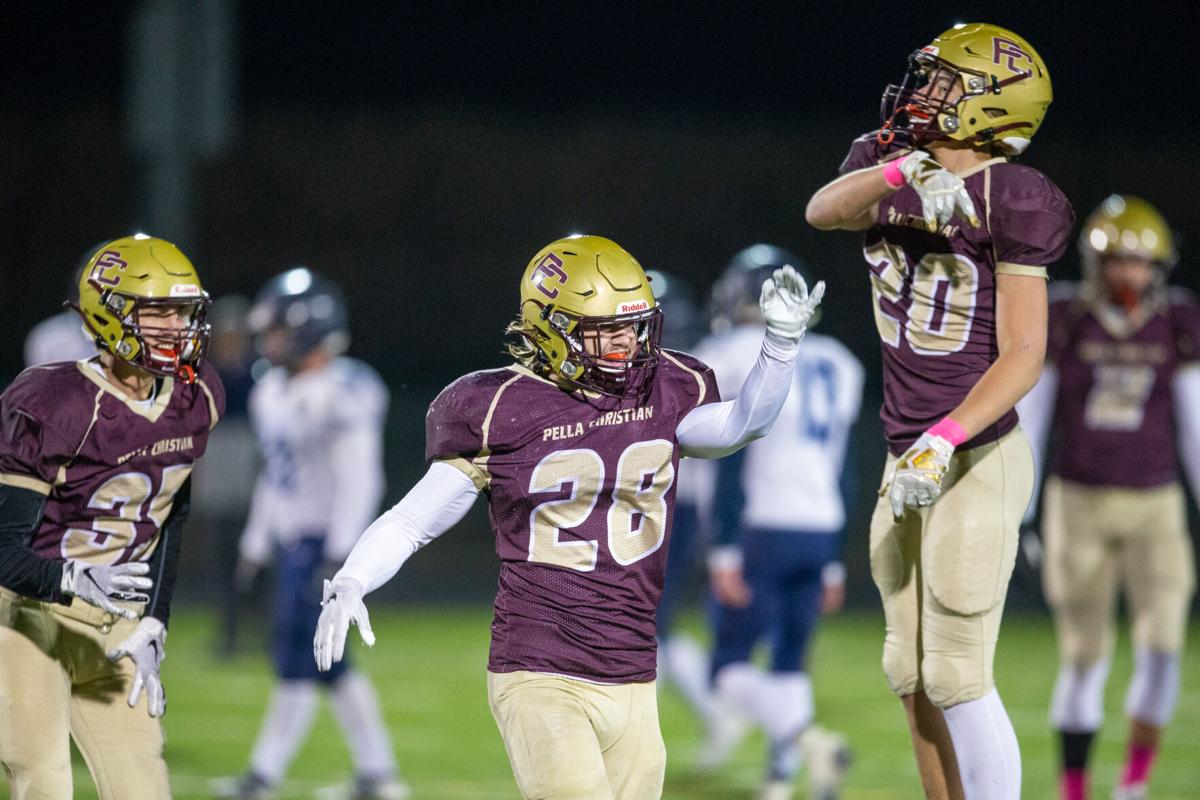 Pella Christian's Cody Boender (28) and Drew Geetings (20) celebrate during a game against Panorama.

Pella Christian's Luke Mulder (2) gets ready for a play against Panorama.

Pella Christian's Cody Boender (28) and Drew Geetings (20) celebrate during a game against Panorama.

Kacmarynski, a sophomore, was voted as the Offensive MVP of the district. In his first year as starting quarterback, Kacmarynski improved as the year went on, passing for 1,311 yards and 14 touchdowns against five interceptions. He also used his legs as a threat, finishing second on the team with 623 rushing yards and seven touchdowns. Kacmarynski was also impressive defensively, finishing with 51.5 tackles, one sack and one pick-six.

DeVries, a senior, anchored the Eagle offensive line. He helped an offensive that scored nearly 27 points per game and was the leading passing team in the district.

Luke Mulder, a senior, had himself a heck of a final season for PC. The defensive end finished second on the team with 69 tackles this season. He also broke a couple of school records on the way, his 7.5 sacks made him the all-time career sacks leader in Eagles history with 15 while his 21 tackles for loss also broke a school record.

Boender, a senior, also broke a school record along the way this season. The linebacker was a tackling machine this season, finishing with 102.5 tackles including 85 solo tackles. His 102.5 tackles led 1A going into this week’s state quarterfinals. He also had a team-high three interceptions. Boender was also the team’s leading rusher with 841 yards and 12 TDs.

Geetings, a junior, had a good year on the backend of the Eagles’ defense. The defensive back had 31 tackles and wasn’t afraid to attack downhill with 6.5 tackles for loss. He had one interception this season, which he made the most of as he returned it 80 yards for a touchdown. Geetings was also a deep threat offensively with six catches for 174 yards and two touchdowns.

Van Dyke, a senior, had a good year at wide receiver for PC. He finished second on the team with 20 catches for 417 yards and four TDs. Defensively, he chipped in 9.5 tackles and had one interception.

Eric Mulder, a junior, was voted to the second team utility role and he really could’ve made it for either offense or defense. On offense, the 6-foot-7 receiver led the team with 32 catches for 461 yards and six touchdowns. On the other side of the ball, the safety racked up 42.5 tackles with two fumble recoveries and one interception.

Fancher, a sophomore, served as PC’s kicker this year. He was 30-for-32 on PATs and had eight touchbacks while missing his only field goal attempt of the season.

Kelderman, a junior, was active on the defensive line for the Eagles. He finished with 17.5 tackles including 5.5 for loss.

Spronk, a junior, was another good defensive back for Pella Christian this season. He tallied 21 tackles to go along with two interceptions and also chipped in offensively with 13 catches for 221 yards and two touchdowns.

Stoltz, a sophomore, served as the Eagles’ punter this year. He had the most punt yards in the district and was third in average at 35.7 yards per punt.

Grant Alsum, Kyle Branderhorst and Justin Horn were all honorable mentions for the Eagles, who finished 6-4 while recording their 13th consecutive playoff appearance.