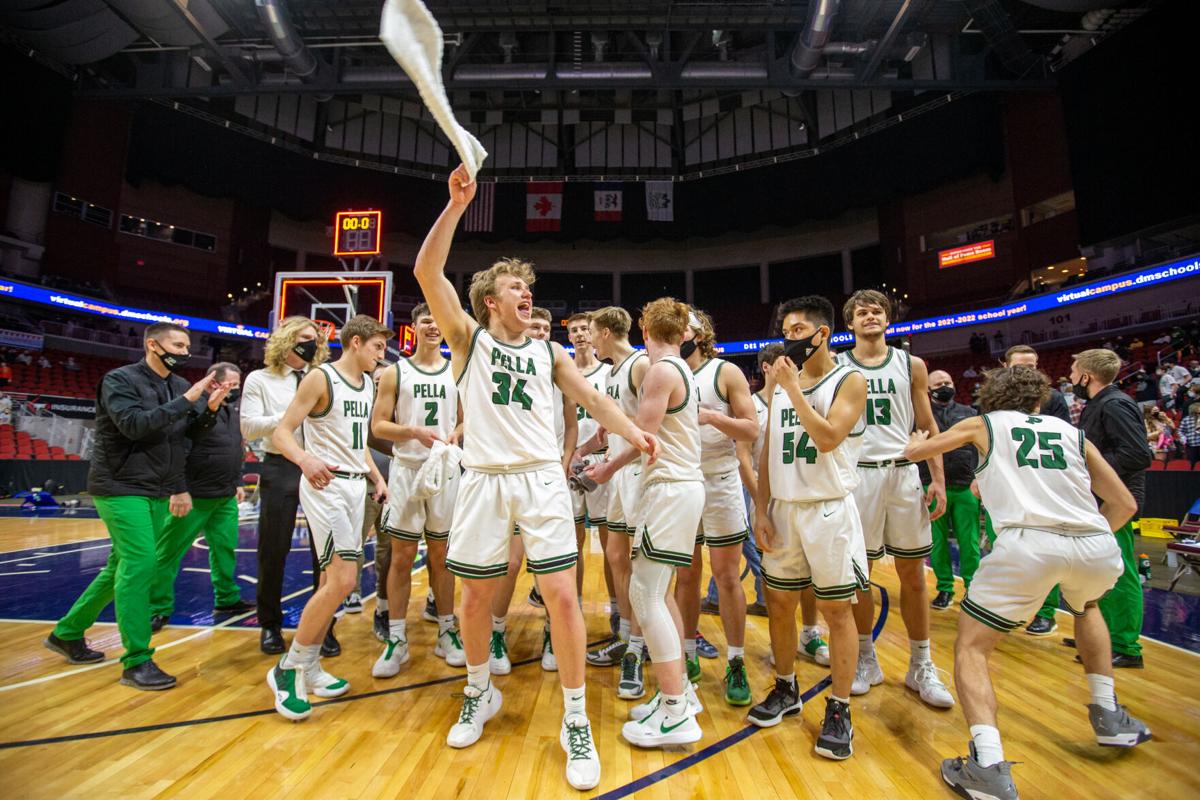 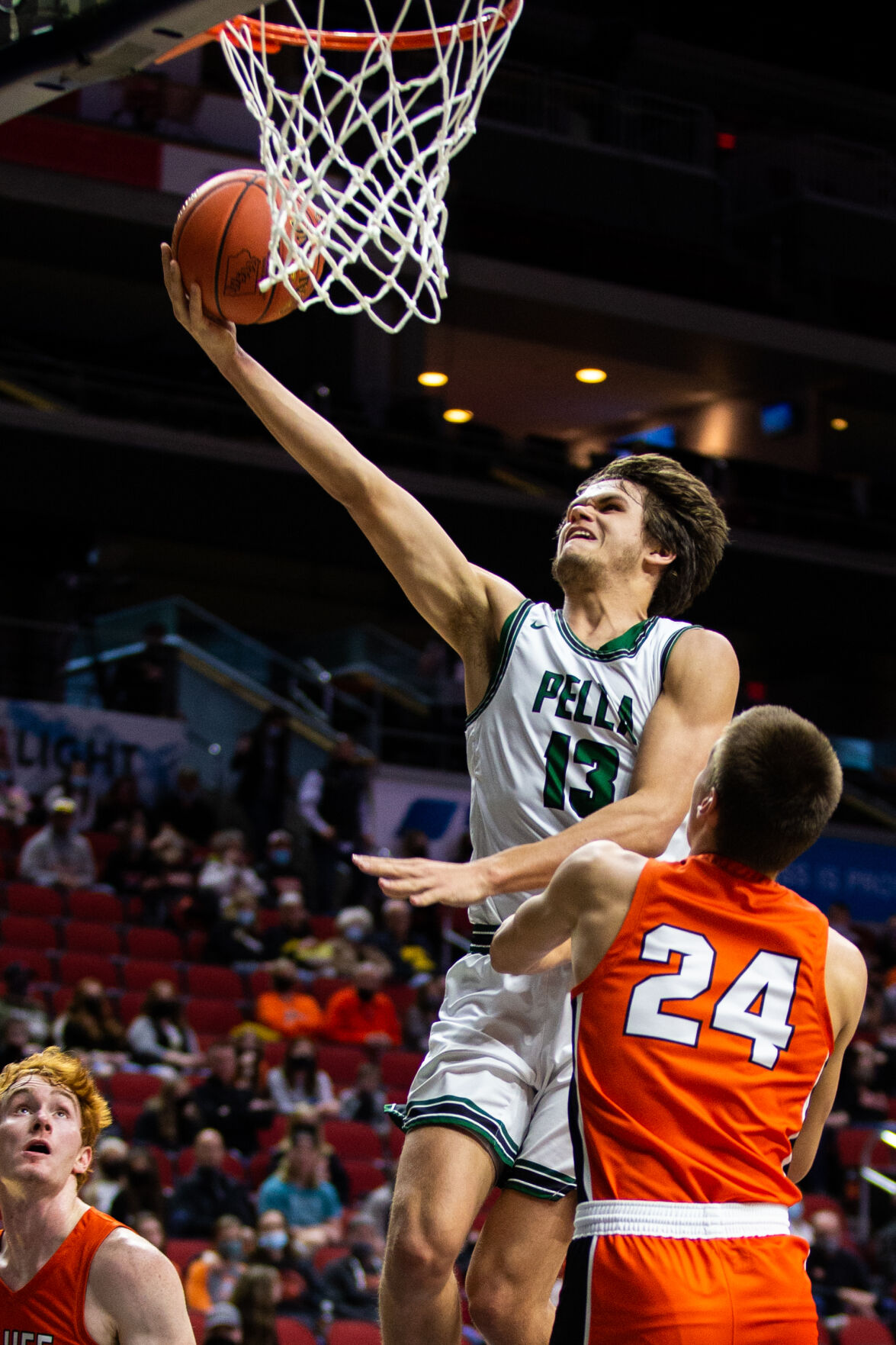 Pella's Karl Miller (13) goes for a layup during Thursday's Class 3A semifinal matchup against Sergeant Bluff-Luton. Miller led scoring for the Dutch with 14 points. 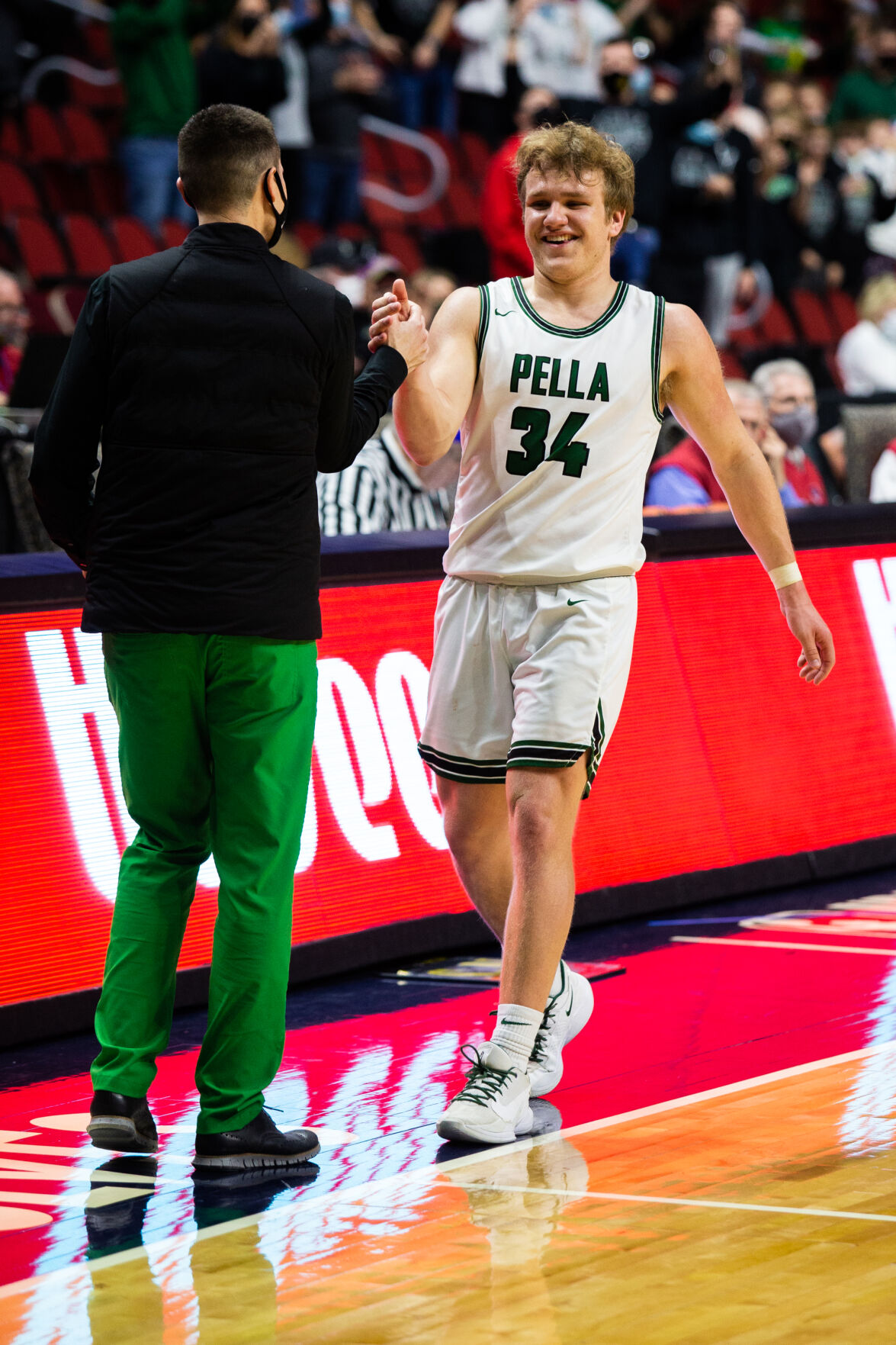 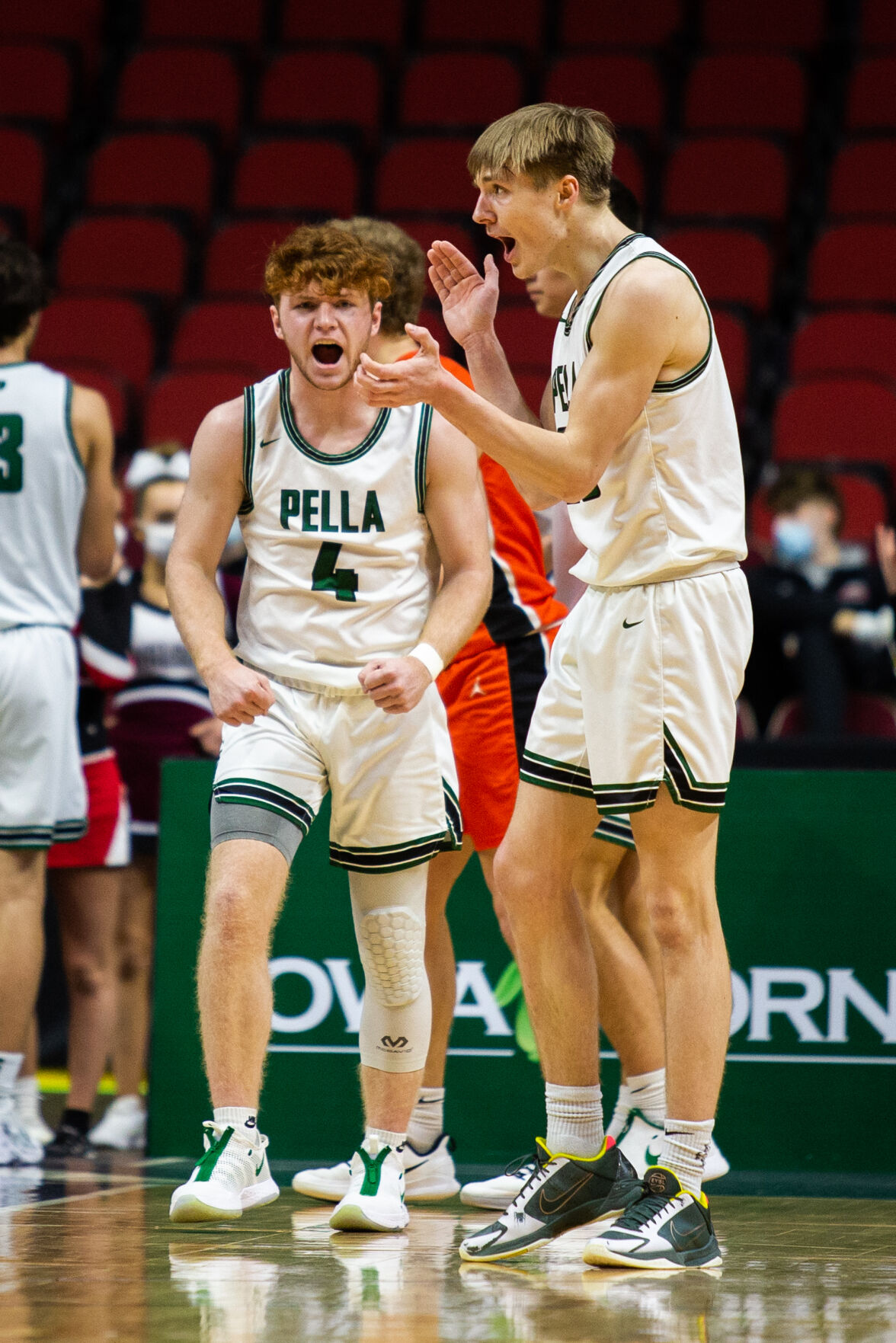 Pella's Noah Allen (4) and Parker Elder (23) celebrate after a defensive stop in the second quarter of Thursday's semifinal game.

Pella's Karl Miller (13) goes for a layup during Thursday's Class 3A semifinal matchup against Sergeant Bluff-Luton. Miller led scoring for the Dutch with 14 points.

Pella's Noah Allen (4) and Parker Elder (23) celebrate after a defensive stop in the second quarter of Thursday's semifinal game.

DES MOINES — The suffocating defense of the Dutch struck again. No. 2 Pella (24-2) locked in their spot in the Class 3A state title game after rolling to a 46-32 victory on Thursday night over No. 6 Sergeant Bluff-Luton (17-8). Once again it was the high-scoring Dutch doing it with their defense as they avenged last year’s quarterfinal loss to the Warriors.

“I thought the biggest thing last year to this year was our defense,” Pella head coach Derek Schulte said. “I thought last year they took us completely out of our rhythm and they did that tonight, too. “It was a very low scoring game, we just weren't at a defensive level, where this year you could see our commitment on that end. We really battled in the first half on the boards and we were able to get a couple stretches where we could get in transition and find a couple open shots.”

SBL started with a slow pace off the tip as they used up a full minute on the clock before Nick Muller cashed in a corner three.

After the Warriors held a 5-3 lead midway through the first, Pella cranked up the tempo with defense turning to offense. Four first-quarter turnovers for SBL guided the Dutch to finish the quarter on a 7-0 run.

Pella got a two-handed jam from Parker Elder in transition before getting an elbow three from Grant Nelson and a pull-up jumper from Noah Allen to go in front 10-5 going to the second.

The Dutch defense was locked in all half as they forced 10 Warrior turnovers while only coughing over two turnovers themselves. Nelson added a three late in the second as Pella took a 17-12 lead into the half despite shooting just 26% from the floor and 3-of-14 from deep.

Both teams were able to find a bit of a groove in the third as Miller went for seven points in the frame. The Dutch took a lot of momentum at the end of the third as Elder hustled back to get a huge block at three-point line in transition, leading to a Miller layup that spooned in on the other end at the buzzer to put Pella in front 30-21 going to the fourth.

SBL upped the pressure in the fourth but Pella was able to hold steady, pass out of the pressure and attack the rim when it was open. The Dutch grew their lead to double digits and would take care of the ball from there as they closed it out for the victory.

Miller would lead the charge with 14 points and eight rebounds while Nelson finished with 13 points and four rebounds. The Dutch were able to battle on the glass and only finish a minus-four to SBL while going 7-of-9 from the free throw line.

Turnovers were huge in the contest as Pella finished with a 16-8 advantage in that area while holding SBL to 29% shooting from the field and 3-of-17 from three. Elder did the majority of the defense on the 6-foot-10 Majouk while Josh Warner locked in on the 6-foot-8 Layman.

“We have two outstanding defenders Josh and Parker,” Miller said. “They’re very good on-ball defenders. And then we have great help on the other side to really help them out.”

“We just needed to take their top two guys out of it,” Nelson added. “We needed to try to have them play our style of basketball. And so once we got them frustrated a little bit, have them fall into the trap of our defense, we kind of had it rolling. We had great communication and great grit from our guys. We don’t have the best size but we play with a lot of passion and grit. It’s always fun to go out there and battle with them.”

Pella will meet the top-seeded Ballard in the championship game. For a senior like Nelson, he now knows this will be his final game for the green and white.

“Every day in, day out, this is what we work for. This is what we dream for,” Nelson said. “As a kid, you want to play in that state championship game so it’s great for a dream to come true and I can't wait to play for Pella and play against a great team.”

The game will feature the top two scoring teams in 3A as both average over 70 points while Pella will have played the top three defenses in class at state after Friday’s game against Ballard.

“They are a really good offensive team and like the score but they're also a great defensive team,” Schulte said of Ballard. “I think both teams want to get up and down, there'll be a defensive element tomorrow and the team that plays the best defense and win the rebounding battle is gonna be the team that wins this thing.”

Miller said the team will get a pasta meal tonight before getting some massages and try to get some sleep before getting back on the hardwood in less than 24 hours.

“It feels great, to be honest,” Schulte said on reaching the finals. “I'm not sure it's sunk in yet. And I think as a coach you're already thinking, we got to get to work here on some prep we got an excellent team to play on Friday. Let the guys enjoy it tonight, take care of their bodies and we'll come back after it and I know we’ll play extremely hard tomorrow.”