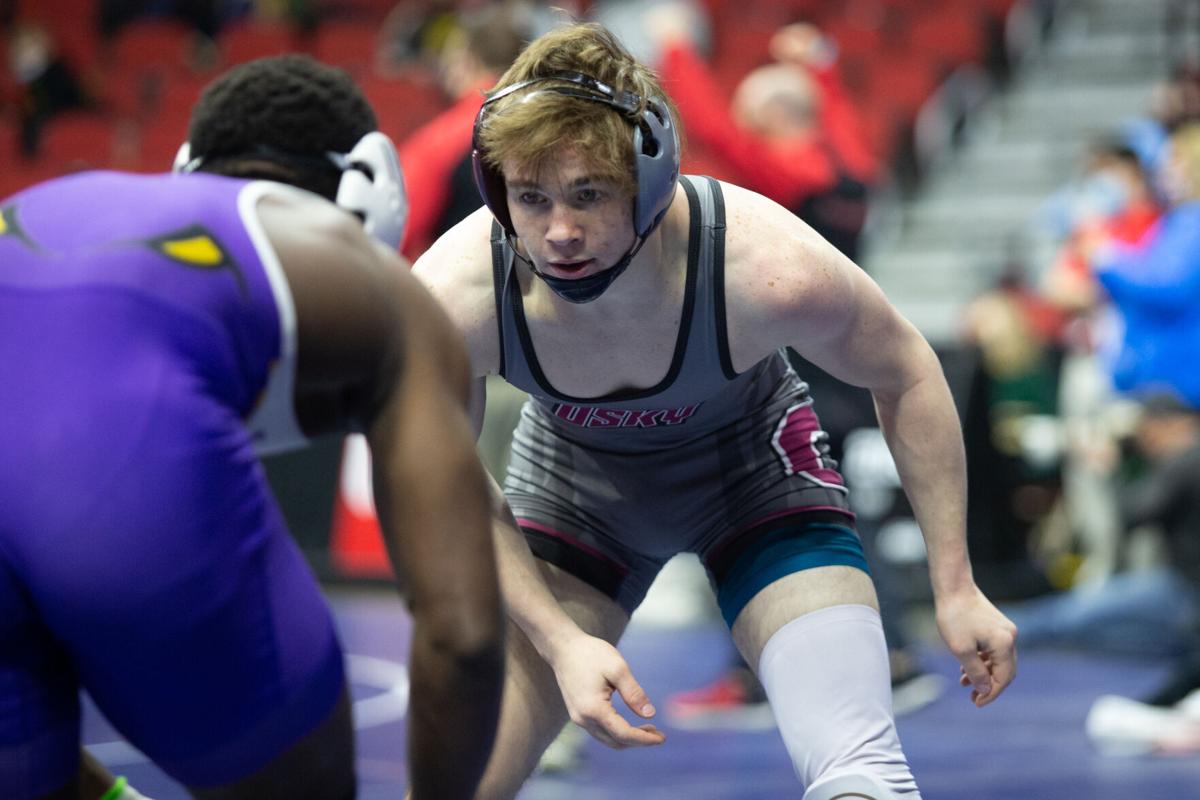 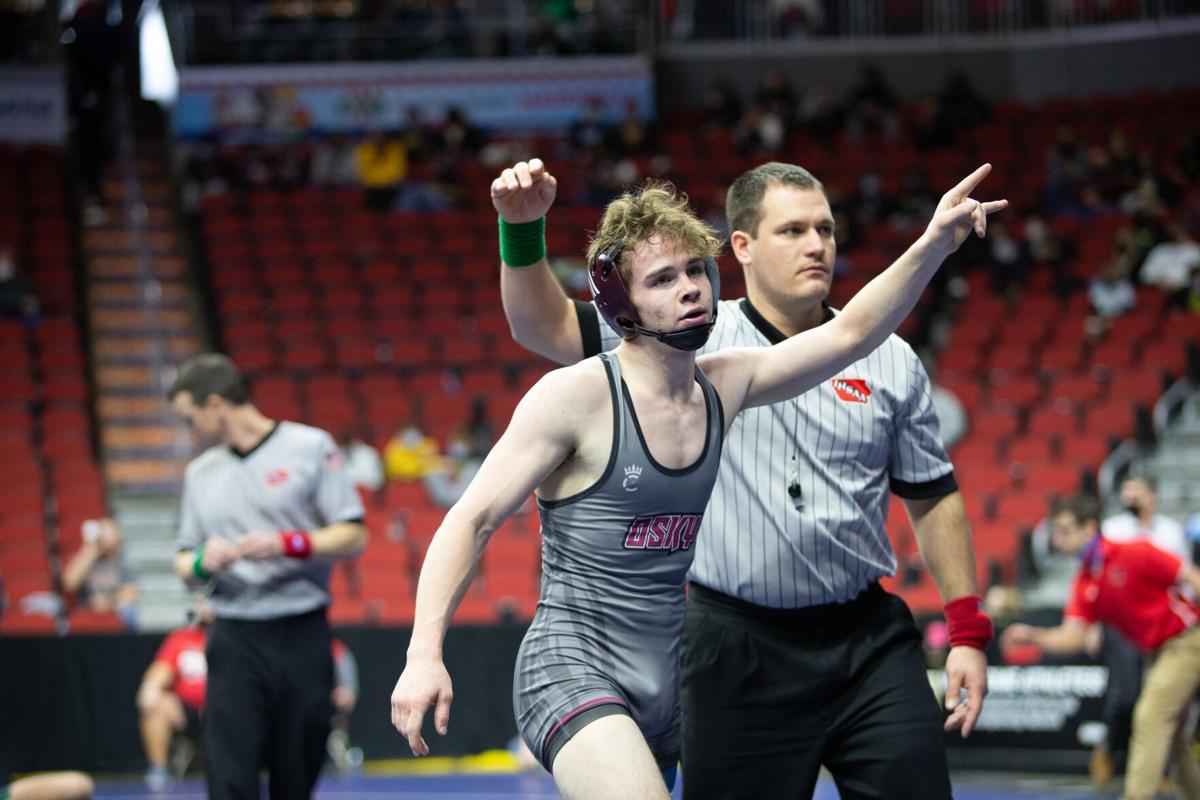 Oskaloosa's Leland Evans celebrates his victory at the State Tournament. 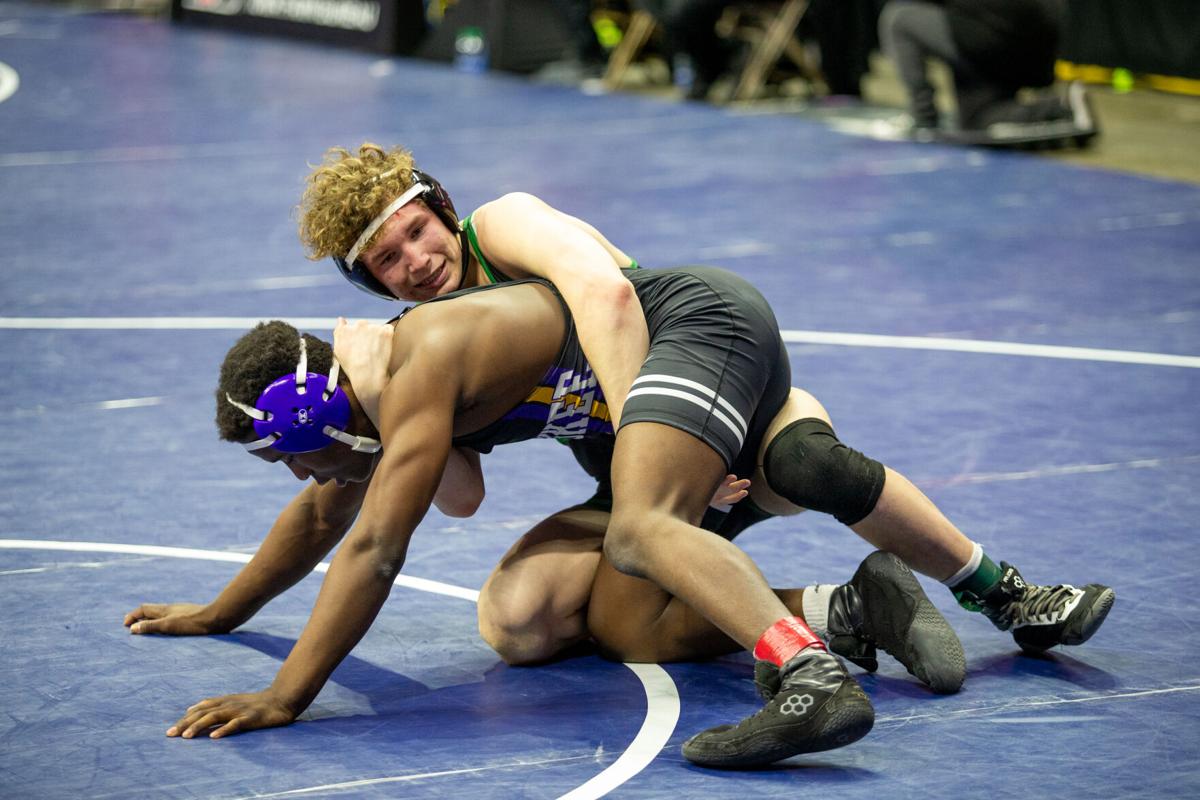 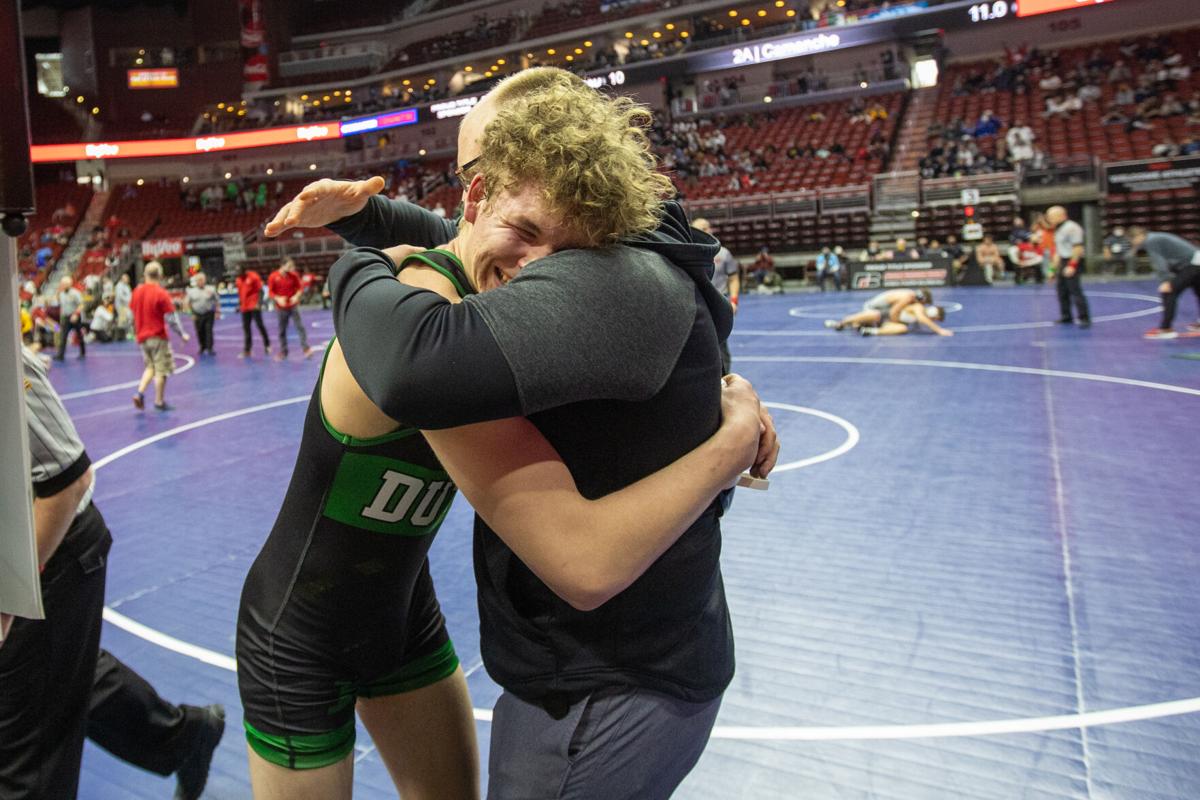 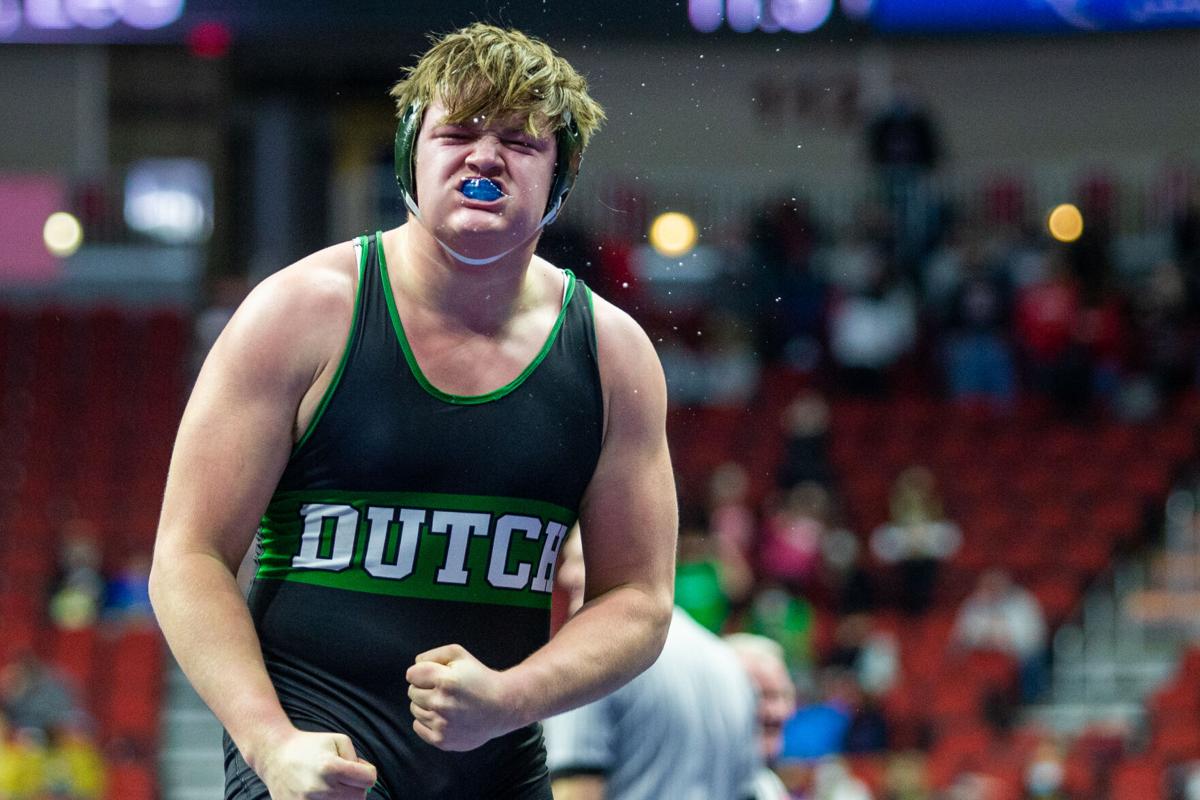 Pella's Kody Huisman celebrates after getting a fall. 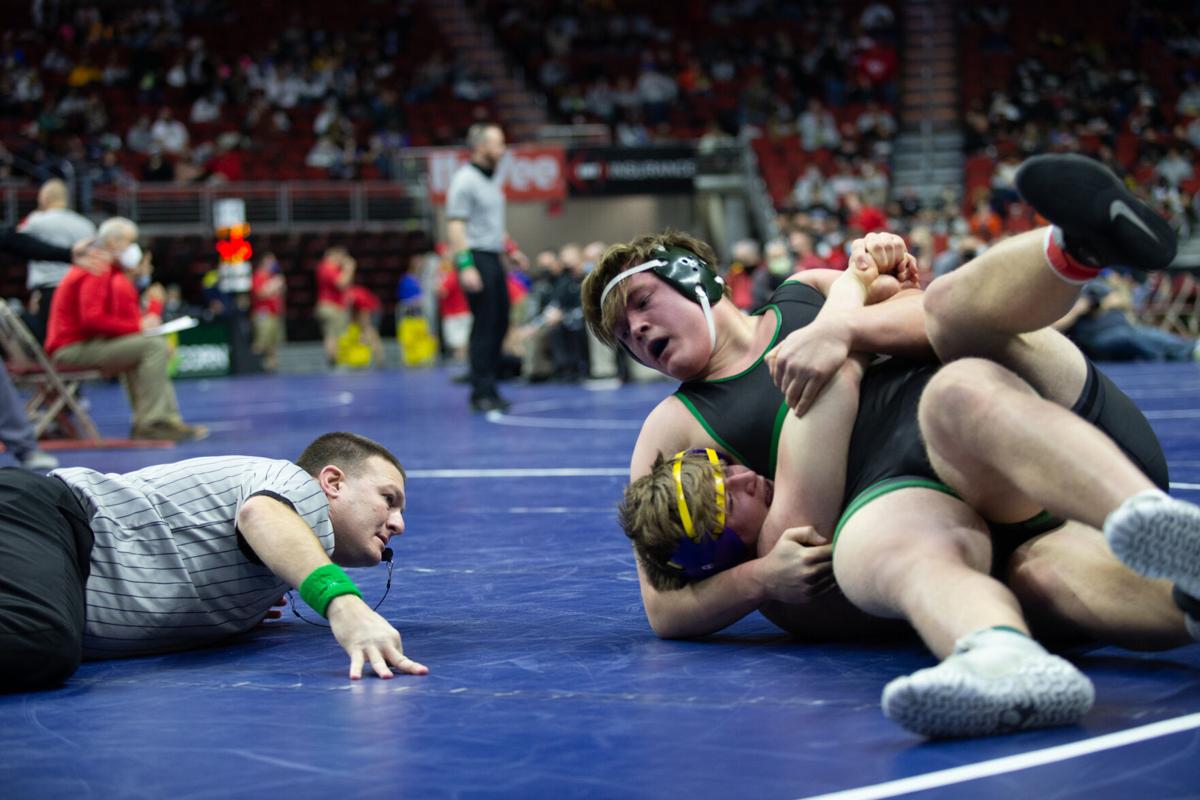 Pella's Kody Huisman (right) tries to squeeze his opponent for the fall.

DES MOINES — Everyone wants to leave the State Wrestling Tournament a champion, but nobody can take away the fact that three area seniors secured their first state tournament medals. Oskaloosa’s Leland Evans (145) and Pella’s Ryan Van Donselaar (160) took sixth at their respective weights while Kody Huisman (285) ended in eighth after wrapping up consolation matches at the State Wrestling Tournament at Wells Fargo Arena on Saturday.

Evans (26-11) started his week against Josiah Schaetzle (13-3) of Dubuque Hempstead. The Oskaloosa senior wasted little time scoring a single-leg takedown right off the whistle and would go to work. Schaetzle would score a very late escape as time was expiring in the first period.

Evans would bounce back nicely in his first consolation match against Dalyn Mull (23-17) of Marion. Evans scored a pair of takedowns in the first period to go ahead 4-1. The second period was full of action as the two exchanged takedowns with Mull evening garnering a two-point nearfall to take an 8-7 lead. Evans was able to squeeze out of the situation for a reversal before knocking down Mull and getting on top of him for the fall to advance to Friday for a second straight year.

Evans would need a win against Peter Erickson (19-7) of Johnston to stay alive in the tournament on Friday.

The two were showing off a great display of athleticism as both had opportunities to score on scrambles but were able to fend each other off for a 0-0 first period.

Evans started the second period on top with Erickson escaping midway through the round before Evans scored a takedown to go ahead 2-1.

Evans elected to start the third period down but Erickson would let him up to make it 3-1. Erickson would try shot after shot but Evans held strong and was able to fend him off for the 3-1 decision and secure himself a medal and a spot in Saturday morning’s matches.

But before Saturday he had one more placement match on Friday night against Brent Slade (30-6) of Ames. After earning a takedown in a scramble situation early in the first, Evans was able to hook Slade and turn him for the first period fall to keep him alive in the race for third.

Evans had a tough start to his final day, going up against Christian Stanek (38-1) of Cedar Rapids, Xavier. This would be a hard-nosed match with both wrestlers being really sharp defensively.

It was tied at zeros after one but Stanek started the second down and would get the escape for what would be the only point of the match. Evans couldn’t score the rest of the way in the second and Stanek would ride him out the entirety of the third to send Evans to the fifth place match.

There Evans would get a rematch against his first round opponent, Josiah Schaetzle of Dubuque Hempstead. Both wrestlers played it fairly safe for the opening period as it ended without a point being scored.

Action picked up in the second with Evans on top trying to throw Schaetzle but getting reversed. Evans would later escape to cut the deficit in half to 2-1 heading to the third. Evans started down and got into trouble with a three-point nearfall before flipping out of it for a nice reversal.

With the score at 5-3, Evans would try for a turn but Schaetzle held him off for the win as Evans would settle for a solid sixth place finish while finishing his second tournament run with a 3-3 record.

Van Donselaar (34-10) opened up against Jermaine Sammler (18-13) of Waukee. Sammler did all of his damage late in periods. After going back and forth, Sammler scored a takedown right as time was expiring in the first.

Van Donselaar started the second on top and was riding out Sammler before a very late escape was awarded to him to push his lead to 3-0 heading into the third. Van Donselaar would take his shots in the third but Sammler would hold him off for the 3-0 win and push Van Donselaar to the consolation bracket.

Needing a win to advance, Van Donselaar was locked in for his match against Dakota Lau (17-9) of Western Dubuque, Epworth. Van Donselaar avoided a single-leg takedown from Lau and was able to turn it into a takedown of his own before riding it out for the rest of the first period.

Van Donselaar would start the second down but a quick escape and takedown put him in the driver’s seat at 5-0 before getting another takedown in the third period on his way to a 7-0 decision and ticket to Friday’s consolation rounds.

Van Donselaar (33-8) had a grinder of a match in his bloodround against Kasey Ross (25-6) of Urbandale.

Ross was able to hold tight clinches early to try to tire Van Donselaar early and wrestle defensively. Van Donselaar started the second period down and was able to earn the quick escape before Ross continued with his defensive clinches.

Ross started the third down but would squeeze out the escape halfway through to tie it up at one before sending it to sudden victory.

Neither wrestler would leave the clinch in sudden victory as the match made its way to the tiebreaker. Van Donselaar started up and would hold down Ross for the duration of the first tiebreaker.

Now with the ball in his court, Van Donselaar just needed to escape. Instead, he was able to shift his body for the reversal and a three-point nearfall to snatch a 6-1 decision and advance to Friday night where he wouldn’t have to wrestle due to his opponent having to medical forfeit.

Van Donselaar wrestled against Deven Strief (25-5) of North Scott to start off his Saturday. Strief, who appeared to be well under-seeded as an 11-seeded with his great tournament run finishing in third place, continued to show strong as he picked up a couple first period takedowns to go up 4-1 on Van Donselaar.

Another takedown and three-point nearfall for Strief put Van Donselaar behind 9-1 heading to the third. Van Donselaar would elect for the top to start the third in hopes of getting back points or a pin. Instead, Strief made a nice reversal and earned the win by fall to put Van Donselaar in the fifth place match.

Van Donselaar clashed with Carter Cahill (30-10) of Ankeny Centennial for the right to finish on a high note. After a scoreless first, Cahill would earn an escape and takedown after countering a quick shot attempt on a restart by Van Donselaar.

Van Donselaar entered the third period down 4-0 but started his final period with a nice takedown to cut the deficit to 4-2. Van Donselaar elected to let Cahill up to try to score more takedowns but Cahill would counter his next attempt for a takedown of his own before riding him out for the 7-2 decision.

Van Donselaar took to the podium in sixth place while finishing his good tournament run with a 3-3 record.

Huisman (22-11) did not waste any time in his first match of the 2021 tournament. The usual methodical Huisman picked up Callan Grant (27-13) of Sioux City North and deposited him on the mat before getting on top and claiming the fall in just 18 seconds to advance to his first quarterfinals appearance.

Huisman was looking for a spot in the semifinals as he locked horns with Ben Reiland (14-5) of Waukee on Friday.

This was had more back and forth than a pendulum. Reiland fended off a couple of Huisman takedowns and returned with a takedown of his own followed by a three-point nearfall at the edge of the mat. Huisman would get out of it with an escape and takedown of his own while picking up a three-point nearfall himself. Reiland would slither in a reversal to end the first period ahead 7-5.

The two started the second neutral with Huisman getting a nice headlock takedown as looked to be closing in on the fall with another tight three-point nearfall. But once again it was Reiland squeezing his way out of trouble and reversing Huisman, this time claiming the pin to send Huisman to the consolation bracket with a heartbreaking defeat in a wild match.

Huisman would look to bounce back later in the session against Layne McDonald (30-7) of Waverly-Shell Rock. And bounce back he did.

Huisman scored a couple of powerful takedowns in the first period to burst ahead 4-1. But it was a scramble situation in the second period where Huisman would pounce on top of McDonald and hear the slap of the mat for the fall.

“I wanted to wrestle Saturday so I came out wrestling hard,” Huisman said. “It feels awesome to be back here. I’m honored to make it this far, I’ve been putting in a lot of work and I hope to see it pay off.”

Huisman would come back to wrestle on Friday night against Bryan Jurado (23-7) of West Des Moines, Valley. The Pella heavyweight struck first with a signature power takedown before allowing Jurado to escape. Huisman started the second period on top and was able to get Jurado in a cradle for a two-point nearfall before he escaped to make it 4-2 heading to the third.

The two started the final period neutral with Jurado throwing Huisman to the mat for the takedown. Huisman would then get caught and pinned on a restart for the fall, sending him to the seventh place match.

Huisman only had one match on Saturday and that was for seventh place against Julian Gomez (14-6) of Marshalltown.

Both wrestlers took a couple shots in the first to no avail. Gomez took the lead in the second period with an escape before fending off a couple of shots from Huisman. Gomez then added to his lead in the third a pair of takedowns and a two-point nearfall to take it 7-2.

Huisman takes eighth place and ends his second tournament run 2-3 and with a medal. Not bad for someone who just started wrestling two years ago.