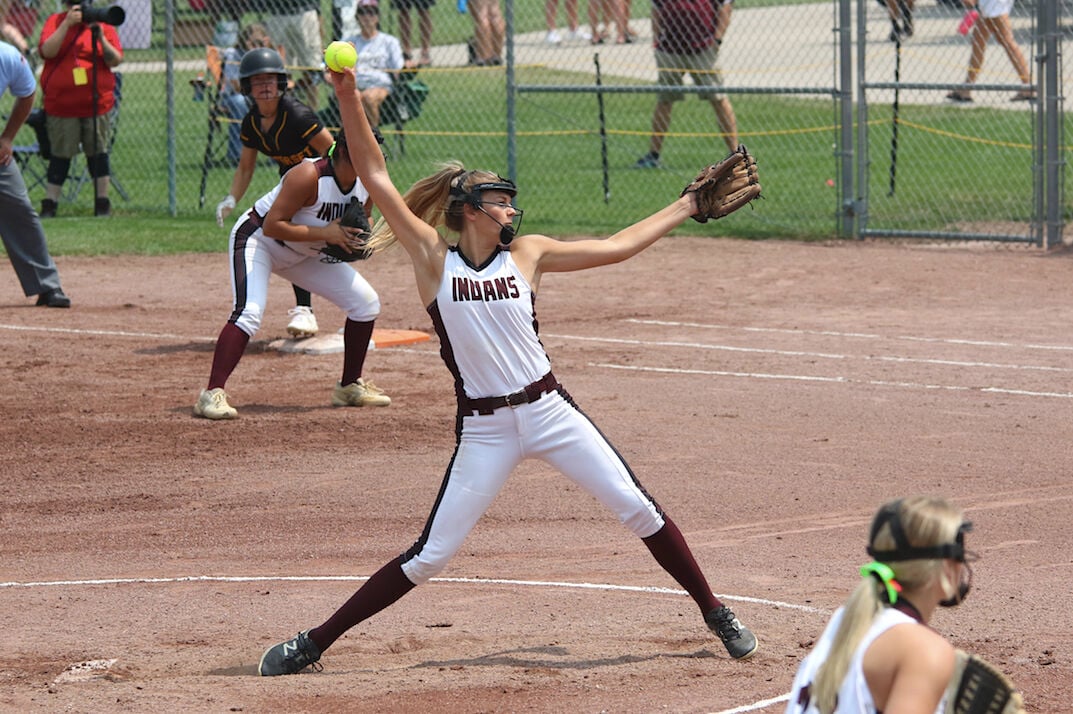 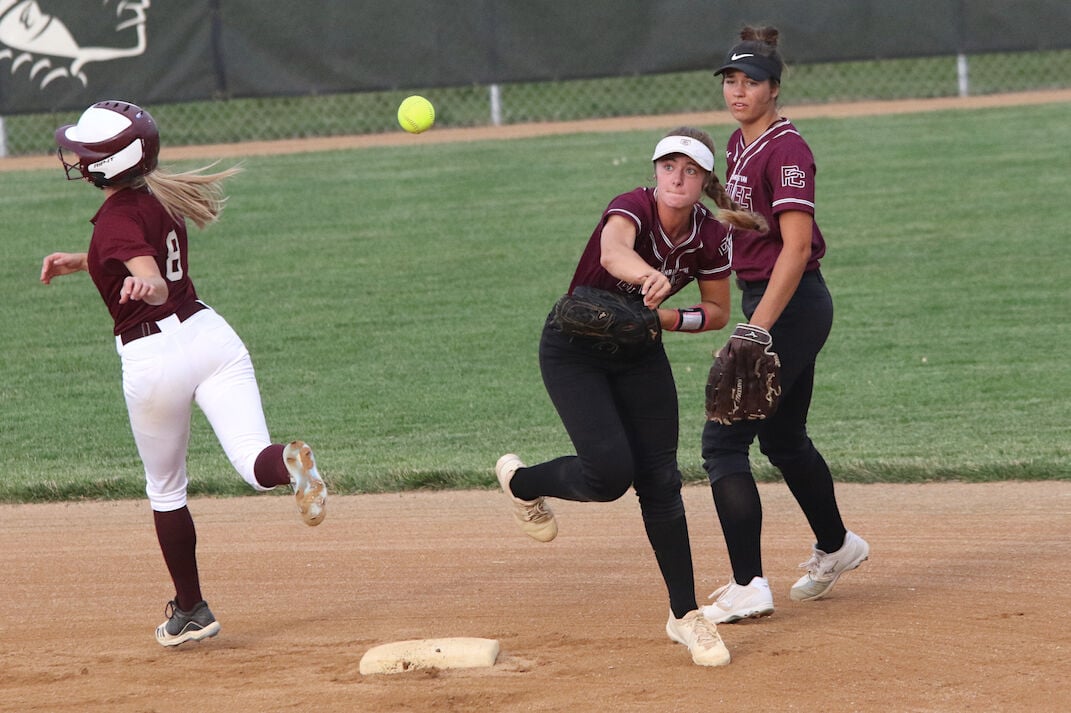 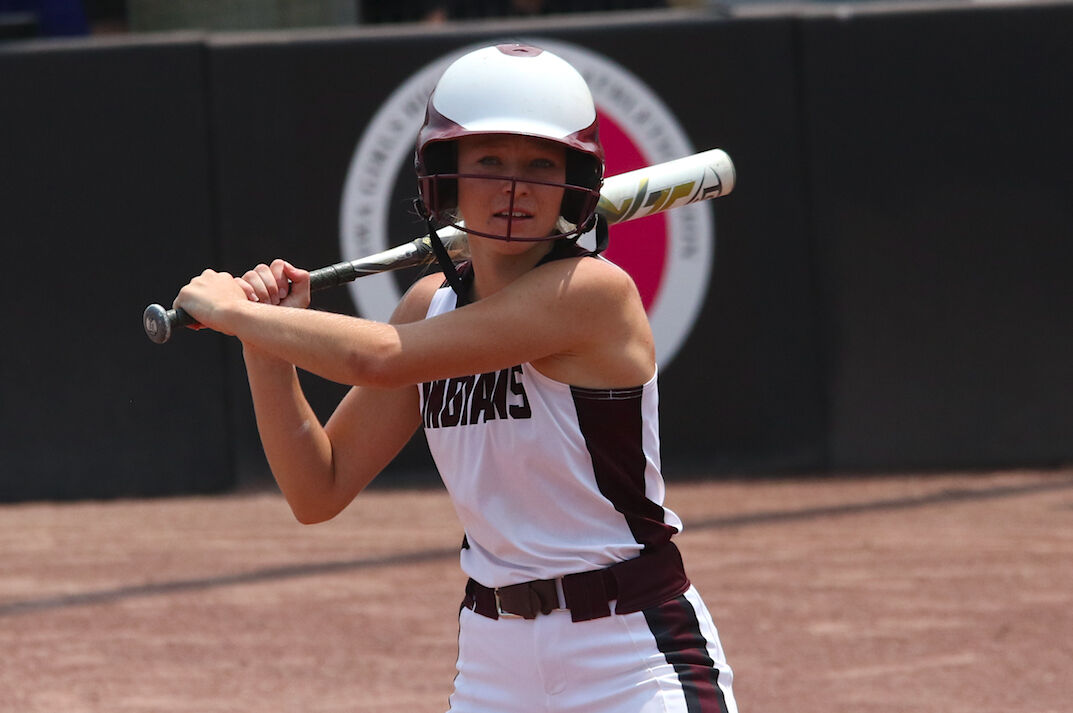 Oskaloosa's Maleah Walker gets ready to bat at state 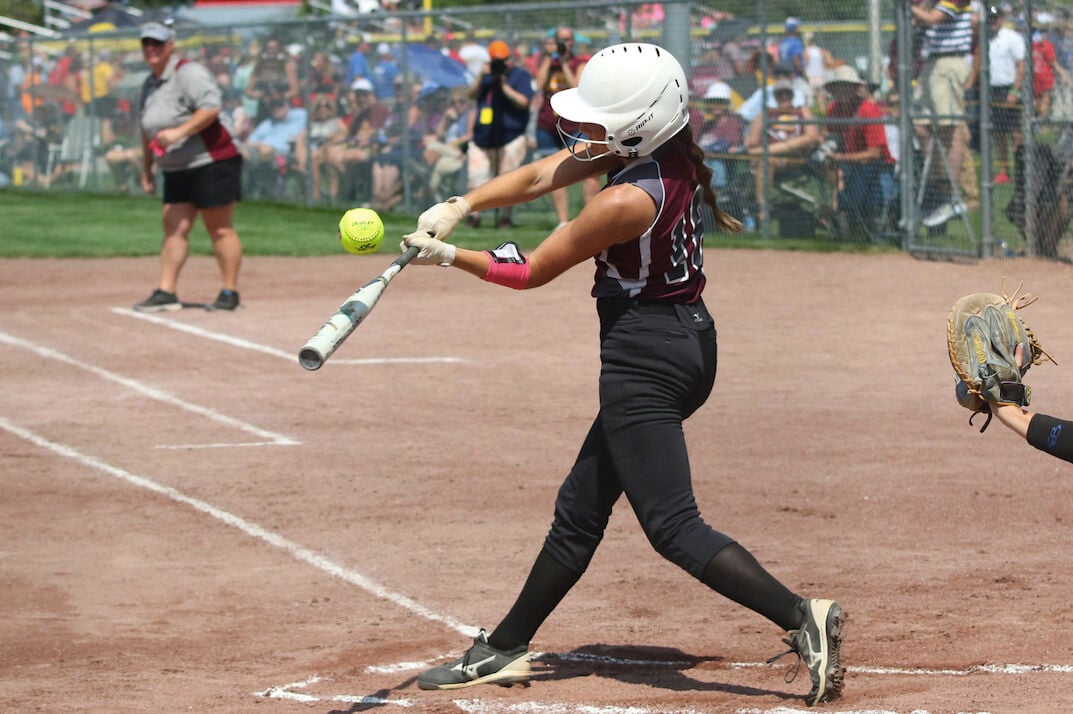 Pella Christian's Emri Agre fouls one off at state 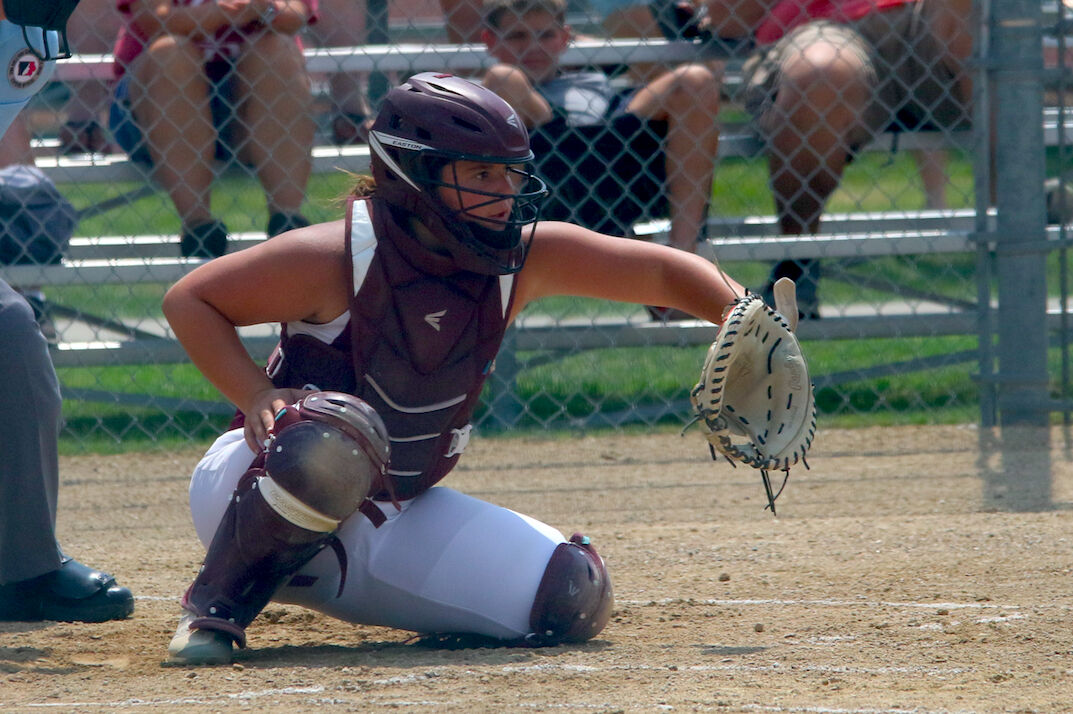 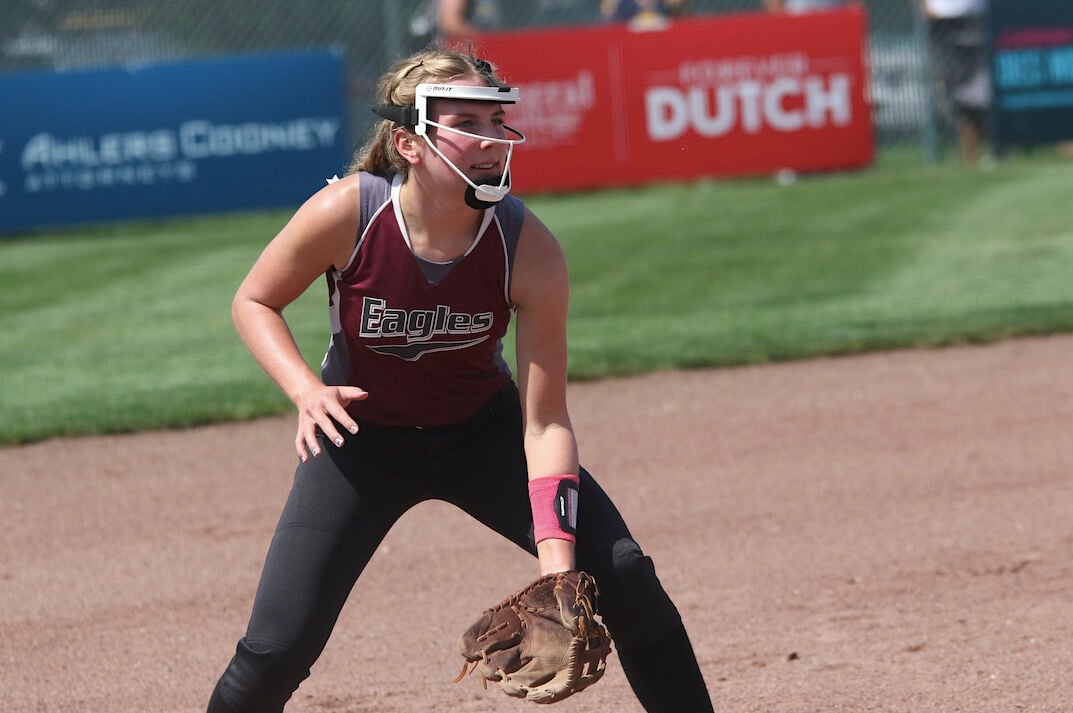 Pella Christian's Bailey Roose gets into a defensive position at state 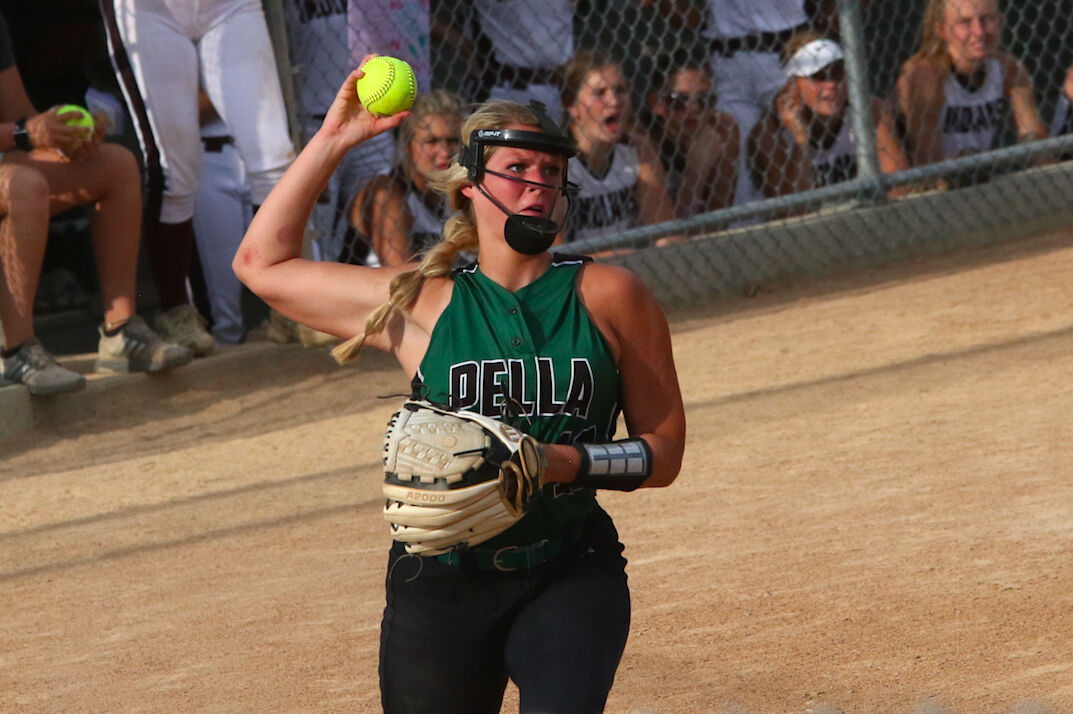 Pella's Kiki Riggen throws out an Osky runner at first 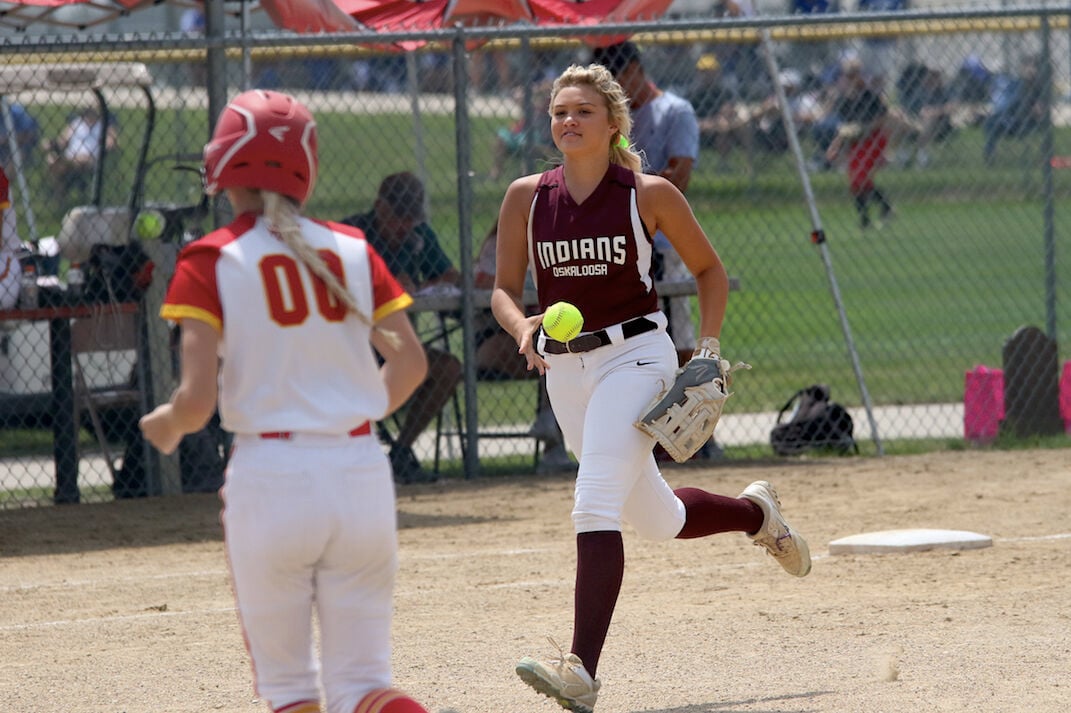 Oskaloosa's Maleah Walker gets ready to bat at state

Pella Christian's Emri Agre fouls one off at state

Pella Christian's Bailey Roose gets into a defensive position at state

Pella's Kiki Riggen throws out an Osky runner at first

OSKALOOSA — Eight area girls filled found themselves among those selected to the recently released Little Hawkeye all-conference softball teams with the season wrapping up last week.

Among those on first team were Oskaloosa’s Faith DeRonde, Maleah Walker and Olivia Gordon along with Pella Christian’s Natalie Harrill and Emri Agre.

DeRonde, a junior, had herself a big year for the Indians. She was selected as a first team pitcher where she finished with a 15-8 record with a 2.04 ERA (fifth in LHC) and 121 strikeouts (third in LHC) in 151 innings. At the plate, the leadoff hitter owned a .349 BA with six doubles, seven home runs (tied for third in LHC) and 16 RBIs.

Harrill, a junior, exploded onto the scene this year and proved to be one of the top players in the conference. She would slash .483 (third in LHC) while leading the team with 13 doubles (tied for second in LHC), seven home runs (tied for third in LHC) and 56 RBIs (led LHC) with a .771 slugging percentage (second in LHC). Her defense was also very strong at shortstop with 108 assists and a .957 fielding percentage.

Walker, a sophomore, put together a great season and had several big impacts on field. With the bat, Walker had a .410 batting average with eight doubles, two home runs and 18 RBIs. Her OBP of .470 was fifth best in the league and she converted that with her speed into 17 stolen bases and 50 runs scored (second in LHC). She was also special in center field where she covered a lot of ground with her speed and had six assists.

Agre, a sophomore, was another talented sophomore center fielder in the Little Hawkeye. Agre finished fifth in the conference with a .417 batting average to go along with 11 doubles, two home runs and 16 RBIs. She was equally impressive in the field where she didn’t commit an error all year long with 98 put outs and six assists.

Gordon, a junior, was a big run producer for Oskaloosa this season. She would own a .414 batting average with 12 doubles to go with one home run and a team-high 39 RBIs (fifth in LHC). The catcher also threw out four runners this year.

Roose, a senior, had a strong final season for the Eagles. The third baseman batted leadoff and owned a .325 batting average with 11 doubles, three home runs and 19 RBIs. Her 22 walks were third most in the conference and helped her sport a .438 OBP.

Riggen, a freshman, is Pella’s lone representative after putting together a solid season for the Lady Dutch. She would bat .299 on the year with seven doubles while leading the team in home runs (one) and RBIs (19). Riggen also saw time in the circle where she was 1-8 with a 5.10 ERA and 20 strikeouts in 60 1/3 innings.

Johnson, a senior, wrapped up her five-year varsity career with Oskaloosa. The left fielder sported a .292 batting average with two doubles and 13 RBIs. Her nine sacrifice bunts were second most in the conference with Osky having three in the top five.

Indianola ran away with the league title with a 19-1 record. Oskaloosa took fourth at 11-9 while Pella Christian finished seventh at 6-15 and Pella ended eighth at 3-17.

OF: Maleah Walker (SO, Oskaloosa)

OF: Emri Agre (SO, Pella Christian)

IF: Brynn Ortlund (SO, Indianola)

OF: Alley May (SR, Indianola)