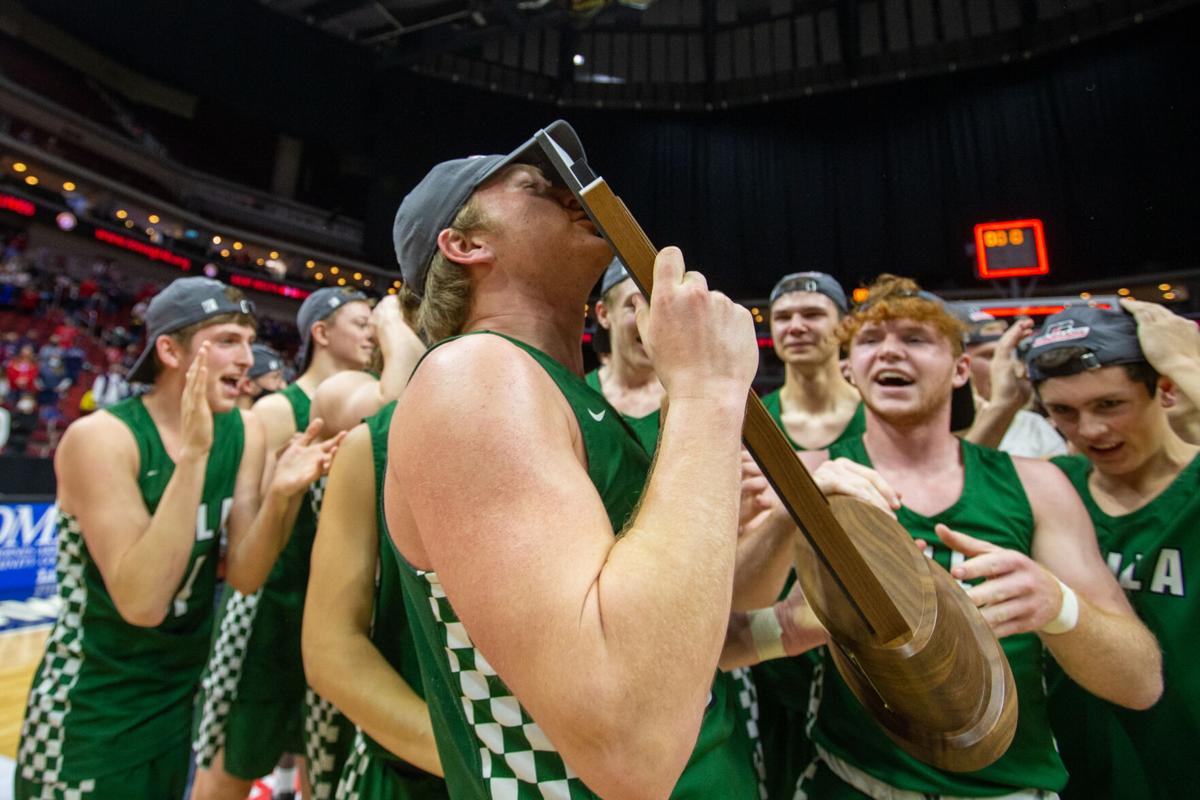 Pella's Grant Nelson kisses the trophy on Friday, after the Dutch defeated Ballard 68-59 in the Class 3A state championship game. 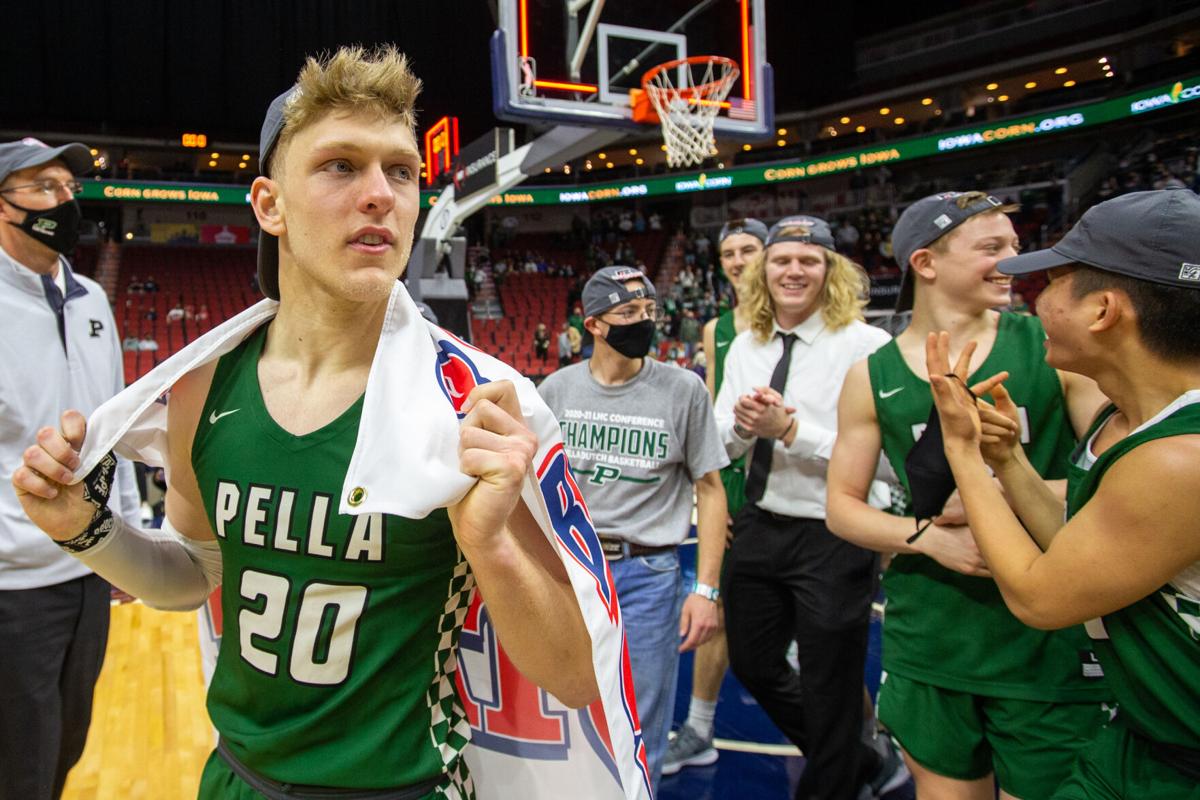 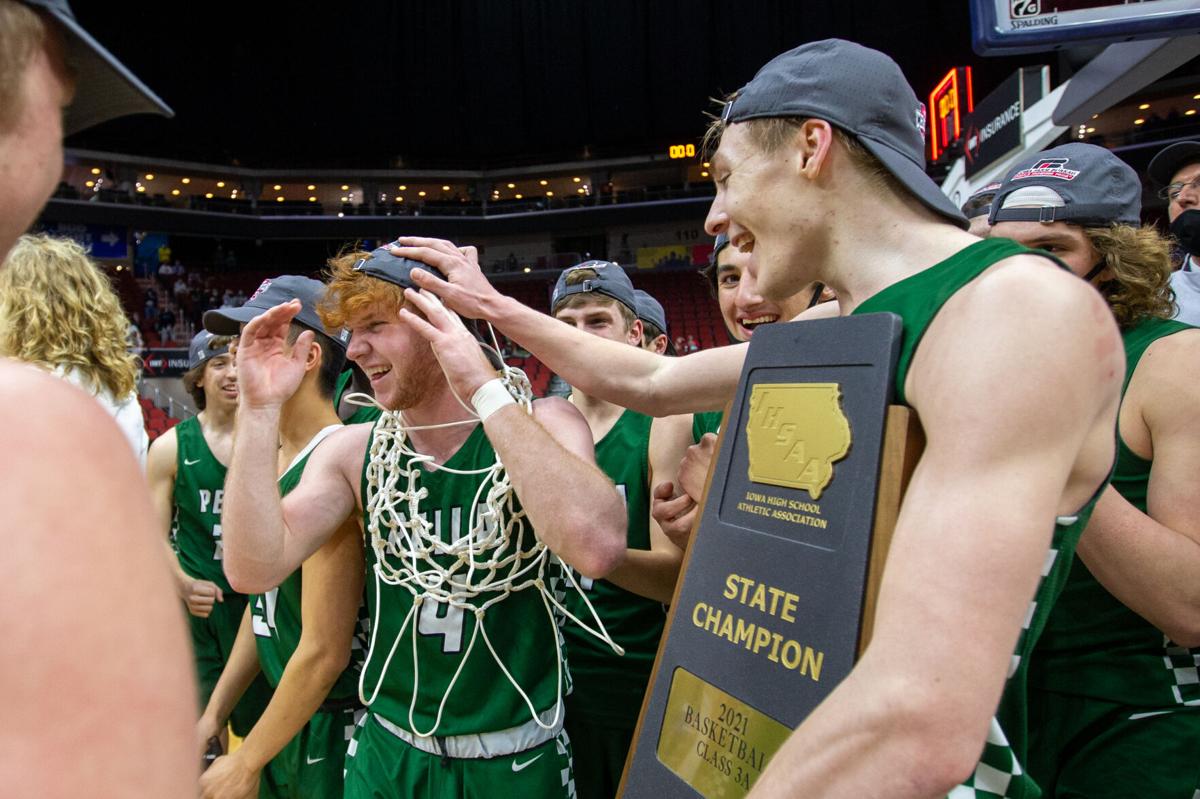 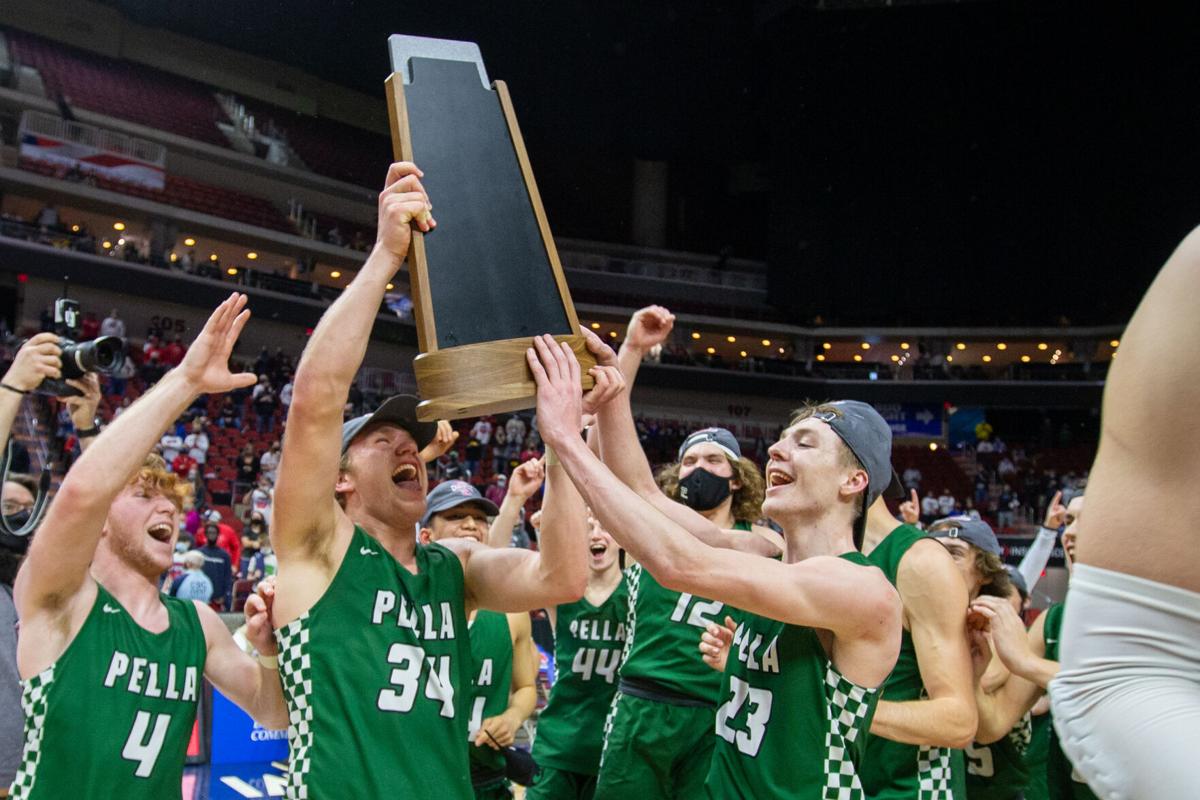 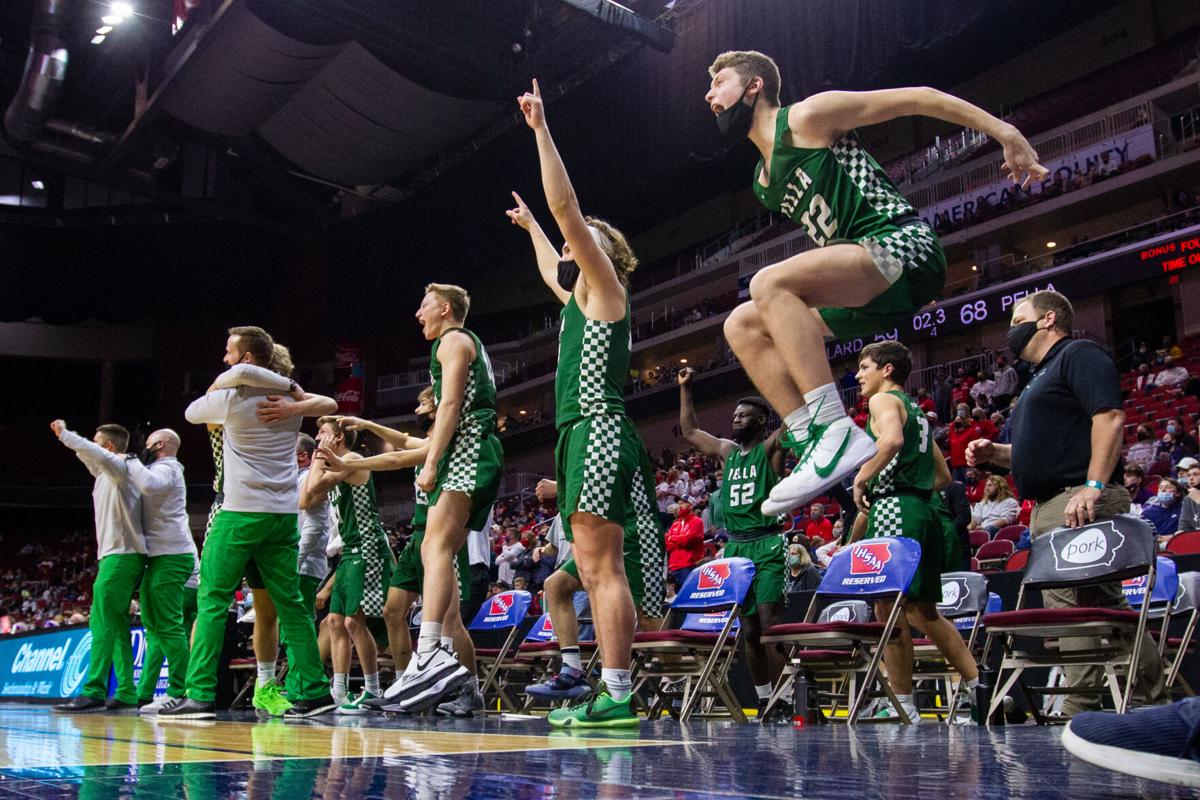 The Pella Dutch bench celebrates as Pella clinches the state title during Friday's game at Wells Fargo Arena in Des Moines against Ballard.

Pella's Grant Nelson kisses the trophy on Friday, after the Dutch defeated Ballard 68-59 in the Class 3A state championship game.

The Pella Dutch bench celebrates as Pella clinches the state title during Friday's game at Wells Fargo Arena in Des Moines against Ballard.

DES MOINES — The Dutch have another trophy coming back to tulip town. Friday night culminated a dream season and tournament run for Pella (25-2) as they knocked off top-seeded Ballard (25-2) 68-59 to win their first state title since 2003.

“It’s an indescribable feeling and I’m just so proud of the group of young men that we got in that locker room,” Pella head coach Derek Schulte said. “We'd say the same thing win or lose, they're a great group that can have a big impact just beyond the floor. But with all the work they've put in, the togetherness that we've played with all year long, it was a great way to finish and the seniors let us know it was just an indescribable feeling.”

Both sides used the early part of the first quarter to feel each other out. But after struggling in the first two games to shoot from three, Pella got three quick triples from Grant Nelson and Karl Miller in an even quarter with Dutch up 15-11 going to the second.

The back and forth matchup continued in a slugfest of a second quarter as the fouls and turnovers ramped up.

From there it was the duo of Nelson and Noah Allen doing the damage for the Dutch. Allen came off the bench and scored seven of his nine first half points in the second quarter while Nelson, who hit two triples in the first, took advantage of Ballard’s overplay and would capitalize on open back cuts for eight second quarter points and 14 overall in the half.

But it was the Bombers answering with three huge threes from Mason Murphy to keep it tight despite four players from Ballard picking up two fouls.

It was anybody's game with Pella leading 34-30 at the break.

Ballard’s Ashton Hermann, who was limited to just one point on 0-for-4 shooting in the first half, got it going for the Bombers going 4-for-4 with 10 points in the third and would finish with 17 points to lead the Bombers. Allen would counter for Pella with a tough left-handed layup and a three to give the Dutch a 49-45 advantage going to the fourth, a quarter Pella has dominated all season.

Two quick Dutch turnovers and a corner three from Ballard’s Jacob Ihle brought the Bombers within one early causing a quick timeout from Schulte a minute into the fourth. But it was Pella answering out of the timeout with a quick 5-0 run with a layup from Ryan Mace and a three from Miller to get the Dutch back in front 54-48 with 4:40 to go with different guys showing up for Pella at different times.

“That's what makes us different,” Schulte said. “It is different times, different guys step up to the plate. Grant had big moments tonight, Karl had big moments, Noah gave us great shot making ability and I thought our seniors Josh and Ryan just stepped up and made just a lot of gritty, tough plays for us.”

Ballard pulled within three with two minutes to go but it was once again Allen coming through in the clutch with a three and free layup after the press break to push the Pella lead to seven with just under a minute to go.

The Bombers would try to extend the game with fouls but Pella would make 4-of-6 from the line and come up with enough defensive stops for the clock to strike zero and the Dutchman to explode in celebration.

It was not long after the smiles and hugs that the trophy and the cut net was given to the Dutch for the third time in school history and first time since going back-to-back in 2002-03.

After playing in a couple of grinders in the first two games at state, Pella was able to play with more tempo and that showed with four Dutchmen finishing in double figures.

Allen was the game-high scorer as he came off the bench for Pella with 19 points, two rebounds and two assists on 7-of-11 shooting.

“It's crazy, I don't even know how to describe it,” Allen said. “Ever since I've been a part of this program, all we've talked about is winning a state championship. And here we are as a team, with these coaches and these players. It’s been a ride and I've loved every bit of it.”

Allen, who transferred to Pella from Newton this year, had to sit out the first eight games of the season due to transfer rules. But his senior teammates made sure to make him feel comfortable and let him know he was going to be a big part of the team.

“I love each and every one of them,” Noah said of Pella’s seniors. “They've all been so welcoming to me and that's really meant a lot more than they'll ever know. Between Ryan, Josh, Grant, Levi, Caleb I mean there's so many. They've all just been so welcoming, not only on the basketball team, but in school as well as in the community.”

“Everybody just made plays,” Nelson said. “We were just dribbling the ball really well around the court and everybody found the open guy and we finished the shots. Noah hit some big shots, Karl hit some big shots so it was a relief that our ball finally went in, we've kind of had some struggles shooting this week but it all paid off.”

Nelson left the hardwood at Wells Fargo arena with a title in hand and the net around his neck. A dream finish as he looks to head to Central in the fall to play football for the Dutch.

“It's crazy, I’ve talked to coach Schulte like this is how I want to go out,” Nelson said. “I see all these championships going on, this is a dream ending my senior year basketball season. I've been waiting for four years and beyond. I've been dreaming of this since a kid and you never thought it would really happen but, dreams came into reality today.”

For coach Schulte, he watched his former team Montezuma win their first state title since 1990 earlier in the day before guiding Pella as the dominance of the Little Hawkeye Conference continued as it was the third straight year a LHC team won the 3A state title (Oskaloosa in 2019, Norwalk in 2020).

“We try to celebrate each win but this celebration is different,” Schulte said. “You get to experience something in the locker room that few teams get to experience. I just feel blessed as a coach to be able to coach these guys.”

As the Dutch send out their seniors with the title, Pella returns three key juniors in Miller, Elder and Allen, who have their sights on returning to The Well to defend their title.

“That's what me, Karl and Parker talked about after we met as a team,” Allen said. “Hey, we still got next year, we still got one more year and so that's the plan for us. I mean, we'd love to make it back. It's been a heck of a ride.”

DES MOINES — Athletes are creatures of habits and superstitions. When something works on or off the court, they tend to repeat it in hopes of …