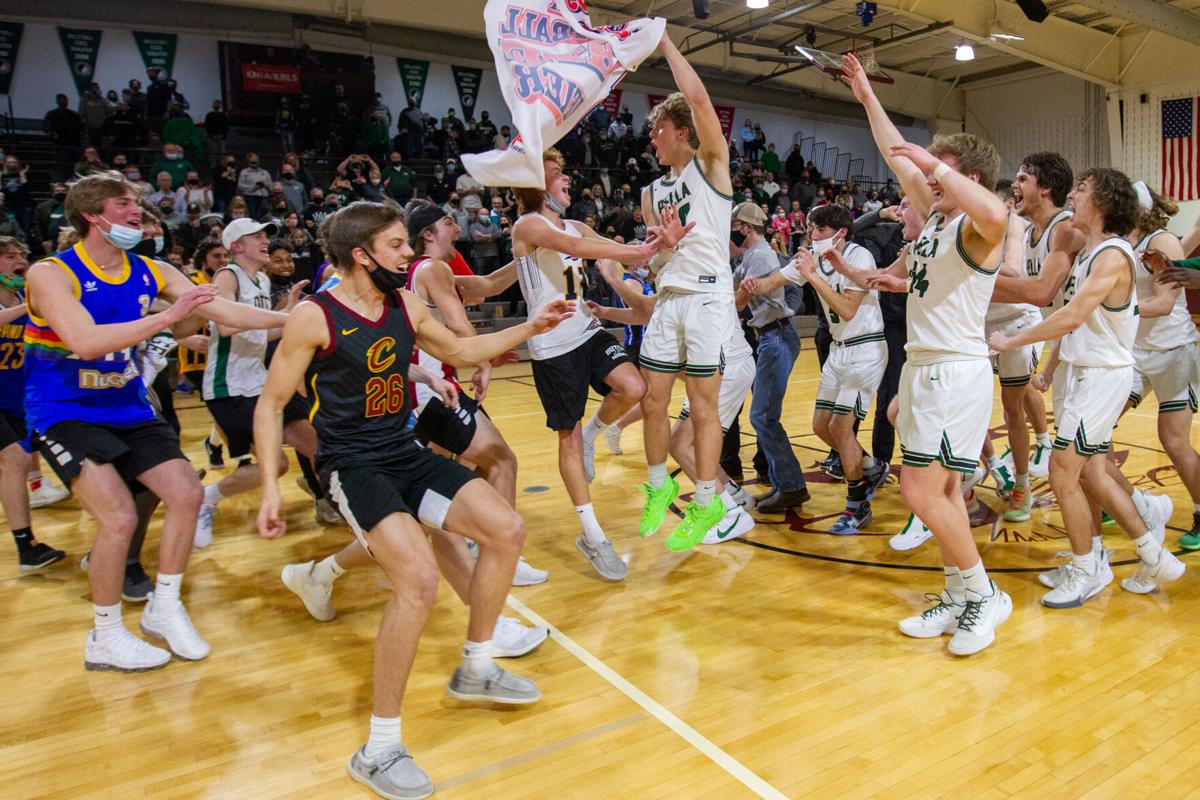 The Pella High School student section rushes the court to celebrate a state berth by the Pella Dutch. They won the substate title over Grinnell Monday, clinching a berth to the Iowa High School Athletic Association's state basketball tournament next week. 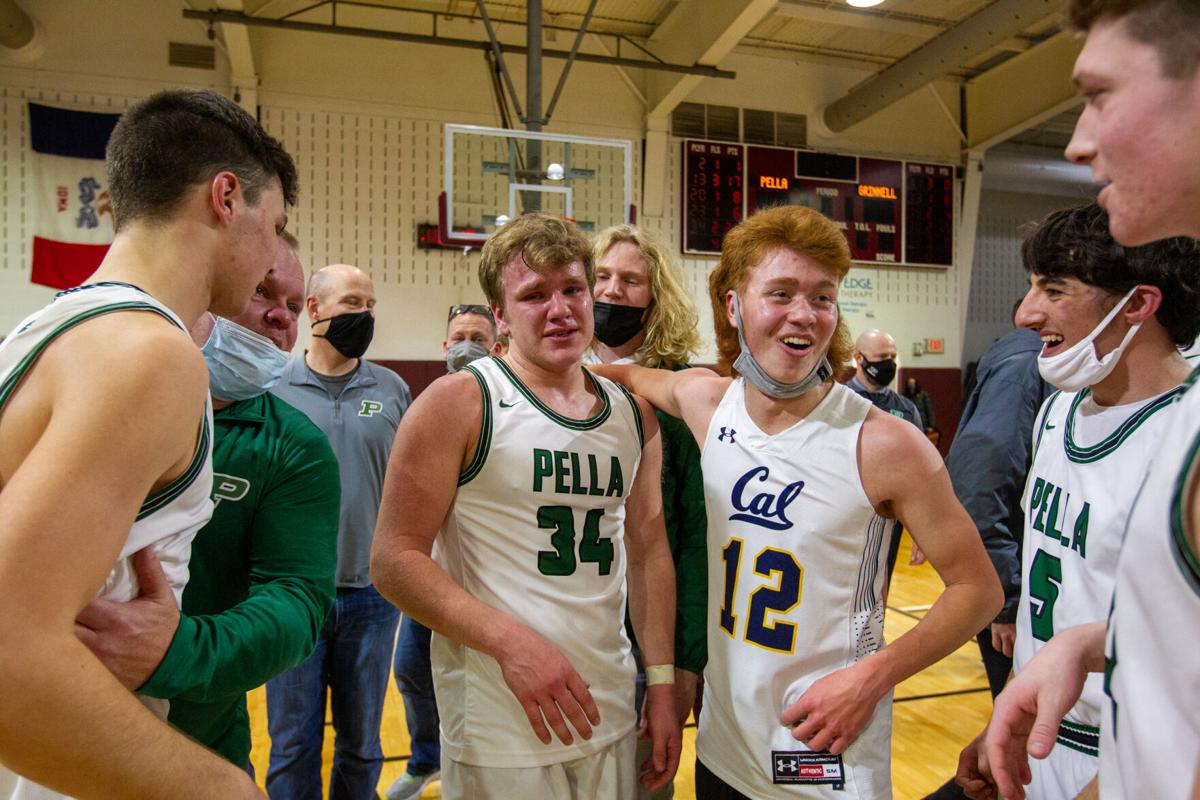 Pella's Grant Nelson (34) is greeted by members of the Pella High School student section after Monday's win over Grinnell. 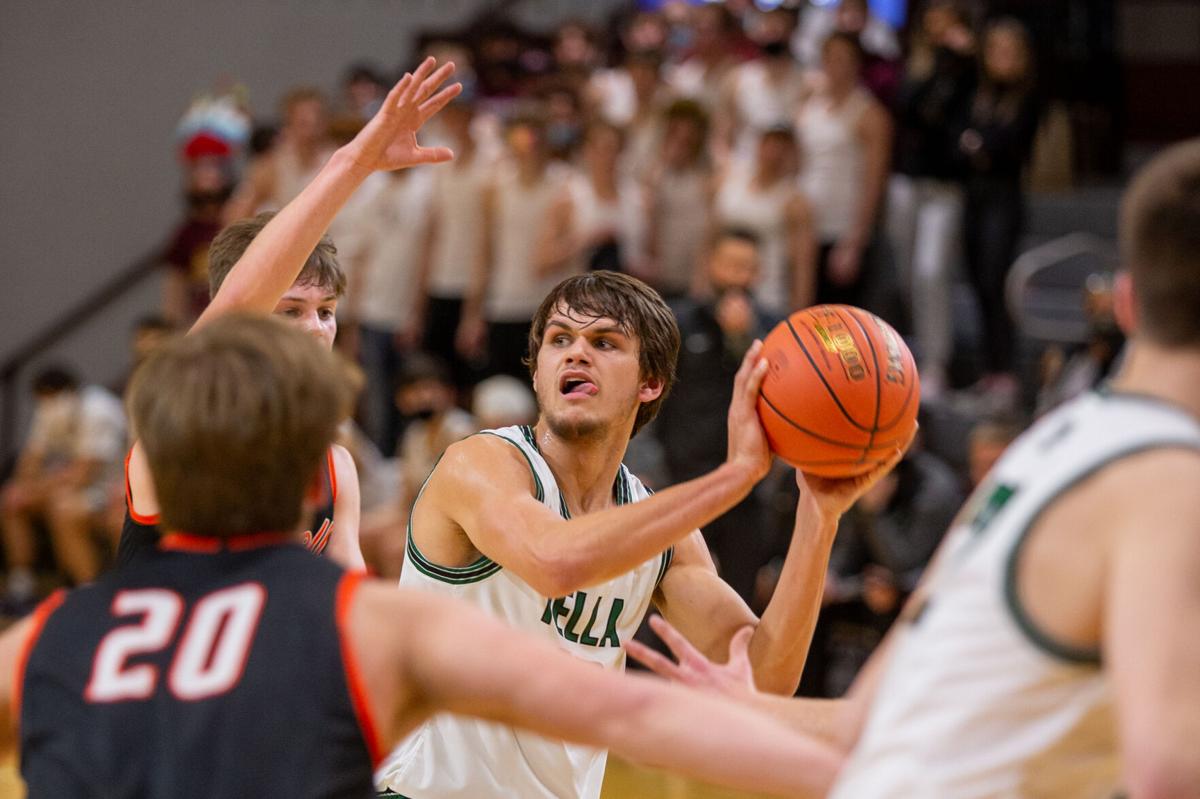 Pella's Karl Miller looks to make a play against Grinnell. 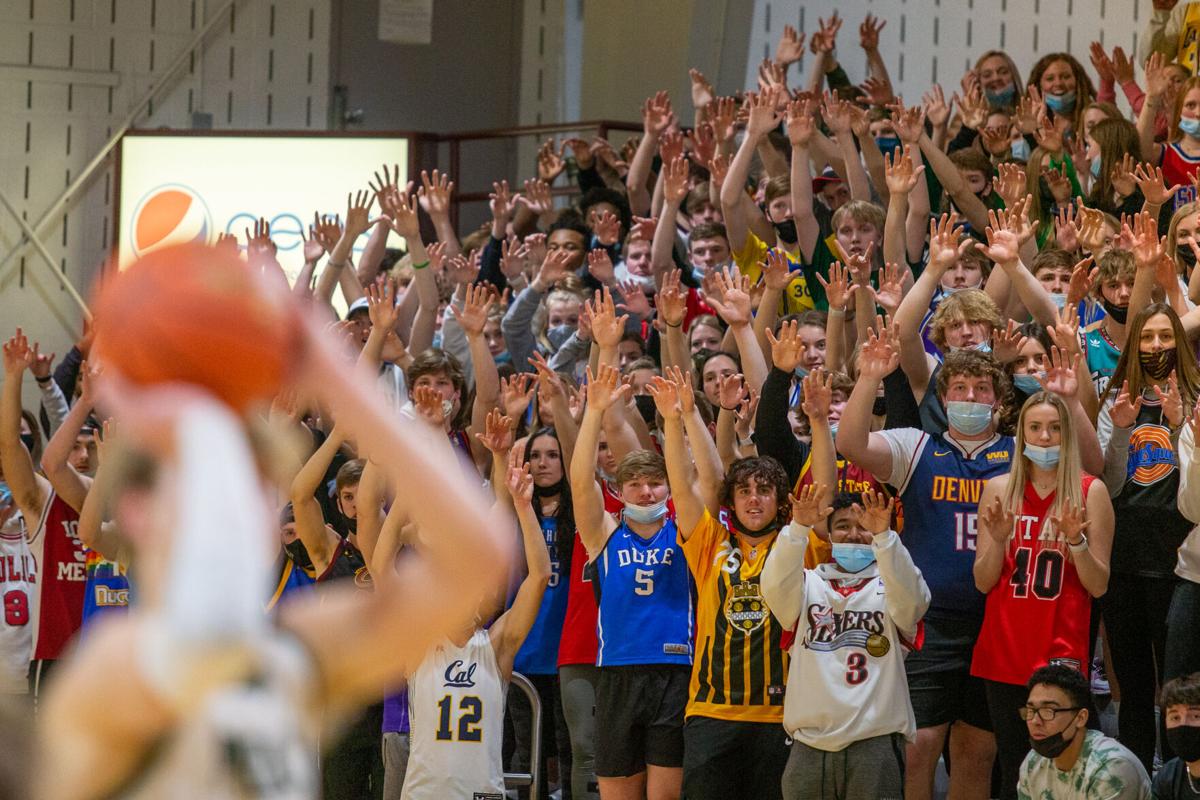 The Pella student section rocked their favorite jerseys for the big game.

The Pella High School student section rushes the court to celebrate a state berth by the Pella Dutch. They won the substate title over Grinnell Monday, clinching a berth to the Iowa High School Athletic Association's state basketball tournament next week.

Pella's Grant Nelson (34) is greeted by members of the Pella High School student section after Monday's win over Grinnell.

Pella's Karl Miller looks to make a play against Grinnell.

The Pella student section rocked their favorite jerseys for the big game.

OSKALOOSA — The boys from tulip town are heading back to Des Moines. Pella secured their spot in next week’s State Basketball Tournament after grinding out a 63-52 win over a pesky Grinnell squad on Monday night.

These two Little Hawkeye Conference foes went back and forth exchanging runs and momentum.

Grinnell took the first punch with an 8-0 run in the first four minutes of play. The Tigers slowed the pace, getting threes from Brooks Latimer and AJ Wilkins and a tip in from Owen Coffman. Meanwhile the Dutch were not able to get out and run and were battling some jitters with a couple early turnovers.

Pella was able to bounce back with a run of their on with a flurry of threes late before Cole McGriff’s late layup put the Tigers up 15-14 after one quarter of play.

“Give Grinnell a lot of credit,” Pella head coach Derek Schulte said. “They battled, they came out and had a great run and that set the tone for the game. Our ability to respond and go on an 11-0 run I thought was important for us to get back in the flow of the game. We looked out of sorts early. Once we got back into that rhythm, it really just became a back and forth battle.”

It was more of the same in the second quarter with both sides giving and taking. More the most part Grinnell was able to control the pace and limit Pella’s transition opportunities as the Dutch found themselves behind by one going into the break.

The fourth started with the two teams deadlocked at 37 with eight minutes to decide who goes to Wells Fargo Arena. Coach Schulte had one last message before sending his team out for the fourth.

“Stay in the moment, stay poised and stay together,” Schulte said. “We talked about it before that we’ve had a great run and have been able to run away from teams. Not all games are like that, we knew coming in we had to have the toughness and grit to win a grinder.”

The Dutch and Tigers matched shots for most of the quarter as Miller knocked down a couple of mid-range jumpers with Grinnell countering with six points inside from Coffman, a 6-foot-8 forward who missed the first two meetings and gave Pella some trouble with his length with 19 points.

Pella held a one-point lead with under two minutes to go when Nelson exercised some demons against the Tigers.

Nelson, who saw his high school football career end to Grinnell in the playoffs as well as shooting 6-for-21 (28.6%) from the field and 2-for-11 (18.2%) from deep in two games against the Tigers this season, ultimately got some revenge as he would confidently splash a huge three to put Pella up 52-48 with 1:25 left.

The Dutch came up with several key stops defensively as a lively crowd that featured students from Pella, Grinnell and a humorous Pella Christian bunch playing chaotic neutral hoping for the tie started to come alive.

Grinnell would have to play the foul game for the rest of the game and Pella stepped up to the challenge, going 11-of-12 from the charity stripe down the stretch to help the Dutch punch their ticket to state.

Students and parents rushed the floor as the clock struck zero and elation was on the faces of everyone wearing green in the gym.

Nelson finished with a game-high 21 points on 7-of-13 shooting with two rebounds, three assists, a steal and a block while Karl Miller added 17 points and five rebounds for the Dutch. Josh Warner would do a little bit of everything with eight points, eight rebounds, four assists and four steals.

“Their size presents a challenge but I thought their guards made shots. Karl made some big plays in the second half, Grant mades some big plays and then the difference is you have a few stops and we hit free throws down the stretch. It wasn’t pretty, it wasn’t the way we wanted it but we’re not going to apologize for going to the state tournament.”

Pella earns a state bid for a second straight year and 18th in school history. Coach Schulte was emotional when talking about what this means for the Pella basketball program is at right now.

“Our guys are awesome…this is a fun group,” Schulte said.

The Dutch are eager to get back to state where they were bounced in the quarterfinals with a 58-43 loss to eventual state runner-up Sergeant Bluff-Luton. The boys in green hope for a longer run this year.

“We’re excited, last year we didn’t perform very well,” Schulte said. “We’re looking forward to the opportunity. Going back-to-back, that’s hard. We took a step forward this year and now we want to get up there and compete. We’ll celebrate this one today and tomorrow and then we’ll get back to work.”