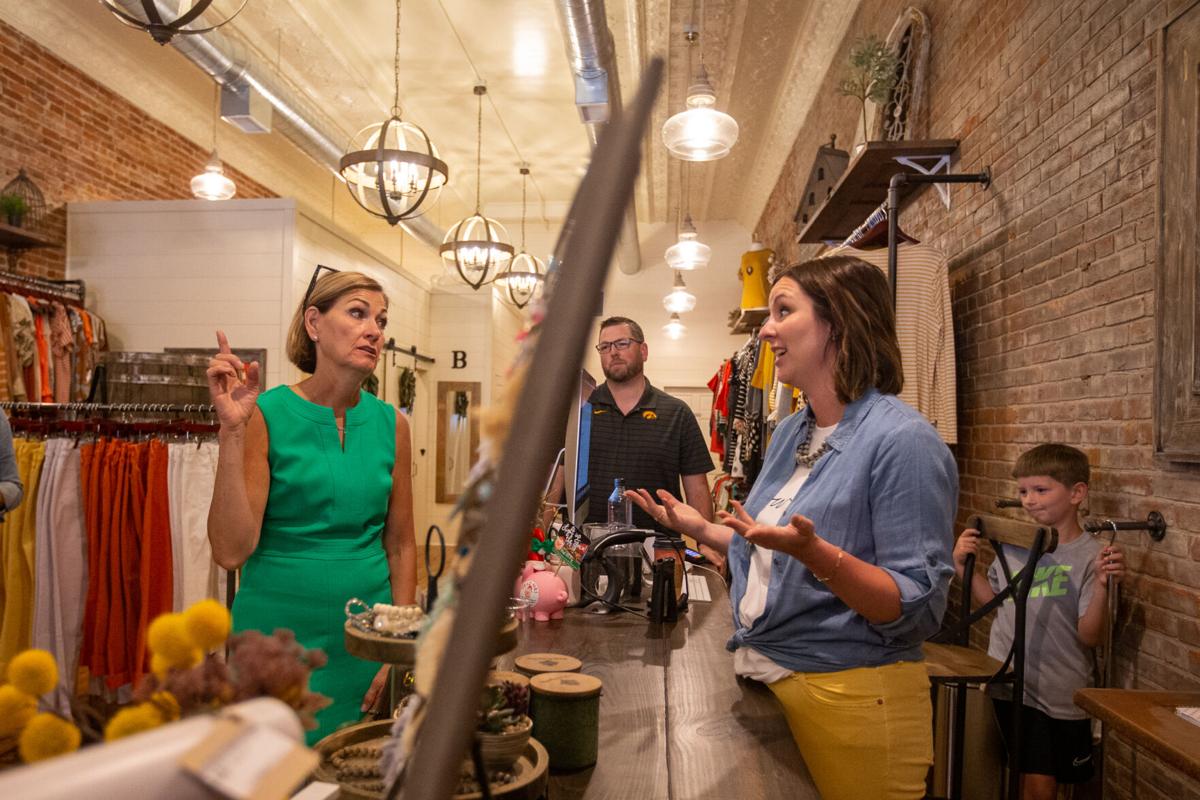 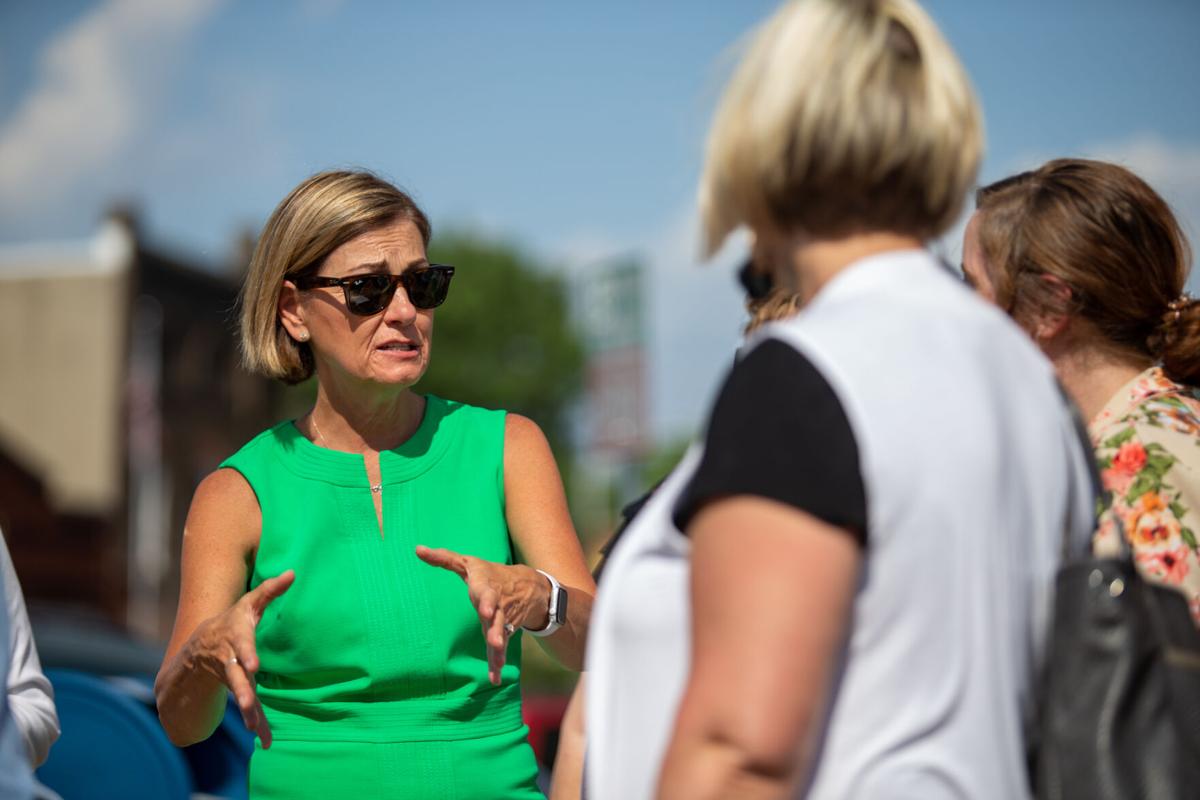 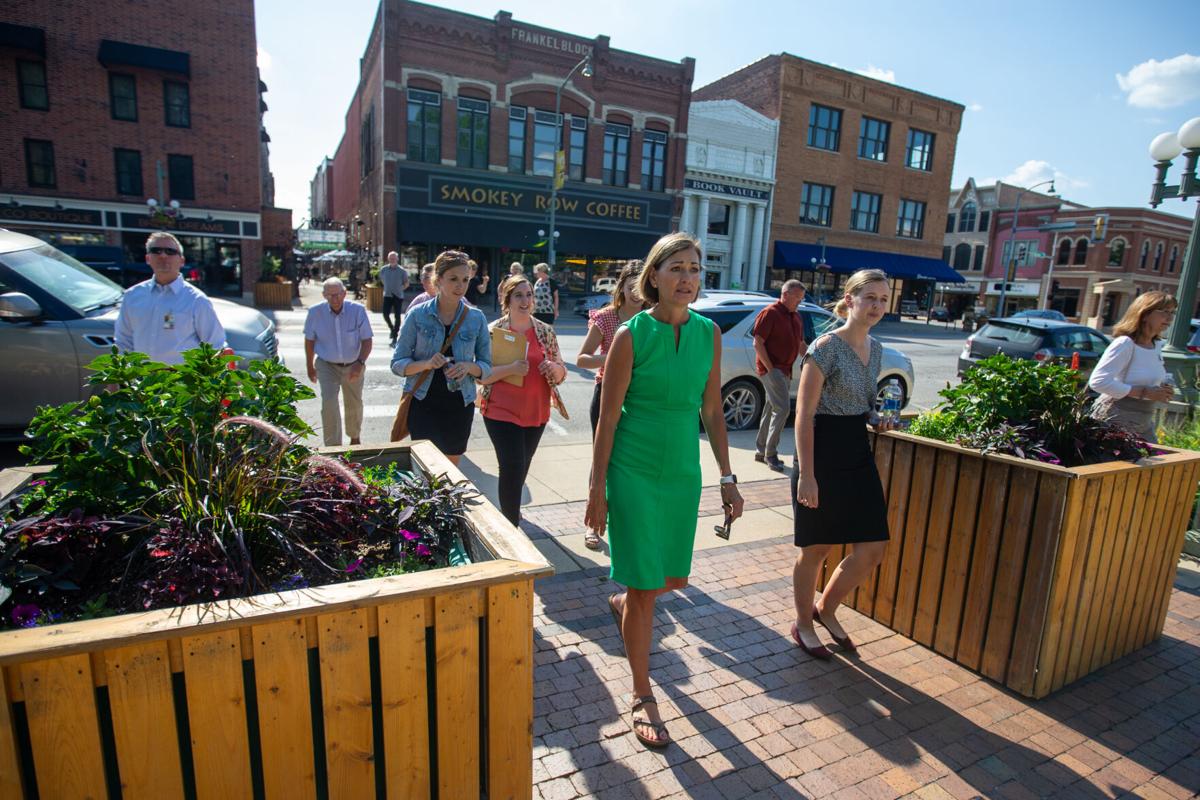 OSKALOOSA — Gov. Kim Reynolds said Thursday that it's time for Iowa to start placemaking, and said Oskaloosa is ahead of the curve.

"If you're already doing some of that, you're ahead of the game on that," she told leaders of the community and Oskaloosa's Main Street district.

She also outlined her office is working to begin a national marketing campaign, similar to those undertaken by South Dakota and Alaska.

"I'm tired of watching South Dakota do it — and now Alaska is kicking in," Reynolds joked, adding she's modeling Iowa's spending budget off of those two states.

"We're going to do that too. Because we are the real deal, and we have so much to offer in this state," Reynolds said. "And we need to retain, but we also need to recruit."

During a Thursday afternoon visit, Reynolds met with community leaders briefly at MidWestOne Bank before touring some square treasures, including the Book Vault, Betsy's Boutique Shop and The Alley.

Leaders touted the region's worldwide focus — including Musco and Clow in Oskaloosa, Vermeer in Pella, Cargill in Eddyville, and John Deere in Ottumwa.

"We have a lot of global business going around on here," said Tom Rielly, an Oskaloosa man who is a governor's appointee to the Iowa Department of Transportation commissioners. "That ... reinforced why the Northwest Bypass is so vital, the regional airport is so vital, and, soon, will be a Southeast Connector."

"It's not easy to maintain the designation," Reynolds noted. "It's hard to get it, but then you have to maintain it."

Leaders of Oskaloosa Main Street and business owners along the way thanked Reynolds for her pandemic approach which allowed them to survive.

Before her visit to Oskaloosa, Reynolds made earlier in the day when she alleged that federal officials waited nearly a month before they acknowledged the federal government was flying refugee children into Iowa and then transporting them out.

The acknowledgment, made to Sen. Chuck Grassley's office, came after multiple denials to state officials by the government. Reynolds is calling for the U.S. Congress to investigate, saying state officials first thought the flights may have been related to human trafficking.

"We weren't able to get any answers about why a charter plane was coming in in the middle of the night, and unaccompanied minors removed from the plane and transported outside of the state," Reynolds told media Thursday. "Our concern was not only are they coming into this state, but we were afraid that human trafficking was taking place. And we weren't getting any answers."

The incident took place on April 22, and state officials said they become aware of it on May 2. Federal agencies denied their involvement to the state on May 7, 10 and 11, and denied involvement to Grassley on May 14.

Ultimately, the Health and Human Services’ Office of Intergovernmental Affairs and Office of Refugee Resettlement confirmed to Grassley on May 21 that the flight was one of their flights.