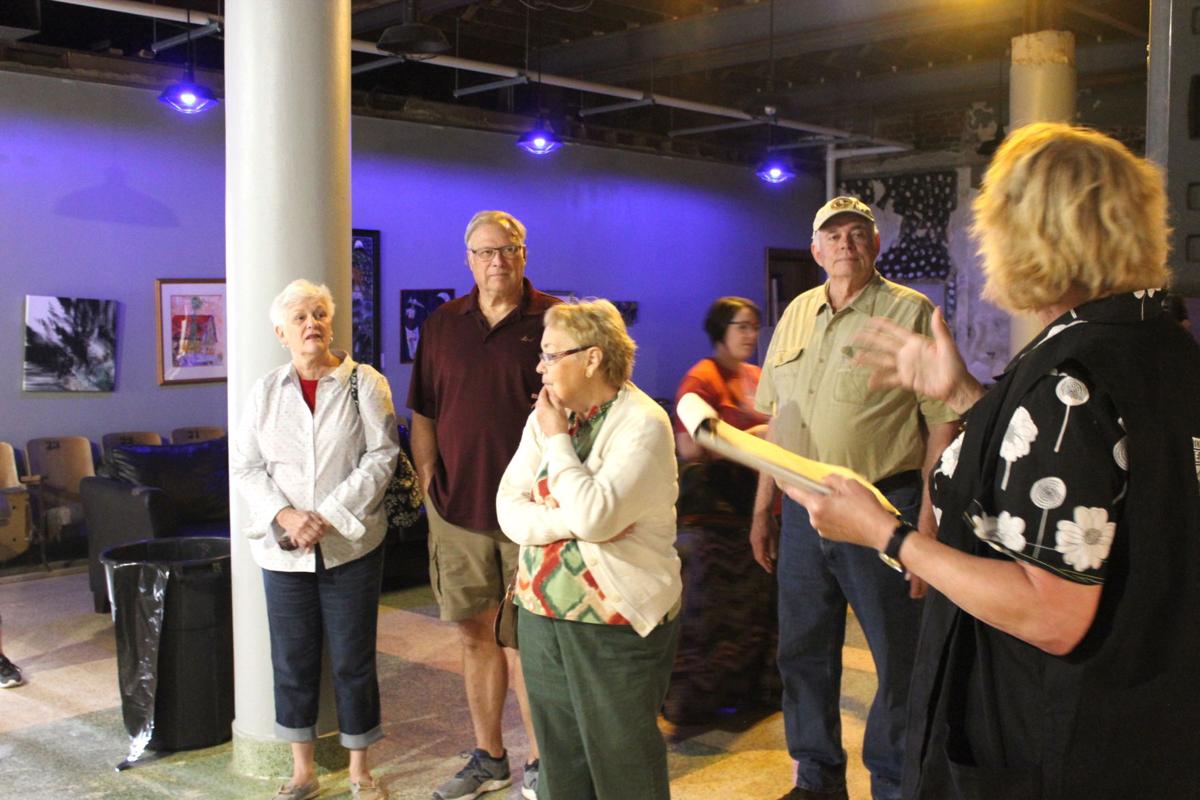 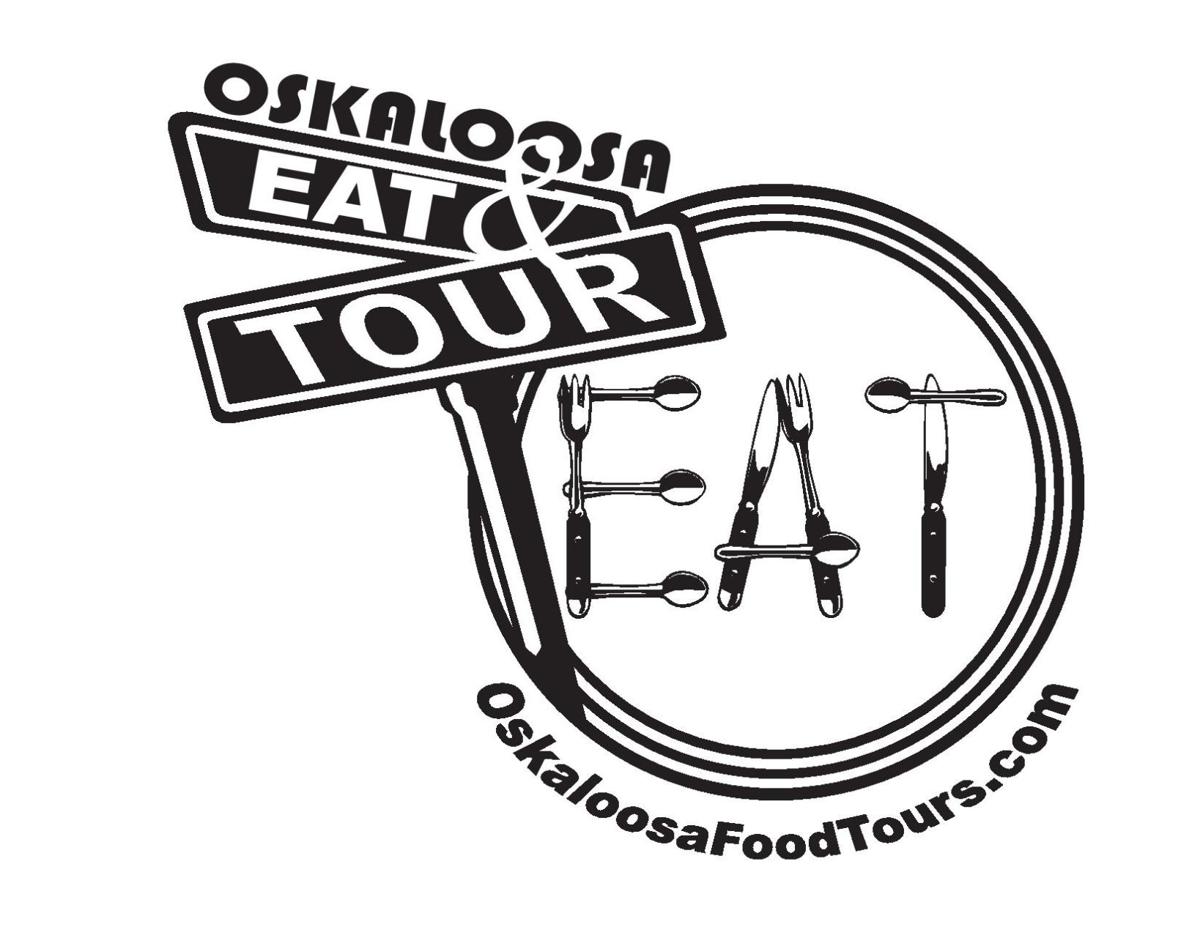 OSKALOOSA — If you’re looking for something new and interesting to do in Oskaloosa, Cheryl Benson can offer you some food for thought.

Benson has launched a brand new food tour here in Oskaloosa, which combines food with history, architecture and culture to create a unique, fun experience for Oskaloosa citizens and visitors to enjoy. Think of it as a guided, progressive meal on foot that showcases the city.

Benson took a group of nine enthusiastic people on a tour this past Friday, which started at the Chief Mahaska statue in the City Square Park.

The first food stop was the Oskaloosa Art Center and Studios, where manager Sarah Kargol was hosting a brief tour and food sampling from the Wood Iron Grille. The Wood Iron Grille is affectionately called WIG by the locals. Since the restaurant itself is too far away for the walking tour, the food samples were brought to the art center and served up by WIG’s general manager Krystal Lanphier.

WIG is owned and operated by Matt Gunn and Michael Glesener. Michael, the chef, grew up just ten miles away in New Sharon and has lived in Oskaloosa since 2009. Matt has lived in Osky since 2000 and graduated from OHS. They both love to be the place where people come to connect, from meeting with family to celebrate a birthday or anniversary, to being a date night destination, or just hanging out with friends “making memories one plate at a time.”

About 20 years ago Frank and Shirley Hunter added a café to Shirley’s gift shop as a place for customers to come and relax while shopping, and it is now called Hunter’s Gift and Coffee Cafe. This was the second stop on the food tour.

Frank and Shirley offer a small, quality menu with all homemade dishes. They purchase organic when possible, and are focused on healthy, delicious food. Two of their best-sellers are the chicken-chestnut casserole, which the tour group sampled, and their chicken salad. They also have popular homemade soups.

Shirley said she does this because she enjoys serving people, and she likes how food makes people happy. She also says the hardest part is trying to figure out how much food to make each day.

The next food stop was after a short walk across the square to the Book Vault, where manager April Gorski was waiting to invite the group in to sample some sweet potato curry soup from Grate Expectations, which is also a bit too far away for a walk.

Grate Expectations is located at 1109 A Avenue West (Hwy. 92 West). Owners Kyle Brown and Errin Keltner purchase local foods when possible and are extremely picky about quality. Their goal from the outset was to offer southeast Iowa a fresh and unique dining experience focused on providing thoughtful food.

Book Vault was opened in December 2005 when the intent was to develop a premier independent bookstore in the wonderful historic space. The white-columned bank building has been on the Oskaloosa square since 1892, and has been a number of different businesses in its over 125 years of use.

With over 2400 square feet of retail space, Book Vault employs a staff of seven, all of whom love books and are dedicated to continuing the Book Vault well into the future for others to enjoy.

After another short walk across the square with brief stops at the north side storefronts and the courthouse, the tour wound around 2nd Street past the police department and over to 1st Avenue East to The Brickhouse Cafe for the next food sampling stop.

The Brickhouse Cafe opened up in November 2017, and Owner Kory Wright said, “the time sure has flown by when you’re having this much fun.”

The tour group was invited to sample their top-seller, the parmesan pot roast melt. The Brickhouse is open for both breakfast and lunch and also offers a full coffee shop experience all day.

The walking tour resumed and brought the group past the Oskaloosa Fire Department, City Hall, Public Library and Shoemake-Muhl House on the way to the Penn Central Mall, where WanderLunch was the next food stop.

WanderLunch restaurant was started by Heather Nelson in 2019. Her vision for both the food truck and restaurant was to have a small, carefully developed menu. That also leaves room for some creativity, and outside of their weekly specials, their grilled cheese is also a big crowd-pleaser.

The food truck was a good introduction into her business, but Heather says she really likes her new brick-and-mortar store because it allows her to see everything that is going on and interact with customers and passers-by. WanderLunch prides itself on being family-oriented and family-friendly.

The tour group was treated to a delicious sample of miso mushroom soup, one of their weekly specials, and sat down to enjoy it in front of The Montage exhibit which was built in 1985 by local artists Tom Stone and Marv Smith.

Another short walk past the skate park and back up High Avenue past Taso’s Steakhouse and Pizza Ranch brought the group to their final stopoff at Smokey Row Coffee House.

The Smokey Row location in Oskaloosa opened in 2004. Other locations opened in Pella in 2001 and Des Moines in 2009. They are opening a fifth location in Ankeny this year. Smokey Row’s mission is to make peoples’ day in the communities they are in. Manager Neisha Van Gorp says they really love being people’s home away from home. Not only are they a coffeehouse but they are also a soda fountain with a diner-type menu.

The tour group was able to sample the house coffee, their best seller, along with some of their delicious pastries. Many of the tour participants around the table were overheard complimenting their guide on a very enjoyable event.

Cheryl Benson wrapped up the tour by thanking those who participated and asking them to complete a brief survey about their tour experience.

“It was great to finally get out and take a test run through the tour and see how it all comes together. I’m anxious to read through the evaluations and see the feedback,” said Benson, “because I’ve walked it myself several times, but it’s not the same timing as walking it with the full tour group.”

The first public food tour is scheduled for September 27 from 11 a.m. to 2p.m. For a discount use OSKCITIZEN or NEWCUSTOMER.{/span}

More information can be found at www.facebook.com/OskyFoodTours/

Staff writer Richard Rindt can be reached at rrindt@oskyherald.com