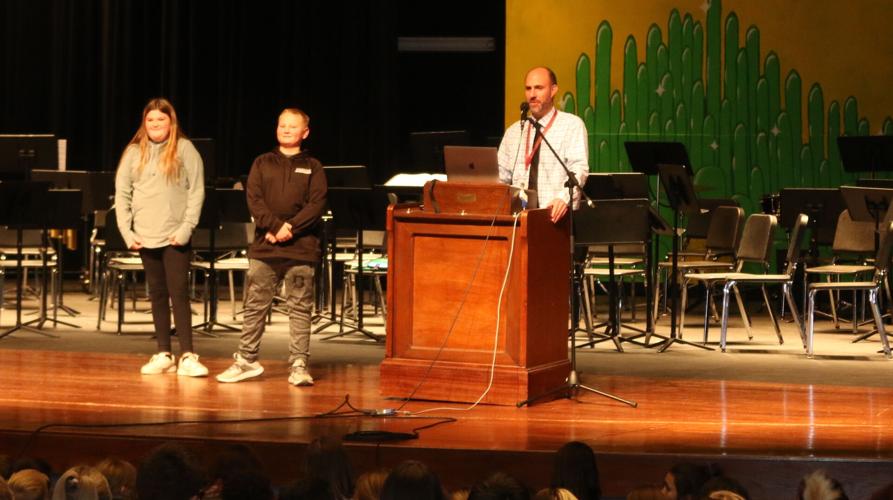 Colton Hunt (center) and Blair Rossi (left) were each awarded a "Student of the Trimester" award for exemplifying safe, responsible, caring and respectful behavior. 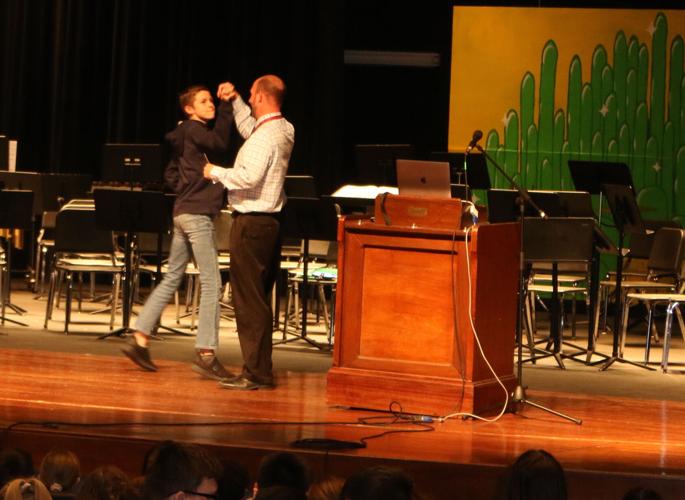 Colton Hunt (center) and Blair Rossi (left) were each awarded a "Student of the Trimester" award for exemplifying safe, responsible, caring and respectful behavior.

OSKALOOSA — The first trimester of the 2022-23 school year ended with a bang at Oskaloosa Middle School’s End of the First Trimester Awards Assembly.

The award ceremony took place at the George Daily Community Auditorium on Tuesday, Nov. 22. Students and staff members alike were honored by the school and by local organizations for their various achievements so far this fall.

Two individuals from OMS received especially prestigious awards. OMS physical education teacher, Betsy Luck, was presented with a challenge coin award after she helped save the life of a wrestling official who suffered a heart attack at a recent home wrestling meet.

“Sometimes heroes come in the shape of adults,” said OMS principal Mark Scholes. “Each and every day they do ordinary things over and over again, and that’s very heroic. [Luck] did something that I believe went above and beyond about a week and a half ago. [She] saved the life of a wrestling official who had gone down at Friday’s meet. She was able to administer CPR to the individual and also located and helped…did the AED [defibrillator] on the individual, henceforth saving his life.”

OMS student Lily Woods was presented with an award by Kimberly Dixon, of the American Legion Auxiliary. Dixon presented Woods with the auxiliary’s “Youth Hero Award” after Woods spotted a fire in Oskaloosa and made a 911 call, alerting the Oskaloosa Fire Department, who successfully put it out.

OMS students received updates on their school’s cross country, volleyball, football, basketball and wrestling teams at the ceremony. The coaches recognized their student athletes for their achievements so far.

“I want to thank the players,” said Bart Elliot, OMS’s seventh grade football coach. “It’s a great group to work with. You guys were very coachable. I’m excited to see what you do in the future.”

Elliot’s positive report of his team was echoed by the other coaches in their reports of their own teams.

“You winners have exemplified…gone well above and beyond our PBIS expectations. You’re good people, and that’s what it’s about at the end of the day,” said Scholes.

Colton Hunt and Blair Rossi were both given the award this trimester. Both Hunt and Rossi received coupons from local businesses in Oskaloosa. In addition, they will also have their names displayed as “students of the trimester” on a plaque in the OMS building.

Rounding out the group of honorees was Korbin LaRue, who received Scholes’ “High Five” award for giving the best high five at the start of the day. LaRue and Scholes demonstrated what a champion high five looks like on stage at the auditorium for the watching crowd.

With the first trimester’s awards handed out, Oskaloosa Middle School is approaching the end of the calendar year 2022 on a high note.