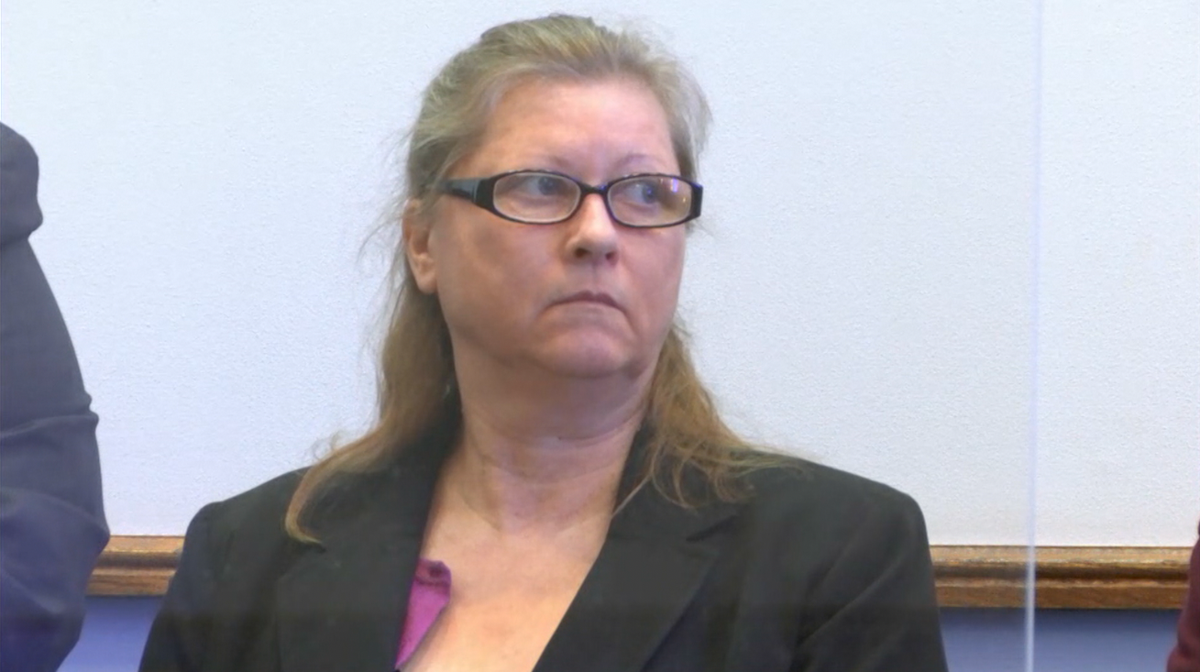 In this photo from video, defendant Michelle Boat listens as Judge Patrick Greenwood, not pictured, reads the jury's verdict finding her guilty of first-degree murder. 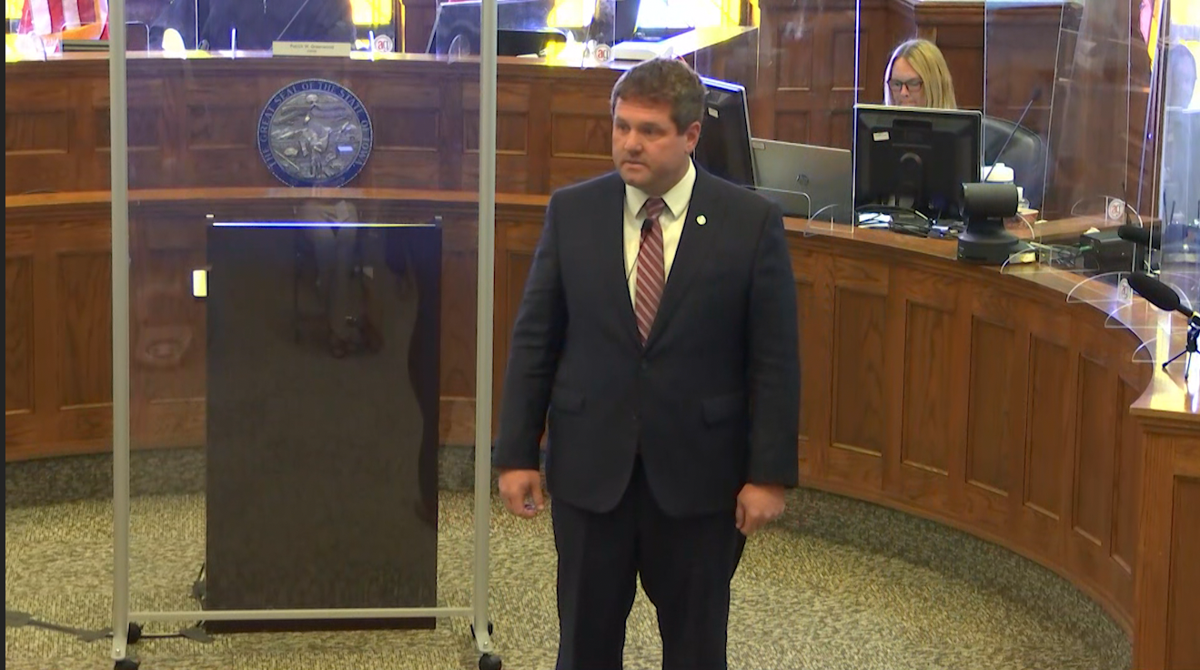 In this photo from video, assistant prosecutor Jared Harmon delivers the state's rebuttal statement on Tuesday in the first-degree murder trial of Michelle Boat. Not long after, a jury returned a guilty verdict. 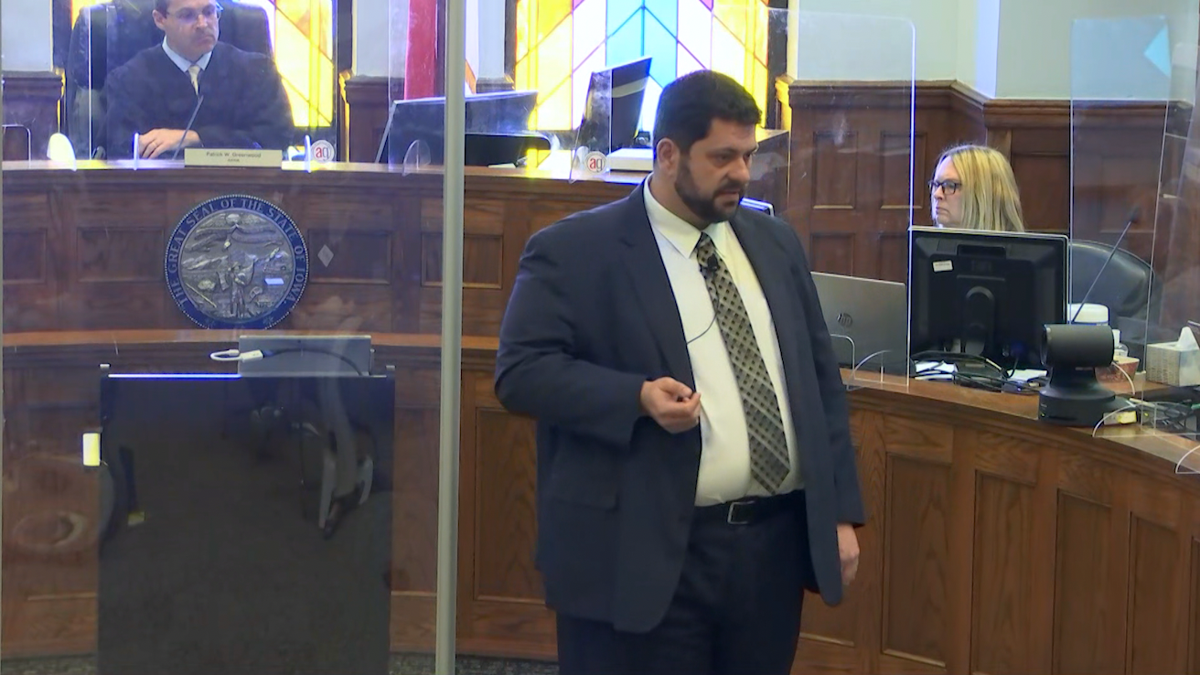 In this photo from video, defense attorney Trevor Andersen delivers a closing statement to the jury on Tuesday in the first-degree murder trial against his client Michelle Boat.

In this photo from video, defendant Michelle Boat listens as Judge Patrick Greenwood, not pictured, reads the jury's verdict finding her guilty of first-degree murder.

In this photo from video, assistant prosecutor Jared Harmon delivers the state's rebuttal statement on Tuesday in the first-degree murder trial of Michelle Boat. Not long after, a jury returned a guilty verdict.

In this photo from video, defense attorney Trevor Andersen delivers a closing statement to the jury on Tuesday in the first-degree murder trial against his client Michelle Boat.

KNOXVILLE — It took less than one hour for a jury to find Michelle Boat guilty of murdering her estranged husband's girlfriend.

After hearing three days of testimony and a half-day of closing arguments, a jury of six men and six women returned a unanimous verdict finding Michelle Boat guilty of first-degree murder in the May 18, 2020, slaying of Tracy Mondabough, an Ottumwa woman who was the girlfriend of Michelle Boat's estranged husband.

Through most of the trial, Michelle Boat could be seen on cameras showing emotion and wiping tears. She testified through tears most of the day Monday. But as Judge Patrick Greenwood read the jury's verdict Tuesday, she appeared stoic with her eyes straight forward.

The conviction carries a mandatory sentence of life in prison without the possibility of parole. She will be sentenced on July 1. Until she is sentenced, she will be in the custody of the Marion County Sheriff's Office.

Michelle Boat's attorneys had attempted to argue that the killing of Mondabough was in the heat of passion, asking the jury to find her guilty of a lesser-included charge of voluntary manslaughter. If successful, it would have dropped a life sentence to a maximum of 10 years.

Prosecutors instead put on a concise case detailing forensic evidence tying Michelle Boat to the scene, and establishing a motive for the killing as one of scorn after her husband moved out abruptly, after 20 years of marriage, for another woman.

In a to-the-point rebuttal, Jared Harmon parted from the jury with simplicity: "Michelle Boat didn't act because of some sudden, irresistible provocation. She was the provocation."

Harmon, an assistant Marion County prosecutor, rebutted the defense's claim that the proper verdict was not first-degree murder, but rather a voluntary manslaughter. The latter is an unlawful killing not from a premeditated intent, but one in the heat of passion.

On the stand herself, Michelle Boat testified Monday that she was responsible for Mondabough's death. Defense attorneys for her had argued in opening statements, and again on Tuesday in their closing, that the fatal stabbing of Mondabough was not premeditated.

"We're asking for you to find Michelle guilty of voluntary manslaughter," Boat's attorney Trevor Andersen said to the jury Tuesday. "We believe the evidence has shown, and the lack of other evidence, that this it the charge that most fits the facts."

He added that he wasn't asking for the jury to feel sympathy for his client.

"I don't want you to sympathize with Mrs. Boat," Andersen said. "I don't want you to give her mercy. She doesn't deserve it. She killed someone seatbelted in her truck, with no weapon — killed her and left her for dead, drove off. That is not asking for sympathy when I ask you to consider: why."

Andersen argued the jury should consider the sudden breakup Michelle Boat faced when her husband of 20 years left her. He argued they should also consider the uncertainty of the pandemic, Michelle Boat's loneliness, and her testimony that she was down to her last $6 and out of work on May 18, 2020. As Michelle Boat followed Mondabough that day, at Vermeer she saw her estranged husband Nicholas Boat kiss Mondabough twice.

When Michelle Boat ultimately approached Mondabough's truck at 101 Glenwood in Pella, Michelle Boat testified that Mondabough began hitting at her and calling her a "crazy bitch."

"Under the circumstances that the hitting and the words caused this," Andersen said. "I'm not judging what Tracy did."

Andersen also argued that the killing occurred in daylight, and that the evidence wasn't entirely scrubbed or destroyed, showed Michelle Boat did not plan the killing. The state said the evidence pointed in a different direction.

"This was the result of planning, plotting and premeditation. Michelle Boat warned Tracy," Harmon said, pointing to texts sent to Mondabough weeks before the killing. "On May 18, Michelle Boat had already assembled all the tools that she needed for murder: she had the knife, she had the gloves, she had the binoculars, all with her, just waiting for one final ingredient — and that was opportunity."

Harmon also argued that Mondabough still having her seatbelt on showed she didn't have a chance to defend herself, suggesting that Michelle Boat brought the knife with her and did not retrieve it from her car during the altercation.

The trial of Michelle Boat began after jury selection on Thursday. The state called a dozen witnesses to the state, wrapping up its case in about five hours of testimony over two days. Michelle Boat testified on Monday and was the only witness the defense put on the stand.

Boat gets life sentence for murder

KNOXVILLE — The sentence was no surprise: Michelle Boat will spend the rest of her natural-born life in prison.