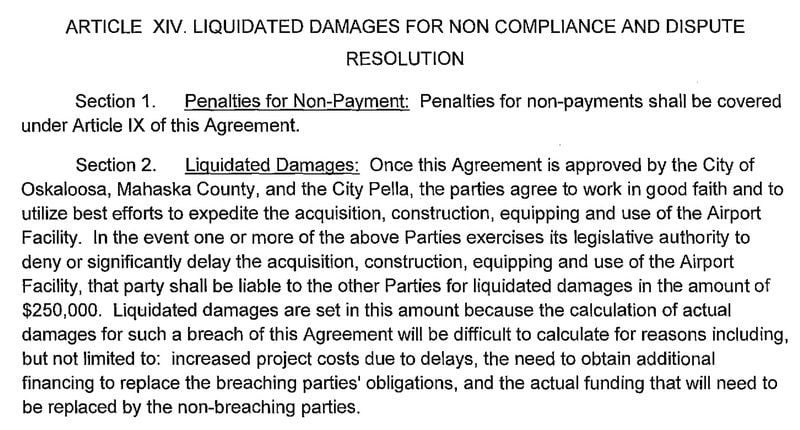 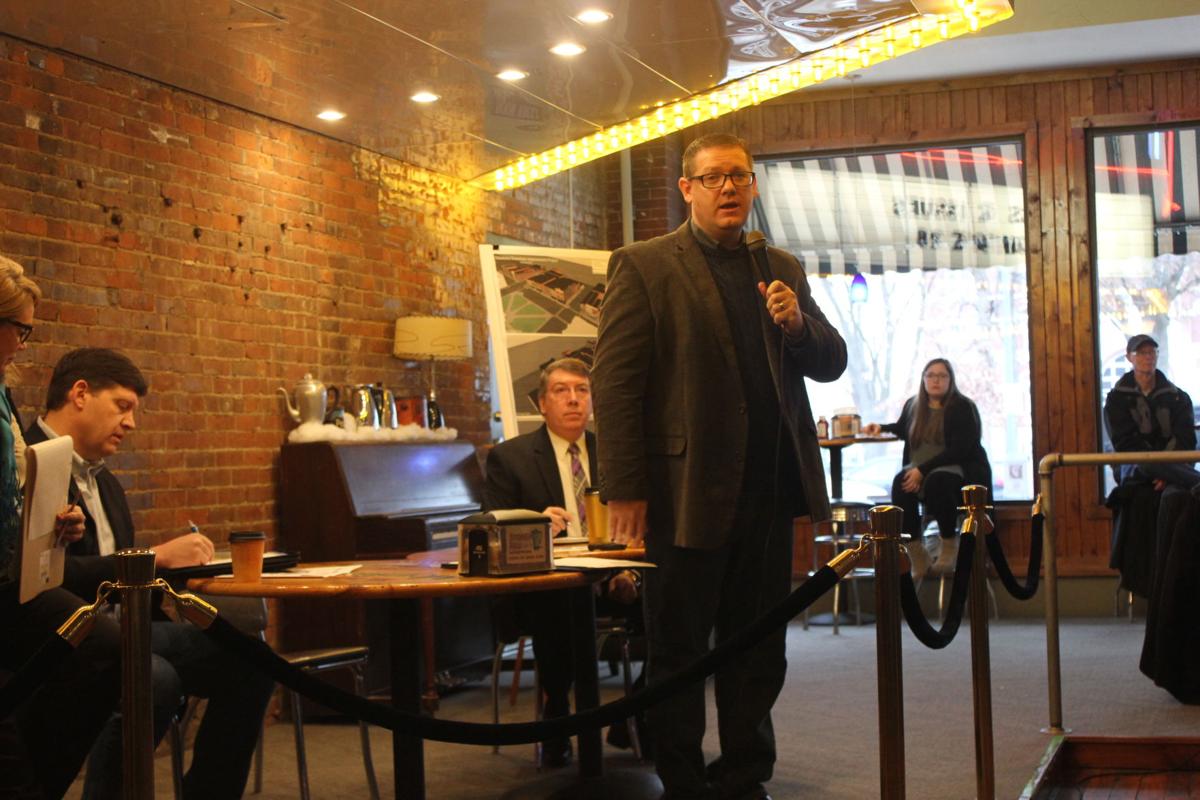 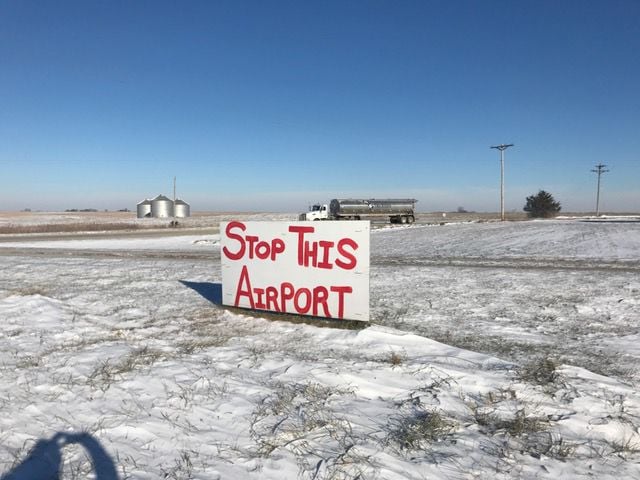 One of the many anti-regional airport signs along Highway 163.

One of the many anti-regional airport signs along Highway 163.

OSKALOOSA — The debate over the proposed regional airport project has raged since 2012, with the main focus on whether or not to build the airport.

But as the project slowly moves forward, a new angle on the issue has developed: a budding legal argument about the meaning of wording, phrases and stipulations in a 28E Agreement between the cities of Oskaloosa and Pella and Mahaska County.

The proposed regional airport project is guided by the Federal Aviation Administration, as well as the South Central Regional Airport Agency Board. The project is detailed in a 28E Agreement signed in 2012 by representatives from Pella, Oskaloosa and Mahaska County.

The legal standing of the 28E Agreement—a 15-page document—has become the centerpiece of opposition to the airport project from both the private landowners whose land may be taken for the project as well as the Mahaska County Board of Supervisors, which voted in late June to stop participating in the project altogether.

At question are two parts of the 28E Agreement, Article XI - Amendments and Termination - and Article XIV - Liquidated damages for non-compliance and dispute resolution.

On one side of the argument is the chairman of the Board of Supervisors, Mark Doland, who has spearheaded resistance to the airport along with fellow Supervisor Mark Groenendyk. Both Doland and Groenendyk have voted in favor of resolutions to have the county leave the 28E Agreement as well as to end the county’s role in the project.

The six families who own land in the project’s path have also cited the 28E Agreement’s supposed lack of legal standing in opposing the project. Some of the arguments landowners have put forth include the disconnection of a vital farm to market road—220th Street—as well as the possibility that eminent domain cannot be used against the landowners if Mahaska County drops out of the project.

The Mahaska County Board of Supervisors hired an outside, independent attorney in February—Daniel J. Gonnerman—to represent the county in efforts to leave the agreement. Several of the families that own land in the airport’s path have also hired their own attorney—Des Moines-based Gary Dickey.

Dickey has written several letters to the SCRAA Board with legal arguments about why the project cannot continue without Mahaska County’s involvement.

“As I explained in our previous correspondence, without Mahaska County involved, the South Central Regional Airport Agency lacks the power of eminent domain to condemn my clients’ land,” Dickey wrote in one letter. “Clarke County Reservoir Comm’n v. Robins, 862 N.W.2d 166, 176 (Iowa 2015) (observing that creation of a 28E agreement “confers no new powers on the entities involved, but only allows for the joint exercise of existing powers”). Accordingly, we request the SCRAA add an agenda item for its next meeting that commits to finding another location for the project that does not require the use of Mahaska County’s eminent domain authority.”

Dickey replied to a Herald request for comment on the airport issue on July 12.

Those in support of the airport project, namely Supervisor Willie Van Weelden, members of the SCRAA Board and representatives from the cities of Pella and Oskaloosa, have repeatedly pointed to the 28E Agreement and the stipulations listed in the document as reasons why Mahaska County must continue to cooperate in good faith with the project and partners Pella and Oskaloosa.

When the Mahaska County Board of Supervisors voted in January to ask to be let out of the agreement, the city councils in Pella and Oskaloosa voted unanimously to not allow the county out of the agreement. After the second resolution was approved by the supervisors in June, the Pella City Council acted first—voting unanimously on July 3 to reject the attempt to leave by the county. The Oskaloosa City Council has not taken up the issue yet.

SCRAA Board Chairman Jim Hansen said he is somewhat frustrated by Doland’s continued insistence that the county isn’t bound to the airport project by the terms of the 28E Agreement.

“That’s the position the cities are taking and that’s what the agreement says,” Hansen said in a telephone interview on July 11. “[Doland’s] Attorney does not think that. I’d prefer to sit down with the three parties and work it out.”

Doland has repeatedly said the 28E Agreement—and a $250,000 possible fine for any party not participating in the project—has no legal backing and is unenforceable. He has also said the county can withdraw from the agreement without permission from the city councils in Pella or Oskaloosa.

“The legal reason [the fine is not enforceable] is the Supreme Court has said liquidated damages can’t be more than actual damages,” Doland said, adding that the SCRAA has not spent much money on the project, so $250,000 cannot be fined. “I’m not worried about [financial penalties].”

Doland said in a June 19 interview that Mahaska County was no longer cooperating in any manner with the project, that the county was recalling its representative to the SCRAA Board—Joe Warrick—and that the county’s attorney would attempt to meet with legal counsel from Pella and Oskaloosa to negotiate the county’s withdrawal from the project.

“We’re terminating our role in the contract,” Doland said on June 19. “We are no longer a partner [in the 28E Agreement], that is our position. There is a legal process to exiting [the agreement] we believe we’ve followed it. If they would like to try to enforce the liquidated damages clause, we’ve also been informed that isn’t enforceable under Iowa law.”

On July 11, Doland said he was contacted by the county’s attorney and told that the city of Oskaloosa has denied a request to meet with their attorney and that he had not received any correspondence from officials with the city of Pella.

The project is planned for more than 580 acres of prime farmland north of Highway 163 and west of Oskaloosa. The airport—if built—would tentatively open in either 2024 or 2025 at an estimated cost of about $24 to $30 million. The project would be funded with 90 percent of the costs paid by the FAA and the remaining 10 percent of costs split between the cities of Pella and Oskaloosa. Mahaska County has no financial responsibility for the project.

Hansen said despite the current legal wrangling, the airport project continues to move forward. At the June 27 meeting of the SCRAA Board, plans for land acquisition for the project were discussed.

“We’re going to keep plugging away at it,” Hansen said. “And at some point, it will be resolved.”