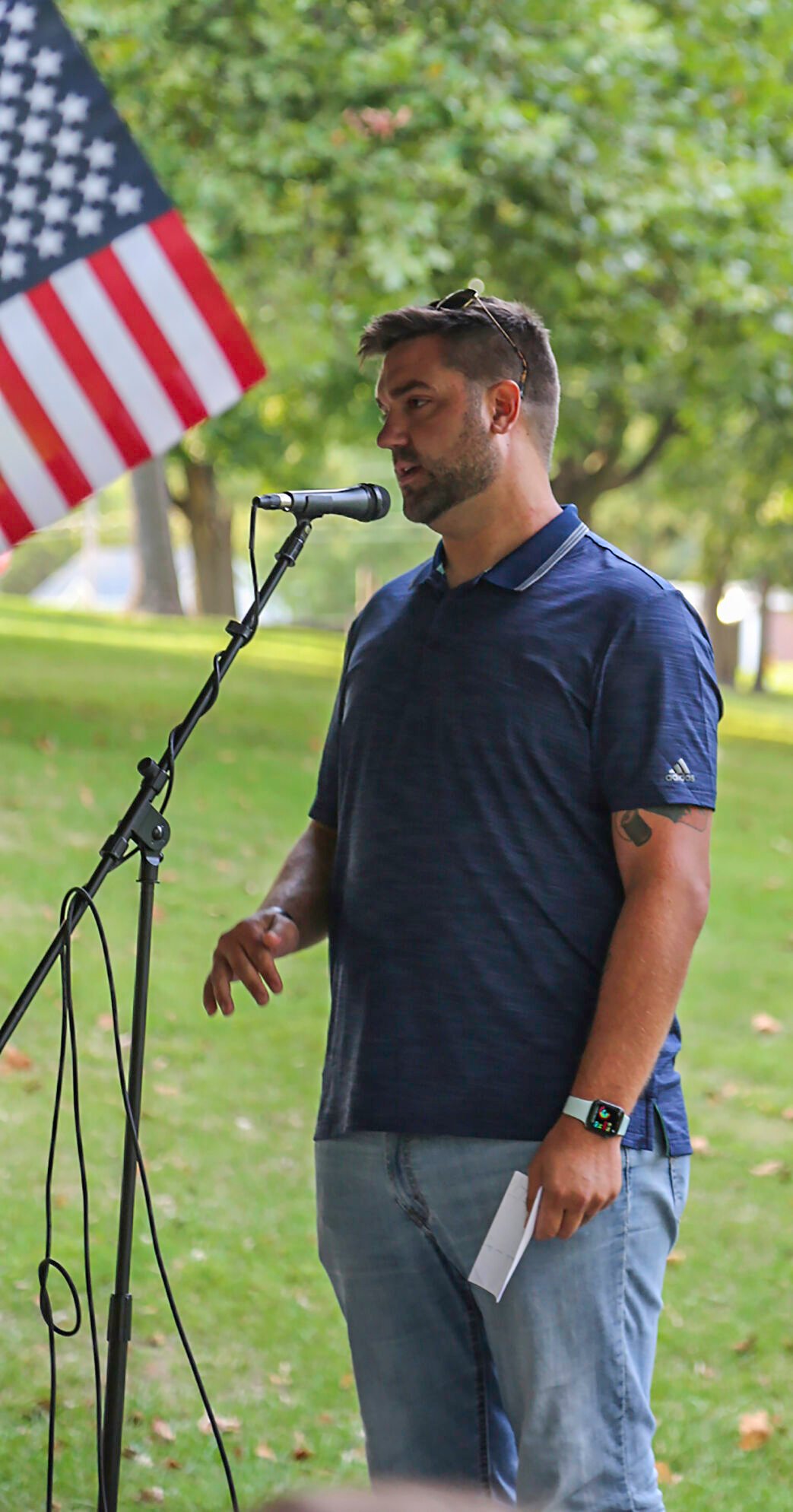 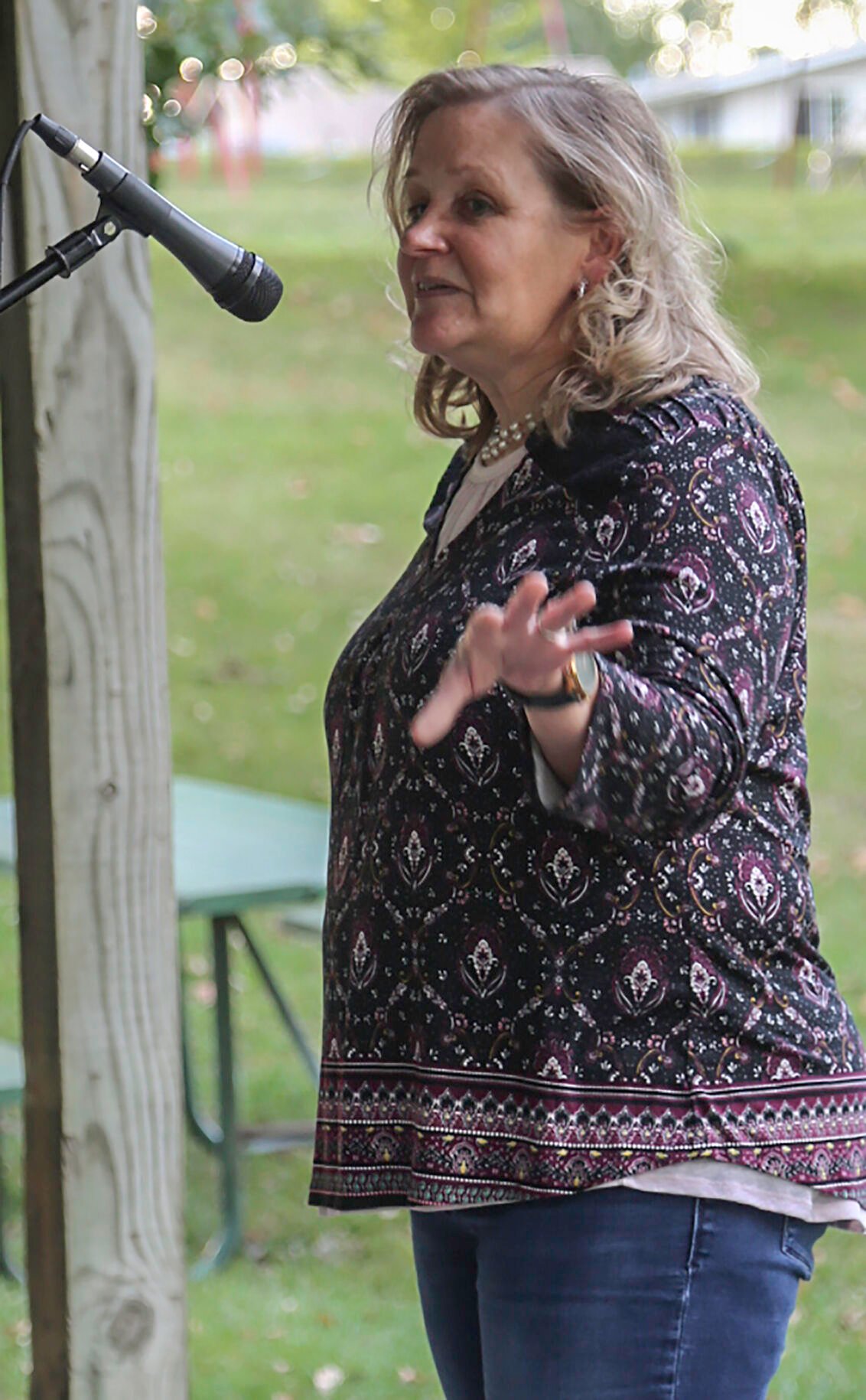 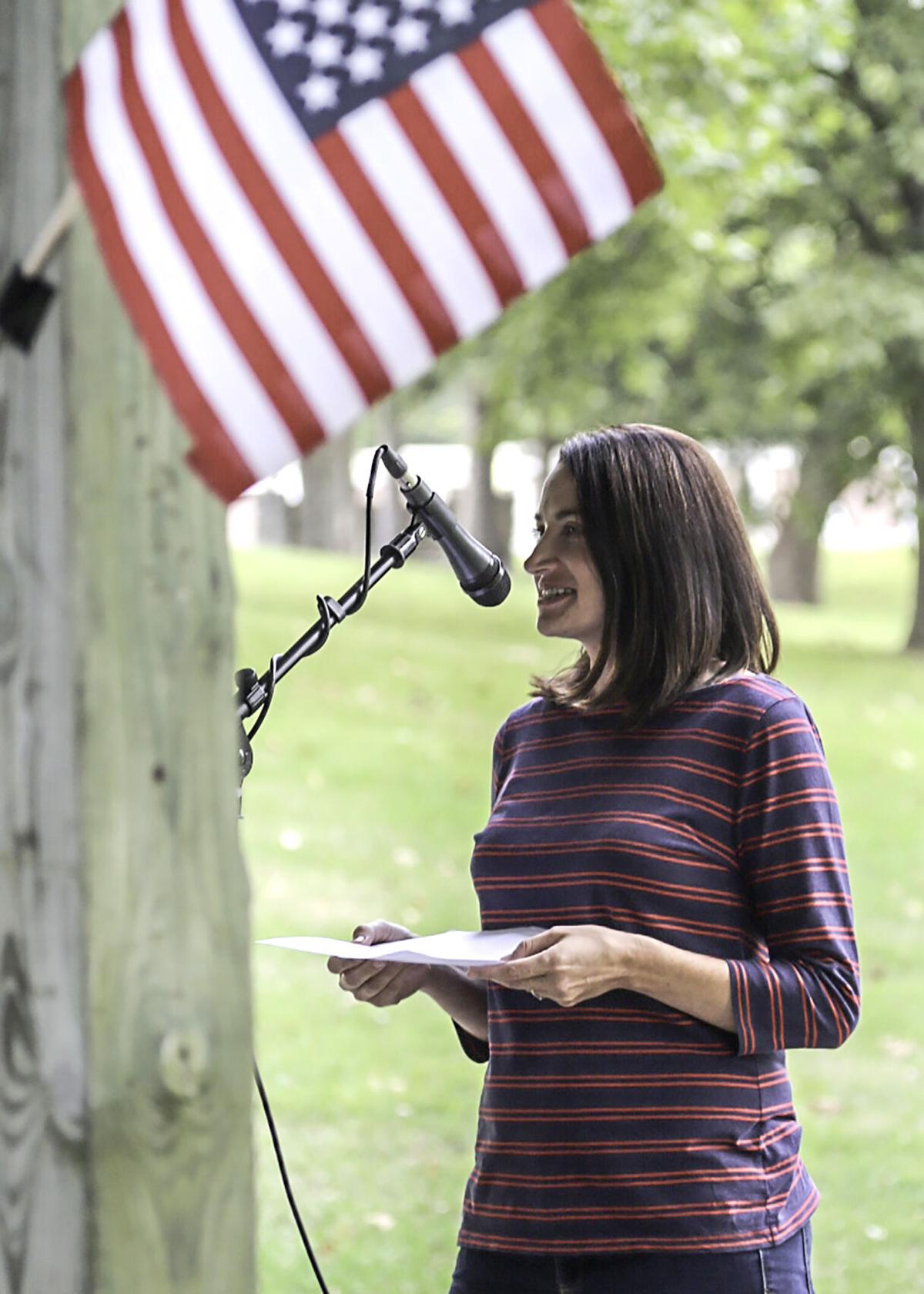 Kathryn Kaul-Goodman, a Democratic candidate for Mahaska County Board of Supervisors, speaks during "Live at Five" on Friday. 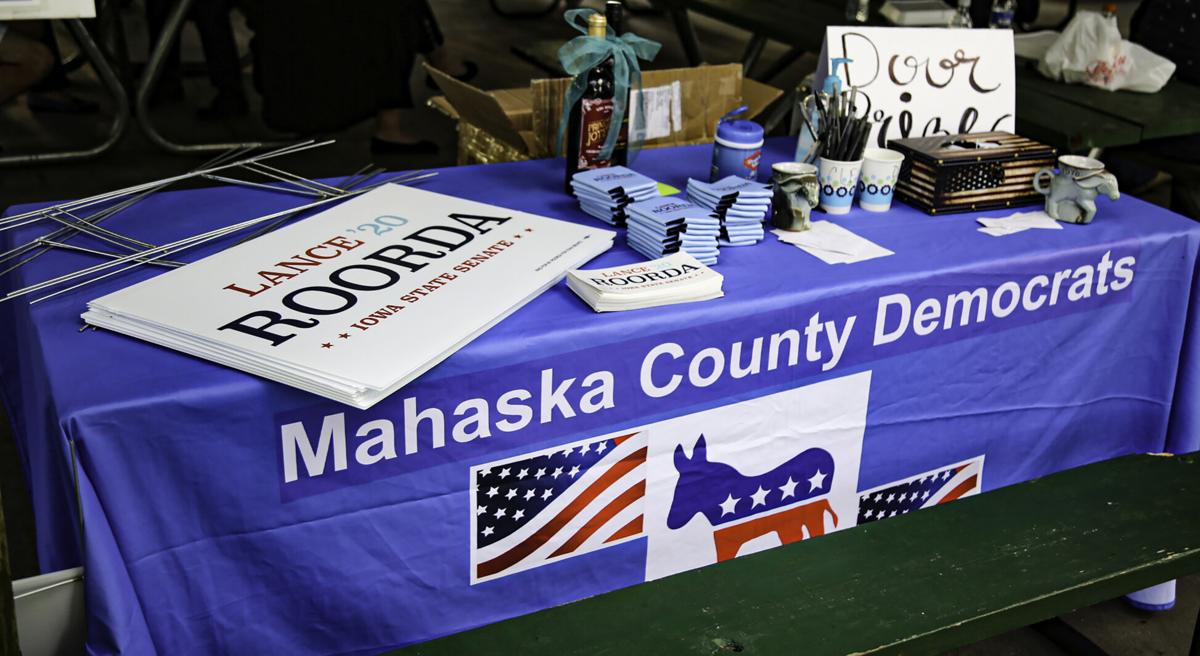 Campaign materials for Mahaska County Democrats sit on a table during Friday's "Live at Five" event.

Kathryn Kaul-Goodman, a Democratic candidate for Mahaska County Board of Supervisors, speaks during "Live at Five" on Friday.

Campaign materials for Mahaska County Democrats sit on a table during Friday's "Live at Five" event.

County Democratic Chair Eric Palmer emceed the event and introduced each of the candidates.

Kathryn Kaul-Goodman, candidate for Mahaska County Supervisor is challenging Republican incumbent Mark Groenendyk. That race is for a 4-year term.

Born on a Wisconsin dairy farm, Kaul-Goodman is the oldest of four siblings and grew up in northern Illinois after her parents had to sell out during the 1980s farm crisis.

She arrived in Iowa to attend Iowa State where she earned a bachelor’s degree in mechanical engineering. She has worked in both engineering and non-engineering roles for Pella Corporation and more recently has worked in market research consulting. She and her husband, Chris, along with their daughter, Kate, have lived on a small acreage outside Leighton since 2009.

A long-time Republican, Stephen Kelly, has previously endorsed Kaul-Goodman. He serves with her on the solid waste commission and is also a University Park city council member.

In her remarks, Kaul-Goodman emphasized her desire to bring more cooperation and accountability into the process to end the expensive lawsuits and discord that she sees defining the current team of supervisors.

“My opponent has overseen roughly $387,000 in current legal bills from November 2019 through July 2020, and over $800,000 in total over his entire term, as well as increasing his own budget 377 percent since coming into office,” said Kaul-Goodman

Dr. Lisa Ossian, who will face Republican Chuck Webb, also introduced herself to the crowd and summarized her campaign goals.

Ossian and her husband settled in Oskaloosa in Mahaska County three years ago because of the historical homes, modern county health facility, prosperous town square businesses, a strong library, and the recreational options of a YMCA and long bike trails.

“All of those things are what make Oskaloosa a home for us,” said Ossian, “and I love the spirit of Mahaska County.”

Ossian, a 50-year Iowa resident, has earned two degrees from Iowa State University. Her husband, Vince, has family from rural Ottumwa, Ossian and her husband have three grown daughters, along with grandchildren.

Ossian highlighted a deficiency in female participation in the county supervisor role to bolster her bid for the office.

“In Mahaska County in the last 175 years there has not been one single woman on the board of county supervisors. My experience has allowed me to spend years gathering information and helping to hash out solutions to tough problems, and I feel I can leverage all that experience now to help the residents of Mahaska County in this county supervisor role.”

Palmer next introduced Lance Roorda, who is running against incumbent Ken Rozenboom for the Iowa State Senate seat in District 40, which includes Mahaska county as well as portions of Appanoose, Marion, Monroe and Wapello counties.

Roorda is a native of Leighton and graduated from Pella Community Schools.

Roorda moved to Des Moines after college, and he now lives on his family’s Century Farm in Mahaska County with his wife and children, as a sixth-generation farm family. Roorda owns and operates Eunoia Counseling in Oskaloosa.

Roorda spoke enthusiastically about the privilege of running for elected office.

“People often forget just how much of a privilege it is to run, because not everybody gets the unique opportunity to do this,” said Roorda.

As a licensed independent social worker, Roorda says mental health is important to him, along with education and natural resources.

“My experience in the mental health field has shown me that it’s my civic duty to get involved and address the mental health issues we currently have right here locally,” says Roorda. “The state has created plenty of programs designed to help, but those programs don’t get funded, so the help never comes. Managed care organizations are now limiting the amount of mental health services that Iowans can have access to, so now in Oskaloosa, there are no substance abuse help providers, and the psychiatrists have all left to go to Ottumwa, Grinnell and Des Moines.”

In one emotional portion of his speech, Roorda went on to say that 30% of the children in Oskaloosa cannot afford to go to the dentist, and the average waitlist for an inpatient substance abuse facility in Iowa is currently 45 miles away and 30 individuals long. Iowa is number 51 out of 51 (because the data includes Washington, D.C.) in available inpatient mental health beds. When people can’t get into substance abuse services and they can’t get into mental health services, people die,” an impassioned Roorda said.

Roorda said he wants to run a campaign he can feel good about.

“This isn’t self-serving for me. My goal is to raise awareness for issues that I think everybody needs to know about and that affect everybody. This isn’t something that I just willingly jumped into,” he said. “I had a lot of reservations about being a public figure and whether or not this was a good idea for me while being a new business owner with young kids. But, I believe I have the kind of values that we need to apply to the actual legislation so that the hypocrisy I currently see in it can be eliminated, and I feel the community deserves that effort.”