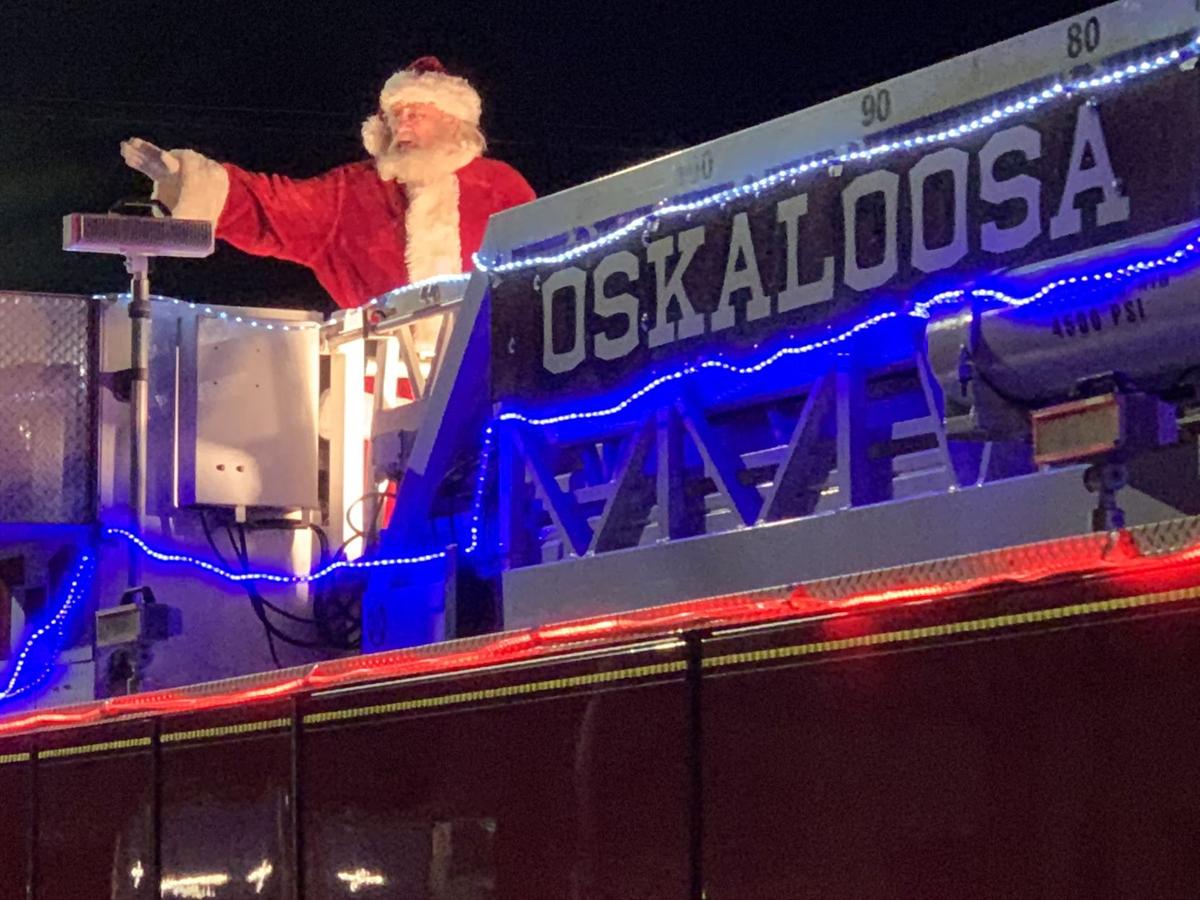 Santa waves to Lighted Christmas Parade-goers. In 2019, the parade was moved from a Thursday to a Saturday.

Santa waves to Lighted Christmas Parade-goers. In 2019, the parade was moved from a Thursday to a Saturday.

OSKALOOSA – It’s no secret that last December Oskaloosa was ranked number one for ‘Christmas In These 10 Iowa Towns Looks Like Something From A Hallmark Movie’ by Only In Your State.

The traditional holiday events that Oskaloosa Main Street hosts are hugely responsible for this honor with events like Painting with Lights and the Lighted Christmas Parade.

While Painting with Lights is a relatively new tradition, events like the Festival of Trees have been occurring for over 25 years and the Lighted Christmas Parade has been around for over 30 years. Oskaloosa Main Street Financial Manager Deb Bruxvoort said requests from the community is the reason the parade lives on today.

“Because they keep asking for it. You know, why would you stop something that people like,” she said. “Last year was very cold and it was even misting and icing and even then we thought, ‘do we cancel it.’ ‘No, we can’t cancel it,’ and we still had a decent crowd. And it wasn’t a huge crowd, but people were still there and then they have the opportunity to watch it after the parade on the local MCG Channel, they’ll air it several times. And so then you think about that, how many people aren’t there that still get to benefit from it, the music, the narrations, the lights, the looks, you know, all of that.”

Oskaloosa Main Street Director Emily Brown added that after all these years, the Lighted Christmas Parade has never been canceled. It’s an event that no matter the circumstances, each year you can count on it happening.

“I think that there’s a lot of value to just kind of having an event that the whole community embraces,” she said. “And I think that as Main Street, we should be proud that that’s something that we can give to the community and we’ve never come upon a reason that we should not do it, and it’s never been canceled. We’ve had to run salt and sand trucks in front of it, or push the Clow train. But there’s always been a parade and there’s always been people there to watch it.”

This year the Lighted Christmas Parade has had a pretty big change. Traditionally the parade was held on a Thursday and it was a two-day event that lasted through to Friday. The very first Lighted Christmas Parade was held on Thursday, Dec. 8, 1988, and it featured 30 businesses, organizations and individuals participating as entries. The parade initially began as a retail event and local businesses downtown stayed open until 11 p.m.

“So, when the parade was first started it was a Thursday night and it was primarily a retail event,” Brown said. “So at that time there were stores that would stay open late on Thursdays, so it was really trying to kind of play on that high traffic. Over the years, it’s kind of changed, and more recently we’ve heard a lot of requests that it’d be on a weekend, a lot of requests and so we decided that it was time to give it a try.”

Deb Bruxvoort recalled her experiences attending the parade from its earlier years.

“I do remember that they used to have the stores open afterward and it was fun to go shop and the evening,” she said. “At that time my kids were little and my husband was home with them, so after the parade, I got to shop, and you had your list and you just went all through downtown and shopped and got your Christmas stuff started, or ended, or whatever it’s always early enough in the month of December, and sometimes even the last week of November, that it kind of gets you in the spirit of shopping.”

A special appearance from Santa is one thing that has always remained the same. In fact, Lyle Williams has been playing Santa during every Lighted Christmas Parade since the beginning. Williams said the kids are what keeps him participating in the parade.

“It’s been one year after the next,” he said. “They’ve had different rides for me to get on, the first one I rode on was a buggy held by a donkey. And the donkey went wild and about wrecked everybody that was in the cart. The next one I had was a big sleigh that was donated by the bank. I was in that for five years and ever since I’ve been on the fire trucks playing Santa Claus. Even when the kids see me without my suit, they run up saying, ‘hey Santa.’”

Santa Lyle said the reason he continues to get in that suit is because of the kids.

As for the Festival of Trees, Oskaloosa Mainstreet has only been hosting it for the past three years. The first Festival of Trees was held in Oskaloosa was on Dec. 5, 1992, and it was hosted by parents of students at Oskaloosa Christian School and it served as a fundraiser for the school. Oskaloosa Christian School Secretary Patti Westra said the name of the event was later changed to the “Festival of Christmas Delight” when they broadened the activities for the event. The Festival of Christmas Delight continues today, only trees are no longer a part of the event.

“The first year of the Christmas Festival was December 5, 1992. At that time it was called the Festival of Trees. It was later changed to Festival of Christmas Delights because it also included crafts and baked goods. It served as a fundraiser for our parent’s group, so there was an admission charge. Now we have continued with just the bake sale and invited vendors and craters and there is no admission charge.”

Below is a quote taken from Oskaloosa Christian School’s Directory about the very first Festival of Trees held as the school.

“Festival of Trees – A time to share the Christmas spirit with the Oskaloosa community. Trees will be decorated in a variety of themes with Christmas music spreading cheer to everyone. Christmas goodies will be available along with cider and coffee.”

In 2015, Mahaska County 4-H and Youth Development began hosting their own Festival of Trees as a fundraiser to help support expenses needed for the County Fair. In 2017, County Youth Coordinator Amy Brainard made the decision to pass the torch on to Main Street as it was becoming too much them to continue with so much going on at the end of the year.

“It was a fundraiser for 4-H and we use those funds to help support the county fair expenses, so it helped us pay for our judges, our ribbons, our trophies, premiums and things that the kids received during the county fair. Then we just kind of found that it was quite a bit of work during a very, very busy time for us, that a lot of the bulk of the work was happening. When you’re trying to process the old year and get ready for the new year and have our 4-H Awards. It was just quite a bit on my plate to do all in the fall, so we step back from that and Main Street took it on and it’s been a great fundraiser for Painting with Lights ever since.”

Of all the holiday traditions that Oskaloosa has, Painting with Lights is considered the latest addition.

Painting with Lights began in 2016 when Chamber brought in a consultant to provide suggestions on tourism and things Oskaloosa could downtown to attract more people.

“Around 2016, we brought in a consultant that did some work through the Chamber and he had gone through and made a lot of suggestions, many of them surrounding like tourism. I think that kind of got the wheels turning in people’s heads, ‘how do we create something that is special,’” she said. “And so I think the people on that committee love of Christmas was already there. So they played around with different ideas of things that they could do with light displays, and I’m sure did quite a bit of research at the time to figure out what was possible, and Painting with Lights is was is kind of the final product of that and we do fundraising every year to continue that.”

The lights that you see “painting” the buildings surrounding Town Square are a product of fundraisers like the Festival of Trees, the Young Ambassador Contest, Christmas in July and through ads in the Herald.

“There are businesses that make contributions, we do different fundraising events like the Festival of Trees, Christmas in July and there’s a couple others, Merry Little Downtown Christmas, a couple odds and ends,” Brown said. “So the business contributions events, and then we actually have put out ads in the Herald, like a little clip it out, and they mail it back with a check. It’s actually kind of neat. because anybody can be a part of making that happen at any level. We have people that give us $1,000 and we have people that contribute, you know, when they send in a $10 check in the mail or when you buy a beer at Christmas in July. So there’s a lot that goes into it and it’s really diversified as far as who supports it.”