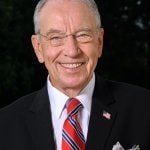 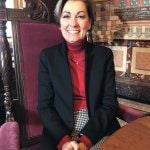 Gov. Kim Reynolds discusses legislative issues in her office at the Statehouse on Dec. 19, 2019 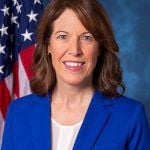 Gov. Kim Reynolds discusses legislative issues in her office at the Statehouse on Dec. 19, 2019

Reaction from Iowa on President Trump’s signing of the initial trade deal with China was quick and mostly positive.

The phase one deal includes a promise from China that it will double its purchases from U.S. farmers in the first year, CNN reported.

China is one of the largest markets for Iowa soybeans and pork.

U.S. Sen. Charles Grassley, R-Ia., was on hand for the signing ceremony.

“President Trump and Ambassador (Robert) Lighthizer should be commended for this significant progress toward a full and enforceable deal with China,” Grassley said in a statement. “Farmers have borne the brunt of retaliation throughout this trade war.

“At the White House today, I was thinking of my neighbors in Iowa and all the other farmers across the country who have stood strong throughout this process,” Grassley said.

Grassley remained cautious about future trade with the Communist power. “I hope this proves to be a turning point in our economic relationship with China, but I’ve seen enough history to be clear-eyed,” Grassley said. “Not only must China follow through with its commitments in this Phase One deal, but also work toward a comprehensive agreement that ends forced technology transfers, intellectual property theft and unfair restrictions on U.S. goods, including agriculture. Only then will we know if China can be a reliable economic partner in the 21st century.”

Iowa Gov. Kim Reynolds, a Republican whose predecessor and mentor, former Gov. Terry Branstad, is U.S. ambassador to China and worked on the deal, said in a statement she considers the pact “historic.” A day after delivering her Condition of the State address at the Iowa Statehouse, she attended the signing of the 86-page trade agreement.

“By opening and expanding markets for our products, protecting intellectual property, and setting standards for currency valuation, President Trump has provided the American economy with a foundation for exponential growth and economic prosperity,” Reynolds said. She thanked Branstad and Lighthizer for their months of work behind the scenes.

“The signing of phase one agreement between the U.S. and China is an important first step toward stabilizing our global trade relationships,” IBC Executive Director Joe Murphy said in a statement.

“Increases in purchases of American farm, manufactured and energy goods and services by China coupled with enhanced protections for American companies are key pieces to providing certainty for Iowa businesses to thrive. We look forward to the agreement taking effect,” Murphy added.

Part of the negotiations with China have surrounded addressing a long practice of the Chinese demanding access to intellectual property in return for access to the market, and in some cases allegations of theft of trade secrets.

U.S. Rep. Cindy Axne, a Democrat who serves on the House Agricultural Committee, said she hopes the deal helps Iowa farmers who “have been the ones to pay the price” as China retaliated against the U.S. tariffs by targeting U.S. soybeans and pork for tit-for-tat actions. Iowa leads the U.S. in pork production and pork exports and is the second-largest producer of soybeans.

“As I’ve traveled through Southwest Iowa, I have heard concerns directly from farmers I represent in Washington — concerns about how long this trade war has gone on, how difficult it will be to reclaim lost markets, and how deep the seeds of uncertainty have been laid as a result of protracted tensions with China,” Axne said in a statement.

“I’m hopeful that today’s phase one agreement with China puts us on a path to ending this harmful trade war, and I will closely monitor the implementation to ensure Iowans are receiving what they’re promised,” Axne added.

“This administration must finalize a deal that will be enough to make up for what Iowa farmers have lost. We have seen China go back on their word time and time again, and any agreement must reflect a need for guarantees and enforcement mechanisms to protect our farmers’ futures.”

Republican Party of Iowa Chairman Jeff Kaufmann said in a statement, “The Trump Administration’s phase one trade agreement with China is another huge win for Iowa farmers. Under this trade deal, China has committed to purchasing at least $200 billion in American products and services, along with $32 billion in agricultural products over the next two years.”