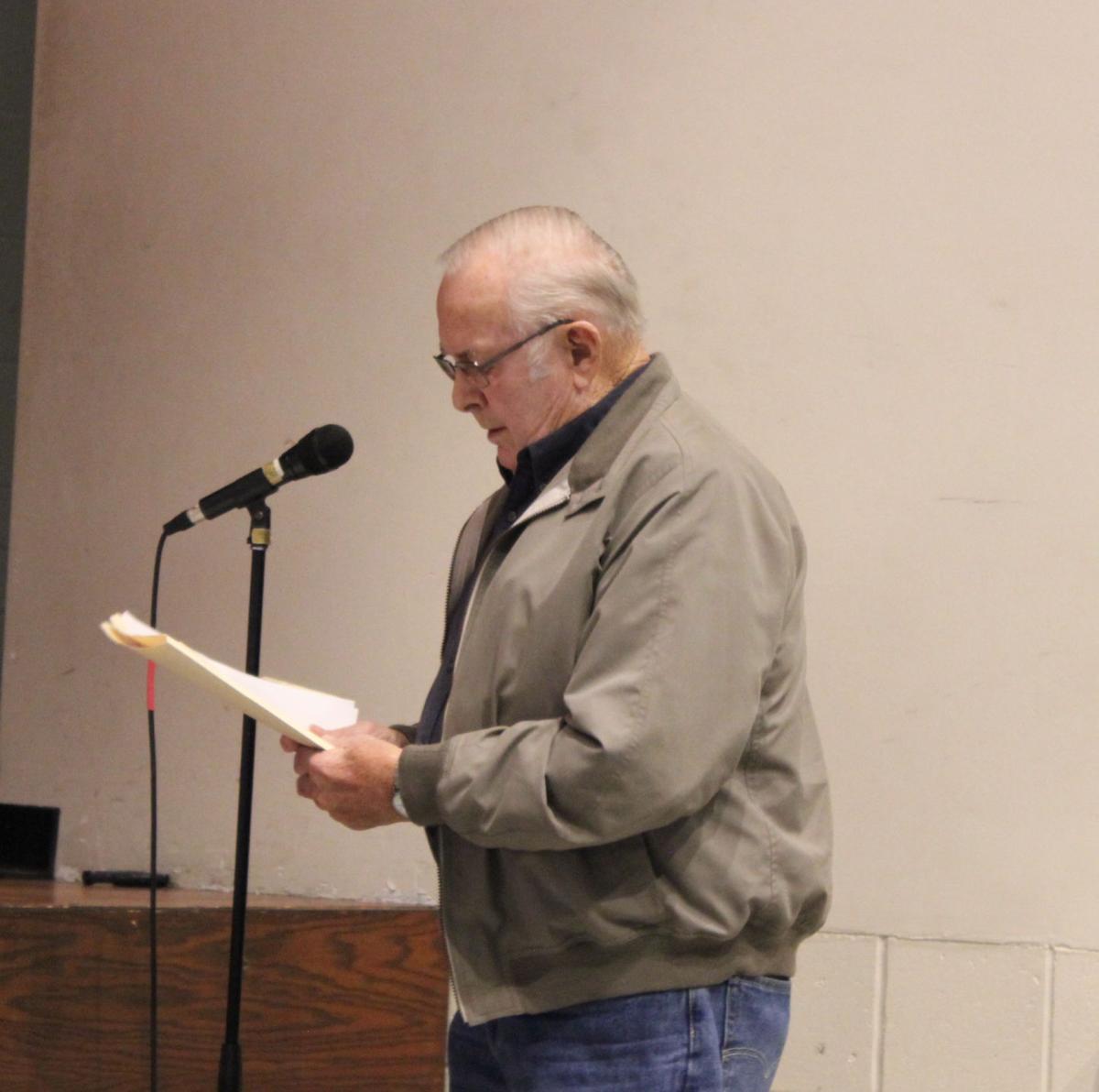 John DeRooi speaks at the Nov. 22 public hearing about the first draft of the Federal Aviation Administration environmental assessment for the proposed South Central Regional Airport project. DeRooi owns land that would potentially be taken if the project moves forward as planned. 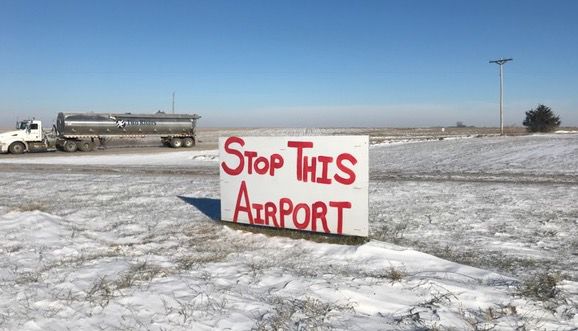 This sign is one of dozens placed along Highway 163 near the proposed South Central Regional Airport project. All of the signs have an anti-airport message of some sort, encouraging public officials to stop the project.

John DeRooi speaks at the Nov. 22 public hearing about the first draft of the Federal Aviation Administration environmental assessment for the proposed South Central Regional Airport project. DeRooi owns land that would potentially be taken if the project moves forward as planned.

This sign is one of dozens placed along Highway 163 near the proposed South Central Regional Airport project. All of the signs have an anti-airport message of some sort, encouraging public officials to stop the project.

OSKALOOSA — The Federal Aviation Administration has approved a finding of no significant impact for the proposed South Central Regional airport environmental assessment, meaning that officials can move into the land acquisition phase of the project.

Jim Hansen, chairman of the South Central Regional Airport Agency Board, verified the FAA finding in a telephone interview Tuesday, June 13. He said that copies of the finalized and approved environmental assessment are available at the Mahaska County Courthouse, the Pella and Oskaloosa city halls and from the FAA office in Kansas City.

"We're pleased to have moved the project to this point and we're looking forward to moving ahead with the project," Hansen said. "We intend to keep going [with the project] and hope to work with people."

The proposed airport would not be open to commercial air travelers, and would be utilized by regional corporate airplanes and jets as well as other pilots such as crop dusters. The plan includes constructing three runways, a terminal building and hangar space for as many as 52 aircraft. Once completed and open, the existing airports in Pella and Oskaloosa would be closed permanently.

Hansen said details of the next steps in the project will be discussed by members of the SCRAA Board during their next meeting, which is scheduled for 6 p.m., Tuesday June 27, at the Oskaloosa City Council Chambers on South Market Street.

"Things are progressing. I think at the next [SCRAA] board meeting, we hope to put out requests for proposals for consultants for the next stage of land acquisition and legal counsel as well," Hansen said.

The project has faced fierce opposition from both local politicians as well as area farmers. Many see the project as catering to the corporate interests of Pella Corp., Vermeer and Musco Lighting in Oskaloosa.

Local farmer and land owner John DeRooi said he was unaware of the FAA finding of no significant impact, and he said he is disappointed to learn of it and also saddened by the project moving forward.

"We've been here 130 years...it hurts," DeRooi said of the possibility of losing any of his family's land. "I just don't understand it. I feel bad about it."

DeRooi said if the project goes forward as planned, he estimates he would lose a portion of the land his family owns and farms, as well as land he rents to another farmer.

"They would take half of the best 50 acres we own, and they would go through the middle of 100 acres of land I rent out," DeRooi said. "It is top land."

DeRooi and his family are one of about at least six different land owners who would be affected by the proposed airport. Calls to the attorney representing several of the landowners—Gary Dickey of Des Moines—were not returned as of 5:40 p.m. Tuesday.

Hansen said the next phase of the project is to develop a land acquisition plan, hire consultants for that task, hire property appraisers and also develop a funding plan for the project. The estimated $25 to $35 million cost of the project is reportedly being split by the cities of Pella and Oskaloosa and the FAA, with the majority of the funding coming from the FAA.

"The FAA has asked us for a funding plan, from the cities of Pella and Oskaloosa, for land acquisition. We'll have to decide if we need some funding," Hansen said. "Generally what you do is buy a piece of property or a couple of pieces of property and ask the FAA for carrying costs—like interest."

Hansen explained that if a piece of land was purchased for $100,000, the initial cost would have to be paid in equal 5 percent portions by the cities of Pella and Oskaloosa, which would then request from the FAA a reimbursement for 90 percent of the land's cost.

"The FAA will pay 90 percent of what are called the land-based improvements, which includes runways," Hansen said. "The cities of Pella and Oskaloosa will split the remaining cost equally, 5 percent each."

Members of the SCRAA executive board, including Hansen and Oskaloosa City Manager Michael Schrock and Pella City Manager Mike Nardini, met with FAA officials last week in Kansas City to discuss the project.

Hansen said rumors of a reduction in FAA funding in the proposed federal budget put forth by President Donald J. Trump have not affected planning for the project.

"I don't expect there to be any impact from [Trump's budget]," Hansen said. "We met with the FAA last week—they're just [doing] business as usual."

Mahaska County Supervisor Mark Doland, who has been against the project since its inception, said he was aware of the FAA decision on the environmental assessment.

"I've got a copy of it, but I haven't been able to read it," Doland said of the final report. "It isn't a surprise to me. This is the second and final approval, so it wasn't a surprise."

Doland said due to the Board of Supervisors voting 2-1 earlier this year to leave the 28E Agreement with Pella and Oskaloosa, he does not consider Mahaska County a party to the project anymore.

"I think the stance of the Board of Supervisors is we voted to exit the agreement," Doland added. "As far as we are concerned, we are out of the agreement. My position is we're out."

Doland said the Board of Supervisors are mainly concerned with the possible closure of 220th Street, a prime farm to market road used by local farmers. There have been discussions about making a circular road around the airport to replace 220th Street, but nothing has been finalized, Doland added.

The project now moves forward into the land acquisition phase, Hansen said, which means the properties needed for the project will be examined by consultants and then appraised for value by at least two different independent property appraisers.

Landowners will asked to sell their land and be offered a price for their property first. If those efforts are unsuccessful, eminent domain proceedings would possibly be considered, he added.

"We'll be looking at  probably September [time frame] before we try to acquire the properties," Hansen said.

DeRooi said he doesn't want to sell his family's land, and he feels that the situation may be a potential example of eminent domain abuse. He also said his family intends to hold out as long as possible.

Dispute over legal interpretation at root of airport rift

OSKALOOSA — The debate over the proposed regional airport project has raged since 2012, with the main focus on whether or not to build the airport.

Darcy Lynn Spain, 62, of Waterloo, died Oct. 10, at her home. She was born May 1, 1959 in Knoxville, Iowa, the daughter of Alyn H. and Sandra J. Emanuel VanderSluis. Darcy graduated from Knoxville High School and worked for several businesses as an office manager. She is survived by: her mot…