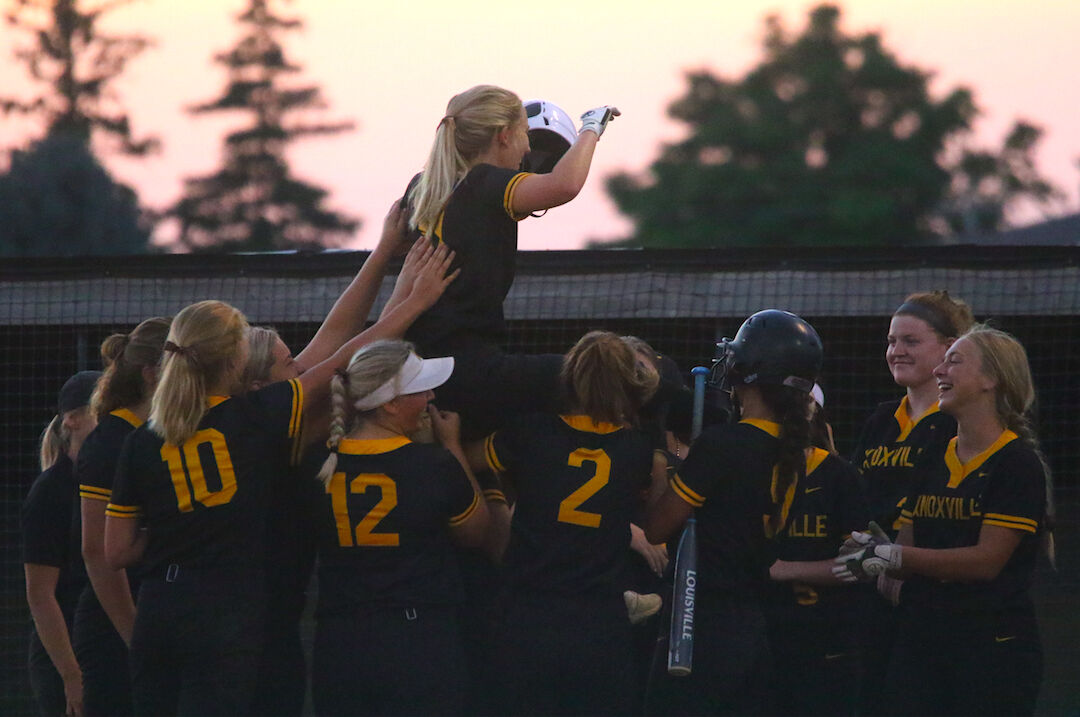 Knoxville's Kalli Wilson is hoisted up by her teammates after her walk-off hit against Pella. 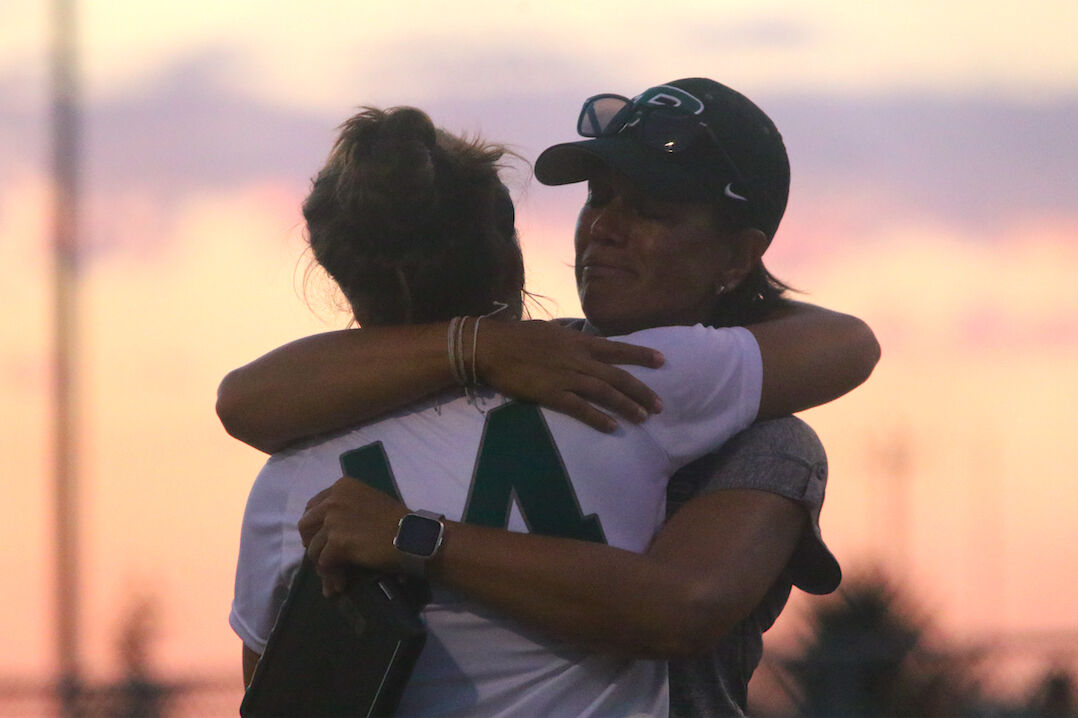 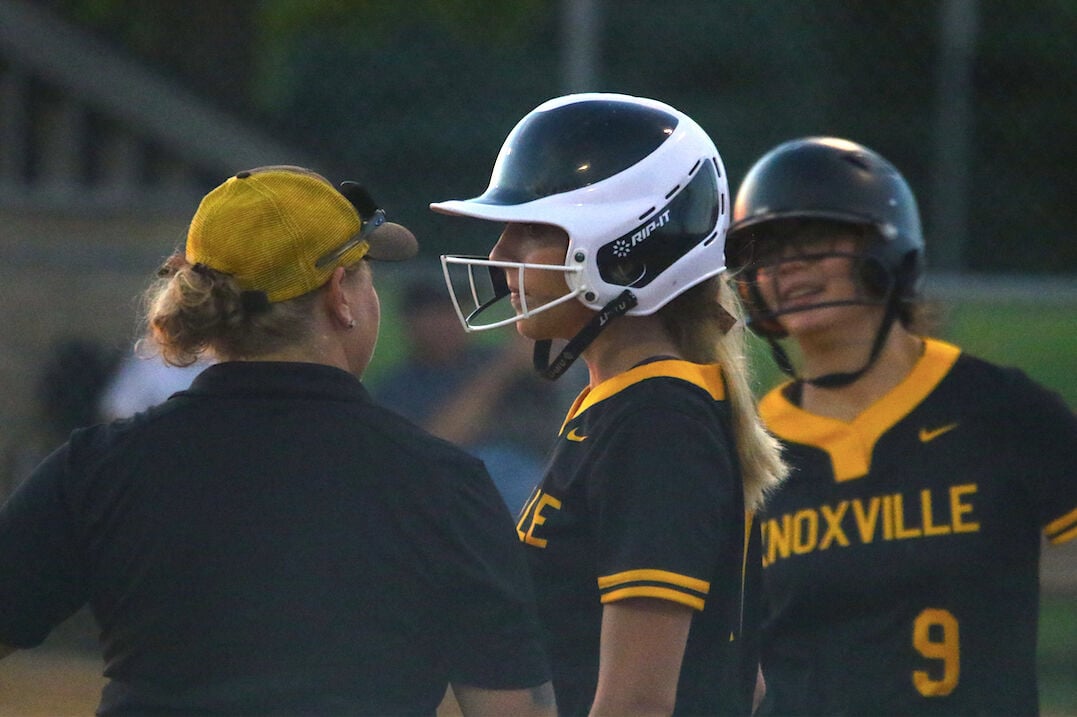 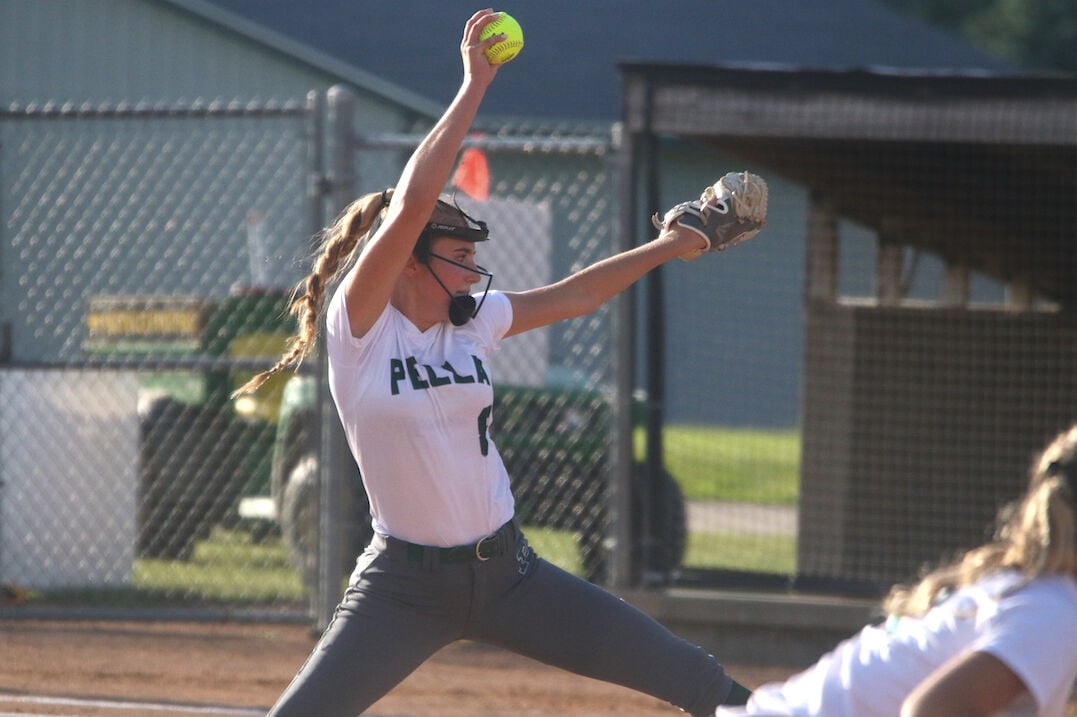 Knoxville's Kalli Wilson is hoisted up by her teammates after her walk-off hit against Pella.

KNOXVILLE — Their regular season matchup was a race to 10 runs. Their postseason matchup was a complete 180 as it was Kalli Wilson’s walk-off RBI single in the eighth inning that was the only run of the game in Knoxville’s 1-0 victory over Pella in the regional quarterfinals.

Both teams had prime opportunities to get on the board early but it was the pitchers and the defense holding the score at zero.

Freshman Ashlyn Finarty got the start for Knoxville in the circle while sophomore Ella Corbin got the nod for Pella.

Finarty would go five innings for the Panthers, giving up just three hits with five strikeouts. Jadyn Streigle replaced Finarty in the sixth inning and would retire all nine batters she faced.

Corbin battled through a lot of traffic on the bases and was able to hold Knoxville scoreless for 7 2/3 innings. She would allow just five hits with six walks and one strikeout.

In the first inning, Pella’s Kylie Tauke was able to advance to third with two outs but would be stranded there as Corbin would ground out to the pitcher.

In the bottom of the inning, Melanie Sullivan, who went 2-for-3 on the night with a walk, would be thrown out at home on a fielder’s choice. The Panthers still had runners on first and second with one out before Pella would escape any damage.

Knoxville then stranded a runner on second in the second and a runner on third in the third to keep the game tied at zero.

The Lady Dutch had their best chance to score in the fourth inning with runners on the corners with two outs for Courtney Thompson, who led the team with 17 RBIs this season. Thompson would hit a high chopper over the pitcher but Panther shortstop Olivia Maasdam was able to field it cleanly and fire it over to first for the out.

Meanwhile, the Knoxville offense continued to the threaten. They would leave the bases loaded in the fourth inning and Pella third baseman Brynnlin Kroymann was able to turn a nice double play by stepping on the bag and throwing to first to end the fifth inning.

Knoxville had another runner on third in the seventh inning as they were looking to walk it off with one of their best hitters, Maddy Findley, at the plate. Findley would pop one up to shallow right field and Pella second baseman Kiki Riggen was able to track it down, narrowly avoiding a collision with right fielder Thea Wisse on the play.

The game would go to extras where Streigle would retire Pella in order to quickly send it to the bottom of the eighth.

Knoxville head coach Carla Smith was looking for a spark so she deployed pinch hitters in the first two at bats of the inning as Corbin was able to get both of them out.

Freshman Elaina Hamilton, who was making her first start of the season, came up huge with her second hit of the season after getting her first hit in her first at-bat of the game. It was a blooper to right field where a charging Wisse would just miss a diving attempt. Hamilton would try to advance to second as the throw would overshoot into left field, allowing Hamilton to race to third and get into prime scoring position with two outs.

Smith once again went back to her bench as she would call on freshman Kalli Wilson to pinch hit.

Wilson, who only had three hits on the season, laced one down the line in right field as Hamilton would jog home and Wilson would earn the walk-off RBI single for Knoxville.

Her teammates poured out of the dugout to mob her and hoist her up as the hero of the game.

While one team celebrated, the other had to walk back in defeat after a hard-fought game. The young Lady Dutch didn’t make it easy for the Panthers but they ultimately saw their season come to an end.

The girls and the coaches gave hugs to Thompson, the lone senior, as she played her final high school game. The last person to exchange a heartfelt hug with the five-year letterwinner on the field was her mom, the head coach, Teresa Thompson.

The Lady Dutch finish the season with a record of 3-16. They will lose their lone senior in Courtney Thompson but are set to return everyone else.