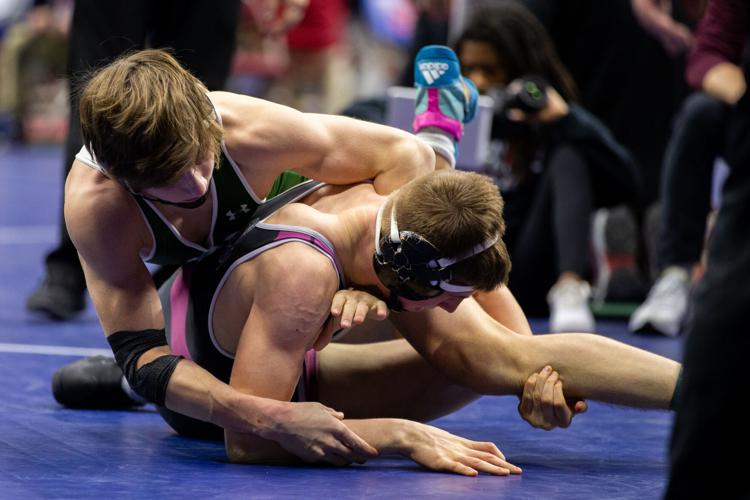 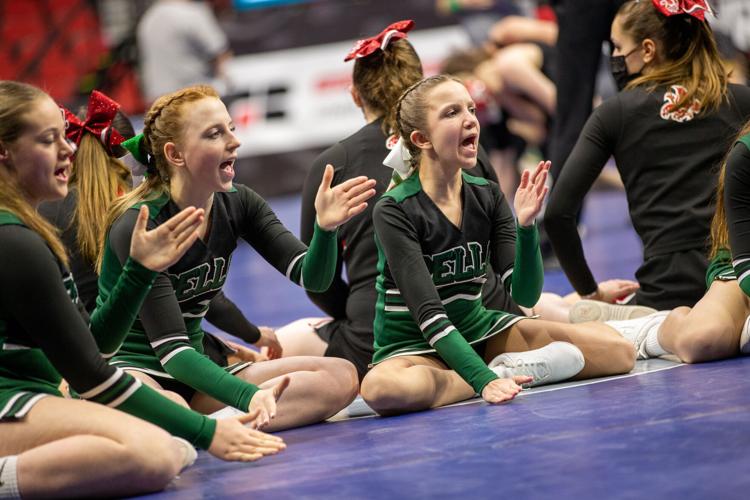 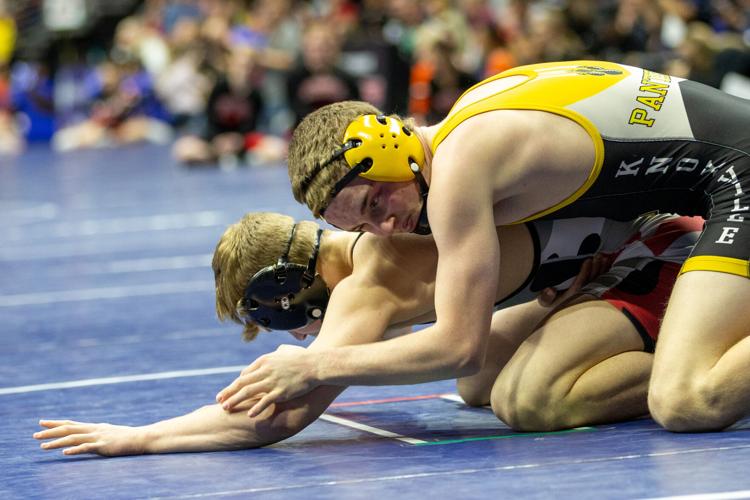 DES MOINES — The Well was packed and wrestlers took to the mats for the opening day of the 2022 State Wrestling Tournament on Thursday. Three of the four area boys were able to bounce back from early losses to pick up a consolation win and advance to Friday morning.

No. 11 Jackson Van Kley (34-14) of Pella started his day with a tough match against No. 6 Cayden Langreck (15-1) of Waverly-Shell Rock. The match started with boys guys scrambling for position to get a takedown with Langreck eventually gaining the takedown and ride out to go up 2-0. Van Kley started the second period on top but would get reversed and turned for the pin, falling to the consolation side of the bracket.

Van Kley would need a win against No. 14 Max Dirks (15-18) of Dowling Catholic and he would get that and more. He got off to a good start with an early takedown before going to work an getting a late two-point near fall just before the end of the first period. Van Kley would then get another takedown in the second period but this time he would catch Dirks in a bad spot and jump on top to secure the pin and a spot in day two on Friday in the consolation rounds.

In the morning session, Knoxville started out with all three wrestlers being on the wrong end of their results.

No. 14 Marco Alejo (33-8) took on No. 3 Gavin Jensen (52-1) of Williamsburg in his opening match at 113 pounds. The two would clinch most of the first period before Jensen would take down Alejo and apply pressure before turning him late for the pin just before the first period buzzer.

At 132 pounds, No. 10 Luke Spaur (45-2) was set to take on No. 7 Tyce Ruffridge (37-5) of Pocahontas Area. Ruffridge struck first with a single leg takedown late in the first period to jump in front 2-0. Spaur would start the second on top and allow a Ruffridge escape to make it a 3-0 deficit heading to the third. The two would start the final period neutral and Ruffridge would hold off several Spaur shots down the stretch to close out the 3-0 decision.

Finally at 182 pounds, Knoxville’s No. 16 Wayne Johnston (27-24) would have to face off against No. 1 CJ Walrath (52-0) of Notre Dame, Burlington to open his state tournament. Walrath would get an early takedown before the two would go out of bounds to force a restart. Walrath would catch Johnston on the restart and flip him for the pin.

All three Panthers would need a win in their next match to advance to Friday or they would see their tournament run end.

Alejo bounced back nicely in his next match against No. 6 Levi Kramer (34-9) of CLGLR. After exchanging a takedown and reversal to leave the first period tied at two, Alejo got his offense going with a nice reversal into a cradle to get a three-point near fall with the ending just in time to save Kramer from a pin but would find him trailing 7-2. Both would then exchange reversal in the final period with Alejo adding a two-point near fall to boot to cap off the 14-4 major decision to send him to day two.

Spaur would take on No. 15 Easton O’Brien (41-19) of Atlantic in his second match of the morning as a takedown and tight cradle quickly put Spaur in front 5-0. But O’Brien would come up big late in the period with an escape leading to a takedown and near fall of his own to tie things up at 5-5 after one. Spaur then started the second on top and would give up an escape before getting a nice takedown to lead 7-6 heading to the third. Spuar started down and a O’Brien penalty increased the Spaur lead before O’Brien would let him up late to secure a 9-6 win for the Knoxville 132 pounder and securing a spot for Friday.

Johnston would try to keep the momentum going against No. 9 Blake Jager (30-9) of EBF but would not be able to as Jager got a single leg and turned Johnston to finish off the first period pin to finish off Johnston. The sophomore ends his season with a 27-24 record.

Van Kley along with Alejo and Spaur will compete in the Class 2A and 3A quarterfinals set to start on Friday at 9 a.m. at Wells Fargo Arena in Des Moines.