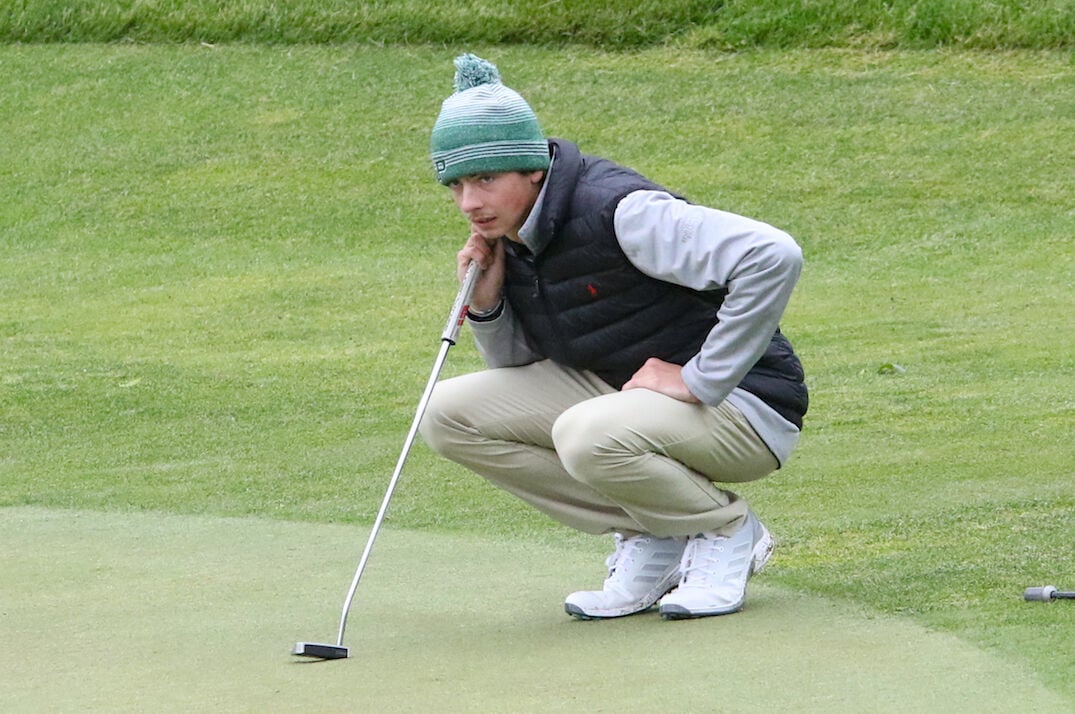 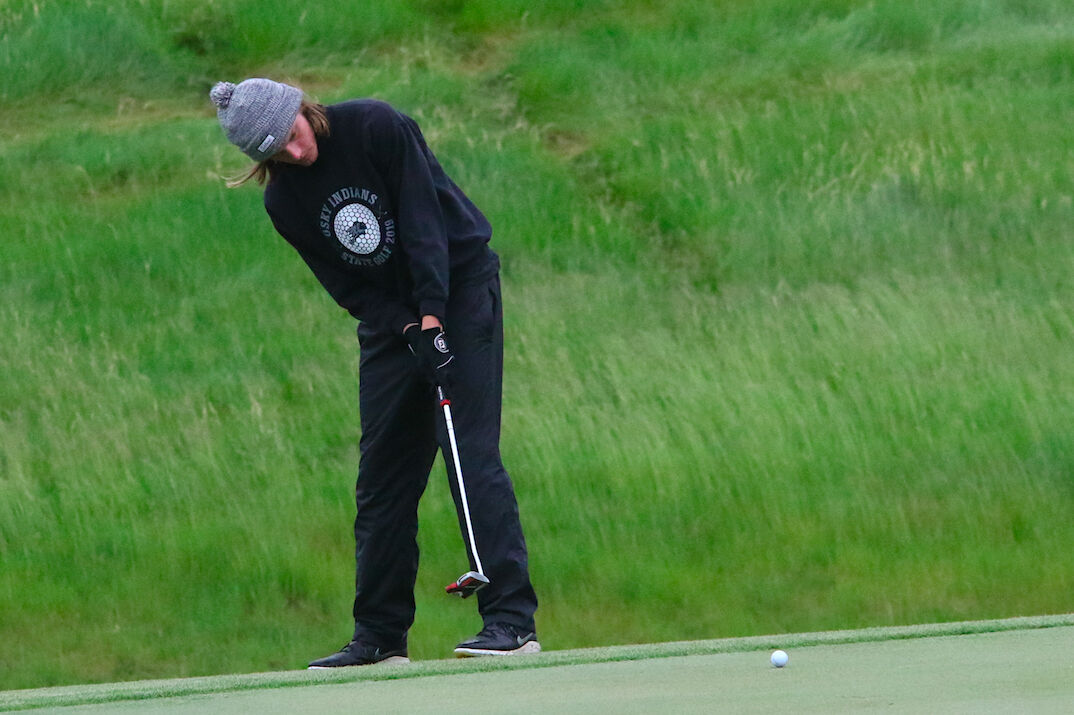 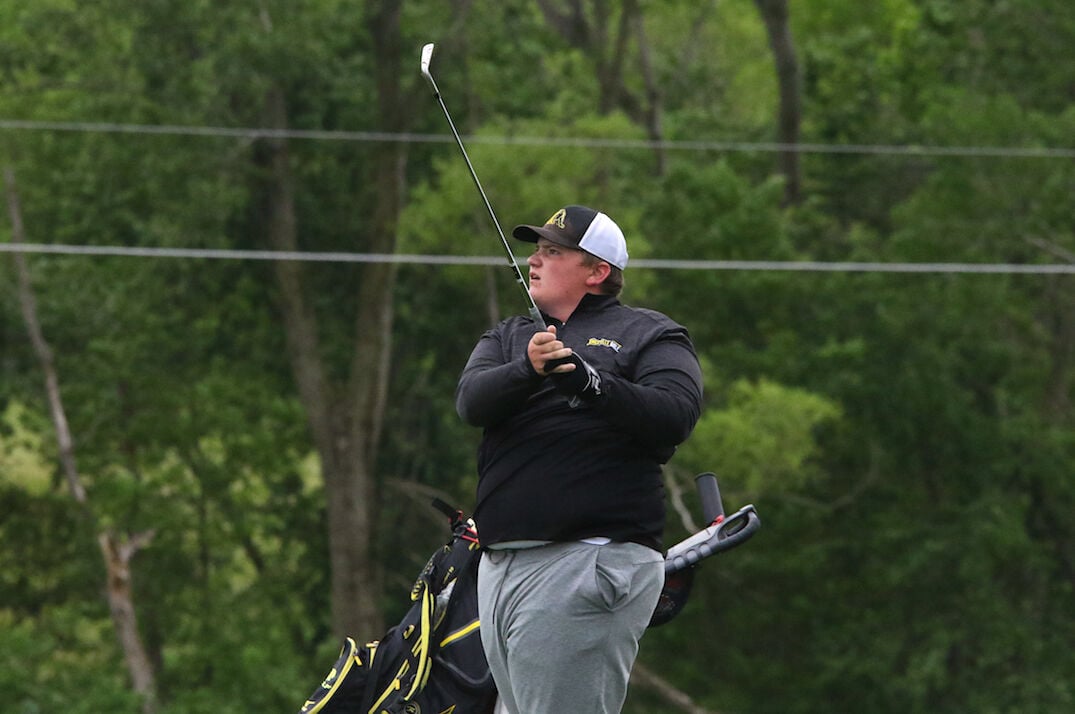 MARSHALLTOWN — Weather was less than ideal for the two-day Class 3A Boys State Golf Tournament at Elmwood Country Club in Marshalltown but the boys prevailed and made some big shots on the biggest stage. In the end it was Pella’s Will Simpson leaving with a seventh place medal around his neck and Oskaloosa and Knoxville finishing up great seasons.

Simpson was in the hunt after day one and knew it would be a couple of tough rounds with cold, wet and windy conditions on both days forcing players to adjust on the run.

“Yesterday we had to make a lot adjustments just because it was really wet greens. The course was in great shape even though we got rain most of the day. Today it was really windy so you really had to do a lot of different shots with the ball and be able to work in different ways.”

Simpson played the back nine better than the front on both days and that was certainly the case on Friday. After bogeys in three of his last four holes, Simpson missed a long birdie put on the tough ninth-hole green to set up a tricky par putt with over three feet of left to right break. Simpson would find a way to curl it in for his par and propel him to a strong back nine.

“I really had a pretty poor first putt,” said Simpson. “But I had a good comebacker there so that felt really good and it just kept me in round.”

Simpson rallied to cash in one birdie against just one bogey for an even-par back nine finish and an overall round of 76, two shots better than his day one 78. His +14 total was good enough for seventh place, one shot back of sixth, two shots back of fourth and nine shots back of the champion Hogan Hansen of Waverly-Shell Rock.

“It was a really good experience,” Simpson said. “It really sucked to miss last year and it was a really tough two days but I was happy with the top seven finish and the medal.”

Simpson had a good posse following him for both days as Pella missed out qualifying as a team by one stroke. But getting to see their teammate compete against some of the best has got them already thinking about next season.

“It's really exciting,” Simpson said. “We had a couple of guys come up and watch and that got their blood boiling to be like ‘alright, let's get up here next year.’ So that's exciting for them and we'll see what happens next year.”

Oskaloosa would finish ninth place as a team but they saw good improvement on day two as five of the six players bettered their day one score and overall the team improved their score by 12 strokes.

“They finished in ninth place in the entire state and should be really proud of themselves for everything they accomplished,” Oskaloosa head coach Bret Foster said. “It’s really too bad the weather put a damper on the experience but it was still really special for the guys.”

Carter Parks led the way by finishing off his third state tournament appearance with a good round of 83 to improve on his day one score of 91. He would finish +34 to take 28th as an individual.

“Both were excellent leaders helping the younger guys to experience the State Tournament,” Foster said. “It was an honor to watch them grow as golfers and young men. This was a fun year, the seniors will be missed, but the future should be bright.”

Knoxville finished in sixth place at +132 as Gilbert won the team title at +67.

The Panthers nearly had themselves a medalist as freshman Evan Smith finished +16 in the tournament, two shots off from a medal and eighth overall cap off a fantastic first varsity season.

Carson Uitermarkt (+35) had a good tournament with Karl Arkema (+40) and Beau Leisure (+44) both showing flashes and Jace Nichols (+58) and Mason Hatch (+76) rounded out the lineup for the Panthers.