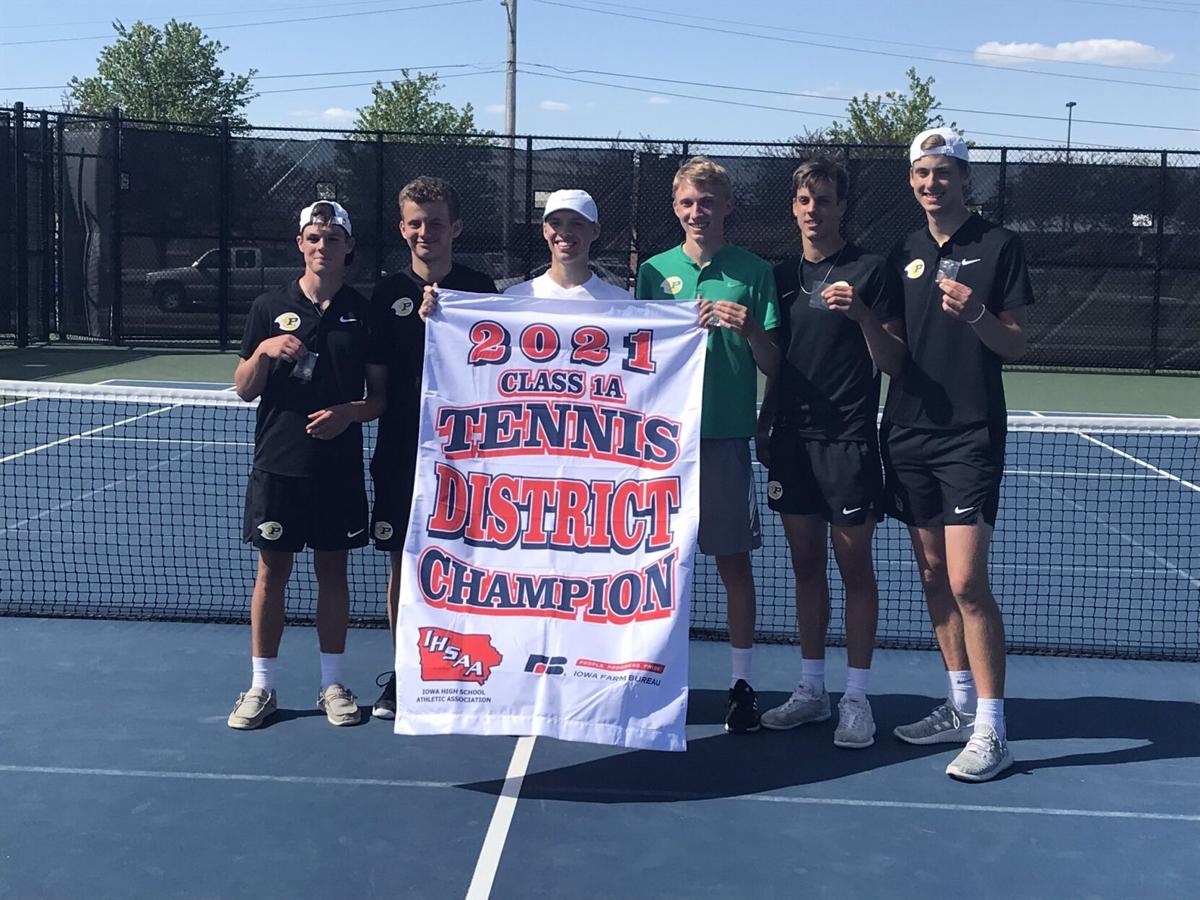 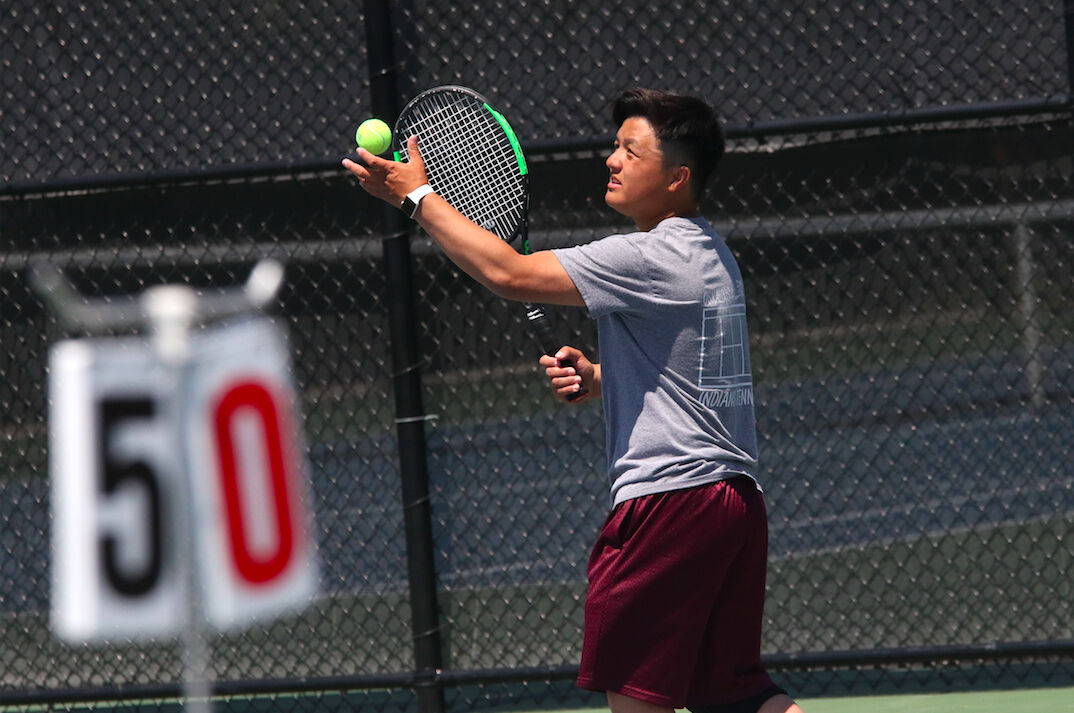 PELLA — A perfect day for tennis in Knoxville saw some quality tennis being played which resulted in Pella earning a district title and qualifying four individuals for state while Oskaloosa earned themselves a pre-substate duel with a third place finish.

“We feel super great,” Pella head coach Josiah Brandt said. “We were five or six points away from sending six and we’re super happy about how all the matches went. I think at the end of the day, everyone can say, we played our best, we prepared our best.”

All four of those Pella qualifiers dominated the day. In singles play, Lucas Heap and Caleb Briggs earned the top two seeds and played like it on their way to qualifying for state.

Heap rolled with three total wins getting him to the finals after outscoring his opponents 36-3 along the way. Briggs saw similar success in his three wins, going 36-5 to meet his teammate in the title match. In the end it was Heap earning the 6-2, 6-1 win over Briggs to earn bragging rights as district champion. Heap has had a steady climb of improvement as the year has gone on and he looks to be playing his best tennis at the right time.

“I'm sure my consistency got much better,” Heap said. “I think I had good shots at beginning of the season but I missed a lot. My consistency has gotten better and my game at the net has got way better. Having inner-competition and practicing every day with some of the best players in the state with some of the best coaches in the states have certainly helped a lot.”

Now Heap will have a chance to face some of the best players from around the state at the individual tournament but he still has his eyes set on the top.

“Certainly team state is our main priority,” Heap said. “Winning team state we’ll have some big competition with Xavier. Individual state there are some very good people, Cameron Luhring is the guy to be beat and I'm coming for him.”

That last shoutout got a good laugh from his teammates as Luhring is widely regarded as the top player in the state. The Aplington Parkersburg product is rated as a four-star recruit by tennisrecruiting.net and is the top player in Iowa. The Nebraska-Omaha commit has enjoyed unbelievable success this season as Varsity Bound lists him at 9-0 in singles play and with a perfect game record of 96-0. Heap will hope to get a chance to play Luhring on the biggest stage.

In doubles play, Jack Edwards and Vaughn Thompson continued their great play. The top-seeded Dutch duo didn’t surrender a game until the finals where they defeated Grinnell’s AJ Wilkins and Calvin Jaworski 6-2, 6-0.

Edwards and Thompson both make it back to state after making good runs in 2019 but this will be their first time competing there as a doubles team.

“It's one of the best feelings in the world, honestly, to get back and be able to have a shot at the state championship again,” Edwards said. “I think we have a very good shot of winning the entire thing. It's a really comforting feeling to know we're there and that we just have to keep practicing.”

The talented duo, who also usually serve as the No. 1 and No. 2 singles for Pella, decided to compete for a chance at state as a doubles team instead of both getting a shot at a deep run in singles.

“Jack and I have been playing together for a long time,” Thompson said. “So for us we've been playing doubles together over the winter and just in years past. We've kind of grown used to each other and each other's play styles and stuff. This year especially we've hit doubles really hard and we've grown a lot as a doubles team.”

Hoping to join them in the finals was Pella’s No. 2 doubles team of Adam Schreur and Jack Briggs. The energetic duo picked up wins of 6-0, 6-0 and 6-2, 6-0 on their way to a huge semifinal showdown with Grinnell’s Wilkins and Jaworski.

This one was every bit of a back and forth with a lot of energy and big plays. Schreur and Briggs were able to win a tight first set 7-6 (4) before Grinnell answered with a hard-fought 6-4 second set win to force a third set. The final set saw both teams gain leads but it was Grinnell in the end securing a spot at state with a 6-4 win.

Schreur and Briggs bounced back in the third place match to win 6-1, 6-3.

For Pella, it was another statement day as they look to leave their mark in the coming weeks of postseason play.

“We’re trying to make a name for ourselves,” Edwards said. “Pella hasn't really been in the state championship, two years ago was the first time. We're just trying to really put our names on the board to make Pella tennis an actual threat that people don't want to play or afraid to play.”

“And we have a really great coaching staff too,” Thompson added. “We have a lot of good players obviously as we've been able to thankfully show today. But our coaching is really great too. They've helped push us a long ways. I know especially for me in doubles and singles, I've been pushed a lot by by Mr. Brandt and Mr. Van Gorp and we're really thankful for the work that they've been putting into our team. They’ve done a lot for us and sacrificed a lot of their time so we're really thankful for the stuff they're doing for us here.”

Oskaloosa had a great day on the courts on their way to a third place finish.

In singles play, Khydyn Yang grabbed wins of 6-1, 6-0 and 6-1, 6-0 on his way to the semifinals where he would fall to Heap. Yang would then fall in the third place match to take fourth but his head coach thinks he’s playing his best tennis at the right time.

“The kids just finished in last place for the conference tournament on Monday and then to turn around and play their best tennis of the season on Wednesday was awesome to watch,” Oskaloosa head coach Tony Witt said. “I am very proud of this accomplishment for the kids, they have been working really hard this whole season to get better and it showed and payed off for them on the courts today.”

Knoxville and Pella Christian were also in play on Wednesday as the Panthers finished just three points behind Oskaloosa for third.

Gabe Mathias had the best finish on the day for the Panthers as he went 3-1 on his way to third place in singles. His teammate, Andrew Orr, won his first match of the day 6-3, 6-2 but would fall in the quarterfinals.

In doubles, Nate Crane and Grant Liston won their first match 6-1, 6-2 before falling in the quarterfinals while Carter Short and Jaxson Zuck fell to the eventually champions in the first round.

Pella Christian fell in the first round of all four of their matches to finish off their first season back on the court.

Pella will get some time off before substate team play next Saturday, May 22 while Oskaloosa (1-8) will host Grinnell (5-4) in a pre-substate matchup on Saturday at 10 a.m.