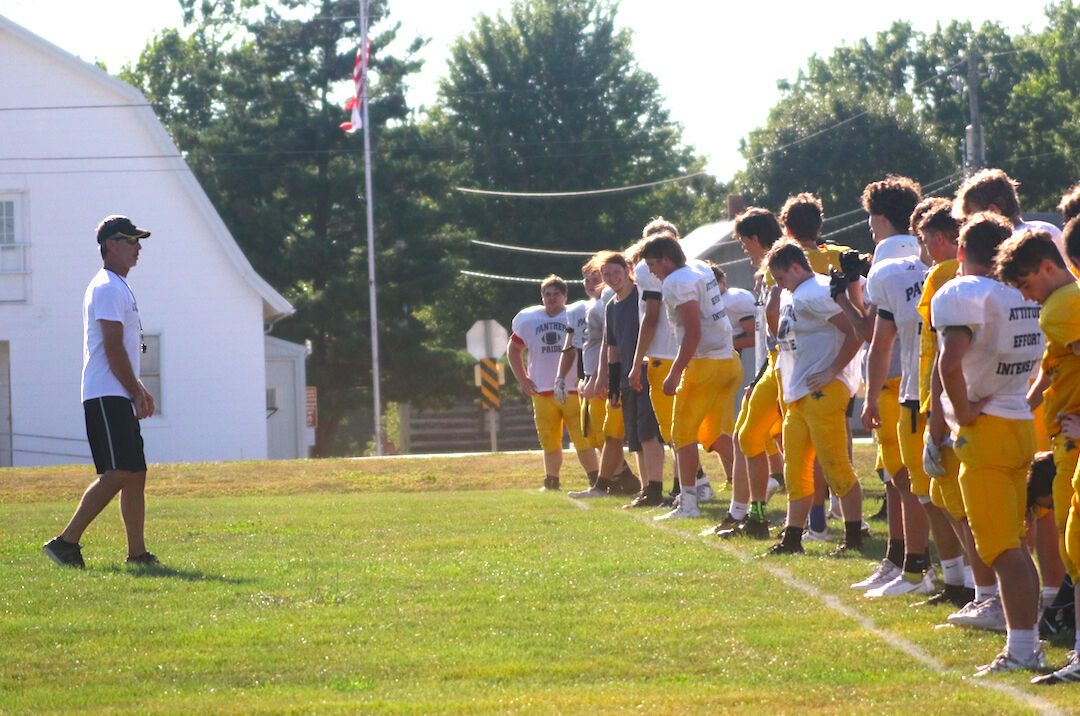 Knoxville head coach Eric Kellar (left) has the team line up for conditioning. 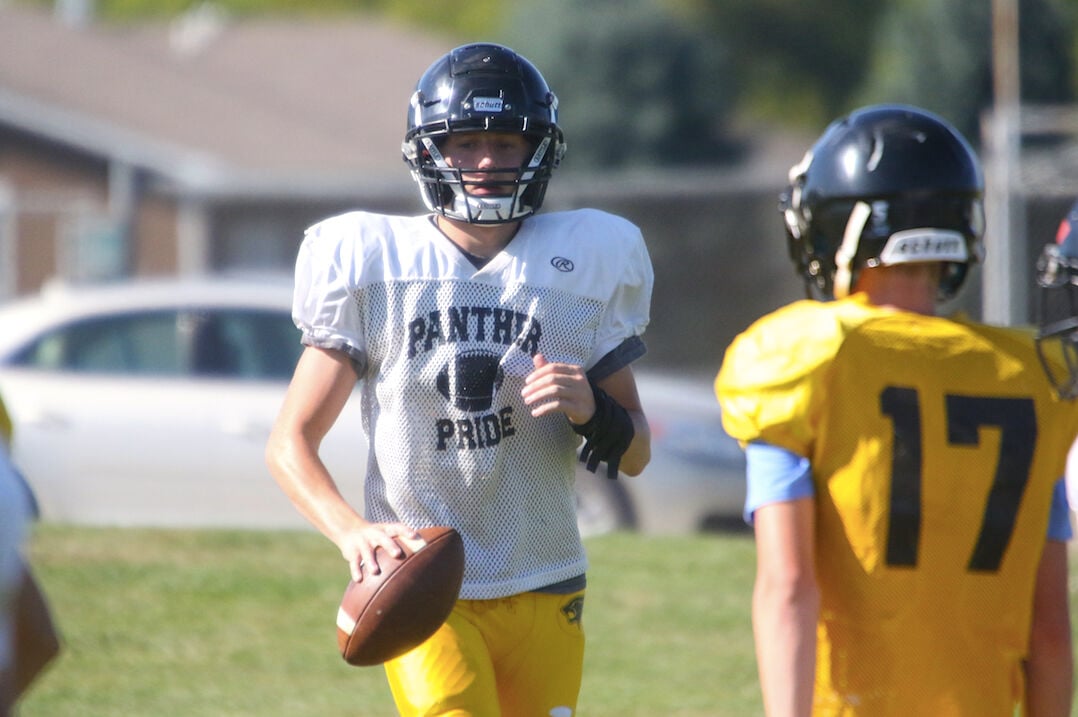 Knoxville's Kieran Nichols (center) is recovering from a broken wrist. 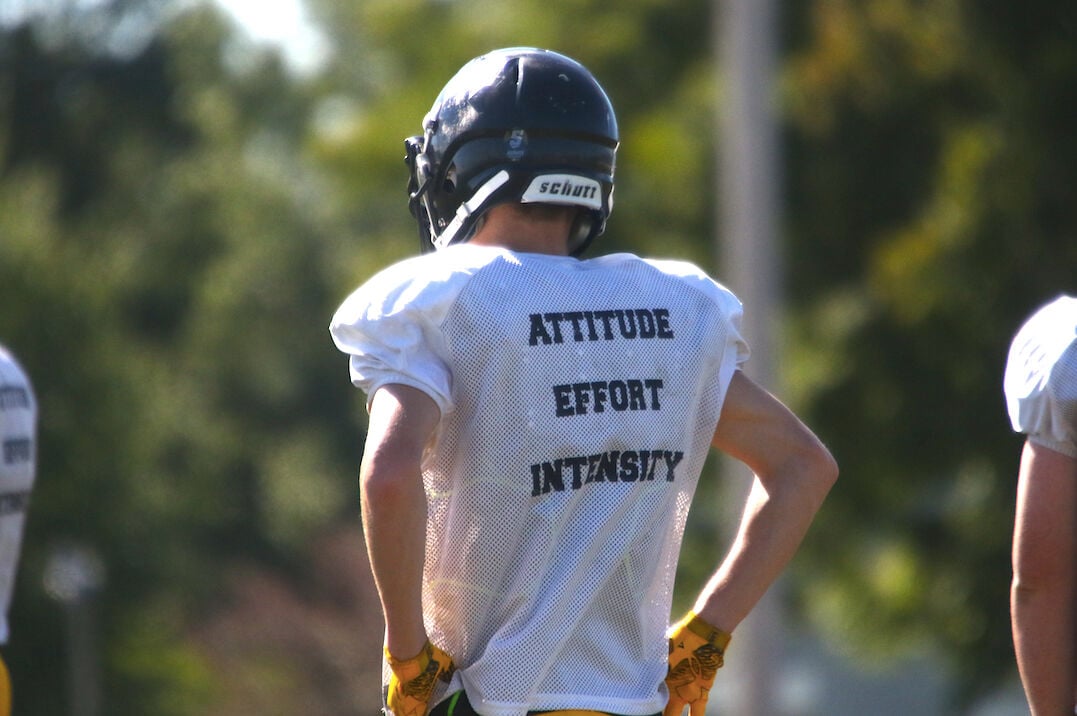 Attitude, Effort and Intensity label the back of Knoxville's practice jerseys.

Knoxville head coach Eric Kellar (left) has the team line up for conditioning.

Knoxville's Kieran Nichols (center) is recovering from a broken wrist.

Attitude, Effort and Intensity label the back of Knoxville's practice jerseys.

KNOXVILLE — The Panthers’ six wins last year were their most since 2005. They will look to build off that successful season with many returning pieces from that team.

Nichols returns at quarterback after passing for 539 yards with four touchdowns against five interceptions. He also ran for 670 yards and eight touchdowns. Knoxville may be without Nichols for week one as he is recovering from a broken wrist and is questionable for their game against Fairfield.

Hudson should be Nichols top target once again this year after catching 23 passes for 273 yards and three touchdowns last year.

On the other side of the ball, having all-state safety Cox back should provide a boost for the defense after he broke a school record this season with eight interceptions to finish second in Class 3A along with 13.5 tackles. He also showed his prowess on special teams and offense. He served as the team’s kick and punt returner, rushed for 318 yards and three touchdowns and caught seven passes for 118 yards and one touchdown.

Having the likes of experienced players like Nichols, Hudson and Cox back has helped the Panthers during camp.

“Kieren is helping our freshmen get up to speed. Keagan was the captain of our defense last year and making all the calls and Mike has been helping all the new guys with our route concepts,” Knoxville head coach Eric Keller said. “Anytime you get a senior who is a good leader and has had a big role the year before as a junior is just a huge plus.”

Despite those returning, Knoxville does have a couple of big shoes to fill on both sides of the ball. Leading rushing Carter Bailey graduated and a run-heavy team like the Panthers will need to find a new running threat.

“I think Brady Pearson is going to do a great job at fullback. Two years ago he showed us some good things and didn’t get as many reps last year because of Carter but he’s put on some weight and is still quick. We have a couple of other guys that might back him up.”

The graduation of all-state linebacker Ben Olson will also hurt this team as it’s hard to replace that kind of production where he tallied 75.5 tackles, 5 sacks and 14 tackles for loss.

“It’s hard to replace Ben,” Kellar said. “He was 100% all go all the time but Logan Clark played there last year and he’s got the same motor. He’s put on some weight too so you got a 210-pound linebacker that can move like a running back which helps. Brady [Pearson] is back at linebacker, we moved him back inside. We’re trying out some guys for our middle backer but again those guys have some experience so as long as we stay healthy I think we’ll be okay.”

Kellar said fellow seniors Kyler Reidel, Isaac Schmidt, Andrew Orr, Rylan Mulder, Cael Peterson, Vlad Gorskikh and Kadeyn Leslie will all need to step up this season as they only have five juniors only a handful of sophomores and freshmen vying to try to give Knoxville some depth, an area that could cause for some concern if injuries pop up.

“You’re always worried if somebody goes down, who’s going to come in,” Kellar said. “Some kids that haven’t played ever and some kids that maybe haven’t played since junior high are picking some things up so I feel a little bit better at corner and at running back with a couple of sophomores stepping up. We’re not too far down that we’re in big trouble but hopefully if somebody has to come out for whatever reason, we can sub them out with some confidence.”

As for the changes due to COVID-19, Knoxville is taking them in stride. They keep drills under 15 minutes and spread out their warmup lines, conditioning lines and locker room. They aren’t doing showers and they have the kids leave their stuff in their locker so they can spray it.

The change from the 16-team playoff to every team qualifies has been a welcome change for Kellar.

“I like it,” Kellar said of the change that every team makes the playoffs. “I mean every year you have a team that’s hurt at the beginning of the year and they get healthy and they’re coming on or maybe it’s the other way around and they’re dominate but they get injured at the end. Or maybe even COVID and you get some teams that have some chances so I like it and I hope it stays around.”

The schedule looks tough for Knoxville but they hope to get off to a good start and go from there.

“We have to win game one and give us some confidence going into week two against Keokuk and then staying healthy,” Kellar said. “Those are the biggest keys for us where we can compete with everybody.”

Class 3A District 7 at a glance

Outlook — Last year’s team was full of juniors and sophomores. Well those boys are back and looking to improve on last year’s 5-4 record. An improvement in the passing game could be huge for them.

Outlook — Should have another strong team that can compete with anybody. They return their QB and two all-state players (one on each side of the ball).

Outlook — Lookout for their playmakers. They have some big, strong athletes that are hungry to continue the success they built last season.

Outlook — Year two under TeBrink sees the Comets lose their leading rusher but return their QB and leading receiver. Defense took a hit and will have to replace some guys there.