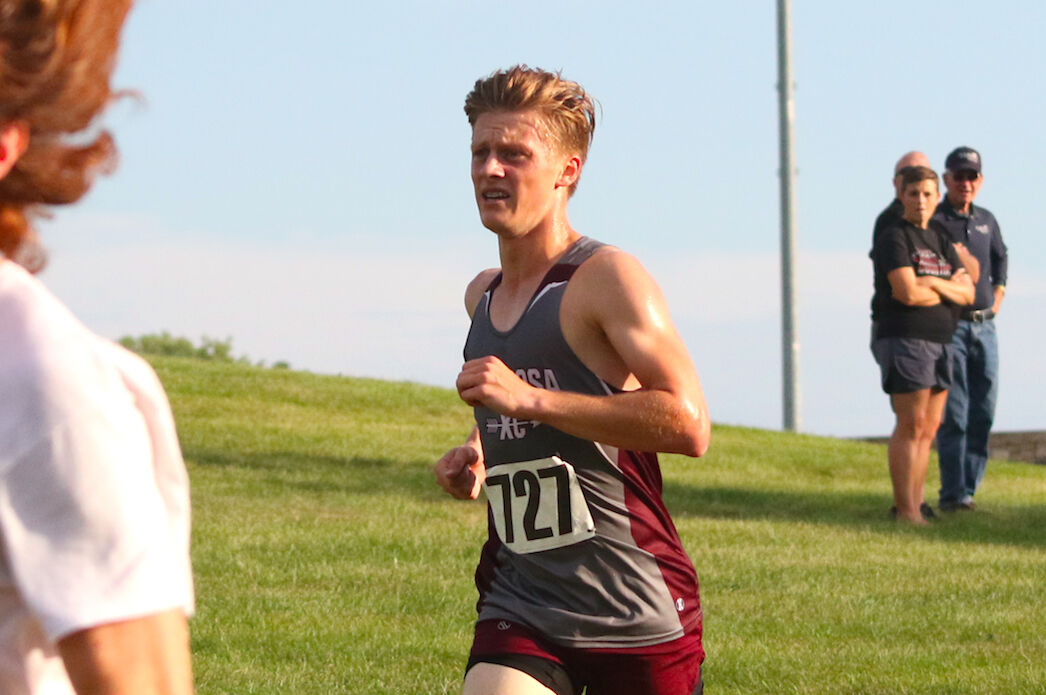 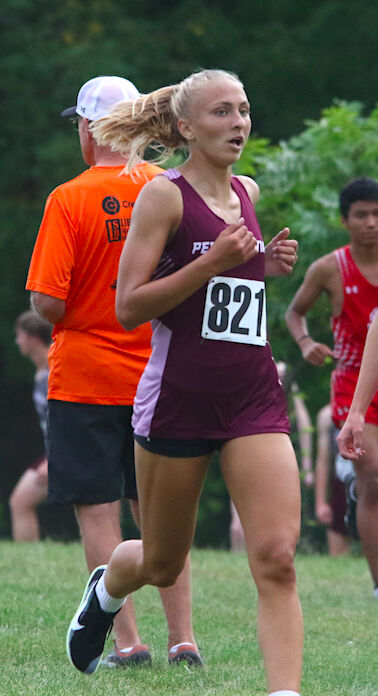 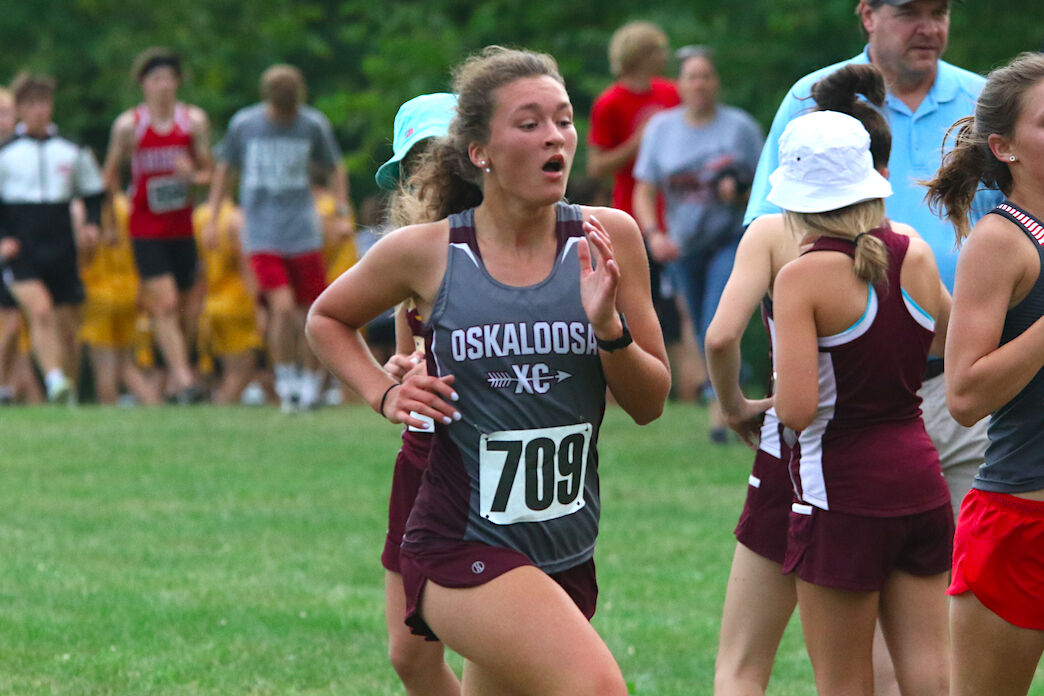 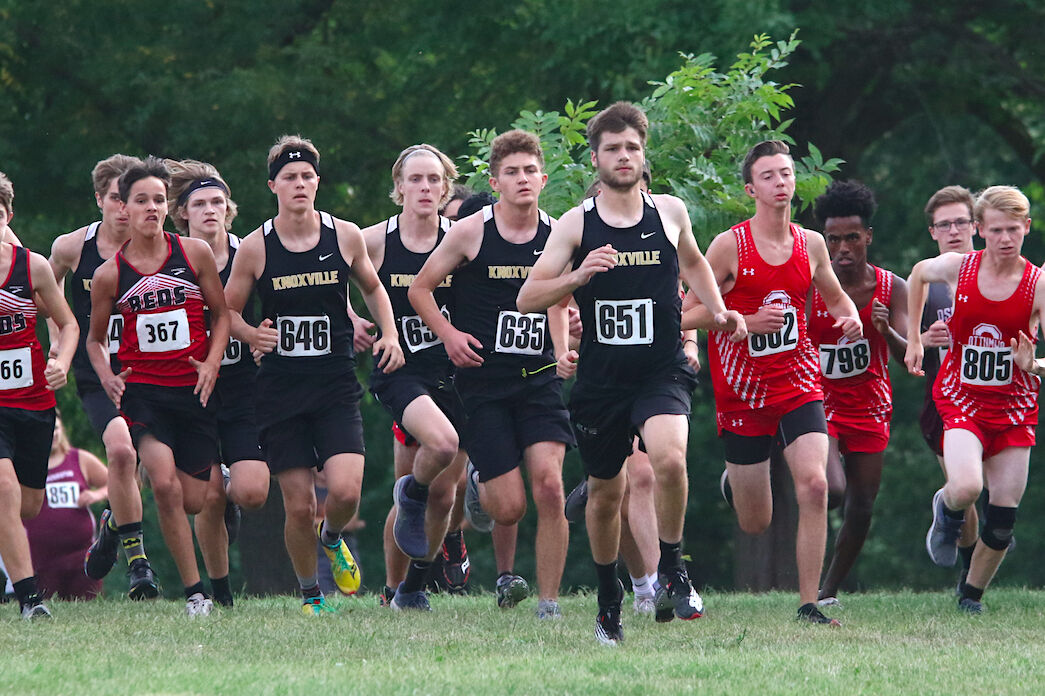 Knoxville's Seth Walraven (651) leads the Panthers off the start

Knoxville's Seth Walraven (651) leads the Panthers off the start

OSKALOOSA — It was a beautiful night for running at Edmundson Park on Tuesday as Oskaloosa held their home invitational with Pella Christian and Knoxville also in attendance.

On the girls side, Oskaloosa took seventh with 155 points, Knoxville grabbed 10th with 266 points and Pella Christian only had four runners so they didn’t score as a team.

"The girls team has been battling some injuries, but I thought they competed well,” Oskaloosa head coach Michael Comfort said. “Sage Adam ran the best race of her career. She is looking as strong as I've seen her run and she keeps getting better and better. Olivia Stodghill ran the best race of her life. Her determination is a great example for our team. Evie Adam stepped up huge for us as well.”

Despite not scoring, the Pella Christian girls had a couple of impressive showings with Joslyn Terpstra leading the charge behind the 11th-ranked (1A) Rylee Dunkin of Twin Cedars. Terpstra charged to a second place finish with a time of 20:59 while Jaclyn Holmes also ran a solid race by taking sixth at 21:10.

The Knoxville girls were without Norah Pearson as she continues to rehab her knee injury. Natalie Collins would pace the Panthers by taking 39th with a 23:20, beating her season best by nearly a full minute while Faith Roozeboom was not far behind in 45th at 23:46, which was her PR.

For the boys, Oskaloosa would finish fourth as a team with 145 points with Pella Christian right behind them in fifth with 148 points while Knoxville took 10th with 196 points.

"Our focus tonight was just to compete really hard on our tough course,” Comfort said. “You can't get caught up on just running fast times every week - every team is focused on that. We wanted to go out on our course, be tough, compete hard, and finish as high as we could. The guys were able to edge out a few teams because of this attitude. Aden Scott stepped up huge for us tonight. He is one of the gutsiest runners I've coached and he helped pull the rest of the guys along. William Leonard had a nice bounce back race too. Patrick finished second, and while I know he is disappointed in this result, I know he will bounce back stronger.”

“Boys had a great pack running night following leader Seth Walraven,” Knoxville head coach Michael Splavec said. “The final six varsity runners were only separated by 20 seconds. Hopefully with a strong couple weeks of practice we can get that pack running some faster times and dropping into the 18 minute time frame before we go to conference and state qualifying.”

Oskaloosa and Knoxville will be in action on Tuesday as they head to Mt. Pleasant while Pella Christian goes to Lynnville-Sully on Thursday.

Layla LeeAnn Walker the daughter of Anthony Walker and Erica Krile was stillborn at the University of Iowa Hospital in Iowa City. Her family includes her parents Anthony and Erica of Oskaloosa; two big brothers, Caleb James Krile and Blake Howard Walker both of Oskaloosa; her great grandmoth…

Joan Ruth (Geurts) Thompson, passed away at the Wesley Acres Health Center in Des Moines Iowa on September 8, 2021, at the age of 86 years. Joan was born on January 14, 1935, to Floris W.A. and Sophia (Vos) Geurts. Joan graduated from Pella High School with the class of 1953 and resided in D…