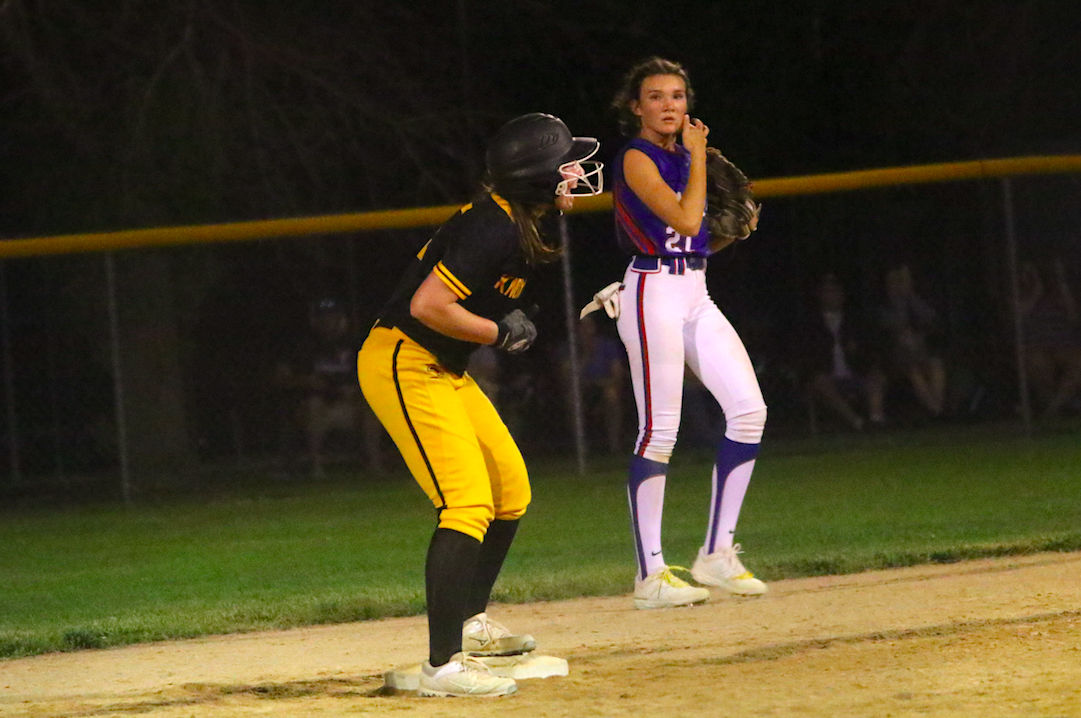 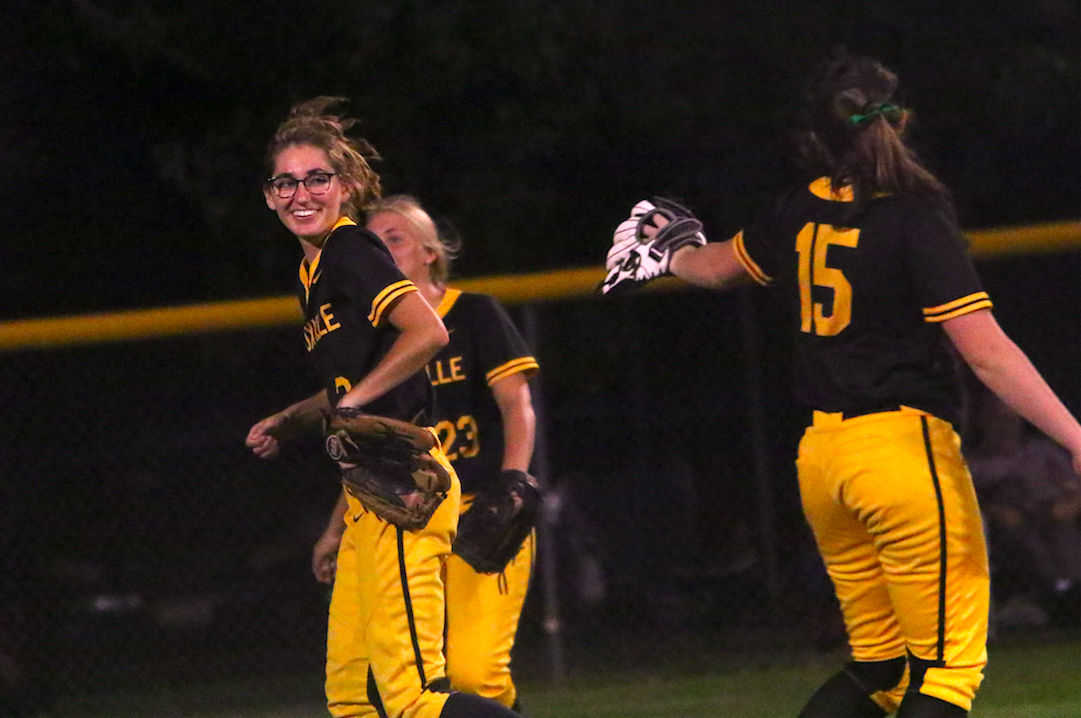 Knoxville's Charlie VerMeer (left) gets some love from Emma Dunkin (right) after making a catch in center field. 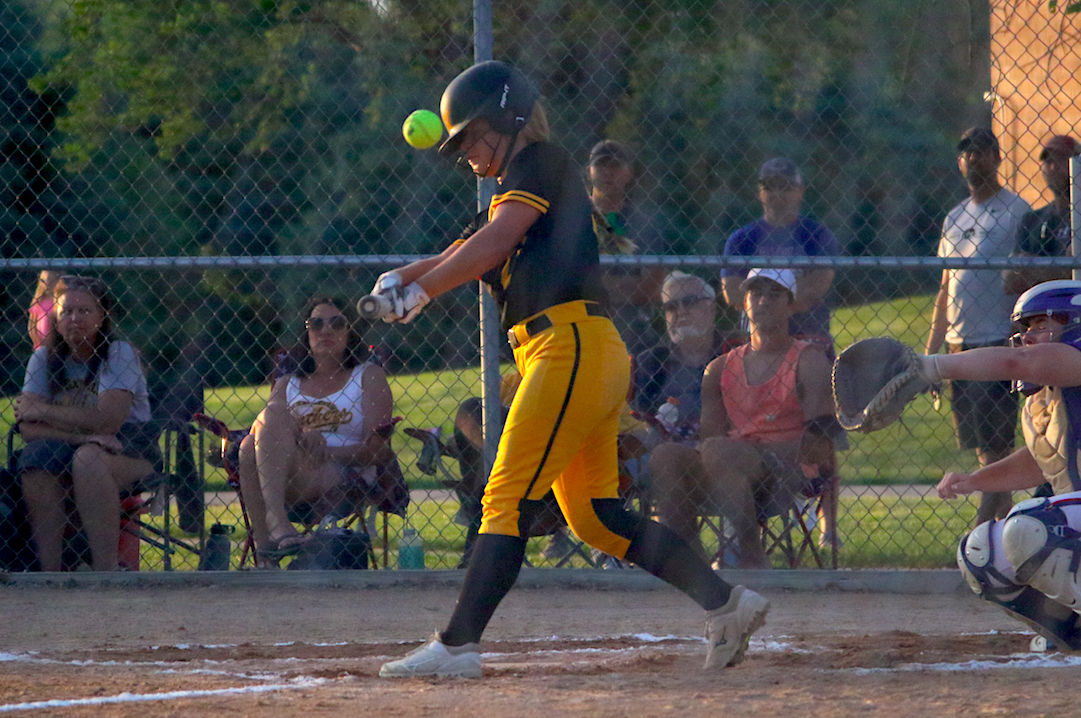 Knoxville's Melanie Sullivan fouls one off her helmet. 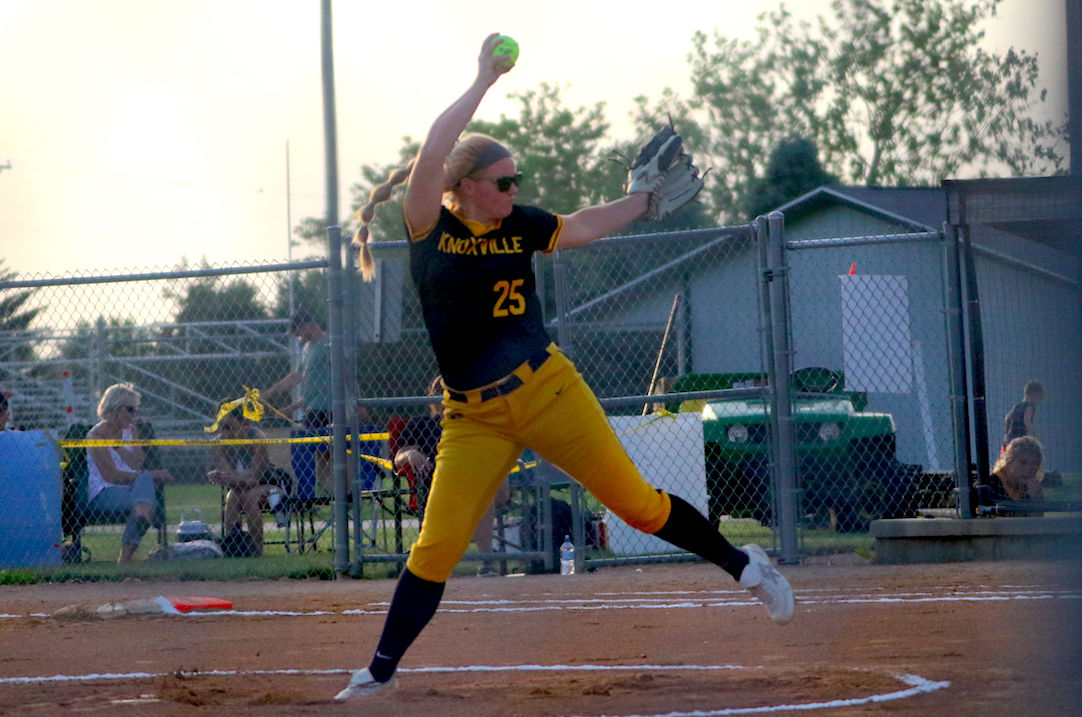 Knoxville's Charlie VerMeer (left) gets some love from Emma Dunkin (right) after making a catch in center field.

Knoxville's Melanie Sullivan fouls one off her helmet.

KNOXVILLE — Two undefeated South Central Conference teams clashed on Thursday night and it could’ve gone either way in a back and forth affair but would be No. 3 (3A) Albia coming out on top in eight innings over Knoxville 6-4.

The excitement started in the top of the first inning as Knoxville would throw out Albia’s Abbey Griffin at home plate but the Lady Dees would still get on the board on Jena Lawrence’s RBI ground out.

Albia’s second run came in the third inning as Alex Beard would turn on one and send a laser over the left field fence for a solo home run, putting the Lady Dees ahead 2-0.

The Panthers would get things going in the fourth inning as Knoxville would string together several excellent at-bats, driving up Lawrence’s pitch count and making her work hard against every batter.

Knoxville drew three straight walks to start the inning, loading the bases with no out for Ciara Heffron. The Panthers got back-to-back RBI singles by Heffron and Jadyn Streigle to tie the game at two with still no outs and the bases loaded.

Lawrence, a Creighton commit, would step up with a strikeout and a popup to the catcher to get to two outs before Albia’s shortstop would have a difficult time with Olivia Maasdam’s grounder, allowing the go-ahead run to score. Melanie Sullivan’s infield popup would end the inning and would hold a 3-2 lead after four innings.

Their lead was short lived as Albia quickly regained the lead in the top of the fifth inning. Griffin would quickly score after a leadoff double with Lawrence’s sacrifice fly later in the inning helping her own cause and giving the Lady Dees a 4-3 lead.

Knoxville continued to hit but it was just right at the Albia outfielders. Between the fifth and sixth innings, the Panthers had six straight fly outs, most of them hard hit but at the wrong place.

Knoxville was down to their last couple of outs in the seventh but were looking for another rally. After a leadoff ground out, Sullivan would single to put the tying run on base and the winning run at the plate with one out.

Emma Dunkin was up next and she would end up a few feet short of glory as she blasted one to deep right center field and off the fence as she ran into second fist pumping with a RBI double to tie the game, nearly winning it.

Lawrence would once again come up huge for the Lady Dees with the game in the balance, striking out the next two Panther batters to escape the inning and strand the winning run on second.

We went to extras as neither team was ready to suffer their first loss of the season.

But once again it was Albia wasting little time retaking the lead, Lauren Bayer knocked a leadoff home run over the left center fence with Griffin later adding a RBI single to her three-hit night to put the Lady Dees back in front 6-4.

Knoxville got the leadoff batter on with a walk but two strikeouts and a fly out to the catcher would end any hopes for another rally as the Panthers would suffer their first loss this year.

Lawrence would finish with seven strikeouts for Albia while Ashlyn Finarty got the start in the circle for Knoxville, giving up six runs on 11 hits with two walks and two strikeouts.