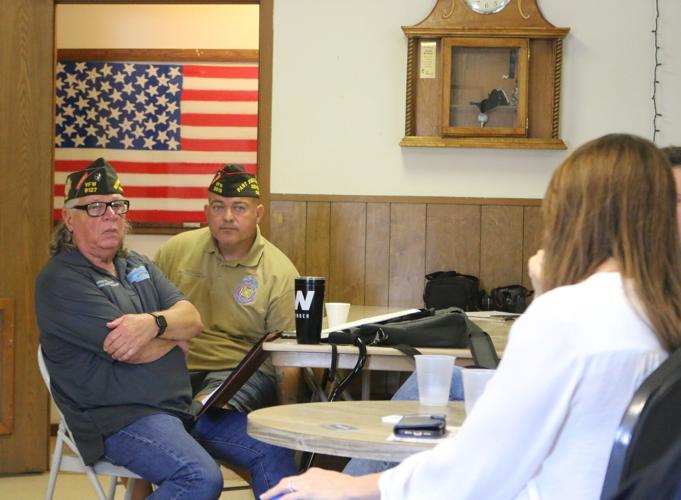 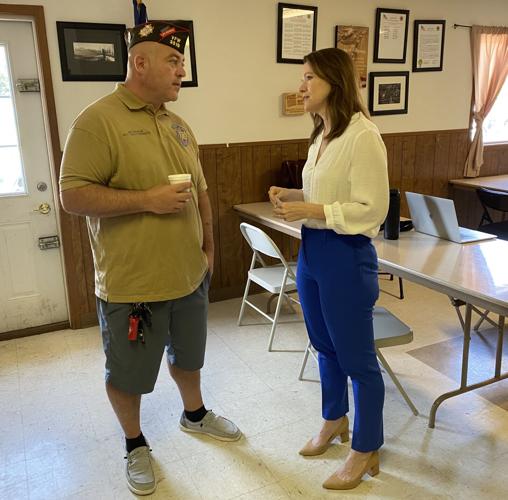 KNOXVILLE — Veterans of Foreign Wars Iowa State Commander Mike Braman served his country as a platoon sergeant in the U.S. Army for 19 years. While nearly two decades of service may seem like a lifetime for many, Braman wasn’t ready to retire.

Rather, Braman — like thousands of other veterans — was medically discharged for conditions he developed while serving in the Afghanistan War. Symptoms from asthma, chronic obstructive pulmonary disease, traumatic brain injury and post-traumatic stress disorder are maladies he endures daily.

As the country prepares for the upcoming general election in November, Braman and Knoxville VFW Post 3519, along with 6,000 local chapters, continue to make their legislative priorities known.

On Tuesday, Democratic candidates Christina Bohannan, Joe Kerner and John Norwood visited the Knoxville post to hear these legislative priorities — and what it’s currently like to be a veteran in the United States.

But, Brad Whitmore, Knoxville post quartermaster and national legislation manager for the state of Iowa, stressed veterans issues are not designated to one political party.

“Issues for veterans are not Republican or Democrat. They are American. We’re free because of the veterans who put their lives on the line, including female veterans,” Whitmore says.

“It amazes me that we advocate for what we call ‘veterans’ rights.’ Some people call it ‘benefits,’ and I’m not sure it’s really a benefit when you lose a part of your life,” Whitmore says. “And you want somebody to help you be taken care of. We’ve been an organization for over 100 years, and our purpose is strictly advocating for veterans issues.”

Two legislative bills — the PACT Act and the Major Richard Star Act — were specific points of discussion at the Knoxville VFW post Tuesday.

If passed by the House, the bipartisan PACT Act will give as many as 3.5 million veterans health care and compensation for illnesses caused by exposure to burn pits and other toxins. The bill adds 23 illnesses, including respiratory/lung diseases and certain cancers, and would support research into health effects caused by toxin exposure and improve VA health care and staff training.

“This goes all the way to Korea. Veterans in Korea were exposed to Agent Orange. The veterans in Vietnam were doused with it. Then we decided to start burn pits,” Whitmore says. “Whoever had the bright idea to pour diesel oil in a bucket and have somebody stand there and stir it up, is amazing.”

Braman’s asthma and COPD are a result of being exposed to burn pits in Afghanistan and Iraq.

“Will I have cancer later on? I don’t know,” Braman says. “God will take me when he does. But I expect the VA [United States Department of Veterans Affairs] should, and our government should, take care of me because they sent us into harm's way … Most times when Senators and our politicians don’t vote for a bill, they say ‘It’s too much money.’ Well, they didn’t think it was too much money when they sent us to war.

“We need to not think about the cost when it comes to taking care of our veterans.”

In March of this year, Miller-Meeks, a veteran, voted no on a previous version of the PACT Act that had passed the Senate but failed in the House. She issued the following statement in response to her “nay” vote:

“This week, the House could have taken this bill, passed it with a strong bipartisan vote, and sent it to President Biden’s desk to become law. Instead, we used valuable floor time debating and voting on a partisan bill that will not become law in its current form. Every day that we delay passing a bipartisan bill is another day our veterans are hurt.”

Miller-Meeks argued her case for voting no on the Senate floor the day before she cast her vote, citing cost as a factor. The bill is estimated to cost more than $300 billion in government spending over the next 10 years, according to the Congressional Budget Office.

“We are not doing right by our veterans by being fiscally irresponsible in their name,” she said. “And I say that as a veteran myself.”

The Major Richard Star Act, a bipartisan bill that was reintroduced this year, would give concurrent disability compensation and full retirement pay to veterans who served less than 20 years before medical retirement from combat-related injuries.

Currently, only veterans who have retired with at least 20 years of service and a disability rating of at least 50% can collect both benefits fully, according to the Wounded Warrior Project. The bill would expand both benefits to about 42,000 retired veterans who are currently ineligible.

The bill's namesake, Maj. Richard Star, was a veteran of the Afghanistan and Iraq War who served as a combat engineer. He was medically retired after an injury on duty and died from metastatic lung cancer after exposure to burn pits overseas in February, according to the Military Officers Association of America.

“This will allow veterans like myself to be able to draw your retirement you earned … I think I've earned some kind of retirement after 19 years,” Braman says. “You go to any other company in the United States, any public company, and you serve 19 years for that company, you’ve earned some kind of retirement. But you don’t get that in the army or the military, and that’s unjust in my eyes and the VFW’s eyes too …

“If you get injured on the job, you’d also get disability too,” Braman adds. “So there’s no reason why you can’t collect both. But the way our law is written right now, it’s called ‘double dipping’ from what we’re told … and that needs to change.”

When it comes to veteran legislation, the VFW does not support a bill unless it is bipartisan. To truly help veterans, Braman, Whitmore and thousands of others like them recognize and continue to urge politicians to work across party lines.

“I’m old enough to remember when the difference with the Democrats and Republicans was how to ‘get into the kitchen,’” Whitmore says. “My wife is always saying, ‘There’s more than one way into the kitchen.’ Everybody wants to get to the same spot, they just have different ideas of how to get there.

“Everybody became enemies. It was like ‘The Democrats are evil,’ and ‘No, the Republicans are evil.’ We have got to get away from that, because the evil is out there. And everybody has asked veterans to go out there and put their lives on the line … All we’re asking for is to be taken care of when we come home.”