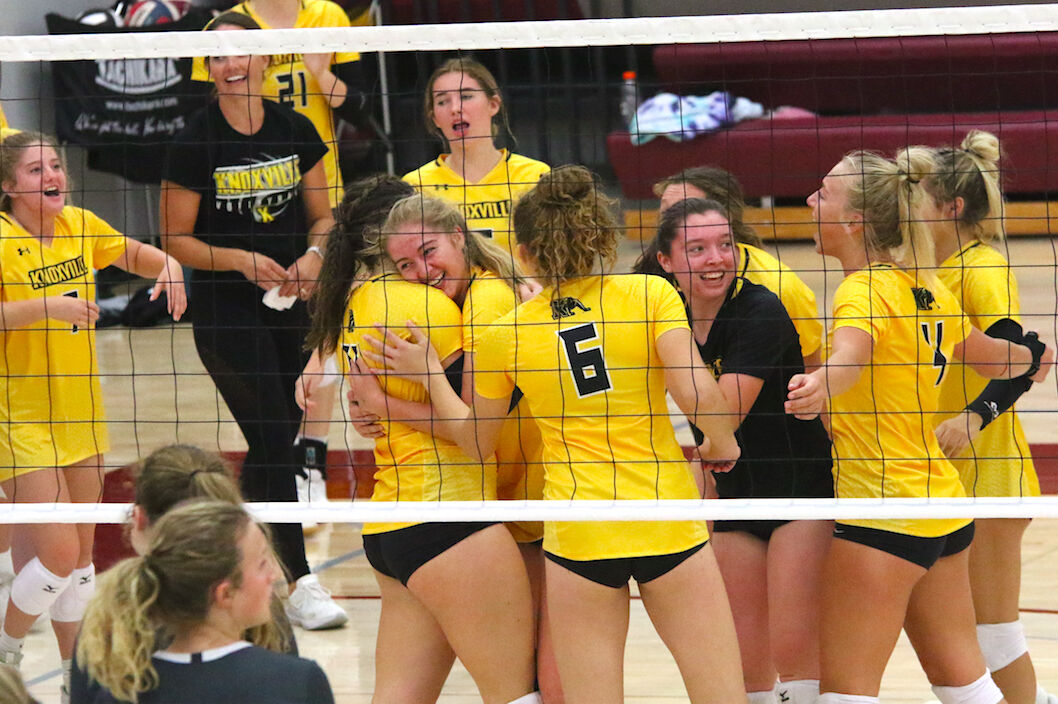 The Knoxville Panthers celebrate after their win against Pella Christian 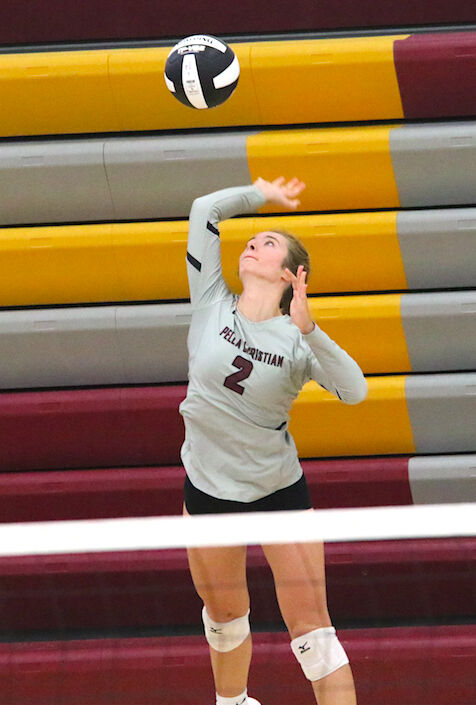 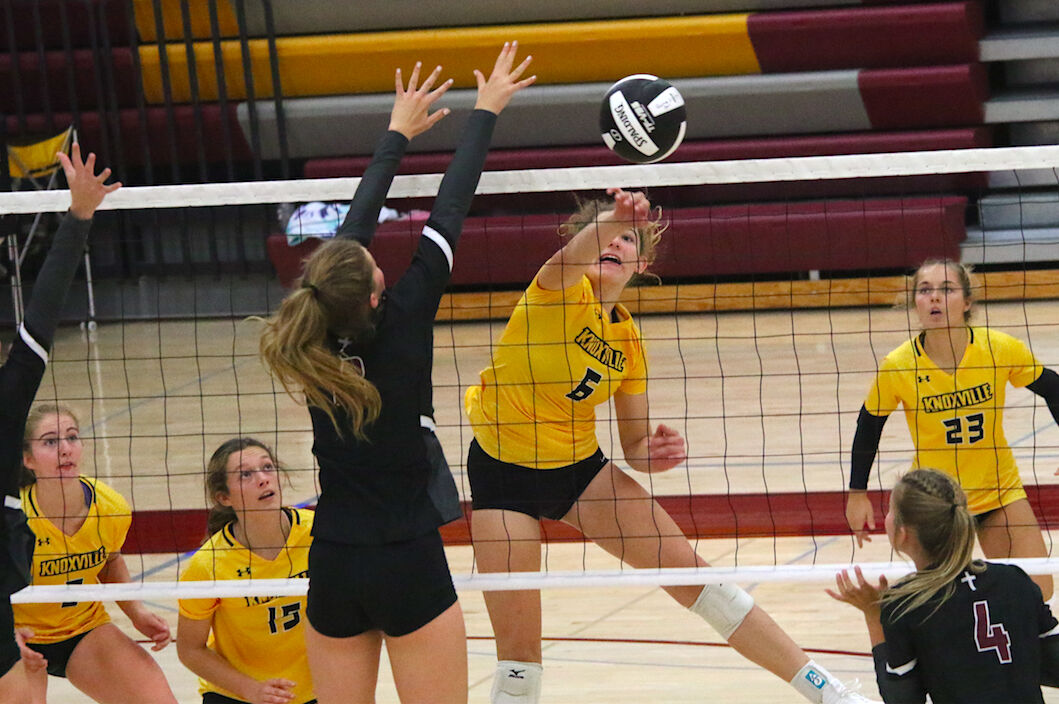 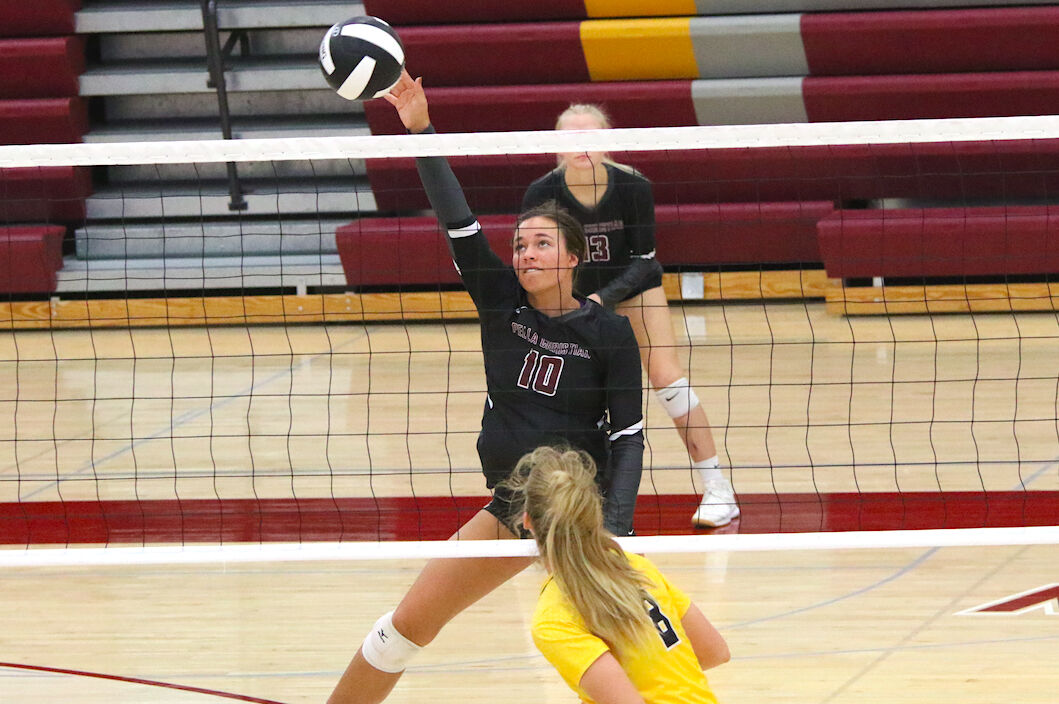 Pella Christian's Trinity Vos (10) gets a kill for the Eagles

The Knoxville Panthers celebrate after their win against Pella Christian

Pella Christian's Trinity Vos (10) gets a kill for the Eagles

PELLA — Four teams made their way to Eagle Lane for the Pella Christian volleyball tournament on Saturday morning. Pella Christian, Knoxville, Albia and Grand View Christian battled it out for the title with Knoxville leaving with a perfect 5-0 record and a couple of medals to boot while PC was 3-2.

With both teams sitting at 2-0, Pella Christian and Knoxville would meet in the final round of round robin play to determine their seeding for the semifinals.

Knoxville’s offense came out firing, jumping ahead 10-2 before eventually taking the first set 21-11. The second set played tighter with the Panthers holding a one-point lead midway through the set, but late miscues from PC opened up the door for Knoxville as they closed out the set 21-15 for the 2-0 win to earn the one seed.

Pella Christian took care of business against Albia as they rolled to a 2-0 (25-14, 25-13) behind strong play of Trinity Vos, who had nine kills.

Meanwhile, Knoxville was having trouble with Grand View Christian again. The Thunder won the first set 25-20 before the Panthers stormed back to take the second set handily, 25-9. The third set saw a lot of back and forth and long rallies with Abby Wadle’s big kill eventually giving the final set to Knoxville, 18-16.

That would set up a rematch in the finals between Pella Christian and Knoxville.

The first set played fairly even with Vos getting the Eagle offense going but service play was in favor of Knoxville. The Panthers were 43-of-47 (91.5%) with six aces while Pella Christian was 47-of-59 (79.7%) with eight aces. Several of those PC service miscues came in the first set as Knoxville took a 1-0 advantage after winning it 25-22.

PC’s quick hitting offense would tee-off in the second set. Freshmen setter Chloe Huisman had great sets to the likes of Vos and Sarah Gritters, who both had 11 kills in the match as the Eagles dominated the second set 25-9 to force a title-decisive third set.

Knoxville reset well and jumped out in front 7-3 early before PC answered out of the timeout to pull within one at 12-11. The Panthers would close out the win with a nice ace from Kira Deaver, a huge block from Brittany Bacorn and a kill from Ella Breazeale to win the set 15-12 and clinch a 5-0 day with a title.

After having to reset against GVC in the match before after losing the first set, the Panthers did well to bounce back from the 25-9 loss in the second set. That kind of mentality is something that helped them go 3-0 in matches that went to the third set in the tournament.

“That's one thing that they're really good at, thank goodness,” Knoxville head coach Mollie Keitges laughed after the final match. “They really don't have long memories. Sometimes that's not helpful, I wish they would kind of remember what works and keep going at that but on the flip side, when we get beat 25-9 in the second set of a championship game, they really took care of the huddle themselves. By the time I turned in the lineup sheet and got back there, they had it all going it’s 0-0 let’s reset and let's restart. I was really proud of them for making adjustments and I think we made some adjustments and executed it.”

On the day, Bacorn led the way with 46 assists and 38 kills while stepping up in different portions of the game all day. On the season, she leads Knoxville in kills, assists, aces and is second in digs.

“Brittany's just so good, she can do it all,” Keitges said. “She's just a phenomenal setter and then she's one of our main offensive threats as well, but the biggest thing about her are the intangibles. She's always a kid that works the hardest and she just has all the energy. Where she is energy wise, the rest of us seem to follow so I’m just super proud of that kid.”

Emma Dunkin led the Knoxville defense with 64 digs and Deaver finishing with seven aces. After starting the year 5-5, the Panthers have grown to go 12-3 in their last 15 games.

“I think our hitters are really becoming better at shotmaking,” Keitges said. “The beginning of the season we had 36 errors against Davis County. We were just going to swing it without a plan and I think we're getting better at making shots that are going to try and score points to win. Defensively, I thought we got some really good touches on the ball. Also, it's our homecoming week, so anytime we can go 5-0 on homecoming week and there's a lot going on, I was really proud of them, especially because they're young and a little bit inexperienced, that we were able to stay focused and everybody at some point stepped up and made a huge play.”