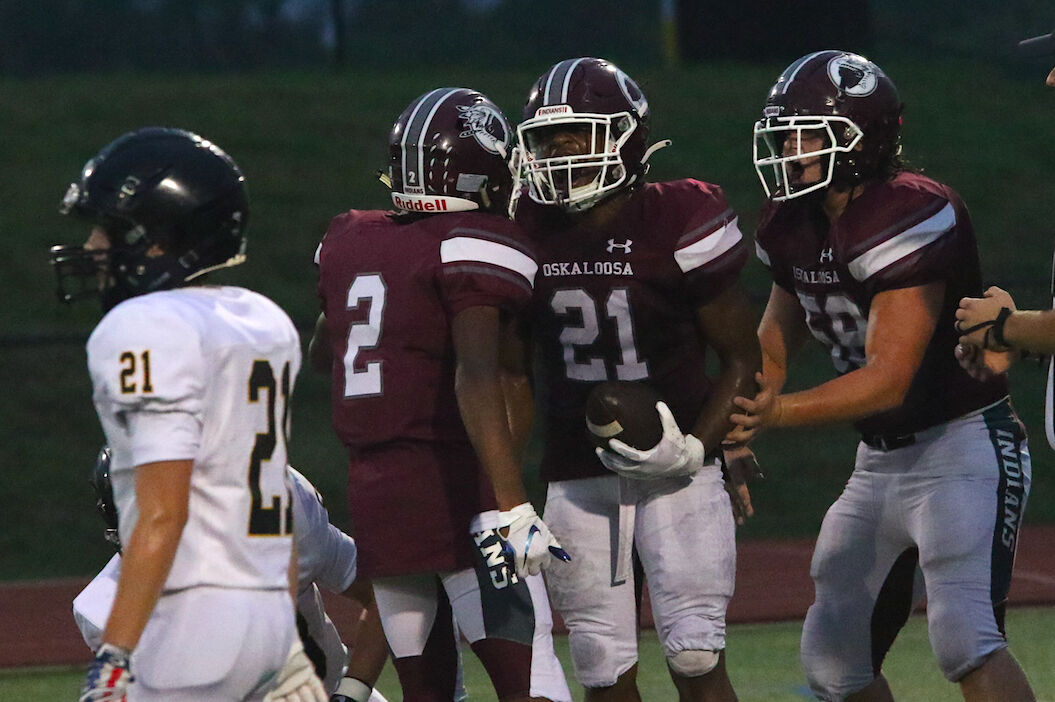 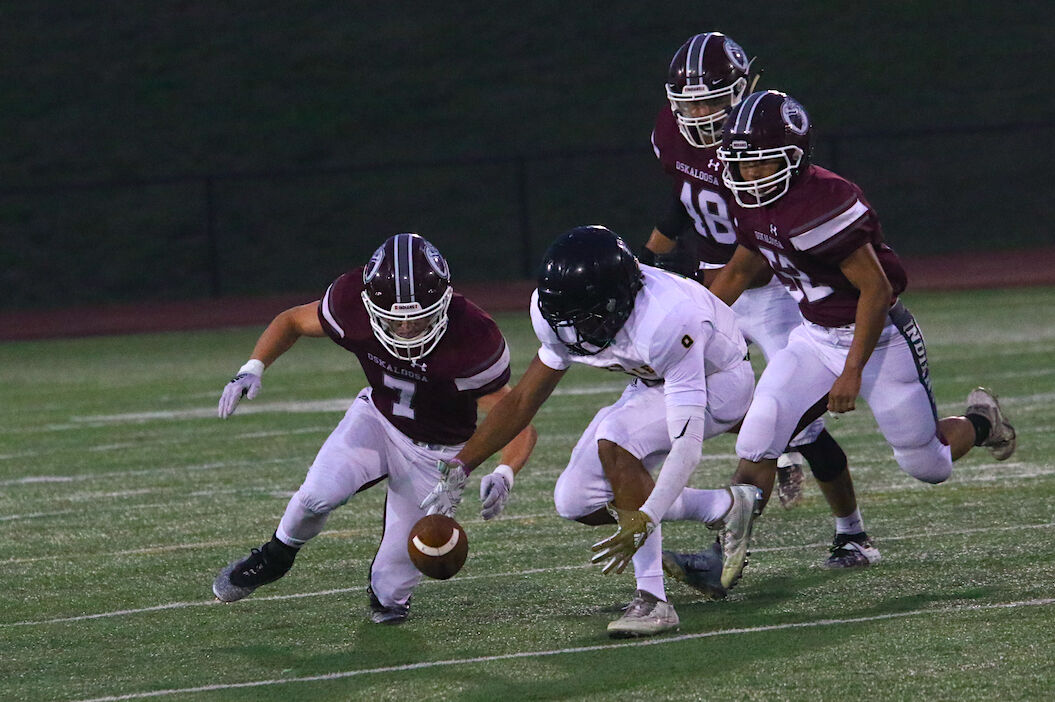 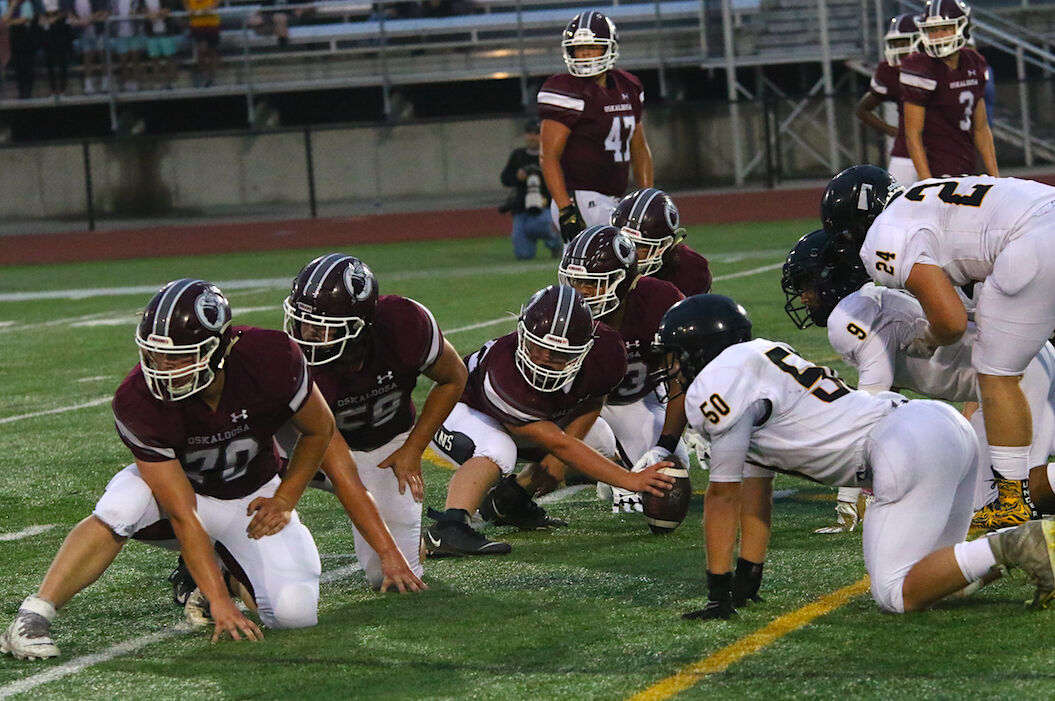 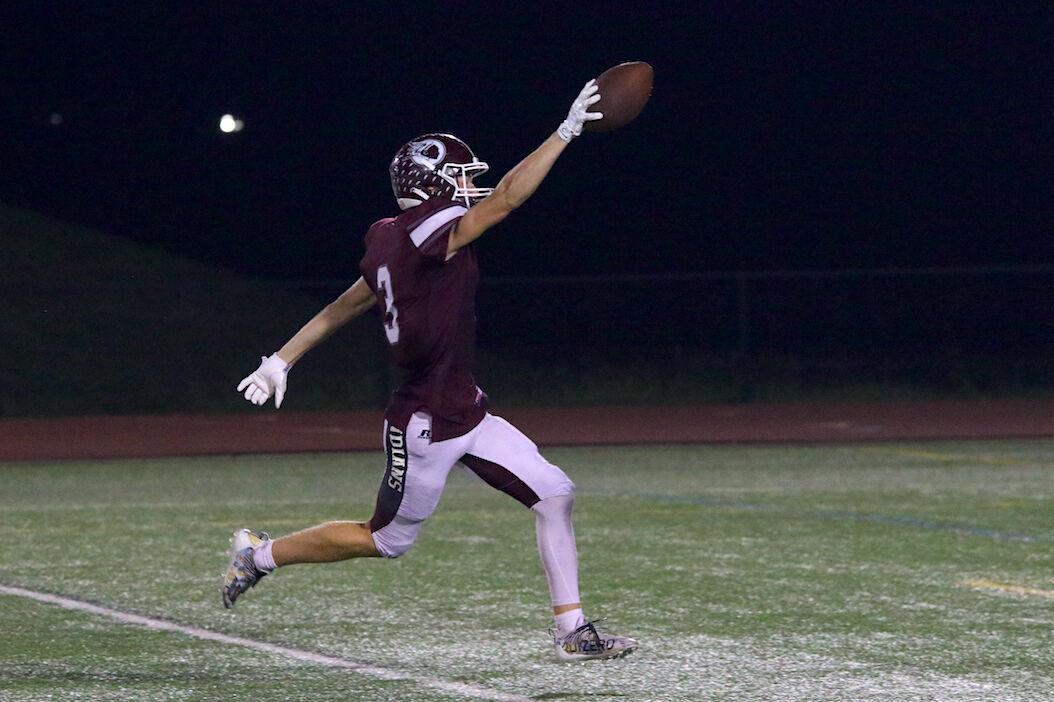 Oskaloosa's Waylon Bolibaugh celebrates after returning a punt for a touchdown

Oskaloosa's Waylon Bolibaugh celebrates after returning a punt for a touchdown

Oskaloosa won the toss and elected to receive to start the game as they wanted to deliver the first blow of the game. They did just that, courtesy of senior running back Darryl Fane. Fane took the opening kickoff all the way down to the Knoxville 37 and would later cap off the nine-play drive by punching it in from one-yard out to put the Indians in front 8-0 in the opening minutes of the game.

Knoxville’s first offensive possession ended in a turnover when quarterback Noah Keefer was hit as he threw, allowing Osky’s JT Baker to pick it off and head the other way.

The Indians wasted little time after the turnover as head coach Brett Doud called for the deep ball with quarterback Keaton Flaherty firing one downfield to wide receiver Waylon Bolibaugh, who made a nice adjustment to make the catch and outrun his defender for the 63-yard aerial score to increase the lead to 14-0.

Oskaloosa would start to slip up at the end of the first and into the second. Flaherty went for another deep pass that was intercepted by Braiden Dudley to put the Panthers in plus territory.

The Indian defense would get Knoxville in a fourth and long after a sack by Colin Snitker. But the ensuing play would see the Panthers get an automatic first down after a defensive pass interference to keep the drive alive.

The maroon defense would hold strong on the goal line as Knoxville went for it again on fourth and goal at five only for Tristin DeJong to be stopped at the two.

Now with their offense backed up against the wall, Oskaloosa would put together a four-play 98-yard drive with a healthy dose of Fane along the way. Flaherty would hit Fane out of the backfield on a screen pass that Fane turned on the jets and went 22 yards for the touchdown to go in front 21-0.

Flaherty finished 10-of-12 on the night with two touchdowns and his two incompletions were interceptions. Bolibaugh was his favorite target as he caught four passes for 118 yards and a touchdown.

Both teams would exchange turnovers and Knoxville would try to score just before the half. With the ball on the Oskaloosa 36, Knoxville’s Keefer would get sacked hard and go down holding his left arm on the final play of the half. He would not return in the second half.

After forcing a quick Knoxville three and out to open the second half, Oskaloosa would pick up where they left off in the first half as Fane would run left and get great blocking on his way to going 60 yards to house to increase the lead to 28-0.

Fane finished with 121 yards on seven carries with two touchdowns on the ground while also catching three passes for 30 yards and another TD.

Blocking was great all night by not only the Osky offensive line but also the receivers. Something Doud preaches to his wideouts.

“That screen play where Junior Ramirez came out and made probably one of the best screen blocks I've ever seen,” Doud said. “I want our guys to play hard for each other. Our o-line wants to play hard for our skill guys and our skill guys want to get after it. That's what I want people to see. Our receivers, even if they're not getting the ball, they're going to go out and block and do their job.”

The final score of the game came a few minutes later in the third as Bolibaugh would return a Knoxville punt 68 yards to start the running clock with a 35-0 lead, which would hold the rest of the way.

Oskaloosa out-gained Knoxville on the night 334-79 with the two teams combining to force seven turnovers. The Indians earned their first shutout in four years and did a great job against Knoxville’s Wing-T offense.

“We talked about three things on defense,” Doud said. “Communicate like crazy before the play, line up and then we have to execute. We did those things and we prepped for what they showed us tonight. It's just do your job and trust that your teammate’s going to do their job.”

Oskaloosa will enjoy this one as Brett Doud improves his record to 2-0 as the new head coach of the Indians as he continues to build his program one week at a time.

“I'm surrounded by a group of great coaches and players that work extremely hard, put a lot of time in and a fan and parent base that just supports us like crazy,” Doud said. “All those things come into play in helping us develop our program. We’re playing with confidence right now and that's what we want to do.”