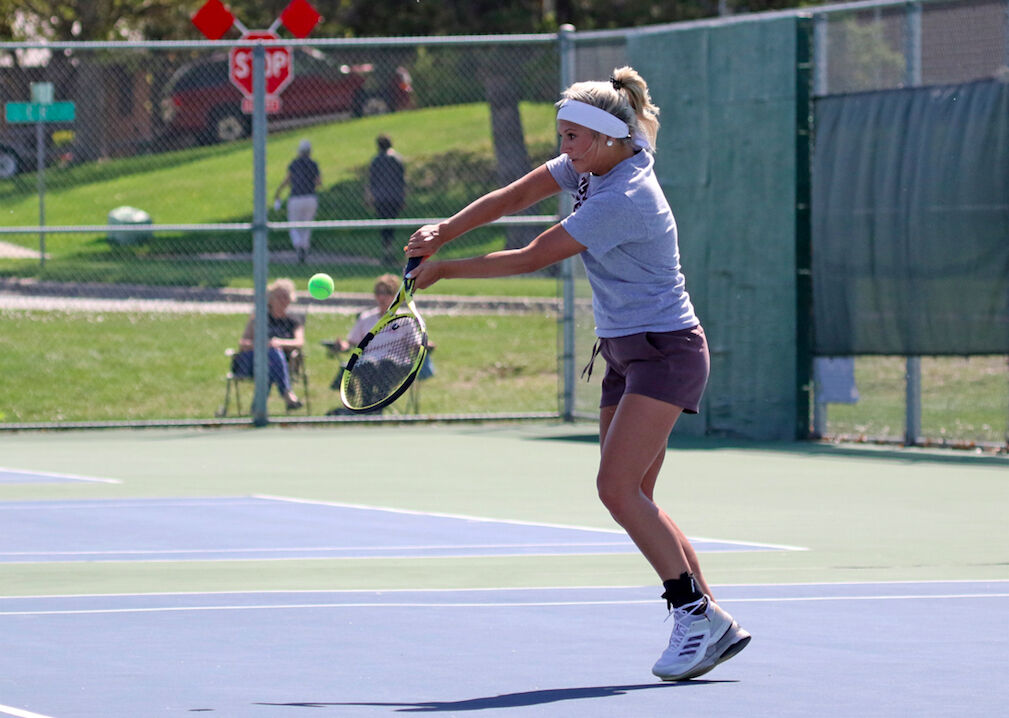 Oskaloosa's Jillian Jennings took second in singles at the Pella Invitational on Saturday. 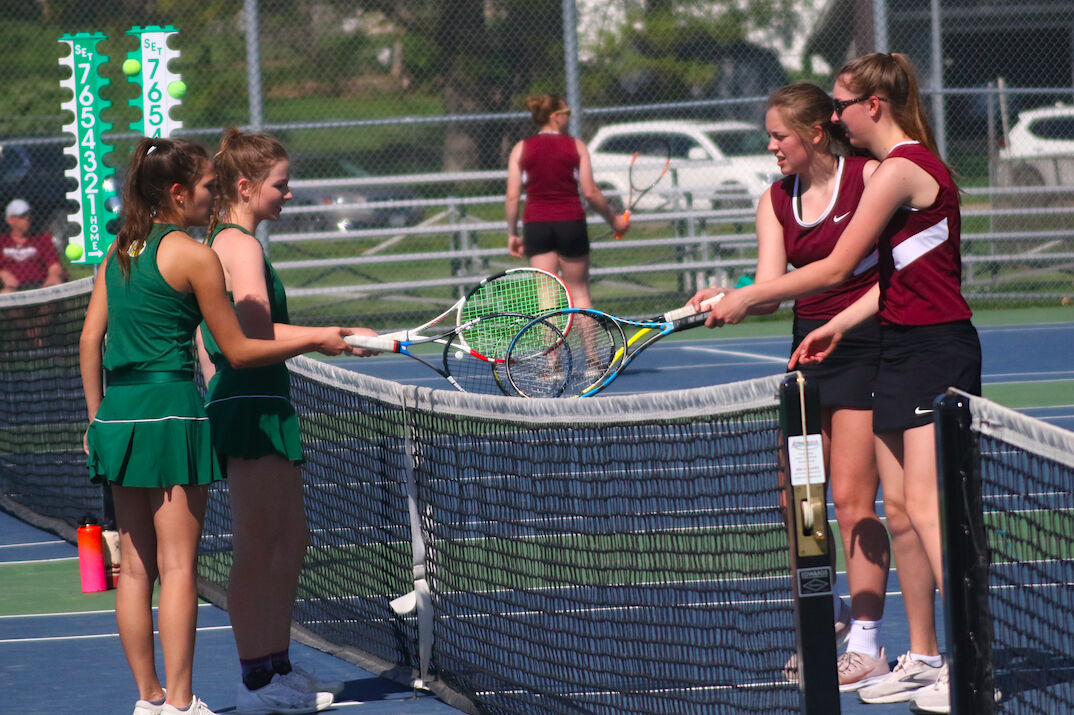 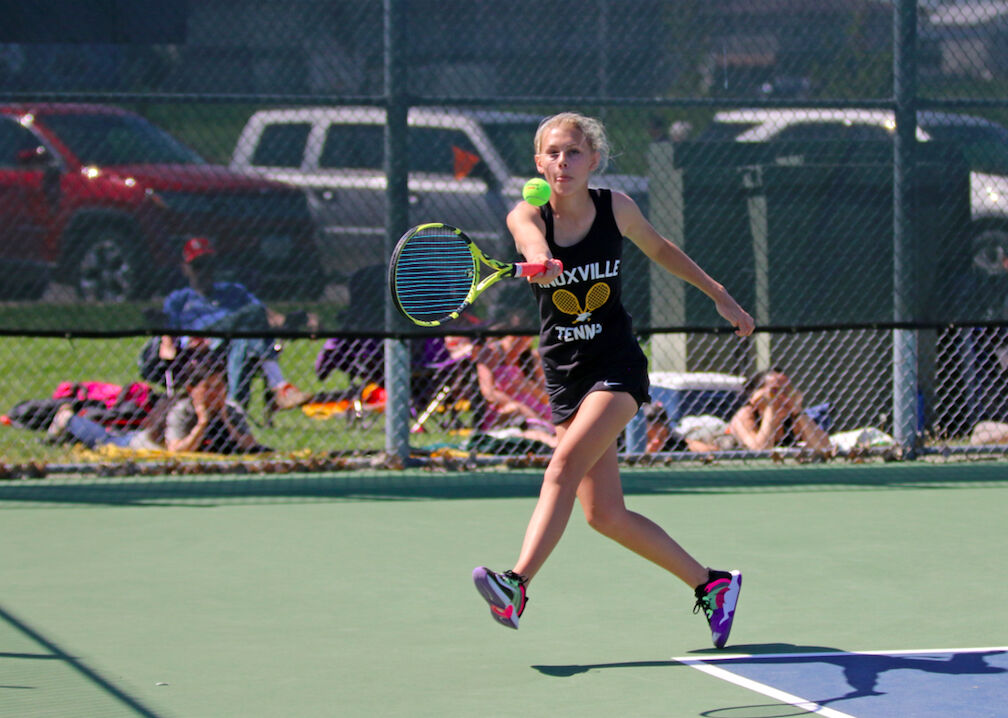 Knoxville's Josalin McKeever was part of the Panthers' doubles team that took seventh on Saturday.

Oskaloosa's Jillian Jennings took second in singles at the Pella Invitational on Saturday.

Knoxville's Josalin McKeever was part of the Panthers' doubles team that took seventh on Saturday.

PELLA — Several area teams were in Tulip Town on a beautiful but windy Saturday for the Pella Girls Tennis Invitational. Oskaloosa took second as a team with 100 points, just five points ahead of third place Pella while Pella Christian finished fifth with 50 points and Knoxville placed sixth with 20 points.

Oskaloosa’s Jillian Jennings had an impressive run to a second place finish in singles play. After a first round bye, she was down a couple of games to Columbus’ Erin Hollen before storming back to win it 8-6 and send herself to the semifinals.

There she would face Ottumwa’s Beverly Bishop and would once again find herself trailing. This time she was on the brink down 7-4 before storming back to win five straight games to take the match 9-7 and earn a trip to the finals.

Greeting her in the finals was a super-talented sophomore in Columbus’ Sasha Hyacinth, who figures to be in the mix for a state title in a few weeks. Hyacinth’s arsenal was on full display as she rolled to an 8-0 win, giving Jennings second place.

Pella’s Emily Blom had a first round bye before picking up an 8-0 win in the quarterfinals over Oskaloosa’s Amanda Fay. Blom then lost 8-1 to Hyacinth before rebounding in the third place match with an 8-1 win over Bishop to earn the bronze.

Fay had a busy day as she ended up playing five matches on the day, going 2-3 on her way to an eighth place finish.

Pella Christian’s Katy Roose and Pella’s Alloree Else also enjoyed five-match days as Roose was an impressive 4-1 on the day on her way to fifth while Else ended up beating Fay in the seventh place match.

In doubles play, Oskaloosa’s Lucy Roach and Presley Blommers put their undefeated record on the line. They started strong with wins of 8-6 and 8-2 on their way to the semifinals. There they would battle the eventual champions from Columbus as they fell 8-4. Columbus ended up with the first and second place doubles teams in the tournament.

After suffering their first loss of the season, Roach and Blommers rebounded with a hard-fought 8-6 win in the third place match against Pella’s Allie Singer and Amelia Poe.

Singer and Poe enjoyed close wins in each of their first two matches, getting wins of 8-6 and 8-5 before falling to Columbus and Oskaloosa to end the day in fourth.

The Pella Christian team of Megan Kramer and Kelly Van Wyk had a first round bye before losing to Roach and Blommers. Kramer and Van Wyk did well to battle in the consolation bracket as they picked up wins of 8-1 and 8-4 to get into the fifth place match where they would fall 8-5 to take sixth.

Knoxville’s lone placing on the day came from the doubles team of Olivia Maasdam and Josalin McKeever. The two had a first round bye before losing to Columbus in a tight quarterfinals match, 8-6.

Maasdam and McKeever stayed alive with an 8-5 win in their first consolation match before falling in another close 8-6 match to send them to the battle for seventh place. The Panther duo jumped ahead and didn’t look back on their way to an 8-2 win and a seventh place finish.