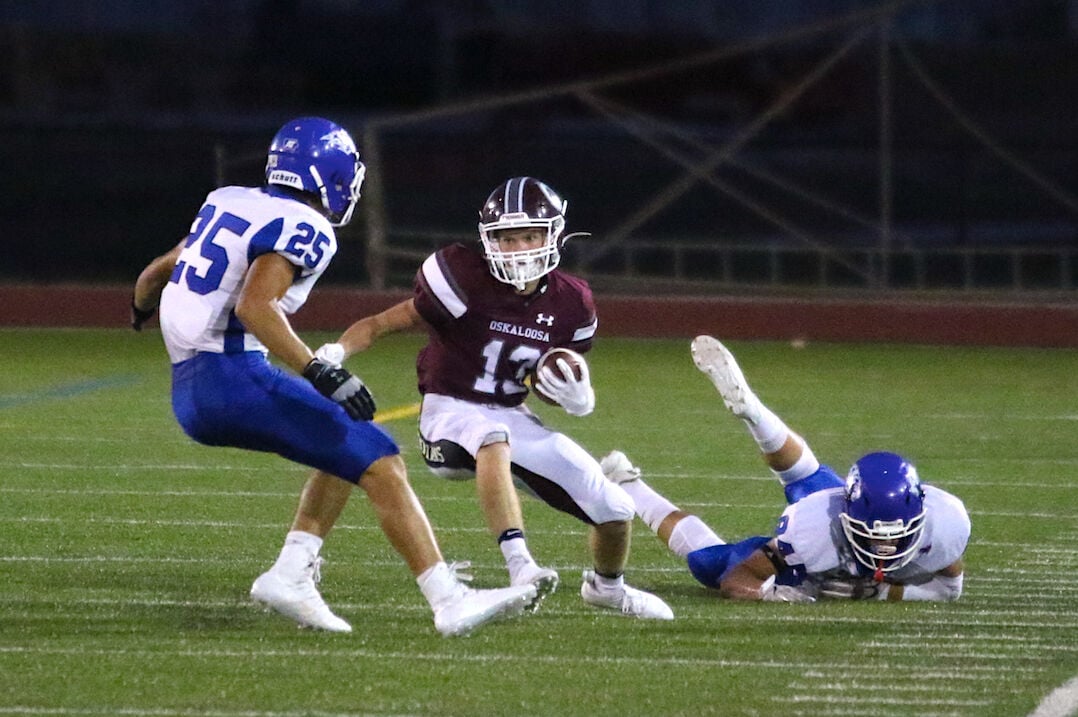 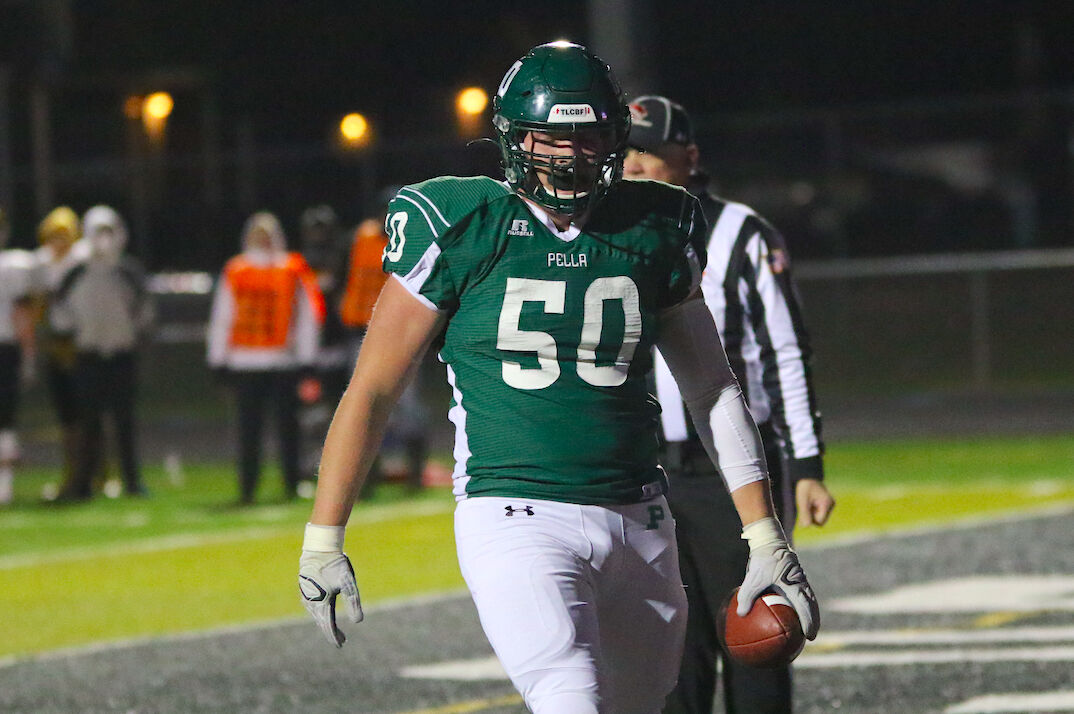 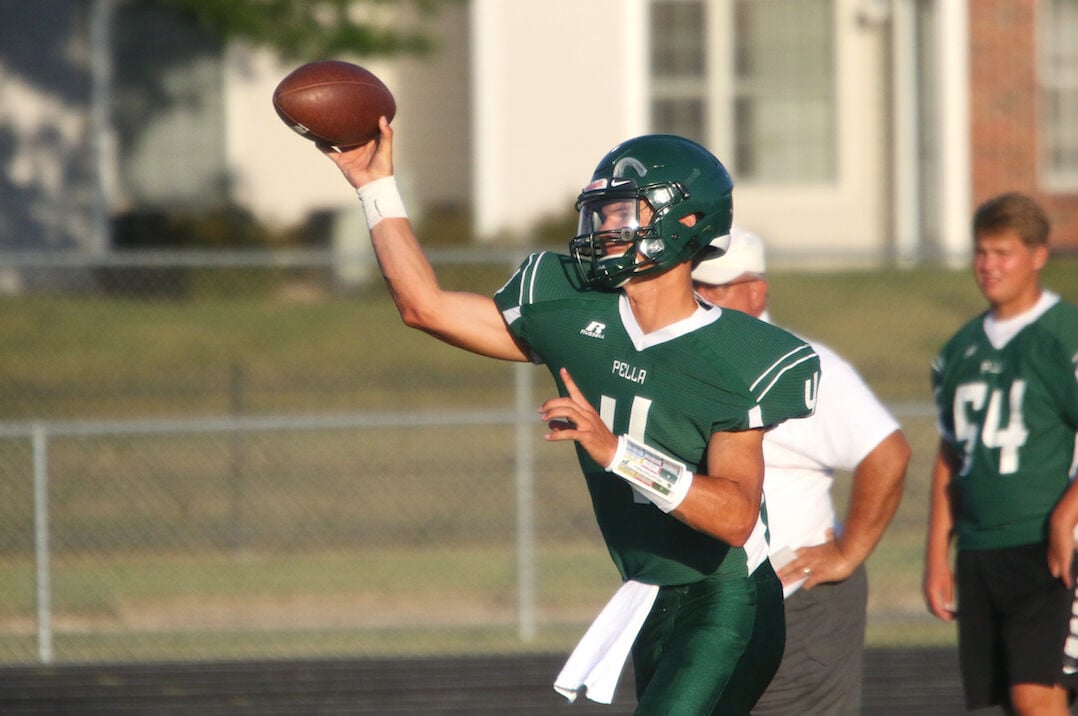 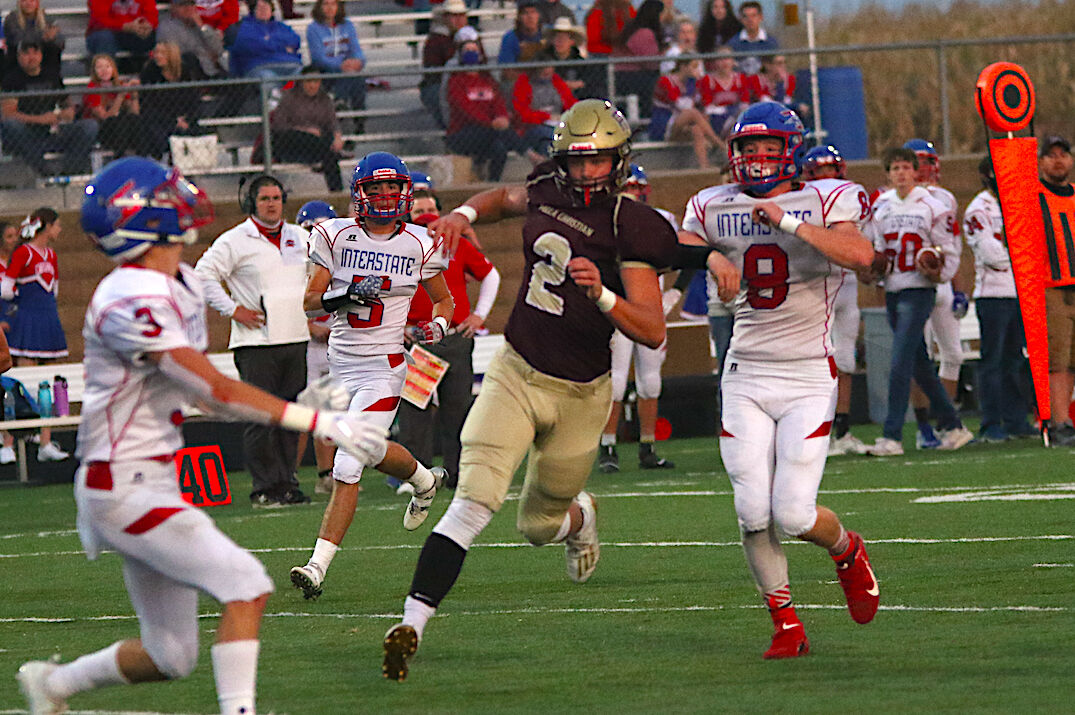 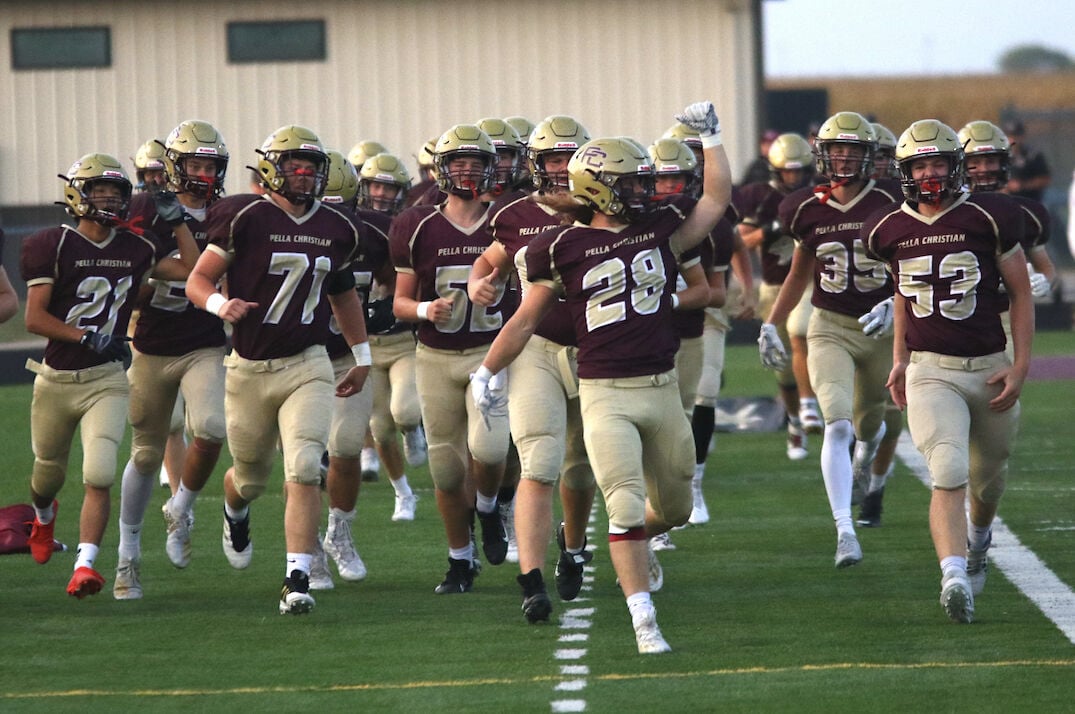 Pella Christian's Cody Boender (28) leads the Eagles out on the field.

Pella Christian's Cody Boender (28) leads the Eagles out on the field.

OSKALOOSA — The Iowa Print Sports Writers Association held their football all-state meeting virtually on Sunday due to COVID-19. Five area boys were selected to those teams.

Spry, a senior, might have been the MVP for Osky on both sides of the ball. Defensively, the corner had 15.5 tackles and was the team leader with five interceptions, which was tied for fifth in 3A. He also led the Indians with 31 catches for 428 yards and four touchdowns.

Huisman, a senior, anchored both the offensive and defensive lines for Pella. The North Dakota State commit garnered a lot of attention from opposing teams and was still able to finish with 36 tackles, 10 for loss and three sacks, which was second on the team. He also wasn’t a stranger to the end zone as he recovered two fumbles including one he took back for a 58-yard touchdown. Huisman would also line up at fullback in short-yardage situations and would finish with seven carries for 21 yards with two rushing touchdowns.

Mace, a senior, was able to flip the field several times for the Dutch. The strong-legged Mace finished ninth in 3A with an average punt of 41.1 yards. He passed for 1,044 yards with nine touchdowns against nine interceptions while also running for 316 yards (second on the team) with four more TDs.

Mulder, a senior, had himself a heck of a final season for PC. The defensive end finished second on the team with 69 tackles this season. He also broke a couple of school records on the way, his 7.5 sacks (tied for third in 1A) made him the all-time career sacks leader in Eagles history with 15 while his 21 tackles for loss (led 1A) also broke a school record.

Boender, a senior, also broke a school record along the way this season. The linebacker was a tackling machine this season, finishing with 102.5 tackles including 85 solo tackles (led 1A). His 102.5 tackles were good for second in 1A. He also had a team-high three interceptions. Boender was also the team’s leading rusher with 841 yards and 12 TDs.

The Class 1A captain is Cooper DeJean, the OABCIG senior quarterback who will wear the black and gold at the University of Iowa next year. DeJean led the Falcons to back-to-back state championships, in Class 2A in 2019 and in Class 1A this year. He was the leading passer in the state this year, throwing for 3,447 yards, completing 60 percent of his passes. He also rushed for 1,235 yards this year, averaging 9.4 yards per carry. He was a dangerous return man, with most teams trying to kick away from him, averaging 37.8 yards on kickoff returns and 26.2 yards on punt returns.

Washington two-way starter Trashaun Willis is the captain of the Class 3A team. The 6-foot-5 and 235-pound inside linebacker, a three-year starter, had 37.5 tackles and an interception for the Demons, who limited regular-season opponents to fewer than 13 points per game. In his first year as the team’s starting quarterback, Willis passed for 907 yards and 12 touchdowns while also rushing for 523 yards and 13 touchdowns as Washington was 8-1, state-ranked for the entire season and reached the Round of 16 in the playoffs. Willis, named the offensive MVP in District 5, has done all this with just one arm. While in the womb, strands from his mother’s amniotic sack wrapped around his left elbow and stunted his further growth. Also a basketball player, Willis has yet to make a college decision.