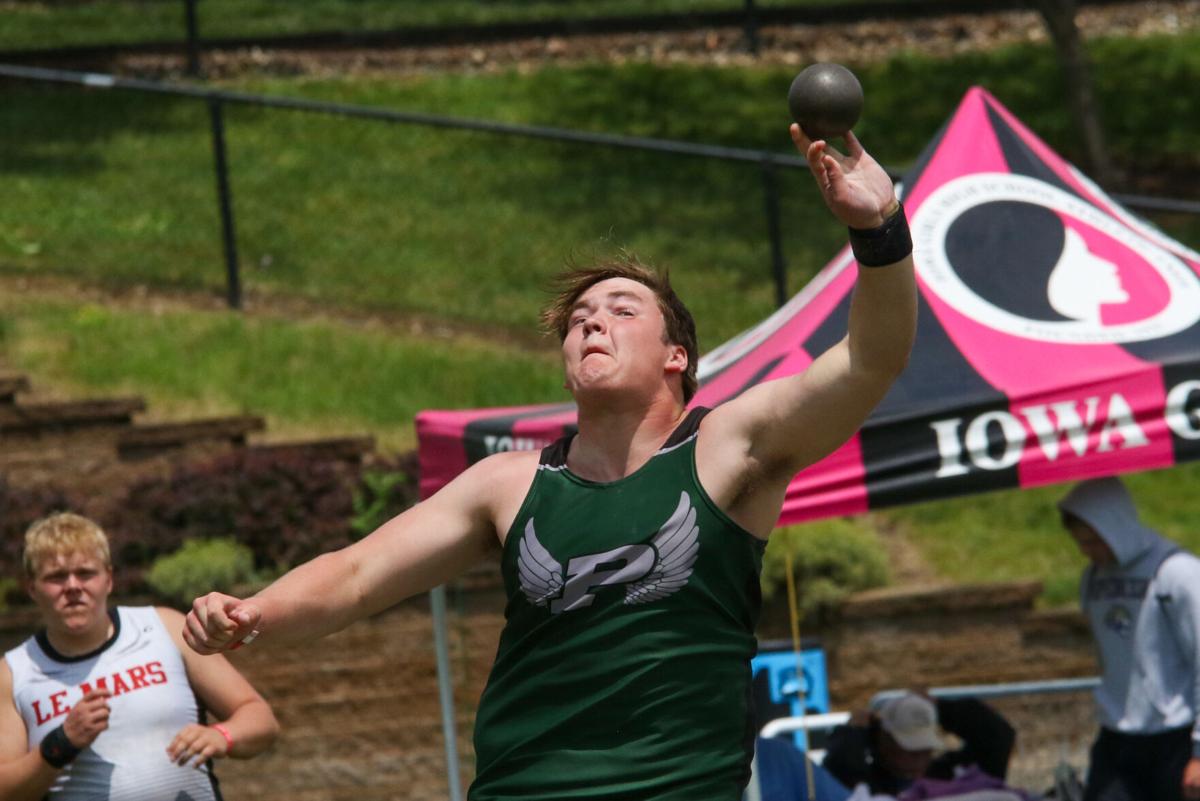 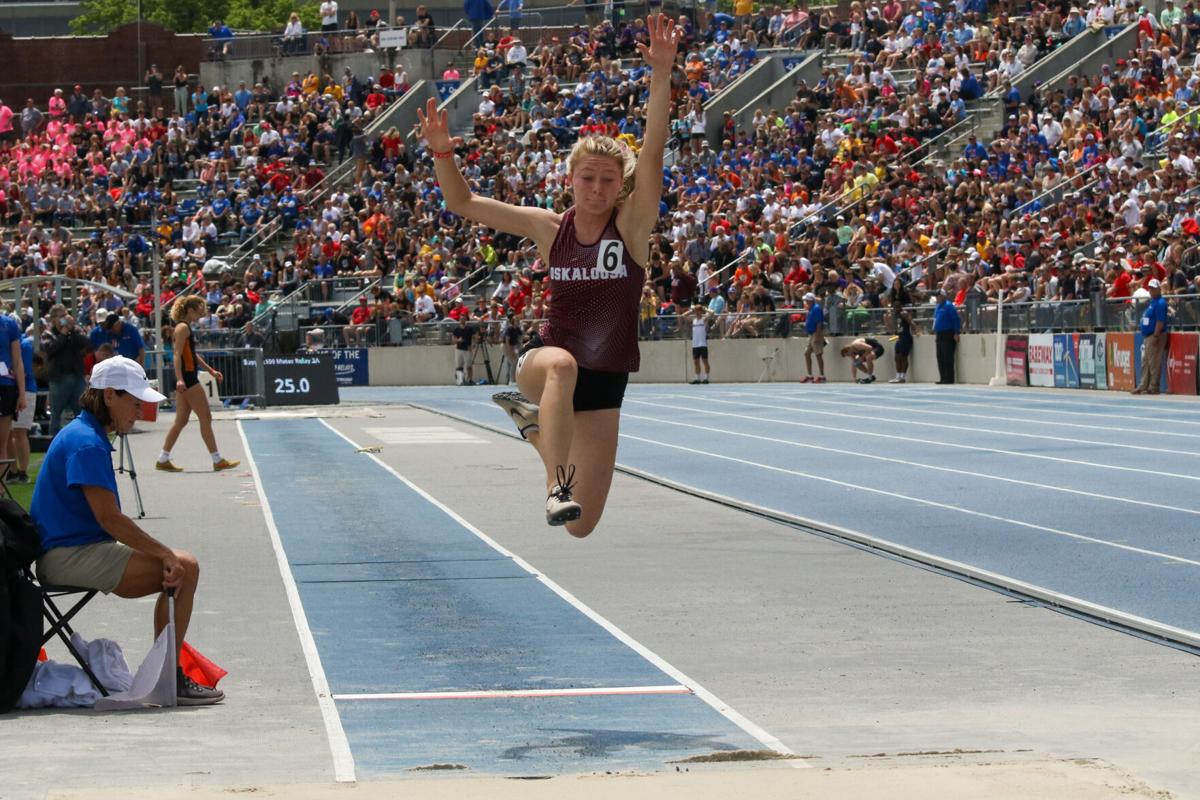 Oskaloosa's Maleah Walker took third in the long jump at 17-10.5 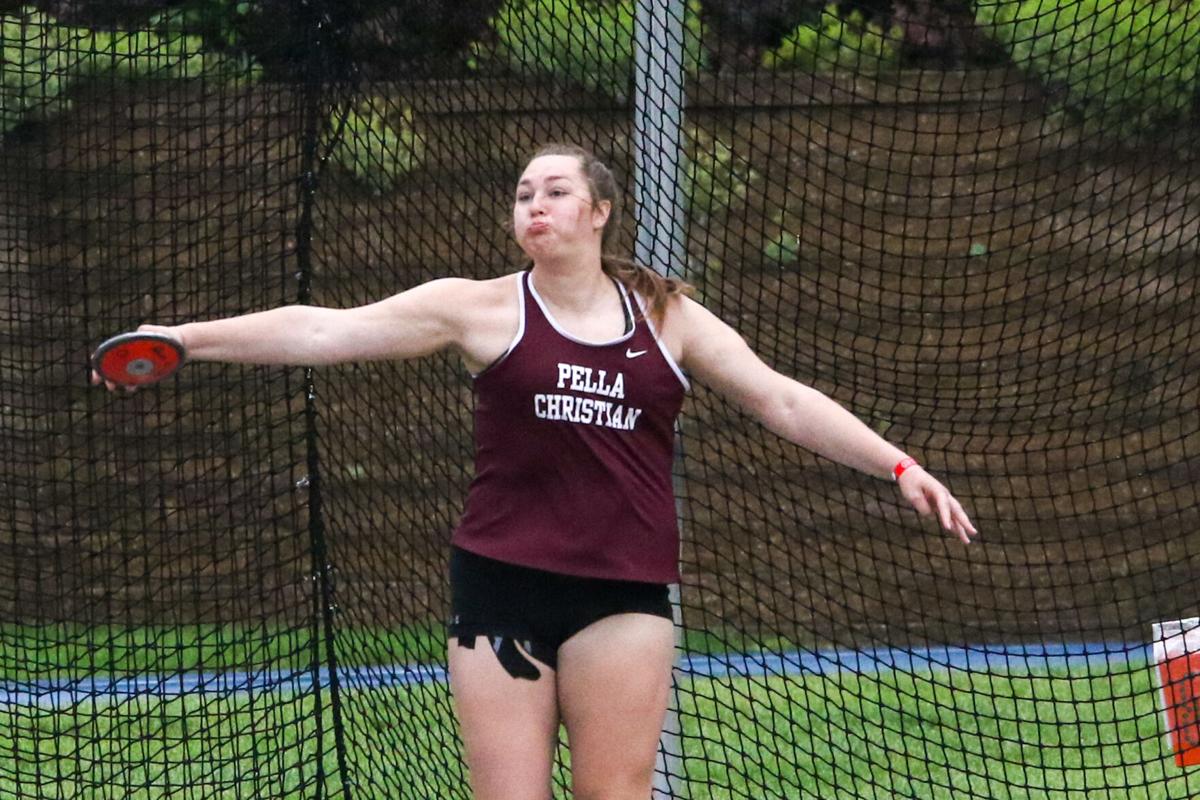 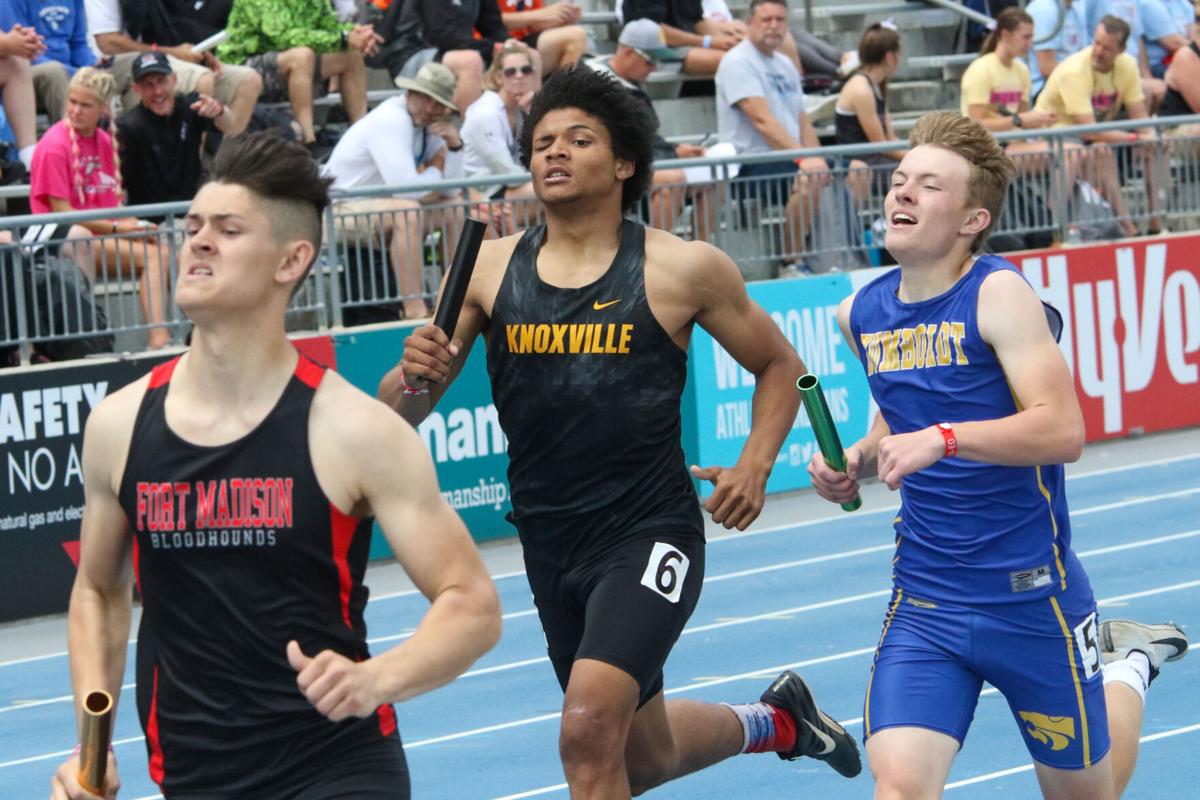 Oskaloosa's Maleah Walker took third in the long jump at 17-10.5

DES MOINES — Pella took a few steps closer to their claiming their first boys team track and field title since 2016 as they upped their point total to 45.5 on Friday and stand 15.5 points clear of second place ADM.

The highlight of the day came over at the shot put where Pella’s Kody Huisman backed up his Drake Relays title by winning state.

Huisman started in the second flight and was in good position but a fantastic warmup throw before the finals got him in the right spot.

“I had a really good warm up in between the final set and the beginning set,” Huisman said. “I did a good warm up around 60 or 61, and I just carried on through that and did the same thing. It just didn't go quite as far, but far enough.”

Far enough it was as Huisman ripped off a throw of 59-4.75 in his first throw of the finals to take the outright lead. That throw would hold as Huisman claimed the title in his final event as a Dutchman.

“It'll probably hit me in about a week or so,” Huisman said. “I have to move to college soon so I realize I'm done with throwing and it'll be pretty sad moment. I've loved throwing, I've been throwing since middle school and it's been awesome figuring out everything and everything about throwing. I'll miss it for sure but bigger things are coming.”

Big results continued for Pella on the track including a couple of big runs from Gage Huyser. Huyser entered the first heat of the 400 hurdles as the 19th seed but would put together a big PR of 56.11 which would hold through the three heats for third place.

Huyser also qualified for the 110 hurdles finals after taking fifth (15.34) while teammate Nolan Clayberg also got into the finals in eighth (15.59).

Rounding out the boys events for the day was the 4x100 of Jacob Byers, Jrake Van Hemert, Nick Rus and Blake Meyer with a 23rd place finish at 45.68.

The Oskaloosa girls also remain in the top five of the team standings with 20 points through two days.

Leading the way was Maleah Walker in the long jump. Walker led after the first round of jumps with a 17-10.25 but Keokuk’s Miracle Ailes and Carlisle’s Isabelle Noring would just creep past her at 17-11.25 as the event went on.

With the meet running 15 minutes ahead of schedule, Walker had to rush her final couple of jumps in order to check in and get prepared to anchor the upcoming 4x400 prelims. Even though she scratched her final two jumps, a third place finish was something to be proud of for the sophomore.

“It was hard because in the finals I rushed a little bit and did three jumps pretty quick, but I’m glad I got third,” Walker said.

Walker then anchored Oskaloosa’s 4x400 along with Macie Krier, Sage Adam and Jordan Czerwinski. All four ran well but the Indians finished just outside of medaling in 10th place with a season-best time of 4:09.93 in front of a packed Drake Stadium.

“It feels great,” Walker said of the atmosphere. “I've never really ran with this big of a crowd. I went to Drake Relays but there were not as many people. This is crazy and a lot of fun.”

Czerwinski had another close call in medaling in the 400 hurdles. She ran a PR of 1:07.33 which was good for ninth overall.

Oskaloosa also had another relay run on Friday with the distance medley starting off the day. Krier, Faith DeRonde, Czerwinski and Adam ran well in their heat and would finish 16th with a time of 4:26.49.

DeRonde then quickly made her way over to the shot put for the second flight as she looked to build off of a first place finish in the discus on Thursday.

Unfortunately for DeRonde, she finished just outside of the finals with a throw of 38-3.5 putting her in ninth place. Her teammate, Sophia Dykstra was looking for her second medal of the meet and would get it with an eighth place finish with her throw of 39-1.25 wrapping up a dominating season for the Osky throwing duo.

The Oskaloosa girls currently hold down a fifth place spot and will try to add a few more points on Saturday in the sprint medley and with Walker in the 200 finals. Either way it’s been a season to remember for the Indian girls.

“This season's been so fun,” Walker said. “Everybody's doing so well, so many PRs every meet, it's just so fun to be with them here, too.”

“To say I'm proud of these ladies is an understatement,” Oskaloosa girls head coach Betsy Luck added. “The work they have put in and the positive attitudes they have had all season is unmatched.”

The Oskaloosa boys were also in action on Friday with Reed Brown, Waylon Bolibaugh, Tatum Westercamp and Patrick De Ronde running in the distance medley, taking 16th overall with a time of 3:43.90.

The Lady Dutch put together a couple of medalist finishes led by Delanie Reynolds, Calla Kerndt, Marissa Hackman and Emily McMartin flying to third place in the 4x200 at 1:44.94.

Reynolds, Hackman and McMartin later joined Roselande Vanderhoff to take another third place. This time in the 4x100 prelims where they will be trying for gold on Saturday after punching in a time of 49.50 on Friday.

Hackman, who had three races on the day, joined Kerndt, Mia Warner and Maddie Schmitz for a 20th place finish in the distance medley at 4:26.49.

The Lady Dutch quartet of Ashley Blommers, Warner, Schmitz and Jacie Trine would finish 23rd in the 4x400 prelims with a 4:23.35.

The Pella Christian boys competed in a trio of events on Friday led by Drew Geetings’ 11th place finish in the high jump after clearing 6-foot-1. Geetings then led the PC 4x100 with Isaac Kacmarynski, Peyton Ritzert and Levi Schelhaas to a 16th place finish at 44.90. Carson Breon also ran in the 400 hurdles, placing 22nd with a 59.00.

The PC girls had one event on Friday and it was a big one as Allison Van Gorp, who seeded ninth, ended up grabbing fifth in the discus with a throw of 126-0 to medal.

Knoxville had a pair of events on the day. Ashlyn Finarty got the day started in the shot put by placing 18th with her best throw coming in at 35-3. The quartet of Tristin DeJong, Gavin Montalvo, Kaden McGill and Kieren Nichols then raced in the 4x400 prelims, putting together a strong time of 3:30.68.

The final day of the State Track and Field Meet starts on Saturday at 9 a.m. at Drake Stadium.