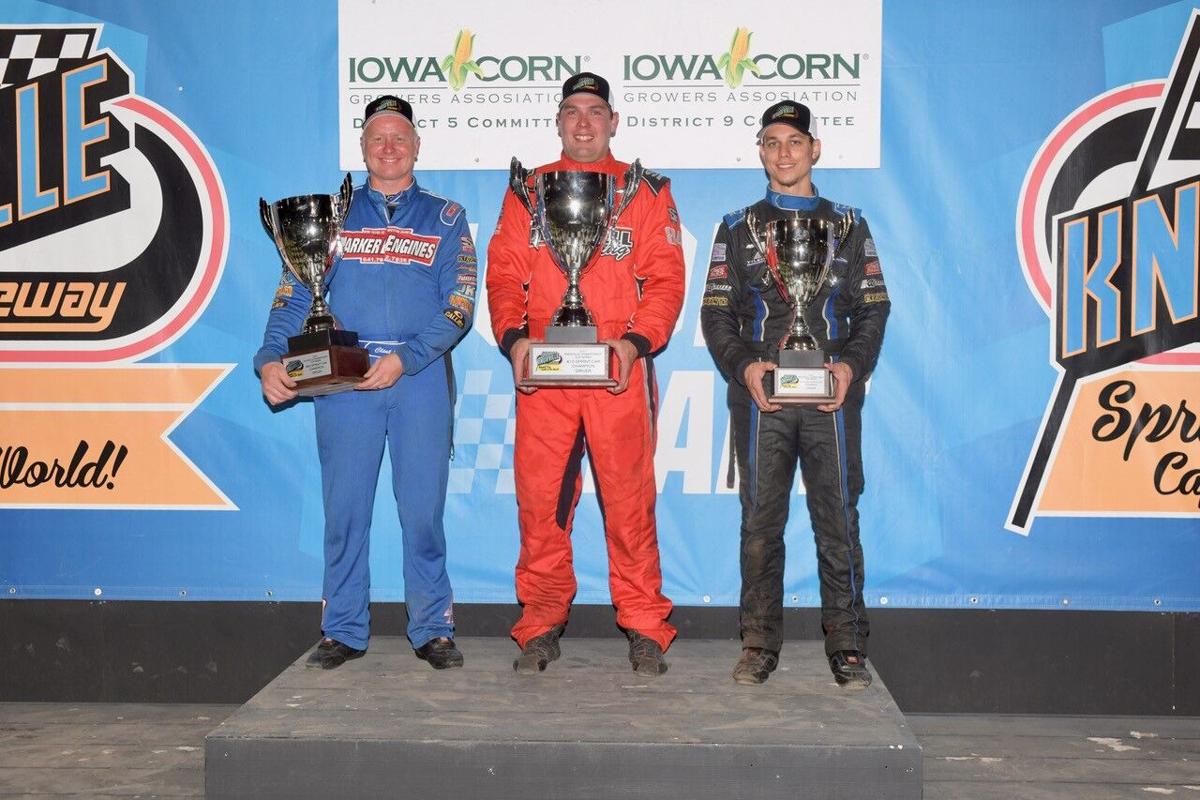 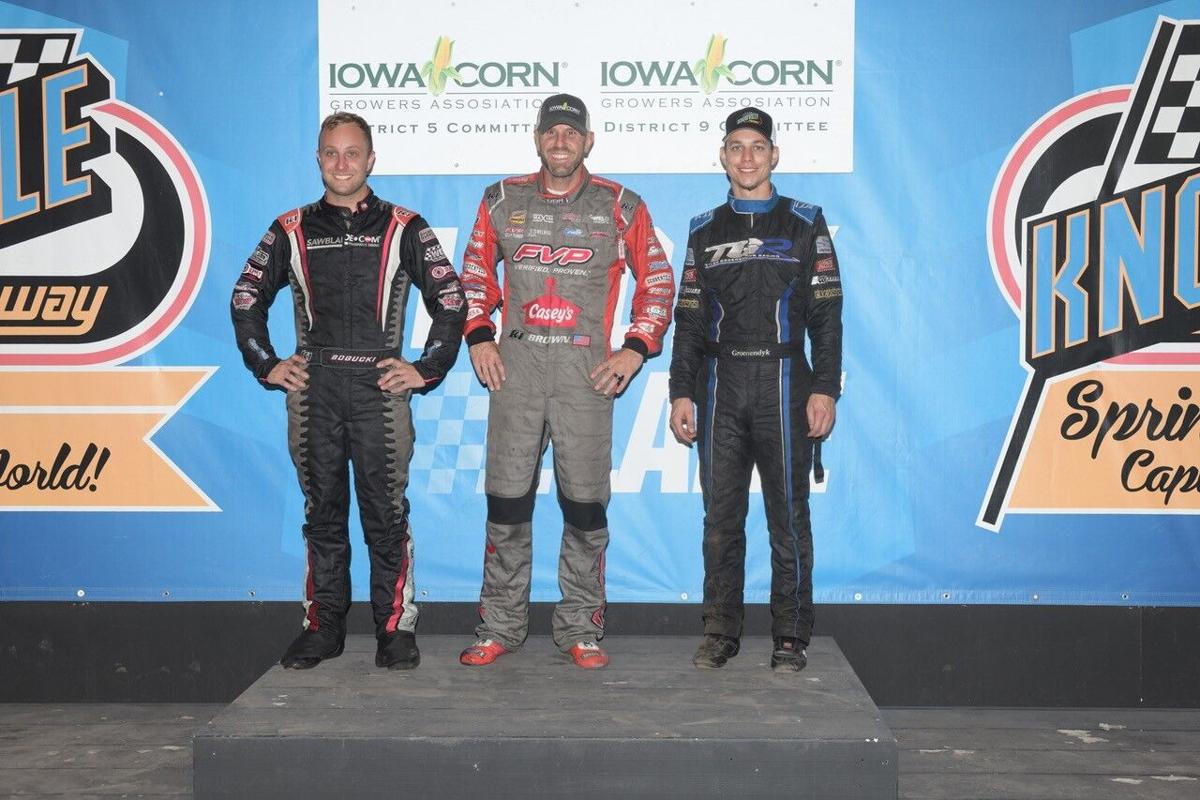 KNOXVILLE – In a wild, crazy night at Knoxville Raceway, two championships came down to the last lap in a night full of drama and excitement on Iowa Corn Growers Districts 5 & 9 Season Championship Night.

Brian Brown did what he had to do in winning the 410 feature, but in the end, he fell just 15 points short of a championship, as all eyes were on Minnesota’s Davey Heskin, who ended up having to climb from row seven to finish in the top five. The 360 class saw heartbreak for Ryan Giles, who appeared on his way to a crown before mechanical failure set in. Jamie Ball was in position to take a title, but Clint Garner did what he had to do to advance to his ninth championship. Scott Bogucki would take his second win here. Tyler Groenendyk had it easiest of all as all he had to do was show up to win his Pace Performance Pro Sprints title. He put the icing on the cake with his fourth feature victory of the year.

A pair of incidents happened before the 25-lap 410 feature could fire off. A Ben Brown spin slowed things. Once green, front row starters, Sawyer Phillips and Justin Henderson, who came in second in points, collided in turn three, ending both their nights.

The incident moved pole-sitter Gio Scelzi and Brown to the front row. With Heskin now starting eleventh, Brown needed to beat him by five spots. Scelzi stormed out to the lead, but shortly after entering lapped traffic, he broke a rear axle six laps in.

Brown assumed the lead ahead of Ayrton Gennetten, Don Droud Jr., Matt Juhl and Sam Hafertepe Jr. One eye was on Heskin, who restarted ninth. Juhl moved into third, and Terry McCarl entered the top five on the restart. McCarl continued his climb by grabbing fourth on lap eight.

Brown entered lapped traffic on the thirteenth circuit, and Heskin was moving up. Using the low side of the track, he moved his was up to sixth, just one spot from his goal. On lap 17, the crowd erupted when he shot under Sam Hafertepe Jr. for fifth.

Up front, Brown was flawless before Droud stopped in turn four with four to go. Heskin would gain an insurance spot, driving by Juhl for fourth, and winning his first track championship.

Brown’s 56th win paid him $5,000 and put him just one victory behind Steve Kinser for fourth on the all-time win list at Knoxville. Gennetten ran a strong second, ahead of McCarl, Heskin and Juhl. Roger Crockett, Austin McCarl, Josh Schneiderman, Dylan Westbrook and Tasker Phillips rounded out the top ten. Henderson set quick time, while Schneiderman, Brown and Scelzi won the heats. Dustin Selvage claimed the B main.

“This car was good all night long,” said Brown in Victory Lane. “It’s good to be back home. I was hoping it was going to be pretty exciting there with me and Justin trying to race for a championship. He just got racing hard, and I luckily snuck by there. Congratulations to (Davey) and his team. They did a phenomenal job. They are what sprint car racing is. He, his brother, and grandpa. Anytime you can win at Knoxville, it’s always good. No one can say they won the last one until April again. It’s an honor to race here, and be a part of Knoxville.”

“There’s just no words,” said an emotional Heskin addressing his track championship. “I thought we were goners after the time trial (he entered with a 78-point lead on Henderson and 86 point lead on Brown, who registered quick time and second quick, respectively). I really thought I cut a good lap. When I got up to fifth and got past Sam, I thought ‘Alright, let’s get the wing back and let’s go!’ I can’t thank my family and friends enough. I still don’t know what to say, it’s so special. I just can’t believe it. This is why we travel five hours to race here. We earned that one!”

The 360 class also saw a three-way battle coming in, with Ryan Giles just needing a solid night in the top ten for a title. Austin Miller and Kaleb Johnson contacted on the first try at green in the 20-lap main event, and on the second run, Miller flipped in turn one, collecting Mike Johnston. It was a rough night for Miller, who also had an accident after the checkers of his heat. Collin Moyle spun on the third try at green, before things actually got going.

Joe Beaver led Jamie Ball, Christian Bowman, Giles and Garner early on. Bogucki shot by Garner for fifth on lap two, before Bowman went up in smoke in the third spot.

Ball used the restart to storm to the lead, while Giles also got by Beaver for the second spot on lap five. The leaders hit lapped traffic on lap nine, but with seven to go, Giles, who seemed to be cruising to his first championship, lost power with seven to go.

Ball led the field back to green, ahead of Beaver, Bogucki, Garner and Moro. Beaver retook the lead on lap 14, but Ball slid back by in one and two, to reclaim it. Bogucki was on the move however, getting by Beaver on the low side and then passing Ball high in turn four to take the point with four to go.

Garner shot under Beaver, who had made contact with Ball in his battle for the lead, to claim the third spot, and seal a championship by just 17 points over Ball in the final standings.

“I was starting to fade pretty bad getting free,” said Bogucki in Victory Lane. “It actually got slicker than we anticipated. I saw they were getting stuck in traffic, and I’d been pretty committed to the bottom. I thought I’d just stay around the top. I led three of these this year and they got away from me. I wasn’t going to let it happen this time. Jamie is a first class racer, and you can run side by side with him. It was a lot of fun.”

“The older I get, the more I understand you are just along for the ride,” said Garner of his ninth career 360 track title. “Coming in 80 points behind, I told everybody there’s no way. We’ll just do our best and see how it plays out. Ryan had it under control if his engine wouldn’t have let loose on him. I think we’d have ran second to him. We just got lucky, I guess. My age helps. I make sure I don’t put myself in predicaments that take me out of races. You’ve got to finish the race. It takes a lot of stuff to make it all happen.”

It was clear sailing for Tyler Groenendyk in the Pace Performance Pro Sprints 18-lap feature. Chase Young was running second when he flipped after hitting the turn three infield berm on lap two. The rest of the race went uninterrupted, with Groenendyk sailing away to a straightaway lead on lap seven.

“This is unbelievable,” said Groenendyk of both the feature and his track title. “To do what we’ve done this year is incredible, and it really has to do with all the people surrounding us and behind us. I’ve got a lot of laps around here, but it had been a couple of years. This is an accumulation of that knowledge I had and having the great racecars we’ve had here. I told the guys before tonight, that we finally had a night with no pressure. Then, the invert put us on the pole, so then we had to win the race. We came out on top so it’s all good.”