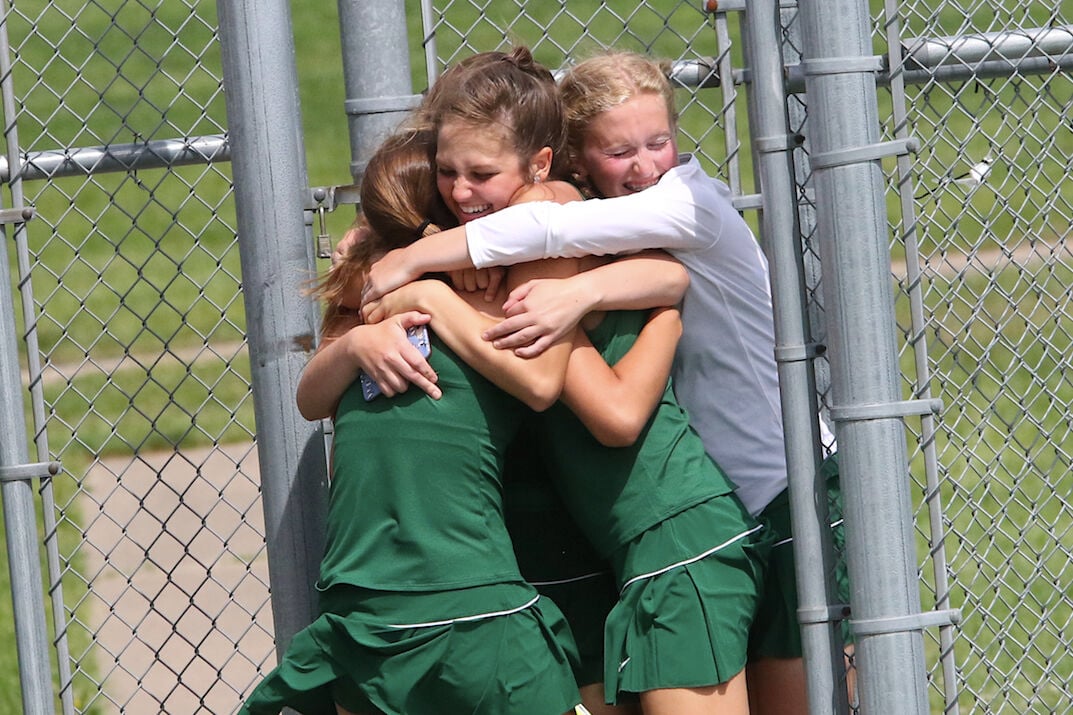 Pella's Emily Blom (left) is swarmed by her teammates after qualifying for state. 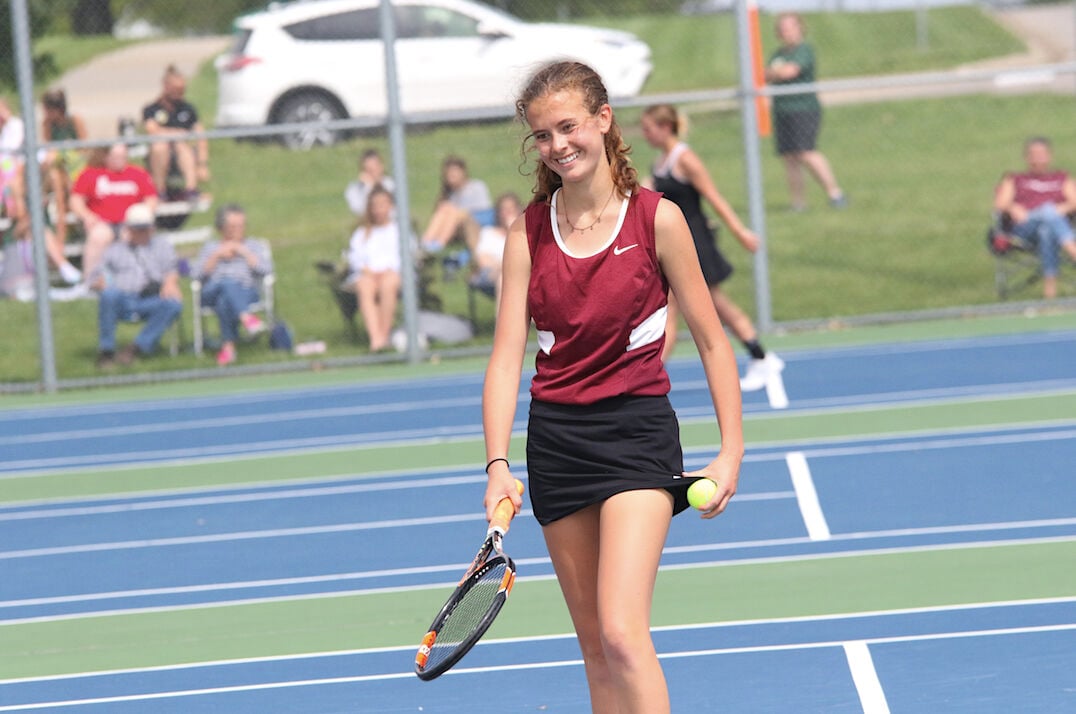 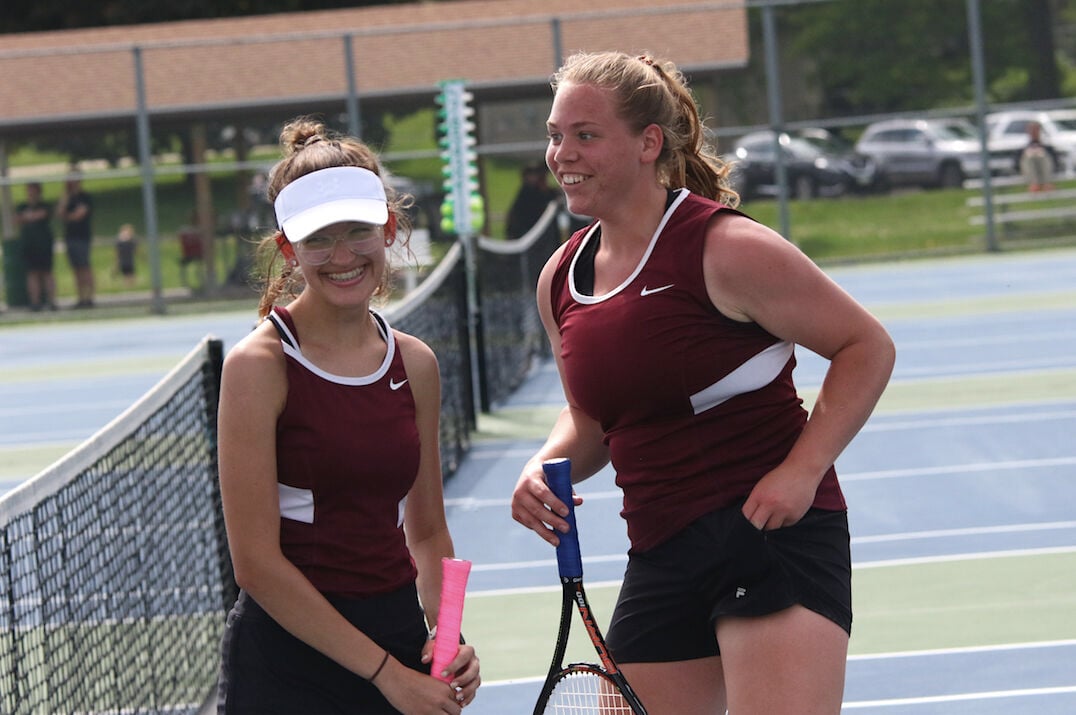 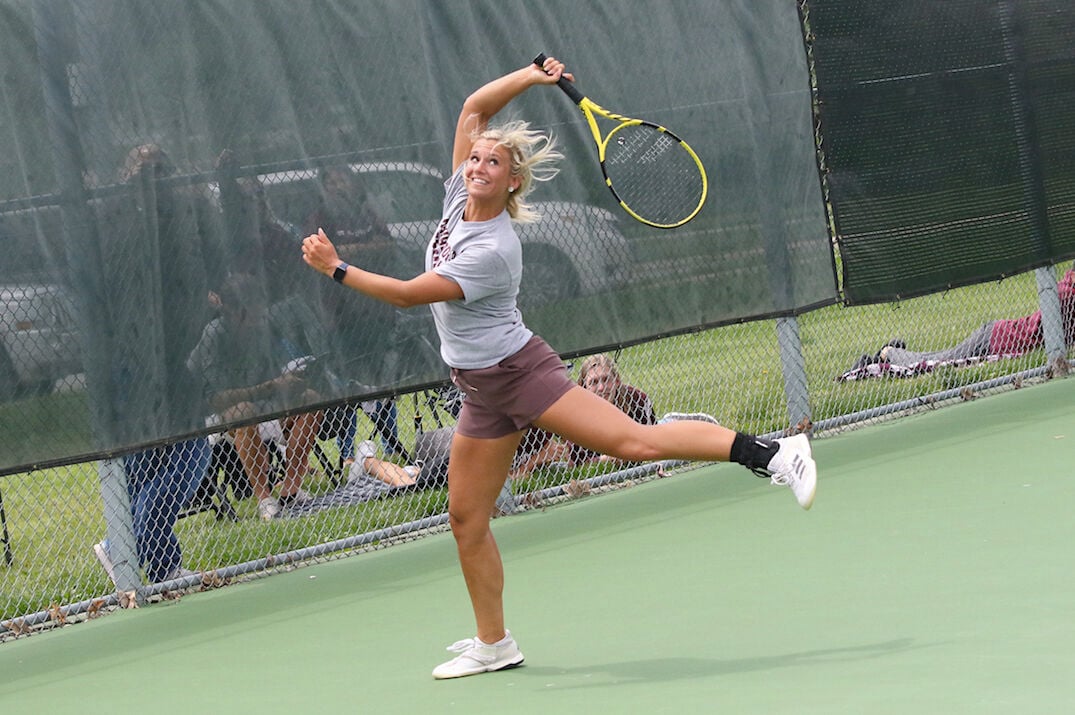 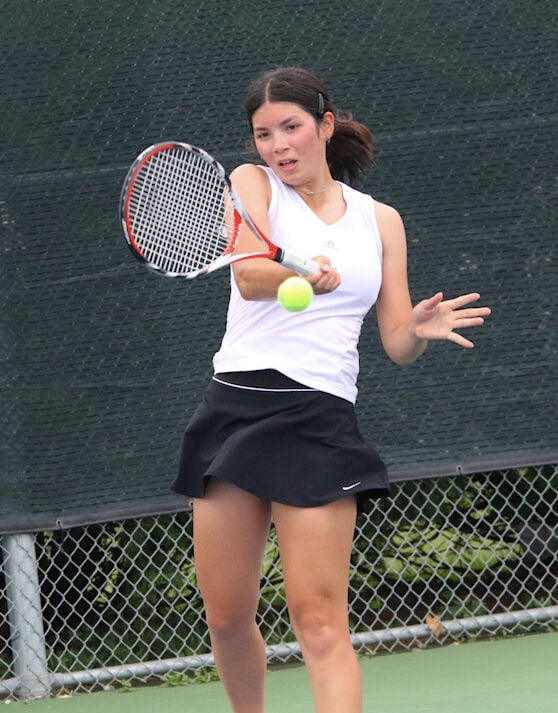 Pella's Emily Blom (left) is swarmed by her teammates after qualifying for state.

PELLA — The rain stayed away on Wednesday as area girls were at Caldwell Park playing for a chance to earn a state bid as individuals. In the end two singles and one doubles team would punch their ticket on Wednesday with Pella freshman Emily Blom winning the regional title against Pella Christian sophomore Katy Roose, who also qualified for state, while PC teammates Megan Kramer and Kelly Van Wyk took second place.

Blom started as the number two seed in singles play and dominated her way to the finals three straight wins while only surrendering three games.

Meanwhile on the other side of the bracket, Roose started her run with a 6-0, 6-1 win before meeting top-seeded Olivia Maasdam of Knoxville in the quarterfinals. Roose won a crucial first set in a tiebreaker 7-6 (5) before finishing off the win with a 6-3 advantage in the second set.

Roose advanced to the semifinals where she battled Oskaloosa’s Makenna Schaffner, who had a great run.

Schaffner had to play in a preliminary matchup and was able to pick up three convincing victories while only dropping five games in the process. She would battle Roose for a spot a state.

With the humidity starting to ramp up, the players were starting to feel the fatigue in their third and fourth matches of the day. Roose was able to edge out the first set 6-4 before Schaffner regrouped and came out firing to take the second set 6-2 and force a decisive third set. With everything on the line, both girls battled in the final set with Roose coming away with the 6-3 win to punch her ticket to state.

Roose and Blom battled for the regional title with Blom taking it 6-4, 6-4. The Lady Dutch and Eagles will meet again on Saturday in regional team play with a trip to state as a team on the line.

Meanwhile for Oskaloosa, it was a day full of great play but ultimately heartbreak. Schaffner bounced back in the third place match to win 3-6, 7-6 (5), 1-0 (5).

Oskaloosa’s other singles player Jillian Jennings also started her day in the preliminary round but would pick up wins of 6-1, 6-1 and 6-1, 6-0 on her way to the quarterfinals. She would run out of gas there and fall in a tough 7-6 (3), 6-3 match.

In doubles play, the duos of Presley Blommers and Lucy Roach along with Amanda Fay and Aubree Blanco rolled to the semifinals after both nabbing a pair of wins.

Blommers and Roach met the eventual champions from Grinnell and fell 6-3, 6-1. Fay and Blanco battled PC’s Kramer and Van Wyk.

The Eagle duo entered as the number two seed and picked up a pair of wins to get them to the semifinals. Kramer and Van Wyk would grab the 6-1, 6-3 victory to secure their spot at state before losing in the finals in a three-set burner 4-6, 6-2, 6-2.

Knoxville’s Maasdam and Alyssa Vaske along with Pella’s Alloree Else all went 1-1 with loses in the quarterfinals. In doubles, Pella’s Amelia Poe and Allie Singer, Pella Christian’s Sydney Van Arendonk and Claire Vander Molen and Knoxville’s Josalin McKeever and Jadyn Streigle all lost in the quarterfinals while Pella’s Jade Chapman and Noelle Ruckman and Knoxville’s Kate Schneider and Laila Tiller both lost their first match.

"Overall the girls as a team battled their hearts out and as coaches we couldn’t be more proud of their effort," Oskaloosa head coach Bryan Kime said. "It’s been a long time for girls tennis to get this many girls battling for a chance to go to state this late in the tournament and that’s all you can ask as a coach."