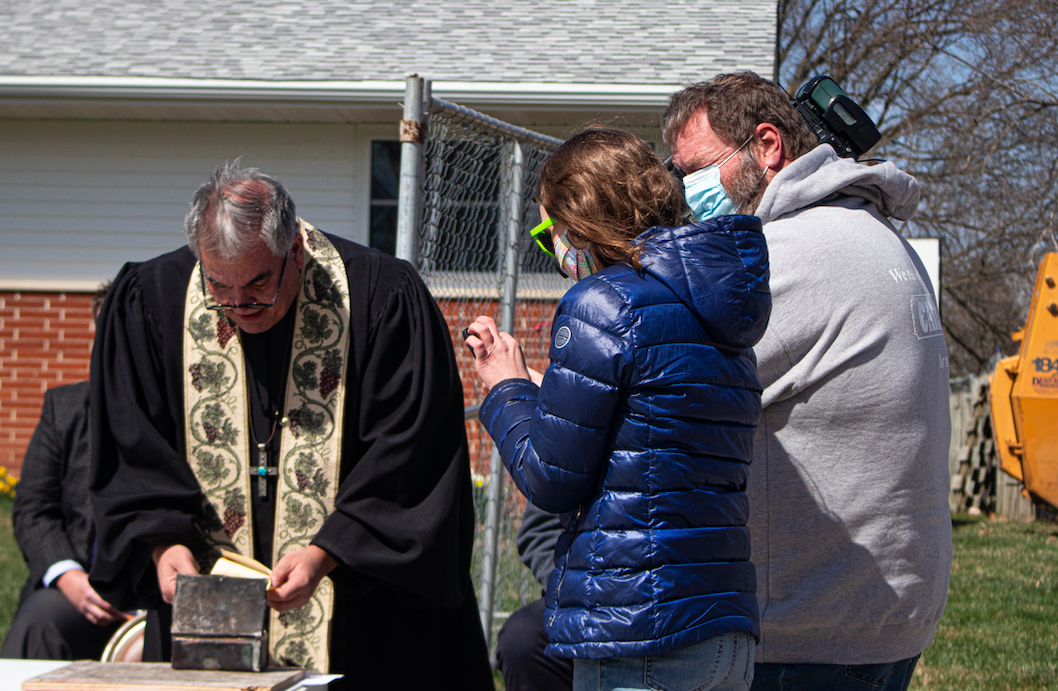 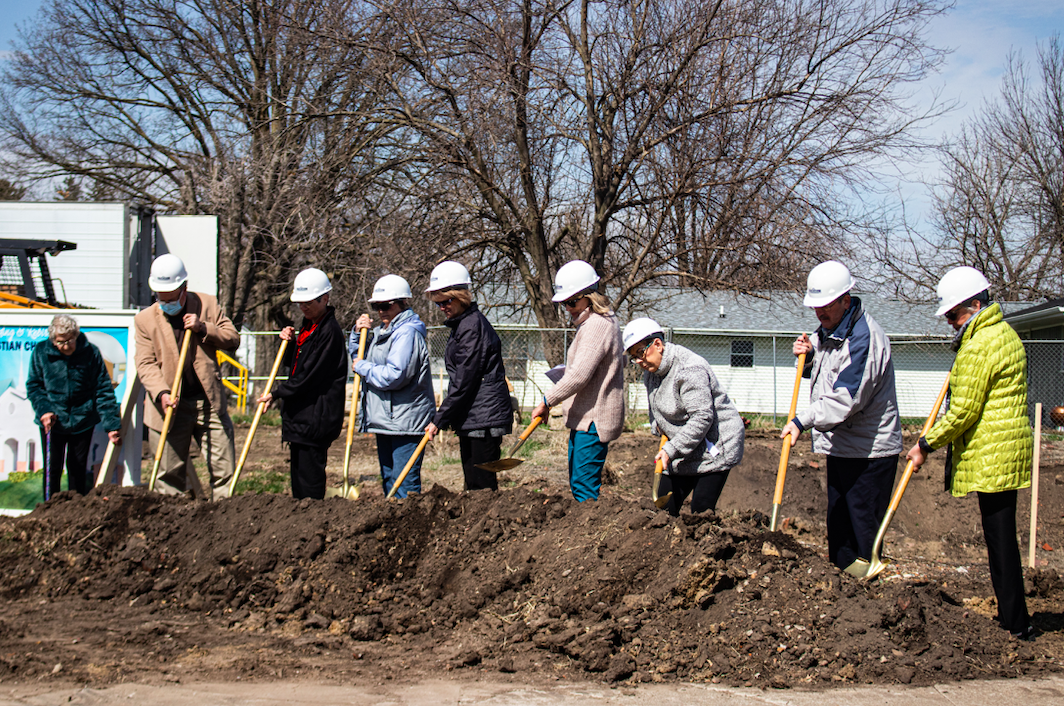 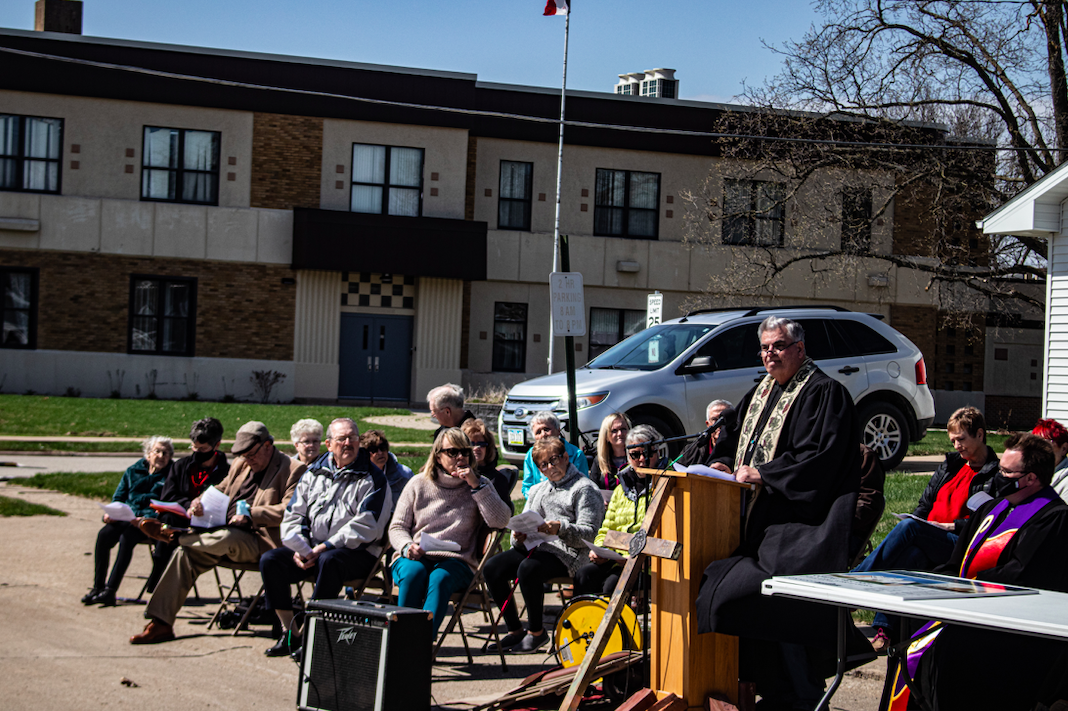 Pastor Don Naftz speaks to the crowd of the time capsule groundbreaking on March 30, 2021.

Pastor Don Naftz speaks to the crowd of the time capsule groundbreaking on March 30, 2021.

PLEASANTVILLE — A year after the Pleasantville Christian Church was destroyed from a fire, a piece of history was unveiled on the exact same grounds.

On Tuesday, the church hosted a groundbreaking ceremony that revealed a 100-year-old metal box, containing various items that were revealed near the end of the event.

The church caught on fire on March 30, 2020, which Pastor Don Naftz said he remembers vividly, as he lived right next to the building.

“I woke up to the sound of a crashing window, and I looked out and there was like a single flame coming out of the basement window,” Naftz said. “... Before we knew it, the whole town was here watching the place burn.”

None of the investigators could pinpoint what made the 120-year-old church burn down, marking the cause of the fire undetermined.

At this time, the church was open for only a few weeks after being shut down from the COVID-19 pandemic. Naftz remembered feeling awestruck from the incident, feeling worried the congregation would come to an end.

“I was watching the smoke from the fire and the bright cinders as they were going into the sky,” he said. “I was thinking about all the thousands and thousands of people that had worshiped in that place for 120 years, and all the memories, the weddings, the funerals, the laughter, the tears, all the gatherings.”

When the demolition crews tore down the old structures, they discovered a capstone from 1900 and pulled it out. The crew eventually noticed a hollowed-out space that contained a metal box

With the groundbreak falling on the same date as the day the church burned down, March 30 was also the same day as Good Tuesday for this year.

“Everyone seems to think all hope is lost on Good Friday, but then there's Easter morning and new life, so that's kind of how I'm putting this big puzzle together,” he said.

He said we'll know what the puzzle will look like when the doors for the new church building will open, which is likely next October.

When the time capsule was opened, Naftz revealed an assortment of items inside of the box, including an edition of Pleasantville News from Sept. 6, 1900, a publication of The Christian Century from Aug. 23, 1900, and an Indian coin.

The groundbreaking also discussed the original building has had a longstanding history in Pleasantville. Miles Jordan, the “founding father” of the church sold the land for $1 back in 1900.

Jordan eventually took the same dollar bill and put in the offering plate during the church’s first Sunday morning worship.

The ground breaking ceremony on Tuesday had various guests speak on the construction of the new church, ranging from community members to religious leaders. In between speeches, guests also read out loud passages from the Bible, such as Ecclesiastes 3 and Psalm 127:1

Rev. Tiff Williams, the Associate Regional Minister of the Christian Church in the Upper Midwest, spoke how Christianity related to the construction of the new building.

“God is going to use this buildings for amazing, wonderful things that we can't even picture yet,” Williams said. “I just want to remind this church and the community that God is never just about the old, we honor the old, but God is about new life.”

Tony Alysworth, the Pleasantville Community School District Superintendent, spoke at the groundbreaking as well, reflecting on the tragedy from the last year and how the rebuilding of the church affects the community.

“The rebuilding and rebirth of the Pleasantville Christian Church has created a positive energy in our community at a time where we greatly need it,” he said. “As your next door neighbor and partner in service, I share the excitement of this beautiful new facility will serve our community as well as your congregation.”