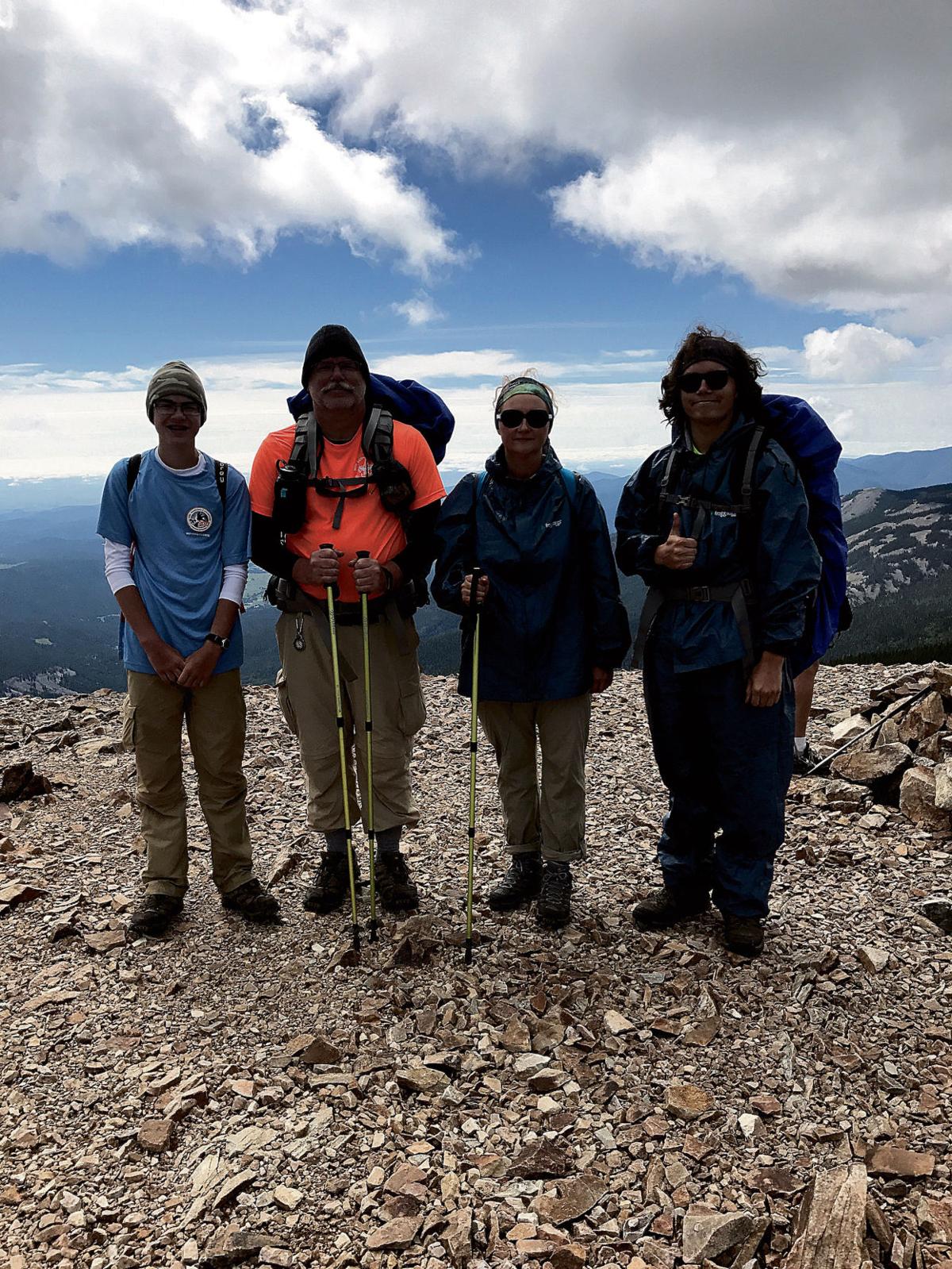 Boy Scout William Leonard, his father Jamie Leonard, Vera Babich, and her son Boy Scout Alexander Nagorny stand atop Mount Baldy, the highest elevation of the Philmont Trek in New Mexico. They backpacked more than 100 miles over 11 days in August. 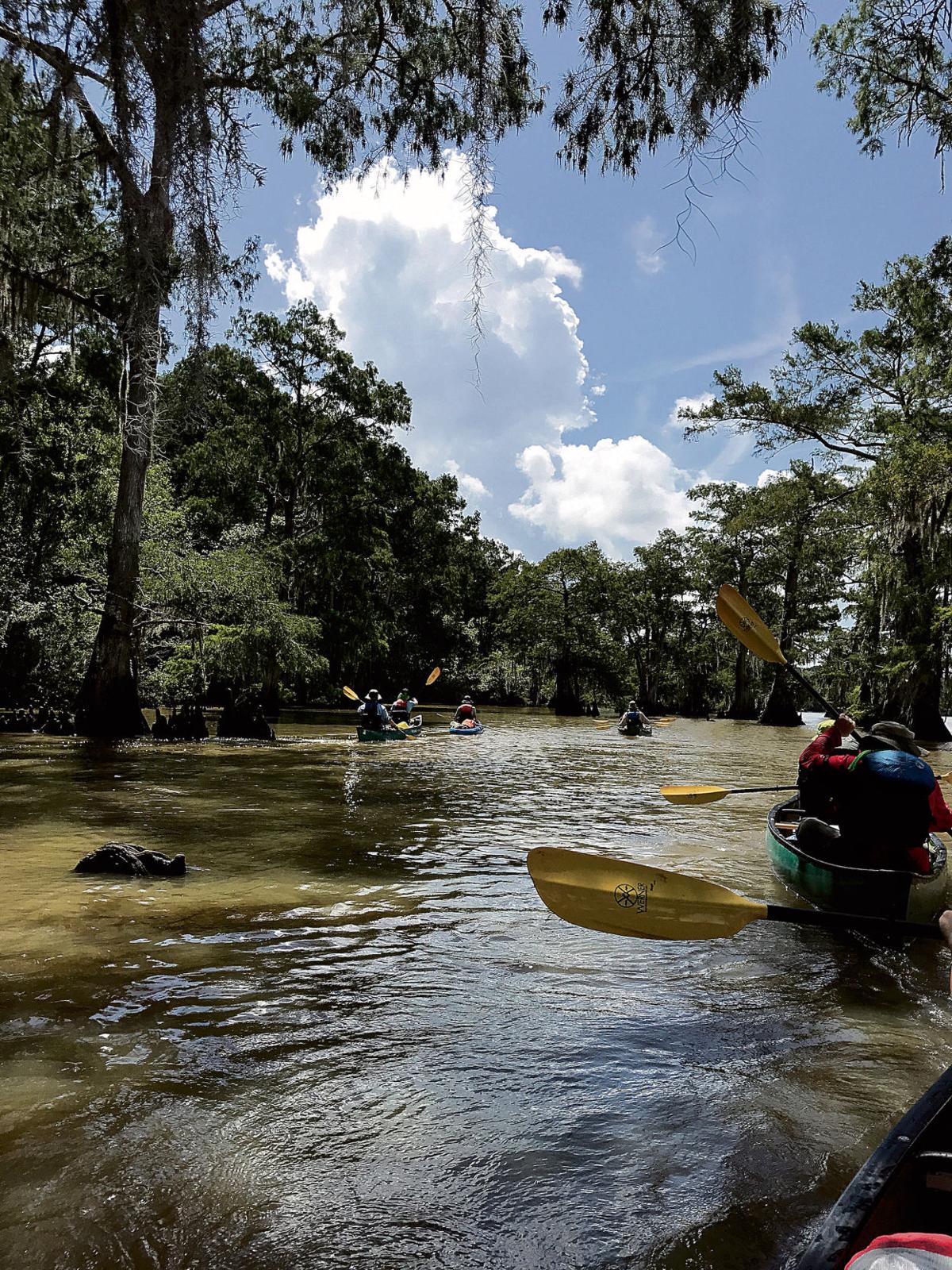 Members of Boy Scout Troop 71 of Oskaloosa canoe through a southern Louisiana swamp during their five-day Swamp Base trek in early July.

Boy Scout William Leonard, his father Jamie Leonard, Vera Babich, and her son Boy Scout Alexander Nagorny stand atop Mount Baldy, the highest elevation of the Philmont Trek in New Mexico. They backpacked more than 100 miles over 11 days in August.

Members of Boy Scout Troop 71 of Oskaloosa canoe through a southern Louisiana swamp during their five-day Swamp Base trek in early July.

OSKALOOSA — Some members of Oskaloosa Boy Scout Troop 71 went on a pair of adventures this past summer.

In July, three Scouts canoed the swamps of south Louisiana. A month later, two members of the troop backpacked the mountains of New Mexico.

The “Swamp Base” trip was a 61.6 mile, five day, four night trek through the Atchafalaya Swamp in southern Louisiana.

“They canoed anywhere from 10 miles a day up to 19 miles a day,” Jamie Leonard said. “I think we calculated it out by the end, and we had roughly 30 hours of actual canoe time.”

The idea for the trip came when William Leonard was reading an issue of Boys Life magazine that had a story about Swamp Base.

“It was on the cover,” William said. “They made it look really cool, with the trees, the canoeing and the scenery. Then I read the story about it, and that piqued it even more with all the stuff you get to do.”

Jamie Leonard said the troop discussed the trip for about six months before ordering the information.

“I got the information for this summer, and had like five days before registration started,” he said. “You call and leave a message with the three dates you'd like to go. They take the calls in the order they were received, and they process those dates.”

The next step was to fill the 11-member crew.

“My goal was three leaders and eight Scouts,” Jamie Leonard said. “We ended up with William, Ean and Gareth from our troop, two Scouts from Troop 11 in Ottumwa, and two Scouts and a dad from Troop 242 in Washington.”

On the first night at Swamp Base, the crew stayed in houseboats after 19 miles of canoeing.

The next morning, they rode on an airboat with a 600 horsepower engine, then canoed to an island, where they slept in hammocks.

Then after two days at an old Scout camp, the crew got up at 4 a.m. so they could canoe to a cove to watch the sun rise.

During the trip, alligators were always in the back of everyone's mind.

“At Swamp Base, you get up in the middle of the night,” Jamie Leonard said. “All you've got on is your headlight and you're canoeing through the swamp. You can hear stuff splashing off to the side, and you're hoping it's moving farther away.”

“I did hook an alligator,” Beenken said. “I got my rod back, but lost a fishing lure. He destroyed my reel.”

Scott Stefanc said that the alligators were more scared of people than the people were of them.

Beenken also earned a reputation for enjoying the local cuisine.

“We had jambalaya the first night, and [Ean] finished off a 16 quart pot,” Jamie Leonard said. “By the time we got to the next stop, they already knew who he was.”

Beenken added, “I liked the Cajun food. After canoeing, I didn't care. If there was food, I was eating it.”

Gareth Stefanc said he learned a lot about his strength during the trip.

“You have a chance of getting injured more than in your daily life here,” he said. “You've got to be brave. You've got to be ready to face any obstacle that comes in your way. The challenge is that it gives me a chance to find out what I'm made of.”

The Philmont trek in New Mexico came about a little quicker.

“We didn't learn about the opportunity to go to Philmont until January of this year,” Jamie Leonard said. “Instead of having the normal couple of years to think about it, we basically had about six to seven months. We ended up going with Troop 2 in Ottumwa. They had some open spots to fill.”

Jamie and William Leonard to the New Mexico trip along with Boy Scout Alexander Nagorny and his mother, Vera Babich.

“That was a little more intense in prepping,” Jamie Leonard said. “March was when we had our first campout. We had four campouts to get ready for Philmont. We had to get out and hike. We didn't care about distance. We had to hike for duration because it's a marathon, not a sprint.”

Philmont was planned as an 11-day, 77-mile trek, although the crew ended up backpacking well over 100 miles through the mountains of New Mexico.

“A lot of Scout units will go camping at state parks or public campgrounds,” Jamie Leonard said. “They'll hike at state parks. You have to take yourself out of your comfort zone and push it to that next level. It's one thing to go out here to Lake Keomah and hike 20 miles around Lake Keomah. It's something totally different to go hike 20 miles and go up as high as 13,000 feet.”

Hiking the mountains with backpacks is a daunting task.

Jamie Leonard explained that the Scouts are basically in charge and do most of the planning on these types of trips.

“What the adults do on these trips is stand at the end of the line and make sure nothing dangerous is being done,” he said. “So, we kind of keep them from walking off the cliff, so to speak. For the most part, the Scouts are in charge and do everything.”

He also explained the process of the Scouts coming together as a cohesive unit, calling it “Forming, storming, norming, performing.”

“Forming, you do once,” he said. “That's when you first get together.”

Nagorny continued, “Storming is like when everybody is angsty. They're tired and they want to go home. Norming is where people are getting the hang of stuff. Performing is where everyone is working together and cooperating.”

Jamie Leonard elaborated on the concept.

“The best example of storming is after the fourth or fifth night of setting up camp in the rain, cooking in the rain, eating in the rain and going to bed in the rain,” he said. “On the other side of Mount Baldy and watching the sun rise, a lot of attitudes changed once they got on top of that mountain and seeing what was the gift of their effort. There's pain and suffering getting there, but here's the reward for that effort.”

The reward came on the final day.

“On our last day we woke up at 3:30 in the morning, and we saw the sunrise on top of the mountain,” Nagorny said. “You could see 360 degrees. We were above the clouds, so you could see the sun rise all around you and see the sky change color. A camera can't capture that.”

The adventures are not over for Troop 71. Next year, they will go to Sea Base, which is in the Florida Keys. The Scouts will spend a week on a deserted island.

— Herald Staff Writer James Jennings can be reached via email at jjennings@oksyherald.com or on Twitter @OskyJames.